When in Marseille, you can’t miss her: Notre Dame de La Garde. Whether you are emerging from St. Charles train station, heading toward the Pharo beaches, or taking an evening stroll around the harbor, she is there. Notre-Dame de La Garde, the Roman-Byzantine Basilica built in 1854, watches incessantly over the city and its inhabitants. Located on the city’s highest hill, after which she is named, Notre Dame is inherent to Marseille’s blue skyline. She remains strikingly beautiful with her dome 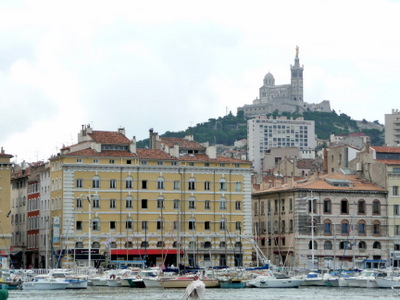 rising up in the sky surmounted by a gilded statue of Mary and her infant seemingly ready to soar. A surreal, yet reassuring sight in this city that explodes with energy.

Although the construction of ‘la bonne mere,’ as Marseillais affectionately refer to her, began in the 19th century, and the spot where she stands has a long history. It all began in 1214 when a hermit built a small chapel. Little did he know that three centuries later, the site would acquire a major strategic role. Indeed! To defend against a potential invasion by Charles V of Spain, King Francois 1st built a fortress around the chapel. Le ‘Fort Notre-Dame de la Grace,‘ as it was called, attracted an ever increasing flow of worshipers. Sailors, in particular, ritually climbed up the hill to pray for a safe journey or drop ex-votos (a votive offering to a saint or divinity; an ongoing tradition). From the 16th century, the popularity of the chapel 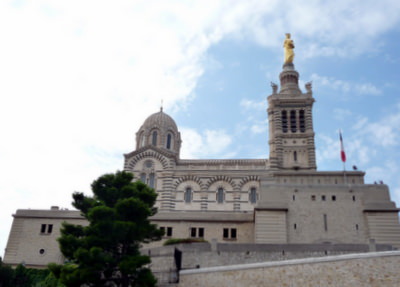 grew. To accommodate the increasing growth of visitors, it was decided to build a basilica.

Work was launched in 1853 under the direction of a 24 year-old unknown architect, Jacques-Henri Esperandieu, from Nimes. Ambitious and imaginative, the young man wished to break away from the gothic styles and create a ‘modern,’ place of worship. Placing all his passion and artistic talent to the project, he designed a Romano-Byzantine edifice with multi-colored striped stones, mosaics and gold-leaf ornaments.  Furthermore, to honor the site’s history, he laid the foundation upon those of King François Ier’s fort. Unfortunately, he died long before the basilica was completed in 1899.

The high points of your visit to Notre Dame de La Garde:

The edifice consists of two parts: the crypt on the lower level, and the sanctuary on the upper level.

The crypt: Crossing the drawbridge beneath the bell tower, you will enter the recently renovated crypt.  Don’t be put off by the dimness as a superb statue of 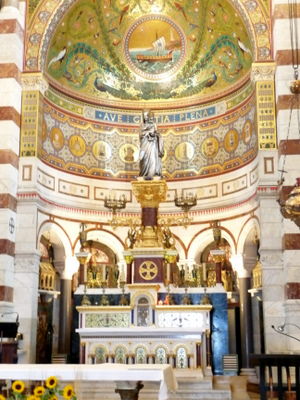 the Virgin with a Bouquet standing on a gold and blue pedestal illuminates the room.  You will also admire a multicolored crucifix dating from the 16th century and a marble ‘mater dolorosa.’ Look at the monumental bronze doors — they weigh close to 2,000 kilograms and lead to the upper sanctuary – don’t worry, you won’t have to push them open. Revolving doors have been installed.

The sanctuary: The floor and ceiling mosaics with their gold background depicting olives, vines and exotic birds, as well as the stained glass windows and the multicolored marbles will take your breathe away. When you contemplate the solid silver sculpture of the “Virgin and Child,” keep in mind that it took five years for its creator – silversmith Jean-Baptiste Chanuel – to hammer the metal plates.

The gilded statue: The guilded statue was designed by sculptor Eugene Lequesne and executed by Ateliers Christofle in Paris. Measuring 36 feet high, it arrived in Marseille by train and was installed in 1870. It retains its place of prominence atop the basillica and is re-gilded every 25 years. If you spend enough time in the city, you may find yourself turning toward the statue throughout the day just to make sure that ‘she’ is keeping an eye on you. 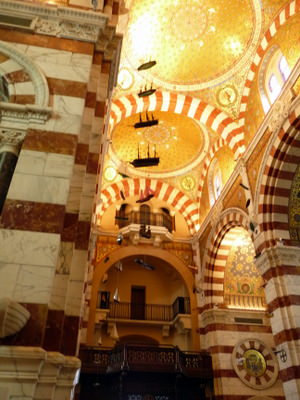 The maritime connections are everywhere – in the anchor motifs or the boat models hanging from the ceiling and displayed in glass cases. Furthermore, ex-votos exhibited on the walls, hung between the supports of the nave or engraved in the stones tell fascinating stories of miracles or life-changing events.

The scars: On the northern façade, you will notice bullet scars, remnants of the 1944 liberation war. If you reach Notre-Dame de La Garde on foot, you’ll pass by the Place du Colonel Edon. The remains of the Jeanne d’Arc tank evoke the assault.

The view: The terraces of the basilica offer an unforgettable panoramic view of Marseille, the bay, the Chateau d’If (that Francois the 1st had built at the same as the fortress) and the Frioul Islands.

Unmissable, largely thanks to the audacity of a young architect, Notre-Dame de La Garde is more than an architectural masterpiece. Part lighthouse, part fortress, part sacred place of pilgrimage, La Bonne Mere, tells the story of Marseille. Furthermore, what is most amazing is that independent of their cultural origin or spiritual belief all Marseillais revere Notre Dame de La Garde.

You can get to Notre-Dame by taking the bus number 60 at the Old Port or the Petit Train on the Quai des Belges. If you are driving, you will find parking lots at the top. The most athletic among you may want to hike. It will take about one hour and a half from the Old Port or the Pharo Park.  The climb can be hard at times. But, you can take advantage of a pause to take fantastic pictures.

Written by Brigitte Aflalo-Calderon  and photos by Bill Fogarty for EuropeUpClose.com