Mystery and legend swirl around Rennes-le-Chateau, a medieval village in the Languedoc-Roussillon region of southwestern France. Visitors come by the thousands, curious to see the home of ancient family codes, a secret society, hidden treasure, and religious conspiracies. I go for the incredible views of the landscape and, yes, the intrigue of it all. 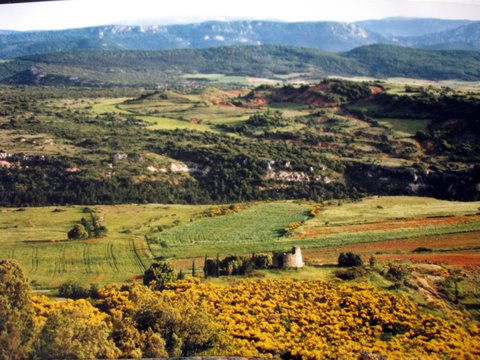 The area is known for its beauty, with deep canyons, rivers, limestone outcroppings and plateaus, wooded hillsides, and underground caves. Rennes-le-Chateau overlooks the Aude River valley and the distant Pyrenees from its perch on a hilltop. The medieval village has a long history. It began as a prehistoric settlement, became a Roman colony, was taken over by the Visigoths in the 6th and 7th centuries, and it may now be French, but since the popularity of Holy Blood, Holy Grail and The DaVinci Code, it’s been ruled by tourists.

The mystery began in the 18th century, when the village priest was given a secret document, which he hid during the revolution in a pillar inside the church. He had a stone slab engraved with what appears to be a coded message. A century later, Berenger Saunière, the parish priest, apparently found something that got him digging in the cemetery. Soon he was spending quantities of money, repairing the crumbling church and town. Rumor has it that he revealed what he found to church authorities, and he was paid to keep it quiet. 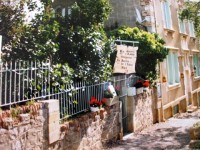 Stories abound. Maybe Saunière found evidence of Jesus’ marriage to Mary Magdalene, or the Holy Grail, or a horde of gold. Maybe it was all related to the missing, hidden treasures of the Cathars or the Knights Templar. When Saunière died in 1917, he left his secrets with his housekeeper and she kept them to her death in 1953.

Holy Blood, Holy Grail, by Henry Lincoln, espoused the Jesus-Magdalene bloodline theory and was followed by other books around the theme. The DaVinci Code brought it world-wide attention.  A bookstore in the village, the Atelier Empreinte, has many books on the subject, and the museum shows artifacts and some of the tales spun around the complex story. 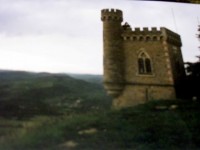 Some background reading makes a tour of the place most interesting; it helps to know the clues to look for when you tour the church, the gardens, Villa Bethania (where Saunière lived), and the Magdala Tower which stands at the edge of the hill. These are the sites visitors come for. There isn’t much else in town, other than the bookstore, a wine shop, a few places to buy souvenirs, and a studio where amazing handmade candles are produced.

There are two main restaurants. Table de l’Abbe, set in the lovely garden of the Berenger Saunière Center, is excellent. We were impressed with the perfectly prepared, delicious meals, served at outdoor tables. The friendly host is familiar with Rennes-le-Chateau history and pseudo-history, and is happy to discuss them. The other good eatery is Restaurant Amarante, serving a limited menu of traditional foods such as lamb with thyme and duck confit. There is a small, select wine list.

The best place to stay in the area is in the nearby village of Couiza. Chateau des Ducs de Joyeuses is a beautifully furnished hotel of 23 rooms and 12 suites in a remodeled 16th century chateau. It also has a noted restaurant.

The nearest train station and airport are 40 kilometers away, in Carcassonne. From there you can take a small train or bus to Couiza and then a taxi to Rennes-le-Chateau. Or you can do as we did, and drive a rental car. That allows more leeway for exploring the ever-fascinating countryside.

Much has been made of 'Shepherdess no temptation ... ' - which so-called code is a meaningless jumble of words ... and the pentagaon that is presented as the basis for Poussin's painting. - No one has seen that the symbol on Parchment One draws through the heads of the shepherds and that on P2 the symbol is Poussin's Monogram 'N Pousin' , that doubles to name the place of the treasure 'st NAZ (aire)'. Poussin, Sauniere (in his Stations of the Cross) and Sir William St Clair in the Rosslyn ceiling panels all point to ... the Church of St Nazaire Et Celse at Rennes les Bains. - Further, some one in that church also knows; the evidence is there for all to see. Geoffrey. 'The Secret Church, the Treasure of Rennes-le-Chateau'. geoffreymorgan@mypost office.co.uk

Hello. I have written a book on the mystery of Rennes-le-Chateau, published by Arcatrans Inc in 2002-namely The Paradise Co-ordinates. There you will see a solution. Also on my web site you can read articles that have also been published in The Rennes Alchemist and the Rennes Observer. I am presesently researching more and my findings todate are in the latest Rennes Observer magazine. A magical place, with views to the Pyrenees, of caverns, gorges and ruined castles.

Wonderful, informative article on one of France's most magical destinations.

Rennes-le-Chateau is a fascinating place. I can still remember my first visit. Have been back about 30 times now.

My website has a lot more information about Rennes-le-Chateau, the church, and Sauniere's clues. There are also lots of images for you to browse through taken in the church and the surrounding areas.