The Twin Otter banks hard and within seconds is skimming low over the sea. The fat tires bounce on hard, still-wet sand, and I breathe again. I step onto the biggest runway I’ve ever seen — the Cockle Strand — and my romance with the Outer Hebrides Isle of Barra, Scotland begins. 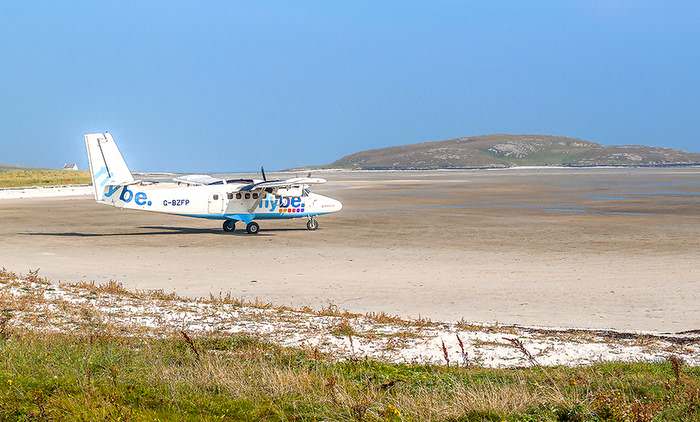 In 2015, Barra Airport was voted #4 of the world’s ten most spectacular approaches (PrivateFly.com). The sand is white when dry, but the runway is always damp

The airport on the Isle of Barra is the only one in the world with regular flights that follow a schedule determined by the tides. This afternoon the usual crowd lined up along the beach claps and waves, as I mentally delete a major bucket list item. On this sunny day I’ve flown past Barra’s low mountains girdled with turquoise seas and white sand, and spied a castle in a town’s wide bay.

I’m now used to the wee rental cars and single-track roads, and meander south along Barra’s rugged east coast avoiding sheep and cyclists. My husband and I are longing to slake our thirst with good Scottish ale after a full day of travel by train and plane from Oban. 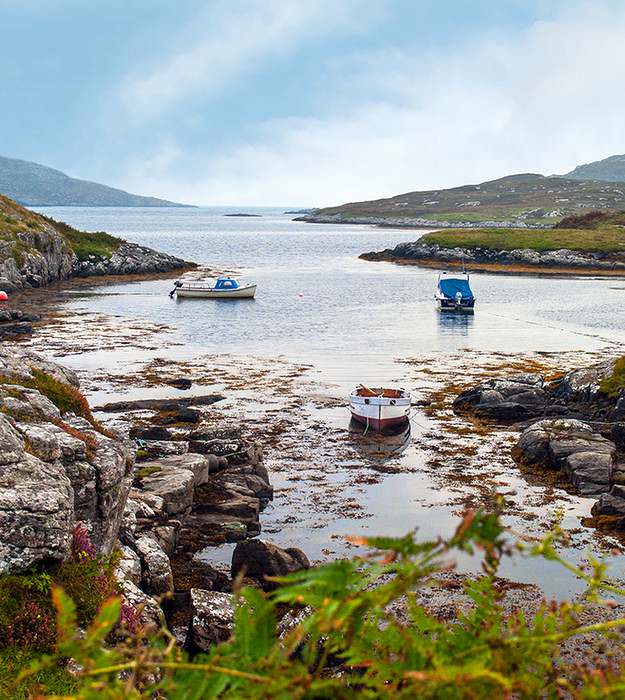 Barra’s east coast is indented with picturesque rocky bays like Earsary, but has no beaches south of the airport. The marine cloud dispersed late in the morning.

Our 1880 hotel, dripping with tartan, perches above Castlebay, the main village on the island. Its traditional bar and restaurant has a million-dollar view that is framed with fuchsias in bloom although it’s mid-September. I choose the window seat as the sun slides into the North Atlantic and focus beyond the palm trees. The sea sparkles, and treeless slopes encircle the bay.

Further south in the haze lie the Bishop’s Isles and Vatersay, which is on our exploration list. But my eye is drawn to Kisimul Castle on an island that dominates the bay — it’s been the stronghold of the McNeils since 1040CE, a clan famous for its piracy and lawlessness after the Vikings withdrew, leaving only their sagas. 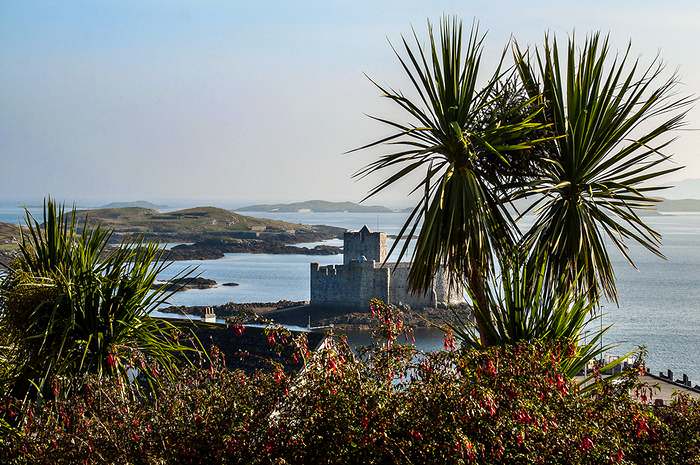 The early evening light enriches the view from The Castlebay Hotel bar of the sheltered harbour with Kisimul Castle on its rocky island.

“How did the castle’s inhabitants survive a siege surrounded by salt water?” my husband asks, ever the military man. “There’s a fresh water spring within the castle.” I say, looking up from the guide book. “Most of today’s castle dates from the 1400s but its history is ancient: some say it guarded Barra as far back as the Iron Age. It’s the best-preserved castle in the Outer Hebrides and open to the public via boat.” I sip my Scottish beer.

A low marine cloud drapes our view next morning but looks like lifting after we finish another full Scottish breakfast including haggis, which I happen to like. We retrace yesterday’s steps and, as we pass the airport, the runway is beneath the waves. Eoligarry, a smidge further north and east, is Compton MacKenzie’s burial place in a 12th century chapel’s churchyard. The sun breaks through while we perch on a tiny harbour breakwater and savor the salty breeze. Looking inland, the sandy fertile plain called machair is full of sheep. 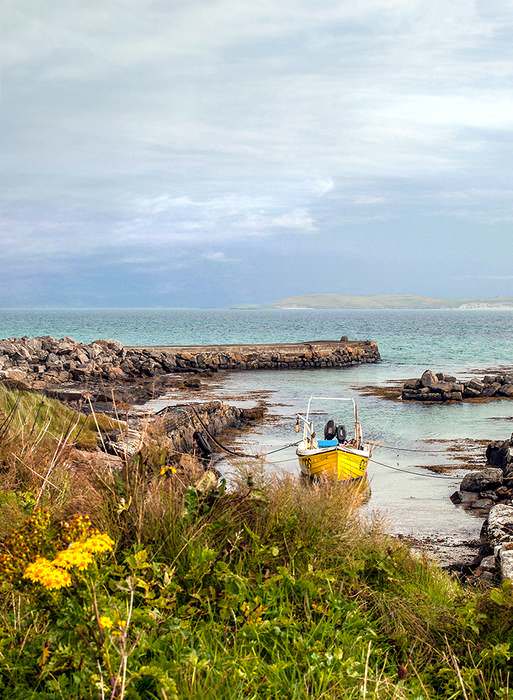 The tiny harbour of Eoligarry north of the airport. Curling round on the far side of the breakwater is a deserted white sand, crescent beach.

The surging North Atlantic storms ravage the exposed west coasts of the Western Isles, northwest of Scotland. Small Barra and tiny Vatersay lie at their southern tip and their outer coastline is a wild and remote area to a city girl like me. Rocky headlands cup the long crescent beaches where the endless surf curls onto the strand. Sand dunes separate the sea from a scatter of cottages, behind which the land rises to small mountains splashed with heather and golden bracken. A walk on the long white beaches here is a must and I meet more cattle than people. 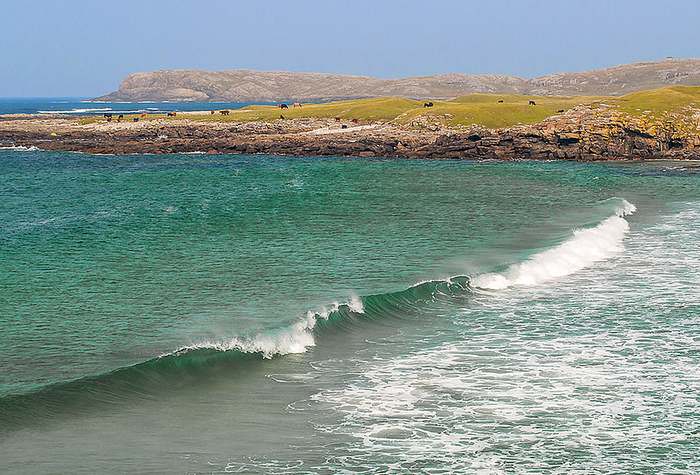 Barra’s Atlantic coast offers tourists long walks on sandy beaches. This is Allasdale or Seal Bay looking north where seals haul out and cattle graze on the point.

Lunch and the Isle of Vatersay are calling, so we return to Castlebay on Barra’s only “main” road as it heads east beneath Ben Tangaval, the mountain that forms the island’s south-western tip. 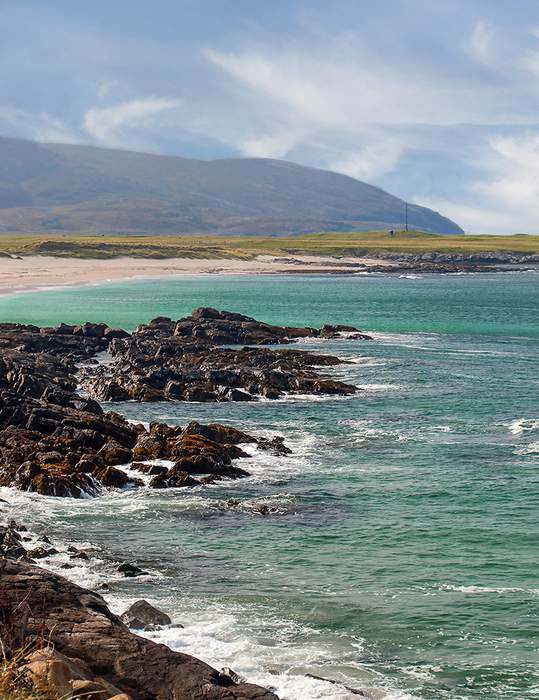 Looking south from Seal Bay at the bulk of Ben Tangaval, accessible only to hikers.

On the way to Vatersay’s causeway is a strikingly modern memorial dedicated to the islanders who served mostly in the navy and lost their lives in the two wars. Here too is the viewpoint to capture the panorama of Ben Heaval, Barra’s highest mountain, with Castlebay and Kisimul Castle nestling below. 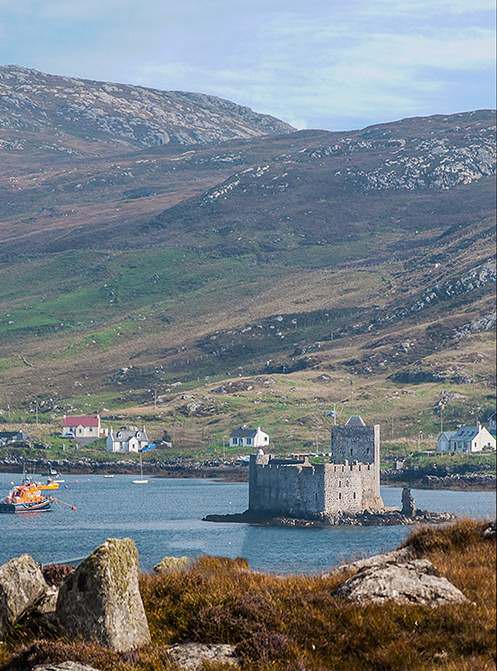 Kisimul Castle seen from the road to Vatersay

Not until 1990 was Vatersay linked to Barra. Before then, a small ferry transported people, but cattle swam across the sound tied to small boats. Roads on Vatersay are short, strewn with sheep, and often have grass growing down the middle. Sometimes the lanes simply peter out and often I find it difficult to turn the car around. 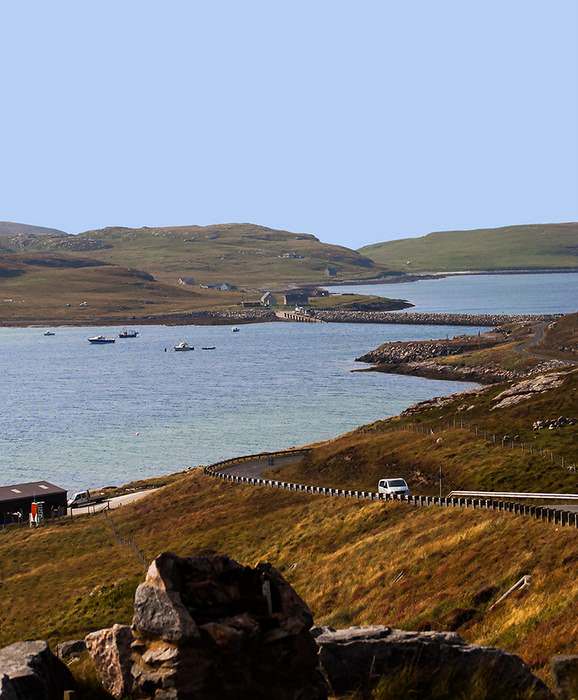 Treeless Vatersay  and the modern causeway linking the islands across the sound.

The major reason to visit Vatersay is its magnificent apple-core beaches, one on the east side and one facing the Atlantic, separated by a neck of sand dunes. Both are considered some of the finest unspoiled beaches in the Hebrides. Vatersay Bay, looking east, is more sheltered and small fishboats tug at their buoys in a fresh breeze. At the south end are a few cottages and abandoned boats pulled above the tide line. 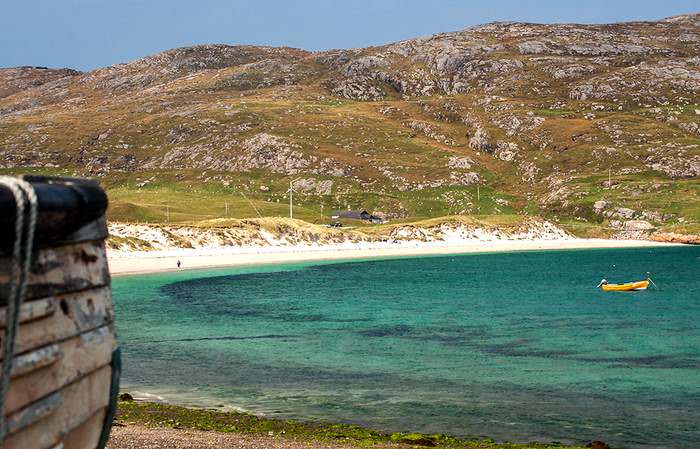 Vatersay Bay is the east-facing beach on the neck of dunes that separates it from the Atlantic. The tiny island is unspoiled and can easily be seen in a couple of hours including a shoreline walk.

I clamber over the grassy dunes between the two beaches and stop at the Annie Jane monument on the high point. In Siar Bay the restless Atlantic looks benign today under blue skies, but I can imagine the night in 1853 when storm force winds raised towering waves. 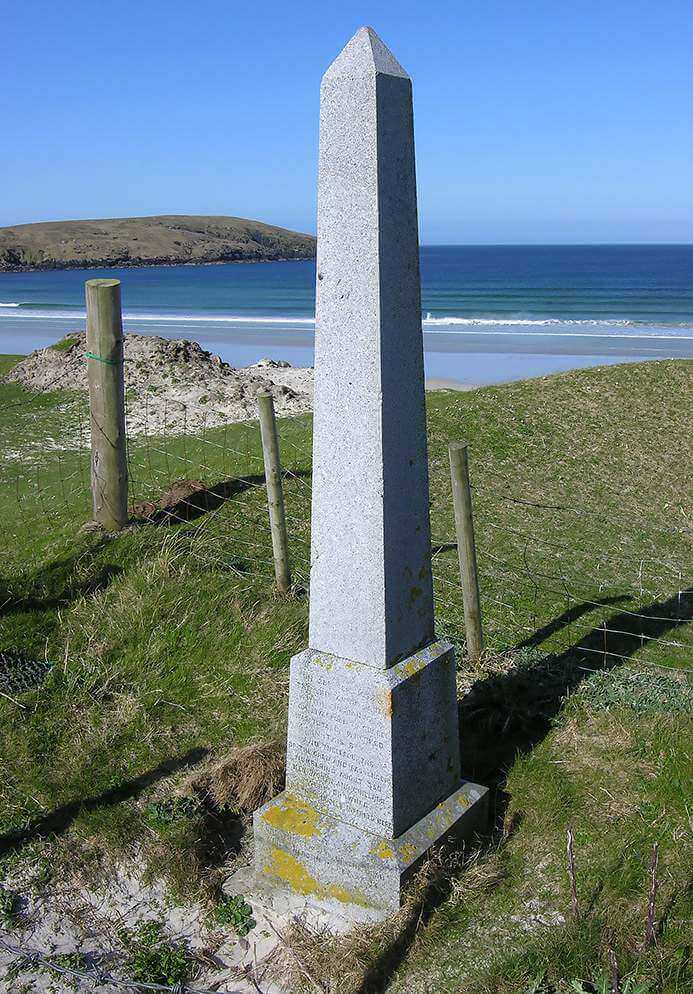 The Atlantic beach, Siar Bay, and the memorial to the victims of the sinking of the Annie Jane on top of the dunes dividing Vatersay’s two beaches. Courtesy: Undiscovered Scotland

The brig, Annie Jane, bound for Quebec with five hundred souls, foundered on the rocks below. The 393 victims lie buried beneath my feet. Today the white sandy crescent is achingly beautiful and empty as I walk alone but for my thoughts. 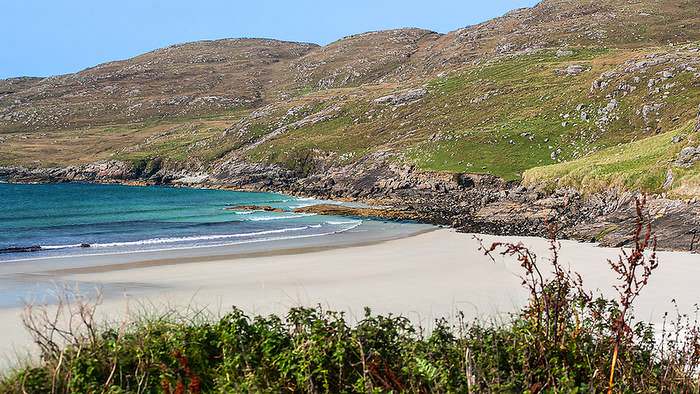 Siar Bay looking north from the dunes to the lower slopes of Ben Heishival.Less than a mile away on the side of Vatersay Bay, an RAF Catalina flying boat on a training mission from Oban crashed into Ben Heishival in May, 1944; six crew survived but three were killed.

I stop at the roadside memorial and find pieces of the plane left scattered near the water’s edge to remind visitors of the tragedy. 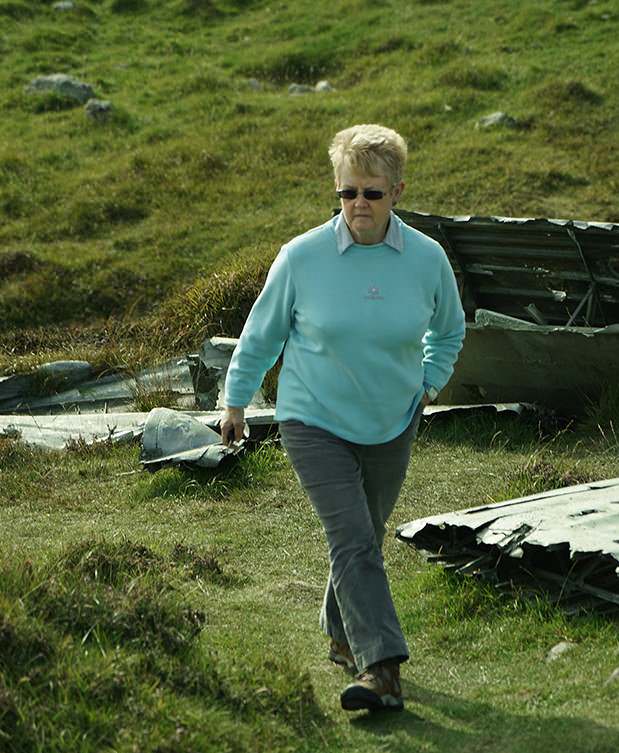 The author amidst the wreckage of the RAF Catalina flying boat left where it crashed in May 1944 on a training flight. © James S. Ferguson 2014

Tired but hungry, my husband and I dine on fresh seafood caught that morning. The seafood in Scotland has delighted our taste buds for the past two weeks — langoustines and scallops, halibut and crab. I choose a different species every evening. We linger over a wee dram of whisky and chat about the mellow colors that enrich these islands in the fall, the lack of tourists, and the abundance and depth of history, both ancient and recent. “I wish we could stay another night,” James says. “There’s more to see.”

Dreams follow dinner quickly, and we’re up early to catch the ferry to Eriskay where Bonnie Prince Charlie landed in 1745, and where more stories and photography await me in the little-traveled Uists. 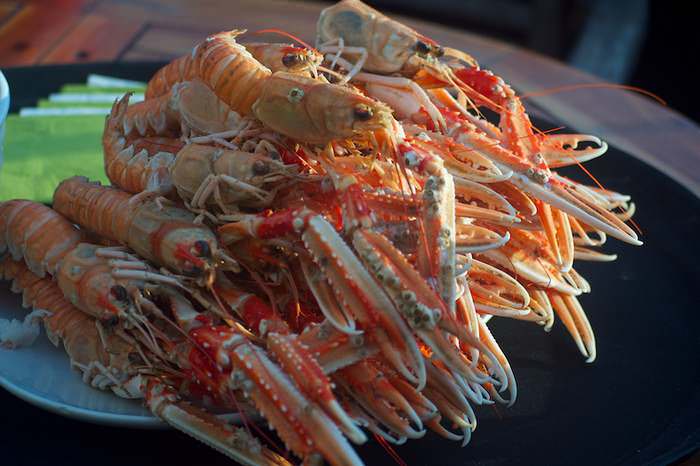 The Hebrides attract top chefs who prepare delicious seafood dishes — freshly-caught langoustines were one of my favorites.

Find the Best Pricing on Isle of Barra Hotels Here

Written by Julie H. Ferguson and ©Photos by Pharos 2014 (Unless otherwise noted) for EuropeUpClose.com