I stand on the deserted beach of Marathon, Greece, a long crescent of stones and sand. Surf spills over the pebbles, spray bursts like a shower of gold-dust reflecting the dazzling Greek sun. On this beach, with the surf hissing over pebbles red as blood and white as bone, I hear the wind moaning like the voices of the ancient dead, as though the spirits still linger in the shade of the pine groves. Here, in the stillness of the autumn afternoon, I remember the story of the young men of ancient Attica. 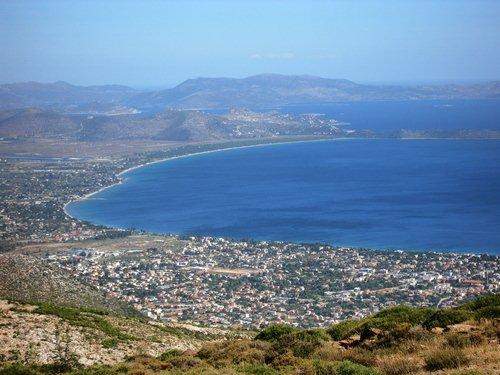 A view of Marathon from Pendeli

The History of Marathon, Greece

It is 490 BC. The Persian fleet is anchored offshore. Hopelessly outnumbered, the 9,000 Athenian and 1,000 Plataeans face the formidable army of 25,000 Persians. According to the legend, as the invasion begins, the shepherd god, Pan, miraculously intervenes. Black clouds obscure the sun as the Athenians launch their attack causing the Persians to “panic”, from which the term is derived. Confused by the commotion and the swift retaliation of the Attic warriors, the Persians hastily retreat and are defeated. This is Greece’s first battle for democracy. The second was to follow in 480 BC when the Persian fleet was defeated at Salamis, one of the most significant battles in history. 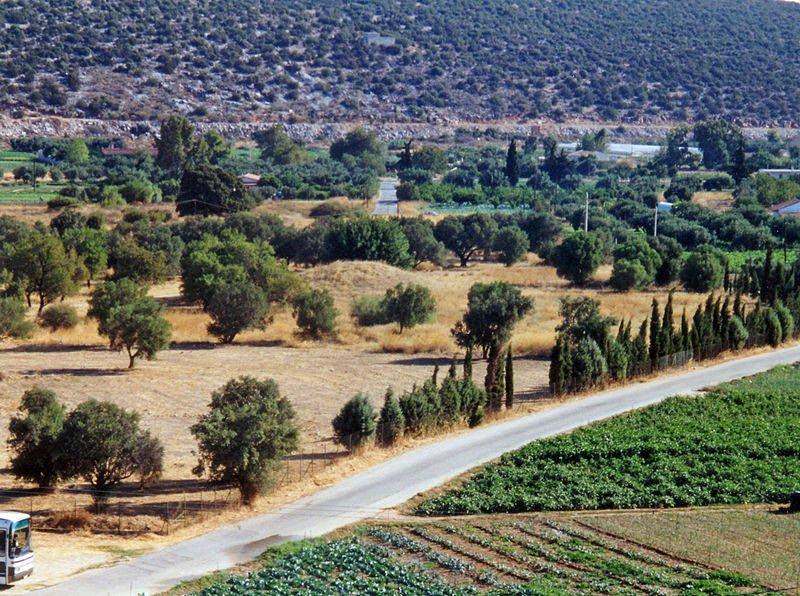 The mound of the Plateans

A short walk from the beach, in a pastoral setting surrounded by a grove of trees, 190 young men of Attica are buried where they fell, heaped in a common grave mound, guarded by a marble relief of the Warrior of Marathon. The tumulus is located five kms from Marathon village. The high mound is blanketed with a carpet of grass, surrounded by what was once the battlefield that covered the swampy ground between the beach and Mt. Pentilikon. Several miles inland there is an archaeological museum devoted to artifacts found in the area. Nearby is the grave mound of the eleven Plataeans who died in the battle, including that of a ten year old boy, the youngest fatality of that fateful day 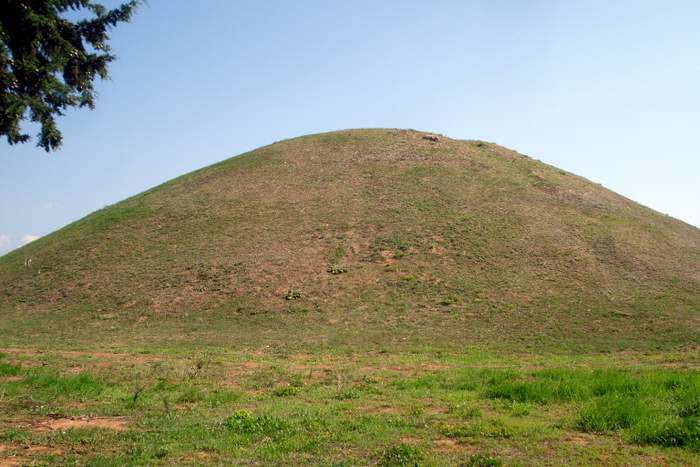 The grave of 190 Attica warriors

I first visited Marathon, Greece back in 1984. The tomb was covered with a blanket of red poppies. I climbed to the top of it. Now there is a winding path surrounding it where visitors can stroll under the shade of the trees. A sign says: ‘No climbing allowed!’ 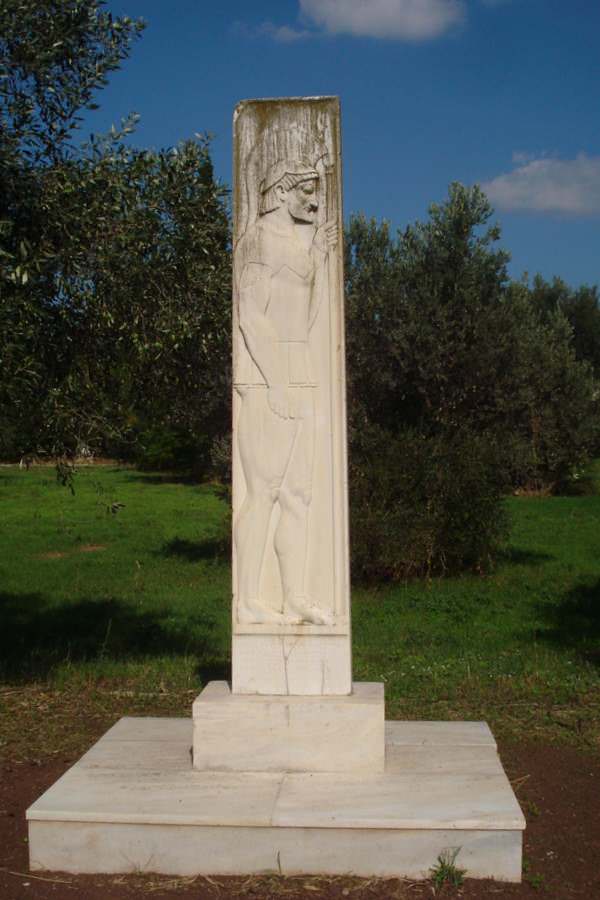 The name “Marathon” comes from the herb fennel. It is believed that the town was named this because of the abundance of fennel plants in the area. The name of the long-distance endurance race comes from the legend of Pheidippides, a young Greek soldier and runner who was sent from the battle-field to Athens to announce the Greek’s victory. 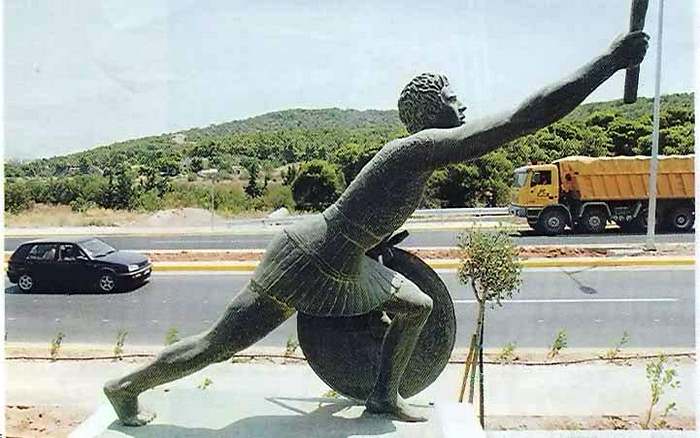 Statue of Pheidippides along the Marathon Road

Shortly before the battle took place, the Athenians knowing they were vastly outnumbered, had sent Pheidippides, a soldier and experienced runner, to Sparta to ask for help. The 140 mile course from Athens to Sparta was rugged and mountainous. Pheidippides ran the course in only 36 hours, but the Spartans agreed to help only once the moon was full, due to religious laws. So Pheidippides ran back to Athens to deliver the disappointing news and immediately afterwards join the small Athenian army to march to the plains of Marathon. 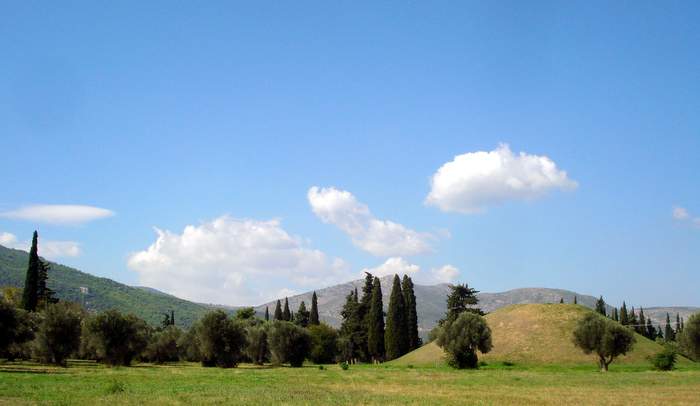 By the end of that day the Persians were defeated. Pheidippides was again summoned to run the 26 miles back to Athens to deliver news of the victory. In spite of fatigue after his recent run to Sparta and having fought all morning in heavy armour, the brave young soldier took the challenge. Pushing himself beyond the limits of human endurance, he ran back to Athens to deliver the message. After shouting “Nike!” (“Victory!”) he collapsed and died of exhaustion. In his honour, to this day the Athenian “marathon” begins from the ancient battle site.

The starting point of the Athens marathon is up a long, tree-lined road, clearly marked. The new “Preservation of the Marathon” museum is located here and across the road is the Olympic stadium entrance with the starting gate for all marathons run in Greece. The new museum is mainly a record in photos and writing of all the marathons since the first modern Olympics in 1896 when a Greek shepherd, Louis Spiridon, who was known for his powers of endurance, won his first marathon. In a show of indescribable enthusiasm, 60,000 spectators and the King of Greece welcomed him in the Panathenaic Stadium as if he was the new Pheidippides. 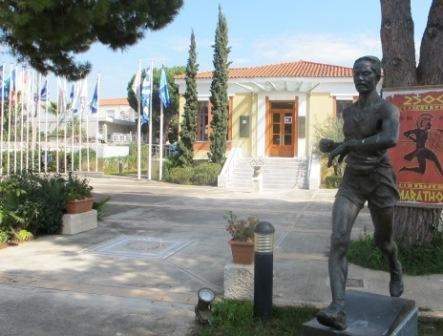 Entrance to the Marathon Museum

There is a gallery of women runners too. The first woman to run a marathon was from Syros. She was known as “Melpomene” and she ran 40 k. of the 1896 marathon the day after it was officially run. She had been denied permission to run in the official race so she decided to run alone. She asked a priest to pray for her protection but he refused, saying he would only bless official athletes. Her finishing time was 5.30 hrs. Today hundreds of women participate in marathons which are held not only in Greece but world-wide.

The first modern Olympic Games in 1896 introduced the marathon race of 40,000 meters (24.85 miles) Later the distance was changed to 26.2 miles. To this day the Athens marathon follows the approximate route that Pheidippides ran from Marathon to Athens finishing at the Panathanaic Olympic Stadium. The first twelve kilometres are flat. The next nineteen kilometres are more demanding, some of it uphill. Then there is a final eleven kilometres downhill towards the finish line. The Athens Marathon is held every year in November. 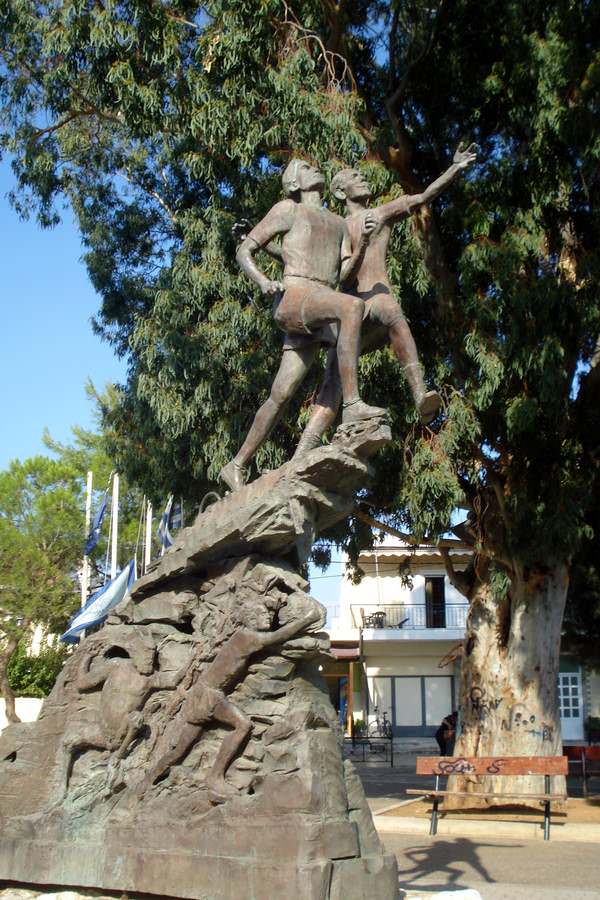 Back at the grove, as I stand below the grave mound, I think of the young warriors of Attica and admire their bravery. I hear the voices of the dead, as though their spirits still linger in the shadows. The ghosts of Marathon are here, their victory paean rising from the sea and carried by the wind through the pine trees just as it did centuries ago

If you go to Marathon, Greece:

Marathon is 42 kilometers north of Athens,  an hour’s bus trip. Buses leave hourly from Station 29, Mavromateon St near the National Archaeological Museum in Athens. Check bus info for the locations such as Tymvos (the tomb) which is 5 kms from Marathon village and other sites in the Marathon area. 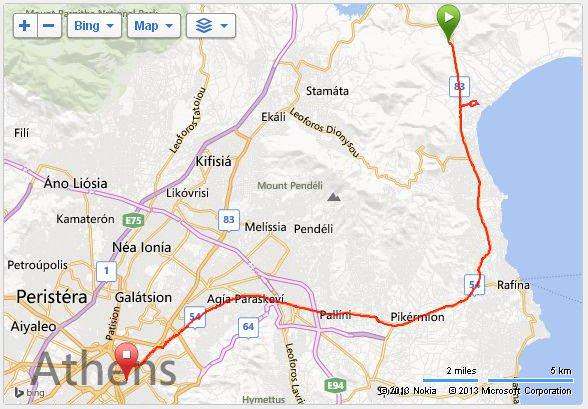 Quite an amazing achievement. I wonder if anyone has written about her?

Great information. I was really impressed with the woman runner - what determination!

I'm glad you enjoyed this story. If you've never visited Marathon it's certain worth taking a day trip out there, especially if you happen to enjoy running marathons.

Very interesting story, and I particularly like the statues of the runners, especially that of Pheidippides. Thanks.

Thank you Marilyn. I wonder how many other people didn't know the true story of the original 'marathon' race?