Plan Your Visit to Mainz, Germany

I was fortunate to visit a friend who lives in Mainz so he acted as my tour guide as we explored this architecturally rich and scenic city; from the Baroque Gautor Gate built in 1670 that was once part of the city walls, to the Copper Mountain Terrace, an upscale residential 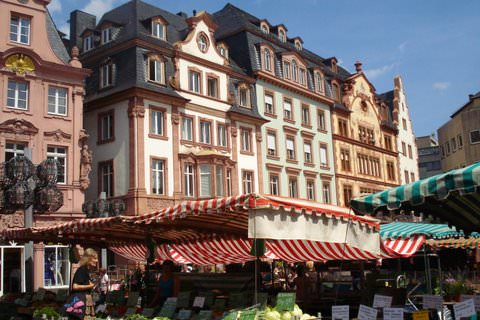 area where people grow their own grapes to make sparkling wine. And, of course, there is the modern shopping district of downtown where the rich archaeological finds of the past blend with the new cityscape. I especially enjoyed Mainz’s Old Town with its pretty squares and half-timbered houses and unique shops.

Imagine shopping in an ancient Roman temple dedicated to Isis and the Great Mother. In Mainz, Germany a modern shopping mall is built right over such a place. The archaeological ruins of Taberna 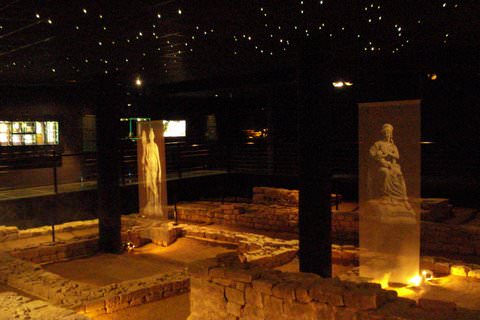 Archaeologica are part of the attraction of the busy mall discovered when excavations were made revealing remains of two temples celebrating ancient female divinities: Isis the Egyptian Goddess of Fertility and Mater Magna, or Great Mother, a goddess who was favored by soldiers.

Mainz history goes back to when the Romans built a fort here around the 1st century BC. The name “Mainz” may have derived from the Roman name for the river, Main. 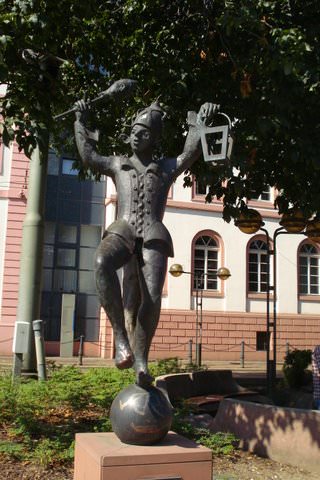 But until the 20th century, it was referred to in English as Mayence. Besides this temple, there are other ruins nearby including the site of the original Roman citadel where there is a cenotaph raised by legionaries to commemorate their hero Drusus. Among the sites are the ruins of an aqueduct and theatre. Some of the artifacts of Roman times can be viewed in the Museum of Antike Schiffahrt and Mainz’s most important museum, the Landesmuseum.

Although much of Mainz was destroyed during the war, it has retained much of its beautiful old architecture. It’s the largest city and capital of Rhineland-Palatinate, located on the west bank of the river Rhine about 40 kilometers northeast of Frankfurt.

Mainz is home to a Carnival, the Mainzer Fastnacht, originating in the 19th century. We walked around the carnival square where there’s a statue of Friedrich von Schiller, a 19th-century writer and poet for whom the Square is named. The Carnival is held on Rosenmontag (Rose Monday), before Ash Wednesday and is one of the city’s biggest celebrations. 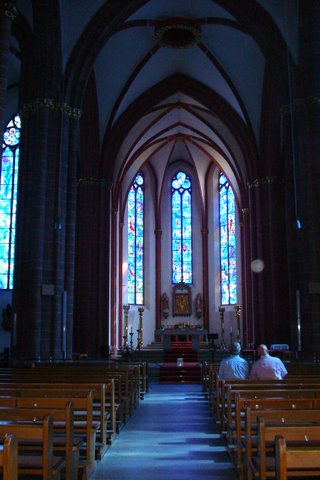 Once the main ecclesiastical center north of the Alps, Mainz is noted for its Baroque churches. The Church of St. Stephan, a Gothic structure built between 1290 and 1338 is one of Mainz’s most visited attractions.  Be sure and go inside to see the magnificent stained-glass windows depicting scenes from the Old Testament by exiled Russian-Jewish artist Marc Chagall. They bathe the Gothic hall with luminous blue light. Chagall intended his work to be a contribution to Jewish-German reconciliation and chose St. Stephan due to his friendship with Monsignor Klaus Mayer who was then presiding priest of the church.

The immense Cathedral of Saint Martin is nearly 1000 years old, built in Romanesque style. It has six individual pipe organs inside all accessed from one large console. The Augustine Church with its magnificent Baroque facade was built originally as a hermit’s monastery in the mid 1700s and is now a seminary church noted for its beautiful interior with ceiling frescoes that provide insights into the life of St Augustine. The Catholic Church of St. Peter is one of the most important Baroque buildings in the city. Originally a monastery, the present church was built between 1740 and 1756 by architect Johann Valentin Thoman. Inside you’ll see amazing Baroque altars and ceiling frescoes. Christuskirche is an evangelical church in an Italian High Renaissance style. It serves as a music venue as well as a church. The old Gothic Church of St. Christoph dates to the 9th century. It contains an original 15th-century baptismal font.  Johannes Gutenberg, inventor of the first printing press was baptized here.

New computer technology including the current rage for e-books, has brought about a new Printing Revolution, and it seems that traditional printing presses will soon be extinct. When I was an aspiring young journalist fresh out of high school working in 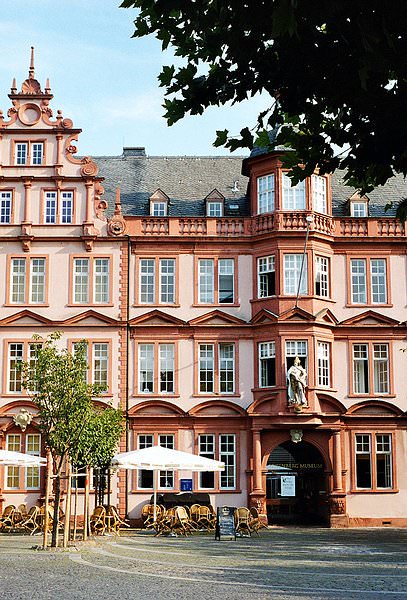 a  newspaper editorial department, one of my tasks was to run errands to the composing room.  I was in awe of the type-setters who sat behind their massive machines preparing the print for that day’s newspaper. My most prized possession was an old Underwood typewriter. The printed word has always meant a lot to me, so when I visited Mainz, Germany recently, I made a point of visiting the Gutenberg Museum to have a look at the world’s first printing press. It was in Mainz in the early 1450’s  that the first European books were printed using moveable type.

A German goldsmith, printer and publisher, Johannes Gutenberg invented the mechanical moveable type printing press and this invention started the first Printing Revolution. His initial major work was the Gutenberg Bible (known as the 42-line Bible). 180 of them were printed on paper and vellum, though only 21 copies survive, two of them in the museum. There is also a replica of Gutenberg’s printing press, rebuilt according to woodcuts from the 15th and 16th century. 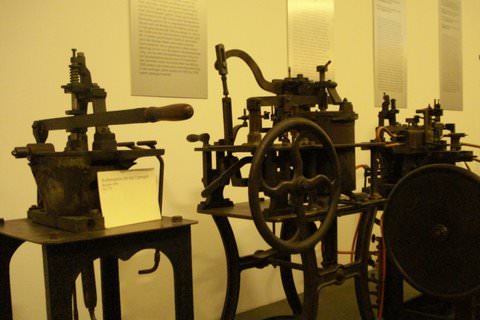 Located in the heart of Mainz’s historic inner city, right next to an impressive Romanesque cathedral, the Museum was founded in 1900 to honour the inventor and to exhibit the writing and printing techniques of as many different culture as possible. Many of the objects and presses were donated by publishers and manufacturers. Later the museum expanded to include book art, graphics and other types of printing, plus modern artists books.

This museum is a must-see for anyone interested in books and printing. The Gutenberg Museum displays two copies of the Bible and Shuelburgh Bible as well as other publications 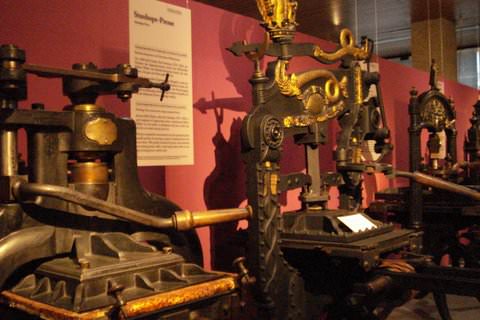 representing the history of the printed word. Here you see the very earliest typesetting machines and books that were published centuries ago including the Gutenberg Bible. There is also a small library open to the public that contains a collection of books from the 17th to the 20th centuries.

After you’ve looked at the fascinating displays, be sure and visit the Museum’s gift shop where you’ll find an interesting array of unique souvenirs to purchase as mementos of your visit.

There are several interesting day-trips out of Mainz. The region is rich in variety with idyllic river scenery, historical towns and picturesque villages. The Rhineland- 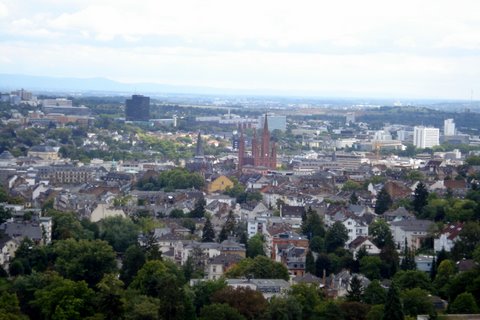 Palatinate is famous as a wine region and the romantic castles along the river and was named by UNESCO as one of the most beautiful landscapes and world heritage sites.

My friend and I visited nearby Wiesbaden, a city with elegant architecture and idyllic squares. We took a bus to ride the Neroberg Mountain Railway, a water-driven elevated train, the largest one in Europe. The train climbs up Neroberg Mountain to a beautiful park where we had magnificent views of the entire city of Wiesbaden. We later walked down the hill, stopping to 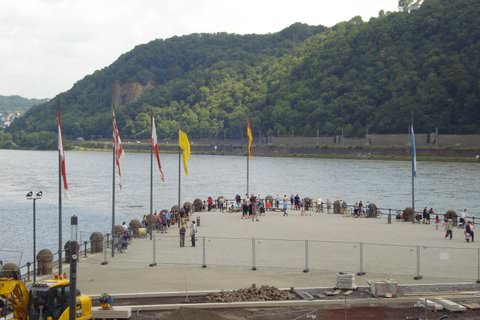 visit an impressive Russian chapel, built in 1855.Next to the chapel, which has tall gold onion spires, is the largest Russian cemetery in Western Europe.

Another day we took the train to historic Koblenz where the Rhine and  Mosel Rivers meet. After walking the lovely riverside promenade, our special treat was a boat trip up the Rhine to view the many castles perched on the hills.

The name derives from the Celtic sun-god Mogon, the Romans called it "The golden town". Mainz is located sout west of Frankfurt not north east. The carnival season starts already 11 November, with a 6 day climax before Ash Wednesday, which is mostly in February. And the cathedral is more than 1000 years old. Glad you liked it here!

It's sad when such beautiful cities like this have been destroyed in wars - but I'm glad to see parts of historical Mainz is still alive. It's beautiful.