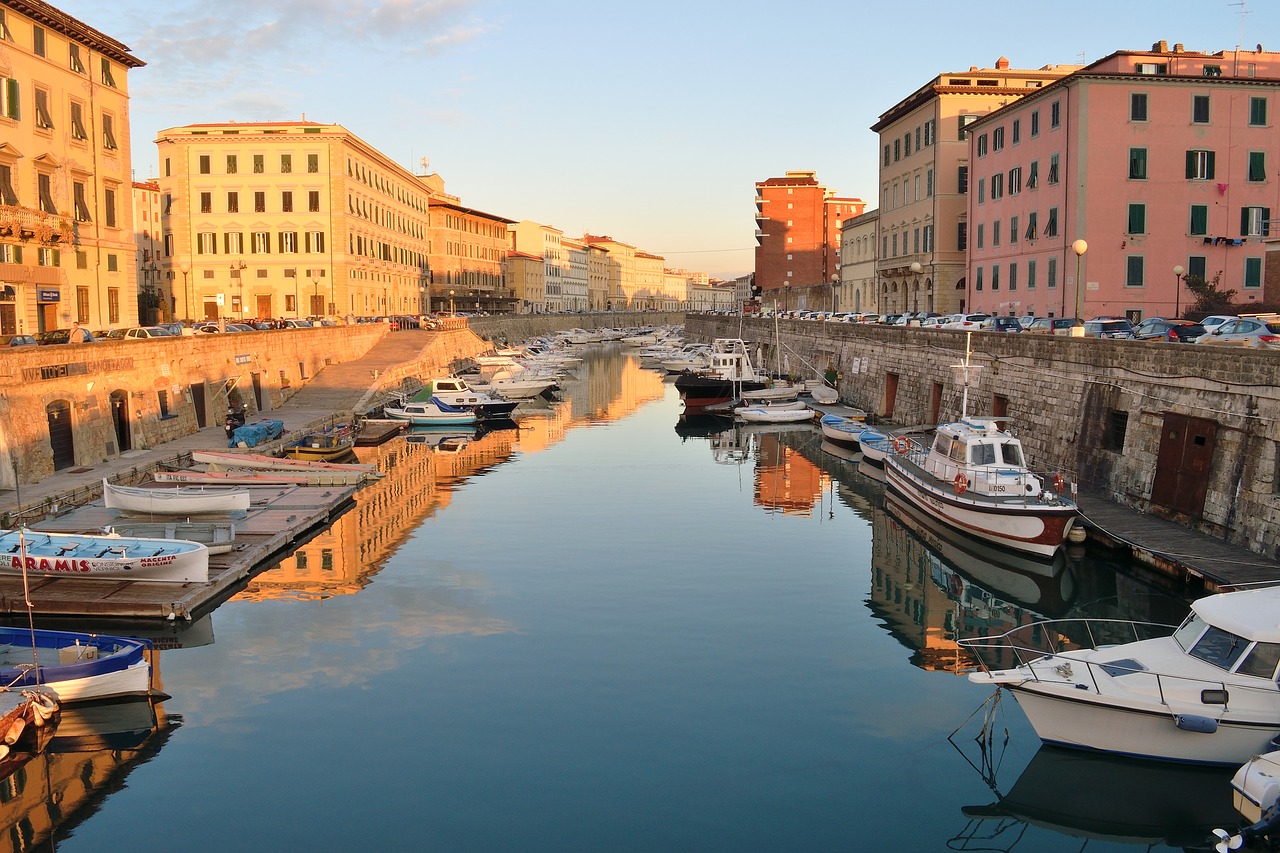 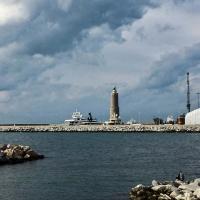 Livorno is a lovely Italian city with an ugly English name – Leghorn (an English-language garbling of the city’s Italian moniker). Who wants to stop and see “Leghorn”?  Almost none of the 3.5 million tourists who pass through Livorno every year while boarding ferry boats and cruise ships bound for somewhere else.

Their loss is the gain of the few adventurous travelers who take the time to savor this Tuscan port, with its fascinating history, spacious piazzas, gracious architecture, and hospitable people.  Visitors can explore medieval forts, browse modern museums, sail on Venetian-style canals, relax on seafront beaches, and enjoy authentic food without fighting hoards of foreign tourists.

“We are focusing on experiential tourism,” explains a local tourism official.  “Travelers who come here can see how Italians really live.”    But keep in mind that the Livornesi are not “typical”:  the population is more open, tolerant, and cosmopolitan than its counterparts elsewhere in Tuscany.

“We are not Tuscans in the classic sense,” claims the tourism director.  “You see this in our churches as well as our kitchens.” 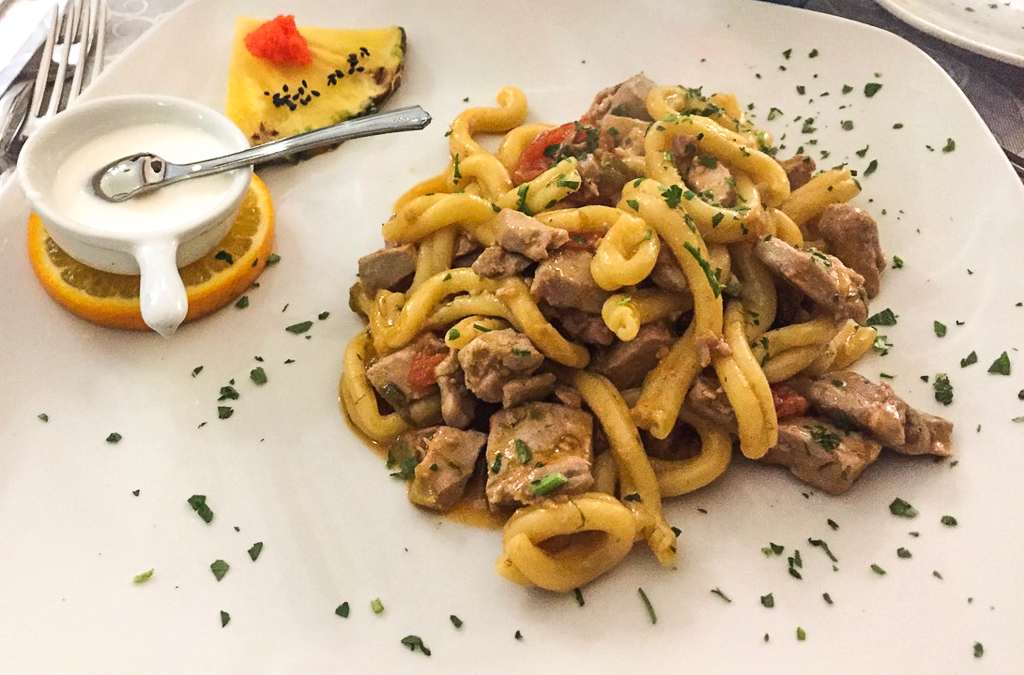 The reasons are centuries in the making. Despite traces of Etruscan and even Iron Age inhabitants, Livorno was a tiny fishing village for millennia.  Nearby Pisa, with its port, had ruled the region.  In 1284 the Genovesi defeated the Pisani in the Battle of Meloria off the coast of Livorno; this marked the beginning of Pisa’s decline.  One of the first things a proud Livornese will show you is the Torre della Meloria (tower of Meloria) built to celebrate Pisa’s defeat. 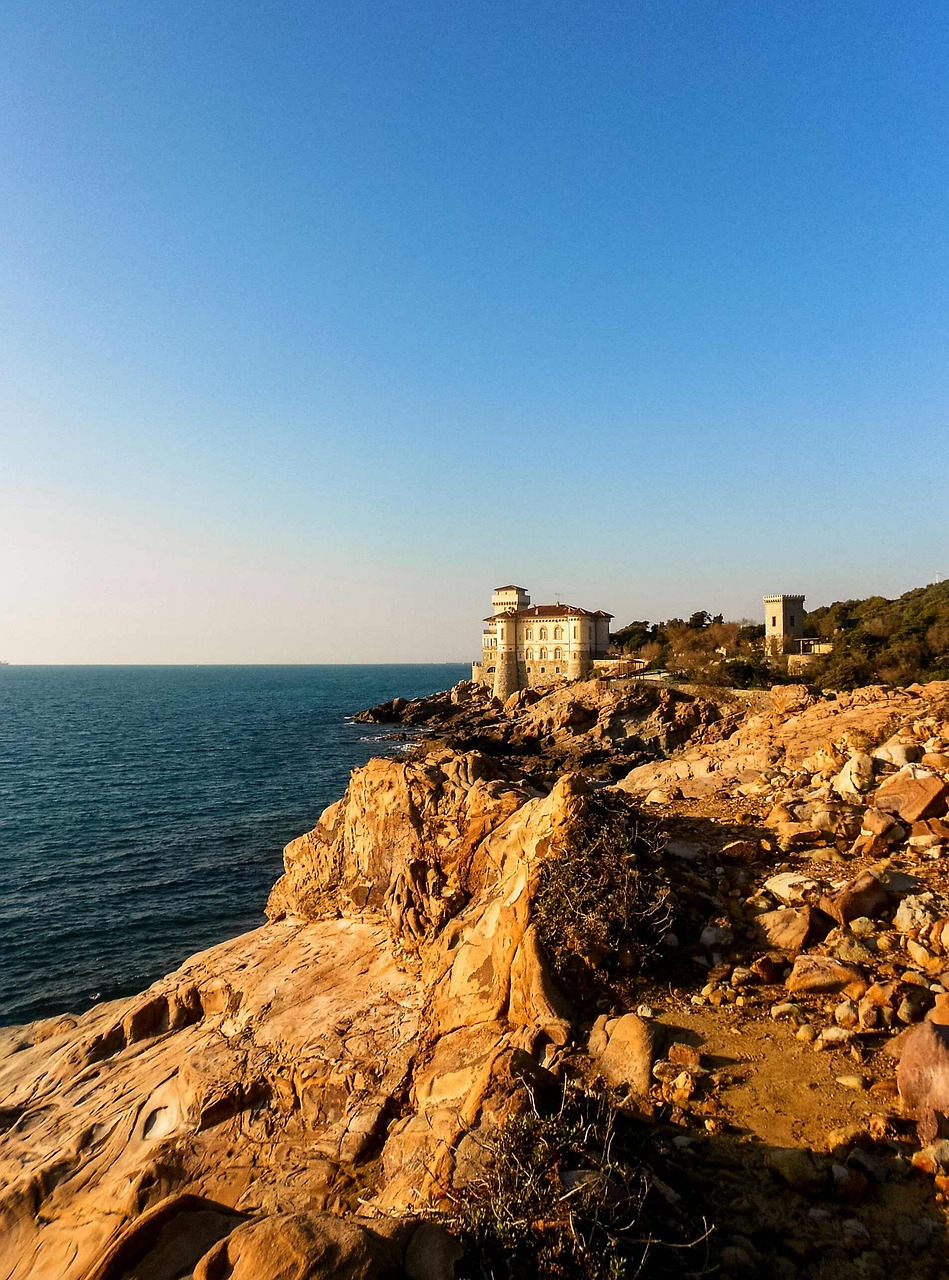 The Torre (it’s built on rocks offshore) is visible from the Scoglio della Regina (the Queen’s Rock), named for a queen of Etruria (a region of Tuscany in the 1800s).  Maria Luisa di Borbone was a Spanish-born noble who had the building constructed in 1846 so she could “take the waters” in privacy.   Other bathing stations followed, making Livorno a popular place for wealthy summer visitors.  This early tourism wasn’t seen as bathing per se but as breathing iodine-rich air from the sea.  Poets Percy Shelley and Lord Byron both came here, as well as Italian artists and musicians, and Shelley drowned not far from Livorno in 1822.

Today there are 11 thalasso centers in the city, active during the warm months.  Lo Scoglio is not one of them; it was transformed into a marine research center that opened in June 2017.

Terrazza Mascagni – The Window to the Sea

South of Lo Scoglio is Terrazza Mascagni, a huge checkered piazza of 8,700 square meters along the seaside.  The space, constructed in 1925, is perfect for walking, jogging, skateboarding, skating, soccer-playing, sea-ing, and being seen.  The Livornesi call this their window to the sea, and locals throng the Terrazza at almost any hour of the day. Summer music festivals are held here, and a New Year’s Eve celebration draws a band, singers, entertainment, and local crowds.

At the northern end of the Terrazza is the Aquarium of Livorno, the largest in Tuscany.  It first opened in 1937 but was renovated and re-opened in 2010, boasting 33 tanks, 3,000 marine species, a restaurant, and special exhibits and programs that change regularly. One fascinating tour offers a “behind the scenes” look at how an aquarium works and what biologists do to maintain it.  Tickets should be ordered in advance. 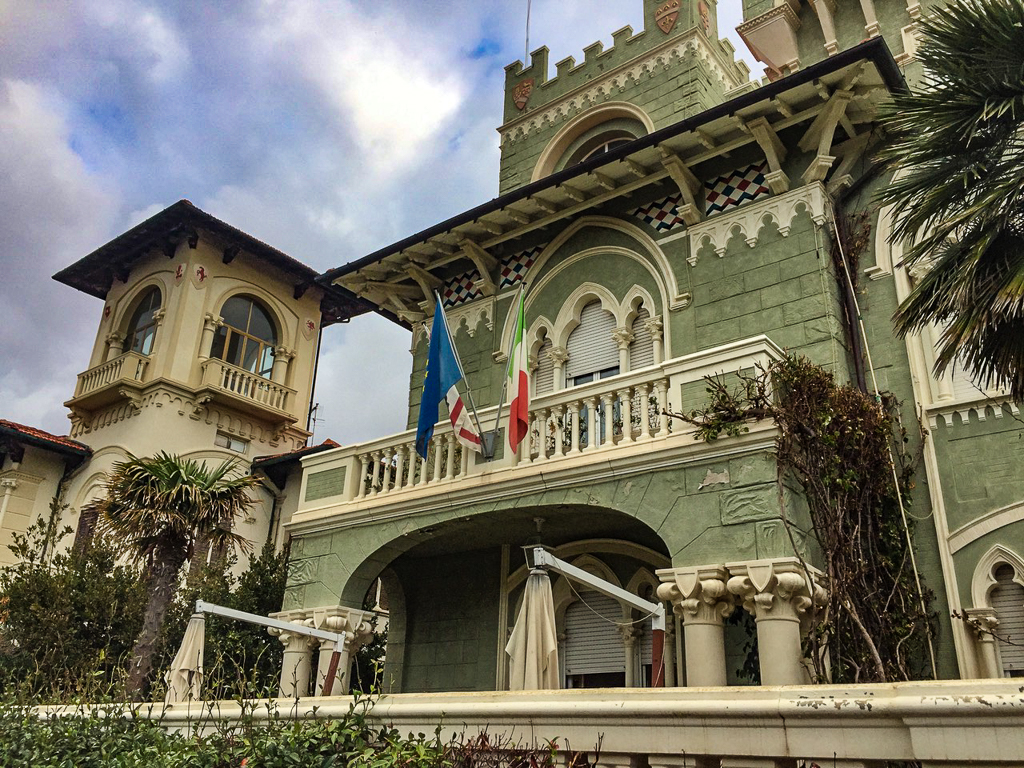 Continuing south from Terrazza Mascagni is Viale d’italia, a road flanking the city’s seven-kilometer passeggiata al mare (walkway along the seaside).  It is green and well-kept,  and is dotted with bars and cafes for resting and people-watching.  Baracchino Bianco and Baracchino Rosso are two of the best known.  The “red bar” is older and attracts more of a family and senior crowd.  The “white bar’ is a meeting point for the city’s younger generation. Occasionally you might see smartly-uniformed cadets, some of the 1,000 students attending the Italian Naval Academy, which has been based in Livorno since 1881.

An ambitious walk from Terrazza Mascagni south to the D’Ardenza section of Livorno, then southeast – and up! – will bring you to the Sanctuario di Montenero.  It’s about nine kilometers, with the last kilometer – up a 15% incline to an altitude of 109 meters – by far the toughest stretch.  Montenero means “black mountain” in Italian and refers to either the dark soil or the dark vegetation found here.

Montenero is famous for a miracle from 1345.  A cripple found a painting of Mary and Jesus and a voice told him to carry the painting as high as he could.  He carried it most of the way up Montenero to the present sanctuary, and when he stopped, he was cured.  Pilgrims in search of cures or blessings soon followed, and a chapel was constructed on the site, and amplified over the years.

The original painting and the chapel that houses it draws thousands of visitors a year, including many locals who feel that the Madonna of Montenero protected the city from an earthquake in 1742.

By then Livorno was a prosperous commercial center, a far cry from the sleepy little fishing village it had been when Genoa sold the town to the Medici of Florence for 100,000 gold florins in 1421.  The Florentines were fixated on building up trade in Tuscany and decided to develop Livorno as a port.   They asked architect Bernardo Buontalenti to (re)design this “new” city, and the first stone was laid in 1577. 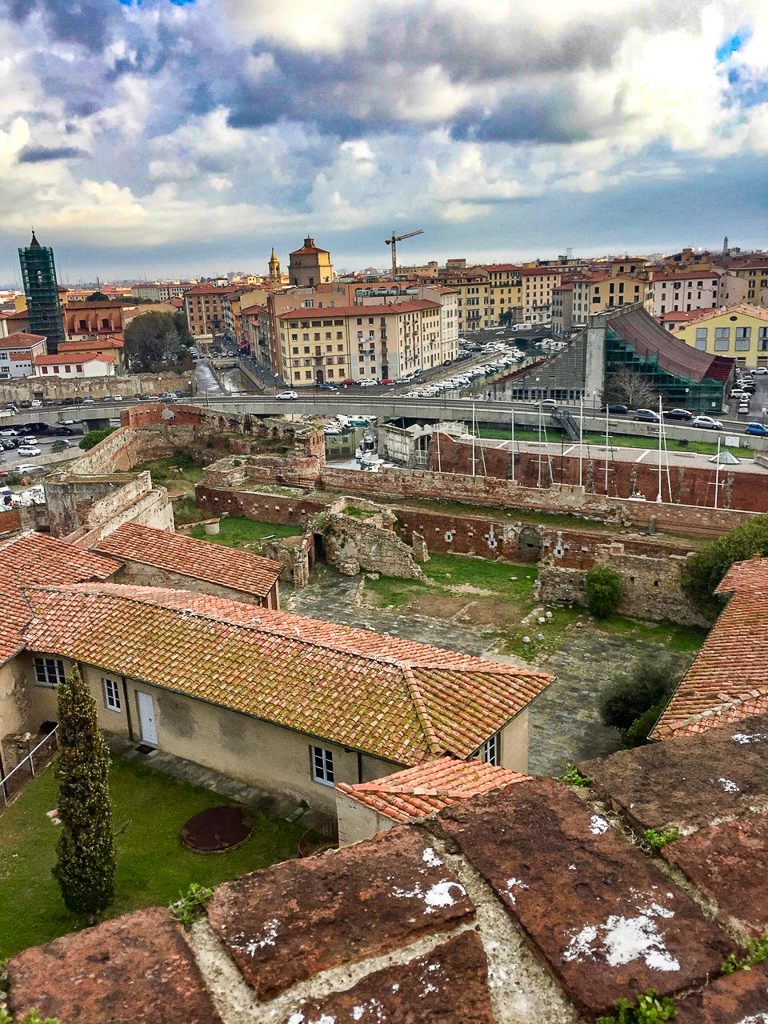 But architecture doesn’t animate a city, commerce does.  So in 1598-99, Ferdinando de’ Medici passed a series of laws, known as the Leggi Livornine, that transformed Livorno into a cosmopolitan metropolis.   The laws guaranteed religious tolerance to minorities and tax benefits for foreigners setting up businesses in Livorno.

The Medici succeeded in their objectives.  Livorno was given official city status in 1606, and soon hosted one of the largest Jewish populations in Italy, Sephardic Jews fleeing persecution in Spain and Portugal.  Their presence gave rise to a large synagogue, culinary specialties, and a local dialect, bagitto, that might be compared to Yiddish.  It is a combination of Hebrew, Italian, Portuguese, Arabic, Greek, Turkish, and Spanish.

Greeks, Armenians, Turks, Arabs, Dutch, French, and British merchants also came, and the Chiesa della Madonna in central Livorno bears witness to their presence. This church was constructed for immigrants too poor to build their own churches.  Each religious group – the French, Corsicans, Portuguese, Dutch and Germans (both Catholic and Protestant) — had its own altar and worshipped side by side with the others, starting in the early 1600s. 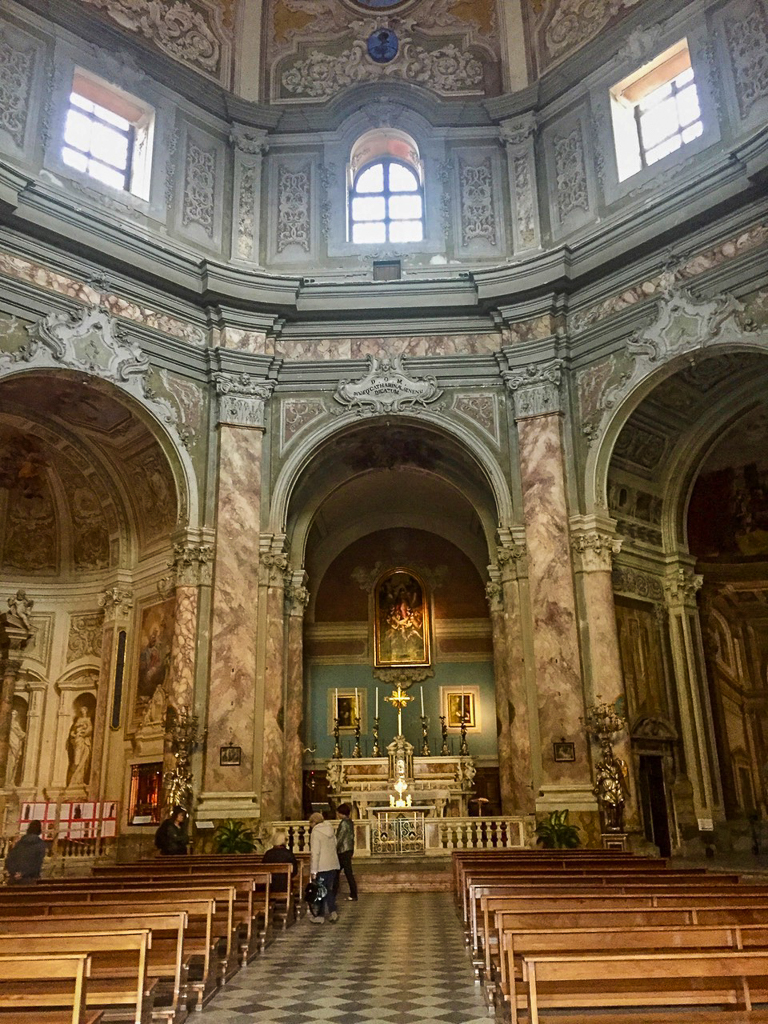 The Chiesa di Santa Caterina (Church of St. Catherine) is strictly Catholic; its claim to fame is that it may be the most beautiful in the city.  It was begun in 1720 and was meant to imitate the Pantheon of Rome, but the external façade was never finished and it doesn’t look like much from the outside.   The interior is a different story:  1,500 meters of frescos on the cupola, a beautifully restored Incoronation of the Virgin by Giorgio Vasari, and a 1,200-pipe organ by Antonio Ducci (the Stradivarius of organ-makers).

All of these sights can be enjoyed without the crowds or inflated prices that plague other locations in Tuscany.

Livorno – A Classy Italian City with a Clumsy English Name was written and photographed by Claudia Flisi. Her trip was organized and partially sponsored by the Tourism Board of Livorno.

Livorno is better than Pisa in every way. Livornesi are the best European people.

Happy to see my opinion about under-appreciated Livorno is shared by others. Glad you liked the pix too. Two more articles in this series; look for them in coming days and weeks.

I love living in Livorno, the people, the food, the history and it’s a great place to start from to see the rest of Italy and Europe