When hearing the word “Paris,” most people think of the Eiffel Tower, the Champs-Elysées, La Seine, fine dining…you get the drift. Not this traveler. The first thing that comes to mind for me is always le métro. Perhaps that is because riding on the métro was my first Parisian experience when I visited France at the tender age of 18 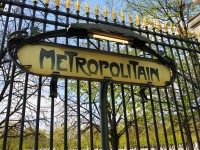 (when I took the RER- regional train- from Charles de Gaulle airport to the le métro, to my hotel). Or perhaps it is because I’ve witnessed some pretty amazing, authentic human interactions while I was on the métro. Maybe it’s because I think of the métro as the circulatory system of Paris, keeping the city alive and people in motion. Whatever the reason, Paris= le métro for me.

Le métro (short for Le Métropolitain) is Paris’ underground rapid transit system. The architecture of many of the stations and panneaux (signs) are influenced by the Art Nouveau aesthetic movement of the early 1900s . It has 16 lines, mostly underground, and a total length of 133 miles. There are a total 300 stations with 384 arrêts (stops). 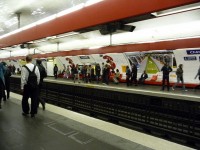 The métro is very easy to use. The Lines are numbered 1 to 14, with two minor lines labeled 3bis and 7bis. These minor lines were originally part of the main lines 3 and 7 but became independent due to an increase in transportation needs. Each line is assigned a different color, and direction of travel is according to terminus station (end of the line). 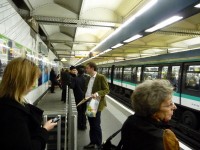 The construction of this extensive network happened in three main stages. From the 1900s to the 1920s, the center of the “web” was constructed in Paris proper. Next, from the 1930s to the 1950s, the network was lengthened to include nearby banlieues (suburbs). Eventually, between 1961 to the 1988, the métro was extended to include  most of the RER network. In 1998, the fully automatic line 14 was built, giving access to the northern part of the city. The métro connects to the RER regional train system, making for easy travel to sites near Paris and both airports. 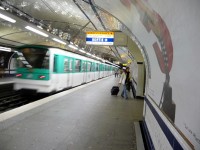 Each métro stop in Paris has a theme; most are named after historical figures and events. If you pay attention to the plaques and displays at the entrance to most stations, you will receive quite the history lesson! You’ll see several stations with double names, such as Reuilly – Diderot, Strasbourg — Saint-Denis, Marcadet – Poissonniers, Alma – Marceau and Faidherbe – Chaligny. This is because two or more stations on separate lines have been combined as correspondences (interchanges).

A range of ticket options are available for purchase at the service windows or ticket machines inside each station. Passengers can buy individual tickets for 1 euro and 50 cents or packets of 10 tickets (a carnet) for 11 euros and 10 cents. If you’re in Paris for more than a few days, think about purchasing a Carte Orange (weekly or monthly passes)- you’ll get more bang for your buck. Bring a small passport photo with you- it’s required for this sort of pass.
Enjoy the ride!

I love the Paris metro system...it gets you anywhere in the Ile de France area fast. The only issue is when the French decide to strike...which is pretty often. Then you're stuck.

If you visit Paris try riding on line 14 which is the completely automated line...no driver! Kind of freaky but it's pretty cool.