In his directorial debut, Ismaël Ferroukhi give us the story of Reda (Nicolas Cazalé), a young man from the south of France who must accompany his conservative Muslim father (Mohamed Majd) on a pilgrimage to Mecca just weeks before his college entrance exams.  Together, they travel the 3,000-odd miles from the south of France, through Italy, Serbia, Turkey, Syria, Jordan to Saudi Arabia, in their rusty blue car. 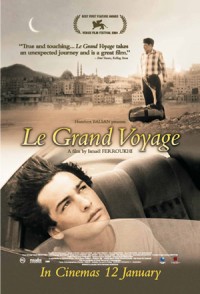 Reda, who has nothing in common with his father, finds it difficult to accommodate him when approached about the trip. The sparse dialogue and limited interactions between the two characters at the beginning of the film highlight this familial divide. The conservative, rigid father serves as a foil to the liberal, non-religious Reda.  Their myriad personality differences, both major and subtle, provide fodder for a cultural and generational clash that structures the entire film.  It may come as no surprise that eventually these divergent protagonists grow in their respect for one another.  However, despite this predictable ending, the film is engaging and the ending scenes reach an unanticipated pitch of emotional intensity.

The title, “Le Grand Voyage,” (“the big trip”) sets the tone for a simple, touching tale in which the down-to-earth, linear plot line and limited dialogue provide the backdrop for complex and nuanced acting. Cazalé makes an impression with his portrayal of the frustrated, melancholy Reda.  With his furrowed brow and disinterested posture, he physically captures the essence of a sulky teen. Ferroukhi’s astute writing magnifies the ideological separation between the two characters:
Reda: “Why didn’t you fly to Mecca? It’s a lot simpler.”

Father: “When the waters of the ocean rise to the heavens, they lose their bitterness to become pure again… “

Father: “The ocean waters evaporate as they rise to the clouds. And as they evaporate they become fresh. That’s why it’s better to go on your pilgrimage on foot than on horseback, better on horseback than by car, better by car than by boat, better by boat than by plane.”

“Le grand voyage” beautifully depicts the delicate tensions between first and second-generation immigrants failing to accept each other’s value systems.  A Moroccan-born immigrant to France himself, Ferroukhi understands this dynamic and skillfully translates it to the screen.  On a global scale, the film provides a portrait of a Muslim family living in France that challenges and debunks certain myths regarding Islam, and underscores the similarities between father-son relationships that exist in all cultures.

The film is available with English subtitles on Netflix and other rental companies.