As the train whizzes along the Rhine River from Mainz to Koblenz, I can’t help but feel as if I’m journeying into an idyllic fairy-tale land.  The train passes romantic little towns with a medieval feel, and idyllic villages perched on the steep hillsides tiered with vineyards and orchards. 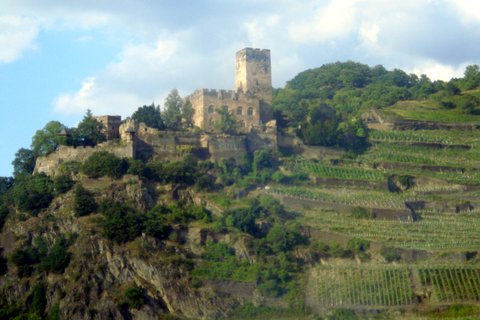 Atop the hills I spot the first of many picture-book castles. Adding to the magic, as the train winds around the bend there is the fabled Lorelei Rock where there was said to be a siren who lured boatmen passing by. The trip by train takes a couple of hours from Mainz to Koblenz, well spent enjoying the scenery and snapping photographs.

Koblenz is the second largest city in Rhineland-Palatnate. It was named for a castle the Romans built there around 9 BC “castellum apud confluentes’ which meant “castle at the confluence of the rivers.” Surrounded by four mountains and a picturesque landscape, you can’t help but get caught up in the history of this 2000 year old town. Rich in culture and history, there is an abundance of monuments and historic buildings, medieval churches, fortress walls, towers, castles, palaces, monuments and lovely parks. Koblenz was conquered by the Franks, French and Prussians and has been the residence of kings, princes, and emperors. As well, there are modern shopping areas with many sidewalk cafes 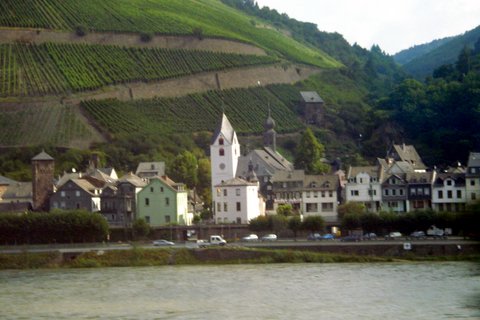 I walk along the river promenade known as “the Rheinanlagen” and enjoy the views, stopping now and then to investigate the many interesting statues and monuments. High on the hill overlooking the Rhine is the most prominent building in Koblenz, the Ehrenbreitstein Fortress, which houses a museum with exhibitions focused on history and culture. Here, you can take an aerial cable car across the Rhine to the fortress. 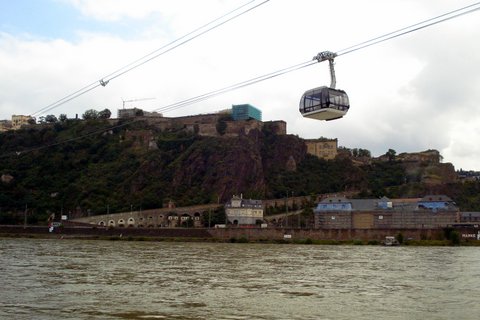 Aerial Cablecar across the river

I wander down to the place known as the “German Corner” located at the confluence  of the Rhine and Mosel Rivers. This famous point where the two great rivers converge is banked in concrete and made to resemble a battleship. Behind me looms a massive monument and on top of it, a statue of Kaiser Wilhelm I astride his horse. 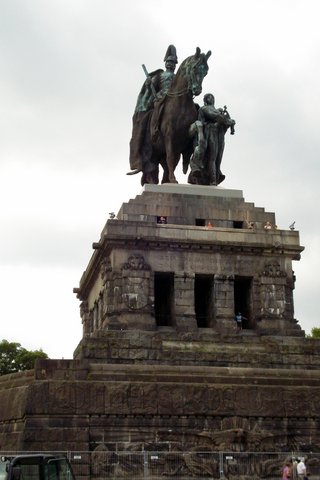 The huge equestrian statue was originally erected in 1897 but after World War II it was destroyed and the pedestal left empty as a symbol of Germany’s division. Once the country was again unified, the statue was replaced. I climb the 107 winding steps up to the top. From here there is a good view of the old town along the Mosel River. 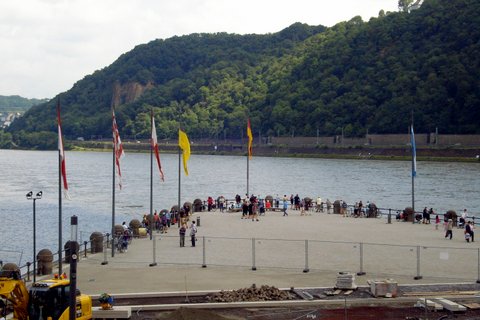 Confluence of the Mosel and Rhine Rivers

There are several cafes along the river, so I stop for lunch at Amalfi, an Italian restaurant,  and order a delicious traditional meal of  “Kleines Putensteakmedalions”, Tession in Aprikosen Rahmssauce with Krokettes und Kleiner salat  (Chicken done in apricot sauce.) Koblenz is known for its dry white wines, but I opt for a glass of Konigsbacher beer from a local brewery. This region is noted for growing hops which make the beer more bitter. 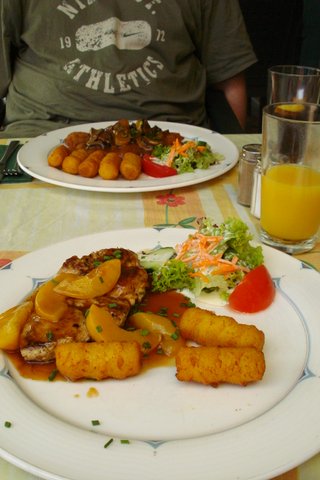 After lunch I take a boat trip along the Rhine to get a closer look at the castles. The day is sunny and warm and the scenery spectacular with orchards and vineyards tiered on the mountainside along the river. 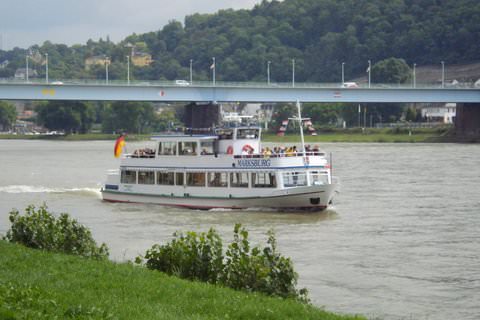 The boat passes many quaint villages and several castles. The most spectacular is Marksburg, the largest medieval castle in Germany. It is located over the village of Braubach, a real fairy-tale style of castle built of white stone. 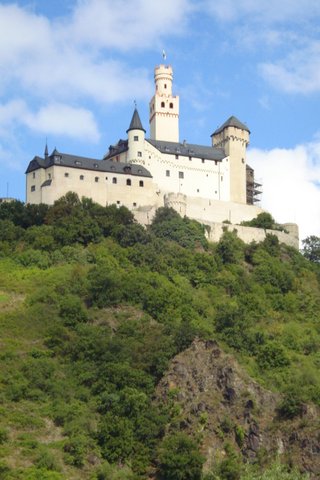 This breathtaking trip up the Rhine was the highlight of my day. I’d love to explore more of this fascinating area, but it’s time to take the train back to Mainz. However, I’m sure I’ll return again to tour the full length of the Rhine gorge and visit the many wine villages, and all of the thirty-two castles.

I' ve visited the Kaiser willhelm monument at koblenz. It is indeed a wonderful and memorable site with the warm cool breeze from the river

Koblenz: Another Jewel in Germany’s Crown

Never get tired of looking at castles from Europe...enjoyed the photos and fun article. Have never been to Koblenz but its on the map now.