The ancient city of Kiev (Kyiv), believed to be at least 1500 years old, is known as the cradle of Slavic civilization. Three brothers and a sister are the legendary founders of Kyiv, named after the oldest sibling Prince Kyi. This foursome wielding bow, sword and shield are fashioned in metal at the 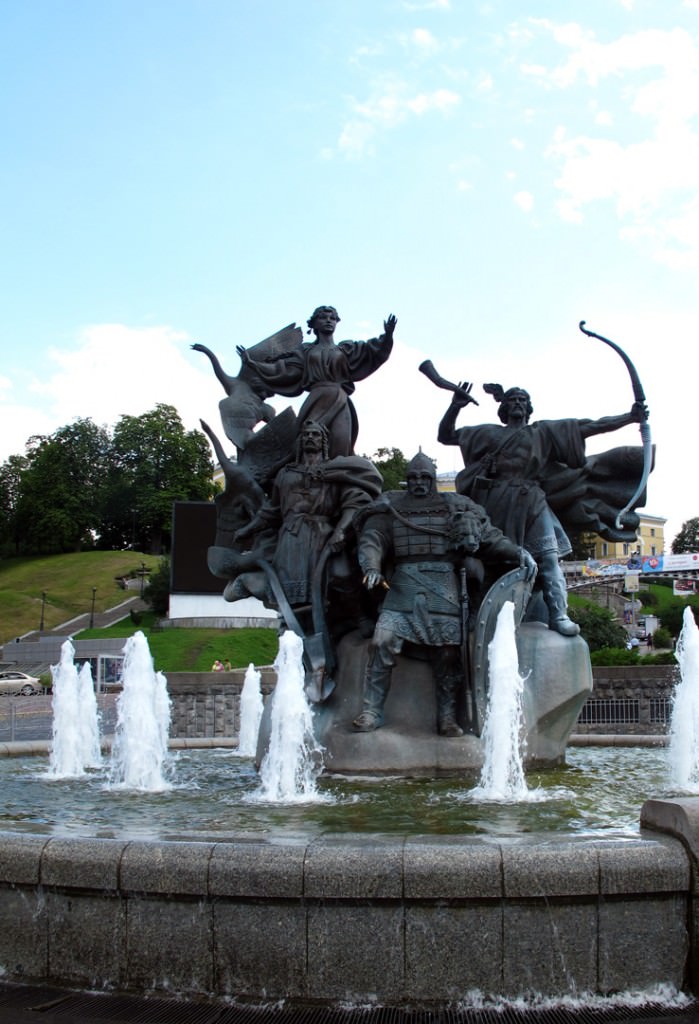 Independence Square fountain (Maiden Nezalezhnosti) in the centre of Kyiv (Kiev in Russian). The 30ºC day has prompted folks of all ages to splash in the water as it cascades over a wide staircase. Tiers of concrete seating around the periphery of the square are packed with families and friends sharing picnic lunches while a phalanx of pigeons at their feet wait for crumbs.

I gaze upward at the statue of the protective goddess Berehynia rising from a lofty marble column atop a sizeable arch. It was erected in 1991 to commemorate Ukrainian independence in the aftermath of the Soviet Union’s collapse. I can only imagine its profound significance given the country’s history of over 300 years of invasions and occupations.

On our first stroll of many down Khreshchatyk Street which flows from the square, my husband Rick and I are agog with its beauty. It is hard to believe this street was destroyed during WWII, 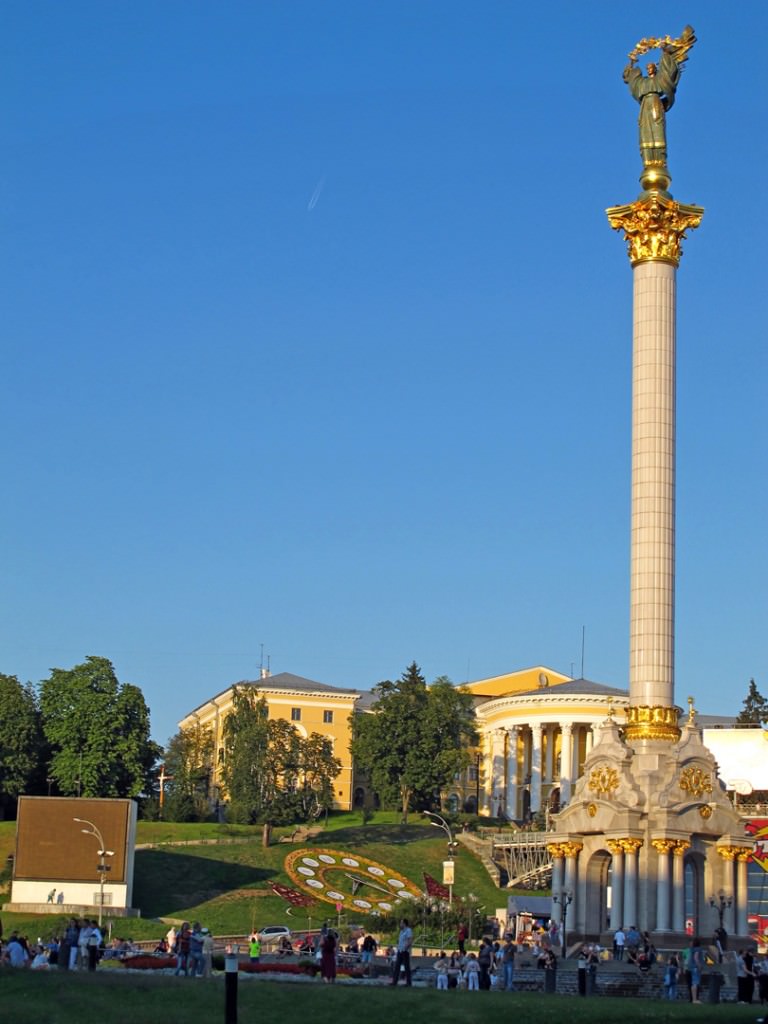 then completely rebuilt in the pompous style of the Stalinist era. Being the weekend, this main commercial street is closed to traffic. The atmosphere is one of mild chaos with the sheer volume of meandering locals and visitors while many others partake in the delights of sidewalk cafes.

Away from the city centre, monuments stretch out in all directions. Along the Dnipro (Dnieper) River the enormous female warrior Rodina Mat (the Motherland) glints in its stainless steel coat against the azure sky. A mighty iron rainbow known as the Friendship of Nations Arch spans the horizon; a belated tribute erected in 1983 to commemorate the 1653 unification of Ukraine and Russia. The Golden Gate (Zoloti Vorota) is the reconstructed ancient entrance to Old Kyiv, encompassing part of the original wall. On the corner of bustling Bessarabska Square the city’s last remaining statue of Lenin ironically stands amid billboards of capitalist marketing propaganda. 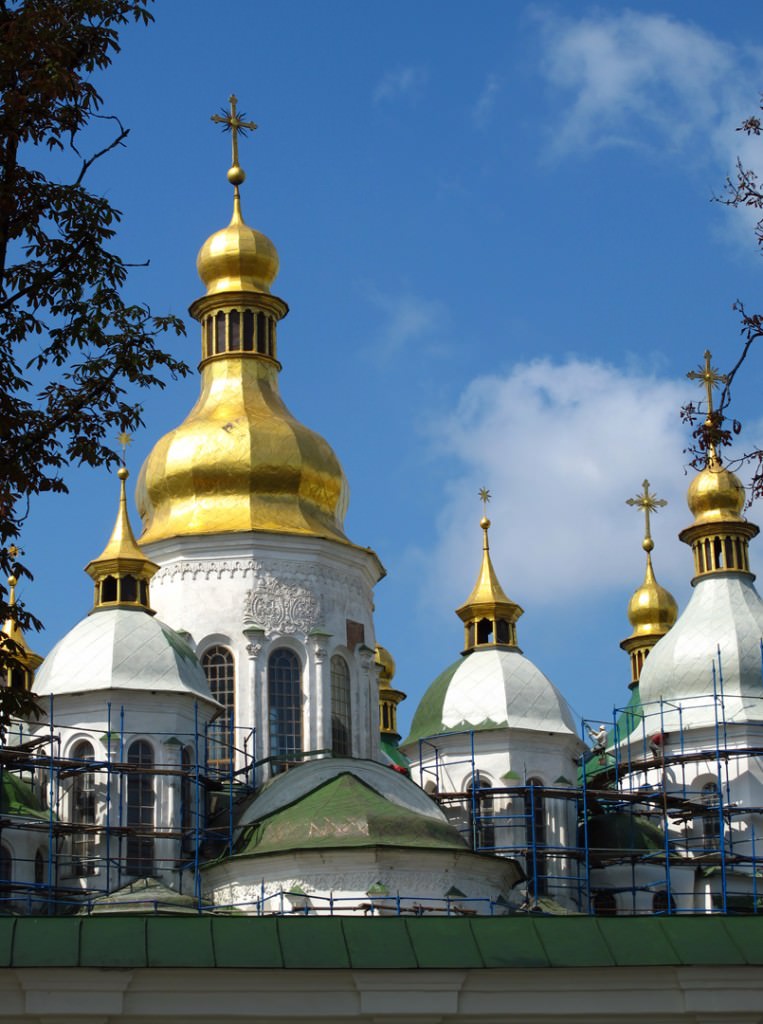 The moniker “city of golden domes” has attached itself to Kyiv for its abundance of majestic, gilded cupolas of the many churches. St. Sophia’s Cathedral, the oldest standing church was built in 1037 by Prince Yaroslav the Wise, whose body is entombed within. After absorbing the beauty of the rich frescoes and mosaics, some dating back almost a millennium, we are leaving the church when melodious singing draws our attention to the street. A procession of thousands spills into the church square. Men and women in traditional embroidered shirts and blouses are interspersed with clergy in full regalia of flowing robes of gold; the bishops’ ensemble topped with golden crowns. I search the crowd for a young person, who will probably speak English when a teenage girl says, “This is the anniversary of when Christianity came to Kyivan Rus”. This historic name dates back to when the Varyagi (or Rus) a Swedish Viking civilization, ruled a vast area of Eastern Europe with its capitol in Kyiv between the 9th and 11th centuries. Prince Volodymyr, upon visiting Constantinople in 988, accepted and brought Christianity back to the powerful state of Kyivan Rus. 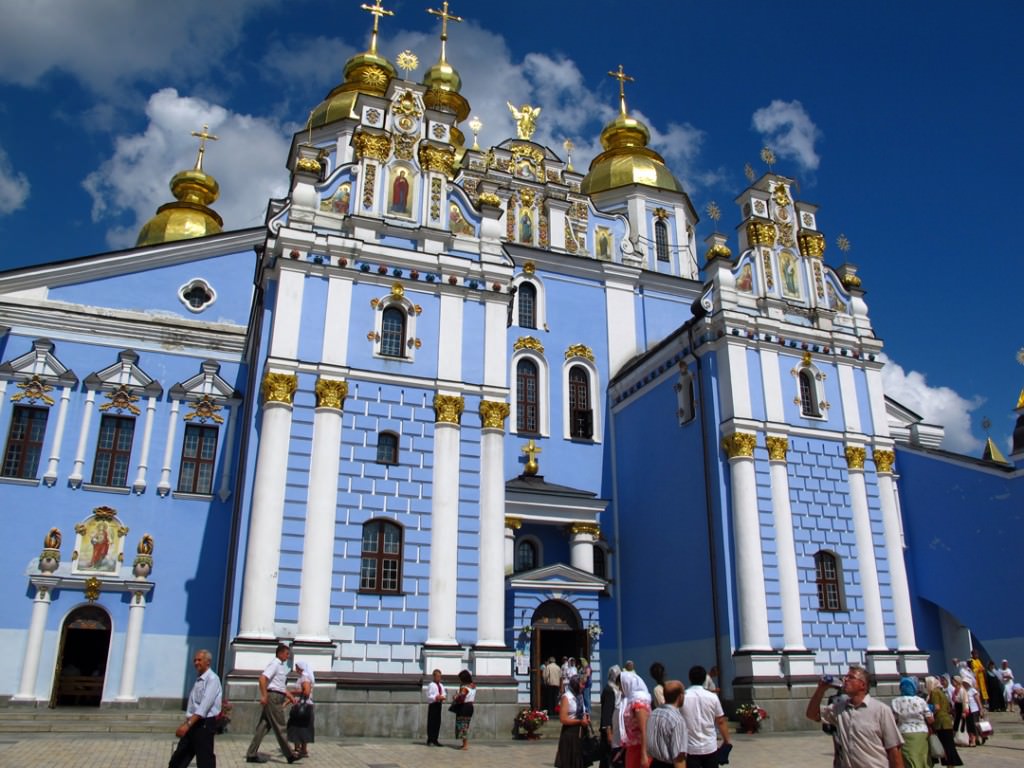 Opposite St. Sophia’s is the stunningly beautiful St. Michael’s Cathedral. The original, built in 1108, was destroyed by the Soviet Regime in the 1930’s for having “no historical value”. Reconstruction of its bright blue exterior and golden domes was completed in 2000, with statues of saints in alcoves across the top to watch over it.

We figure by now our clambering about hilly Kyiv has built-up our calf muscles enough for the long undulating walk to what is commonly known in English as the Caves Monastery (Kyiv-Pechersk Lavra). This 28-hectare complex on the sloping banks of the Dnipro is said to be the “Rome” of Orthodox Christianity with several stunning churches and museums of folk art and historical treasures. 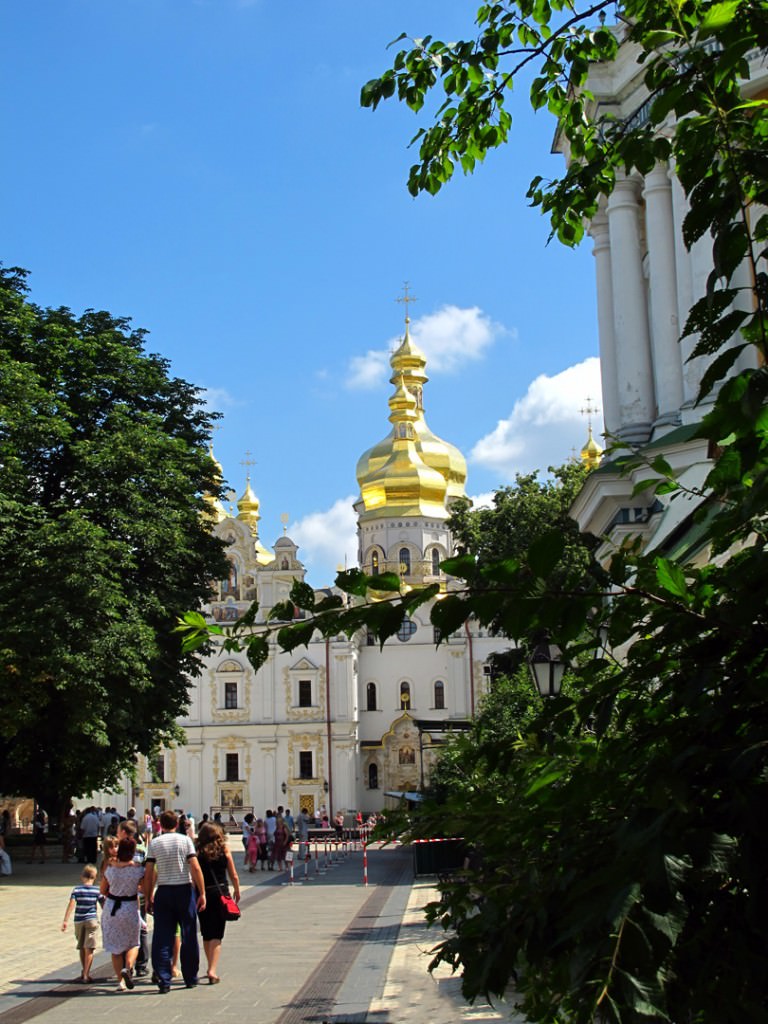 The focal point for me is undoubtedly the underground monastery founded by monks Antony and Feodosiy in 1051. “The monks who entered dug the caves themselves,” says Peter, our guide. “Their mission for the rest of their lives was continuous prayer, only interrupted by sleep and meager meals passed to them by monks who took on this duty. After their death the cave became their tomb. And, due to the cool temperature and perfect humidity, their bodies mummified naturally.”

With a candle to light our way, we move slowly along the dimly lit passages lined with glass-topped coffins where the corpses now rest. The reflection of my candle flame flickers in eerie tendrils as I peer into coffin after coffin, scanning the decoratively shrouded corpses to find the ones that reveal exposed hands. Black as basalt, but not in the least shrivelled, the hands resting across their chests are as detailed as my own with knuckle creases and fingernails. The fact that the monks bodies remain in this uncanny state of preservation to this day heightens the conviction of believers that they were true holy men. Pilgrims and visitors come in droves, this being the spiritual heart of Eastern Orthodoxy. 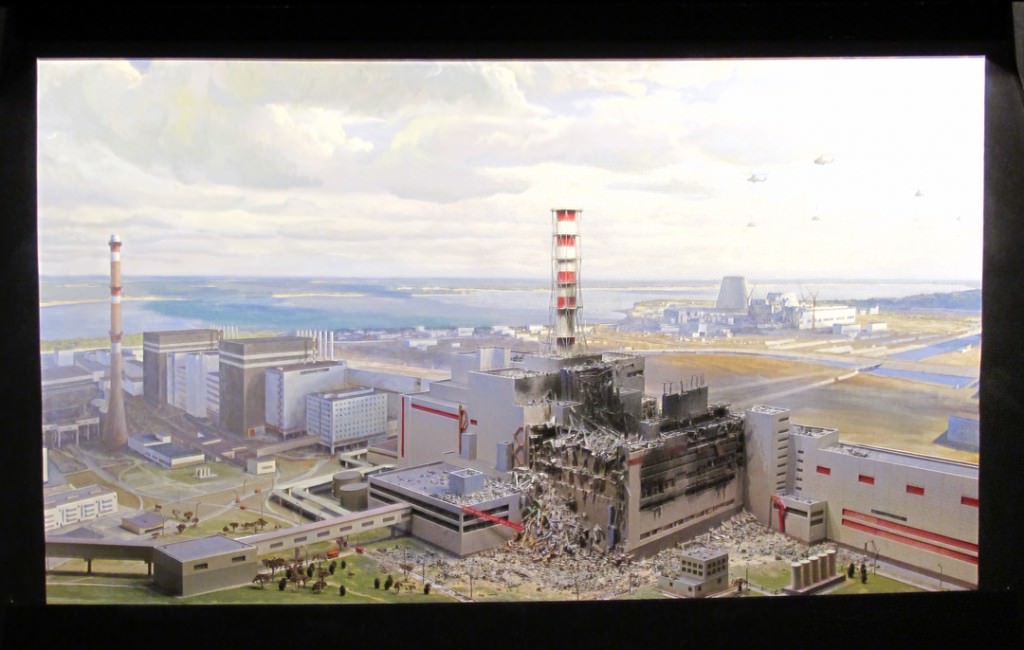 A visit to Kyiv is not complete without a visit to the Chornobyl Museum. There’s no English signage, but an audio device leads us through the disaster that occurred at 1:23 a.m. on April 26, 1986 when two explosions blew the top off reactor No4. The radiation released is believed to be 100 times that of the atomic bombs dropped on Hiroshima and Nagasaki. Photos line the walls of the heroic men who risked their lives while being exposed to lethal amounts of radiation. Some, with barely more than face masks for protection, work long and hard to encase the reactor in concrete and steel. The horror is brought to life on screen with before and after pictures of the tragedy. The graphic detail of the devastation to homes and farmlands, as well as the human suffering and early deaths, was as disturbing as it was informative. 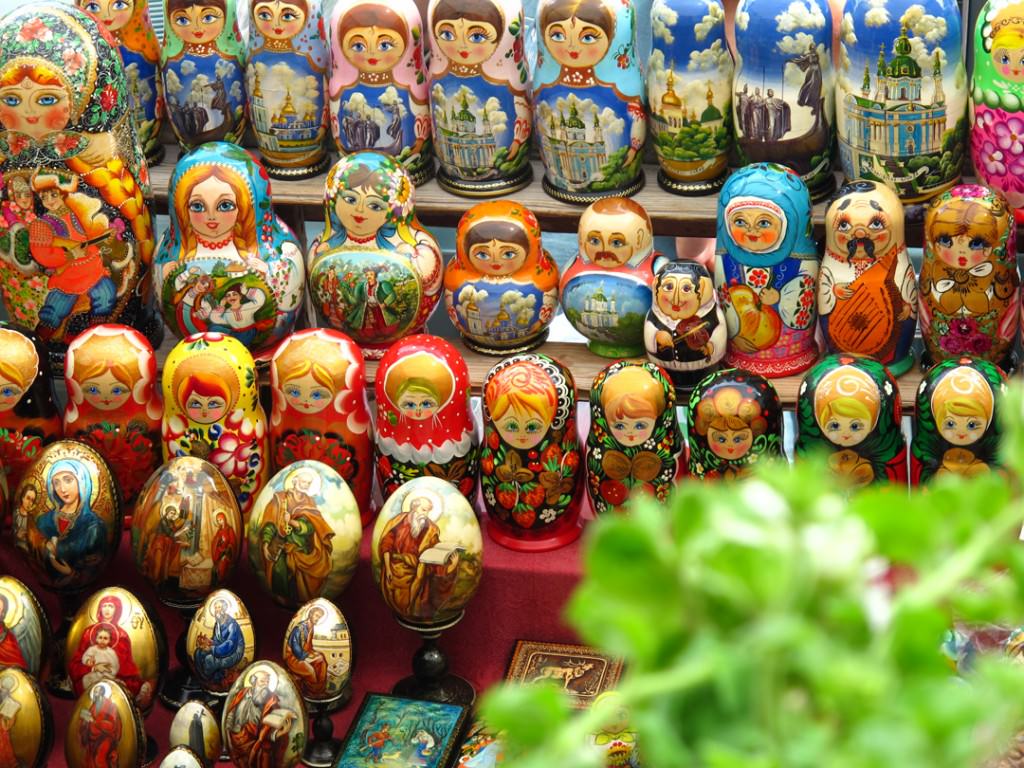 A stone’s throw from the museum is Andriyivsky Uzviz (Andrew’s Descent), one of the oldest and most quaint streets in Kyiv. It is also known as souvenir street.  From fine crafts, to tacky, to bizarre – it’s all here. I scour the lean-to-shops that fill each side of the rough cobblestone roadway and come away with a stash of matryoshka (nesting) dolls.

After each full day of seeking out the sights we are duly appreciative of Kyiv’s cosmopolitan side given its great selection of fine restaurants which further enrich its culture in the delightful form of traditional cuisine.

We then leave the capital for relaxing floats on the tepid waters of the Black Sea and even more adventure in the resort town of Odesa.

Written by Irene Butler for EuropeUpClose.com

Irene Butler is an award winning travel journalist and author of “Trekking the Globe with Mostly Gentle Footsteps”. Her articles have appeared in national and international magazines and newspapers. She and her husband Rick explore the world for six months of every year. www.globaltrekkers.ca