At the souvenir stand, the music boxes play “Isle of Capri” all day, every day. The vendor wears a pained expression. For the rest of us, life on Capri is pure enchantment. 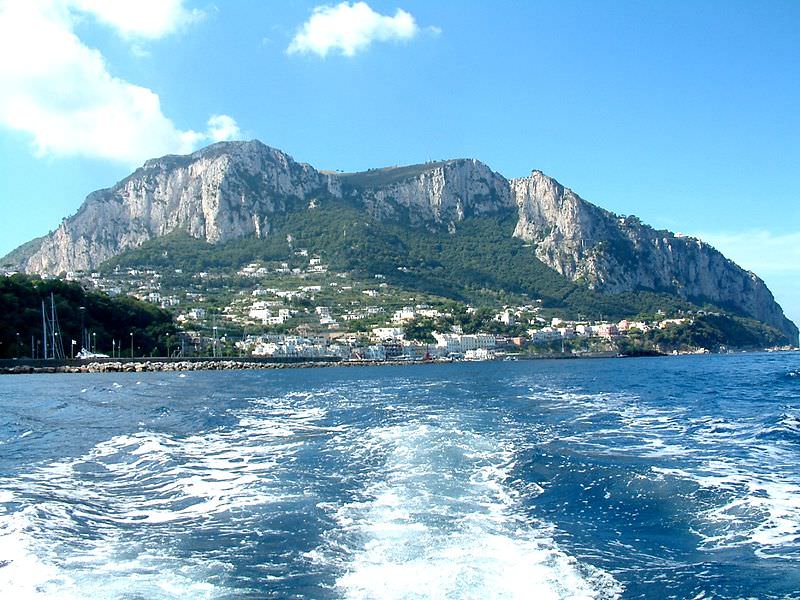 It’s true that Capri, a short ferry ride from Italy’s mainland, is over-touristed and ultra-pricey (but still charming) in the height of  summer. Off –season, John and I are often the only walkers on the stone paths that twist around cliffs high above the Bay of Naples. We’re far from the crowds headed for the famous Blue Grotto, where you line up for a brief rowboat ride into a cave filled with incredibly blue water. The rower sings and expects a tip. La Grotta Azzura (Blue Grotto) is too famous not to go, and the water is amazing. But once is plenty. 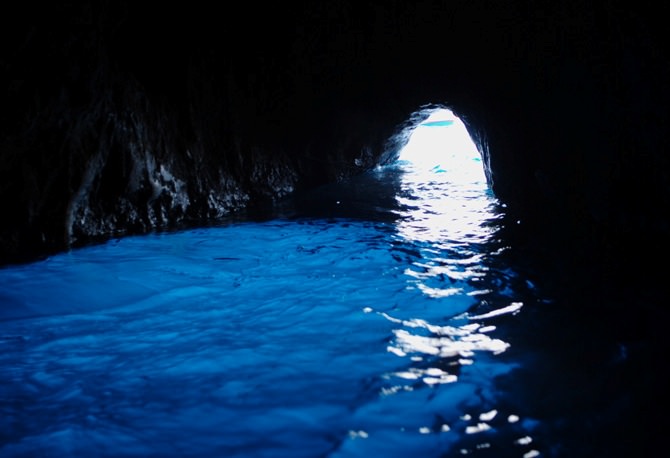 At the ferry landing, it’s a cog railway ride up to the town of Capri (or you can walk the stairs or take a bus or taxi; other cars are strictly regulated or prohibited on the island).  The town, with a population of 7,000-plus, is always busy, especially on the piazzetta, the square where everyone sips cappuccino at outdoor cafes. The narrow streets around it are lined with boutiques and designer shops. They sell high-quality goods here, and they’re not always the most expensive. Artisans are known for their exquisite jewelry, fine leather goods, and perfumes. Don’t miss the best lemon liqueur you’ll ever taste, limoncello.

The island, only four miles long and two miles wide,  has two mountain peaks: Monte Tiberio on the east side and Monte Solaro above the village of Anacapri. Between and around their foothills are steep streets edged with vineyards, olive trees, and flowers cascading from the balconies of white and pastel homes. The coastline is rocky and rugged, with a few secluded bays and pebbly beaches. Some are not accessible by land, and a boat tour is a great way to see them and escape the crowds.

Visitors have been falling in love with Capri for a long time. The Roman emperor Tiberius built twelve villas and ran his empire from Capri much of the time. The main palace ruins are at Villa Jovis, on Mt. Tiberio. 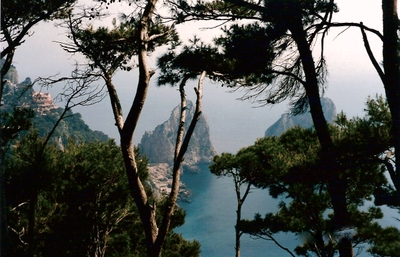 In the late 19th century, Alex Munthe preserved one of the imperial ruins, along with a medieval chapel and ancient artifacts, in the gardens of Villa San Michele near Anacapri. The Swedish doctor and author lived in the villa for several years but it’s now open to the public and well worth a tour.  In the spring and fall, flocks of migrating birds fly through.

In Anacapri, I’m impressed by the most unusual floor I’ve ever seen: it depicts Biblical scenes in majolica tiles. It’s surrounded by a walkway so you can take in the full picture. From Anacapri, we take the chairlift to the 570-meter summit of Monte Solaro . This is the place to see the most spectacular views of Capri, the bay and the sea. It’s a scenic and not difficult walk back. 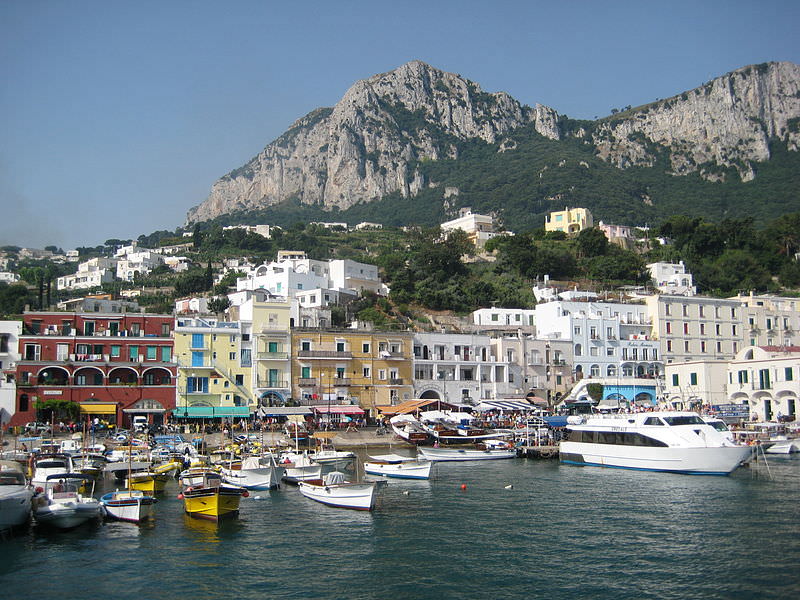 Monte Solaro from the Capri coastline

As we wander the paths and steps of the island, we come to Arco Naturale, a great archway in the cliff. Then we descend stairs to an immense cave, the Matermania Grotto. Beyond the grotto, our walk passes panoramic views and glimpses of gorgeous little villas behind iron gates. We stop for a coffee on the terrace at Hotel Villa Brunella, and at Belvedere di Punta Tragara to admire the postcard view. Next to the overlook is the contemporary and expensive Hotel Punta Tragara, admirable for its lush gardens, pools and elegant restaurant.

Where to Eat on Capri

Restaurants abound. Aurora, near the piazzetta, serves traditional foods of Naples and Capri with a creative touch. With a good, mostly Italian wine cellar, it’s considered one of the best. Dine on the terrace near the Arco Naturalle at Il Grottelle, where the focus is on Caprese foods, especially seafood and pasta dishes. La Cantinella, in an 18th-century villa, is noteworthy. Other good choices are DaGemma, casaNova, and Le Terraza.  Sometimes John and I pick up fresh tomatoes, a hunk of cheese, bread and wine and dine in style on our own small balcony.

Where to Stay on Capri

It’s only one of several luxury hotels on an island that has catered to the rich and famous for centuries. The Caesar Augustus, above Anacapri, perches on a cliff a thousand feet above the water and claims to have the “most breathtaking view in the whole world.” If not, it comes close. It offers an infinity pool, hot tubs, and candlelight dining on the terrace.

Less costly is pretty Villa Sarah, a welcoming and comfortable place a short (10-plus minutes) from the piazzetta.  It has a pool and breakfast is included.

I love Italy, specifically this island of Capri , so breathtakingly beautiful and i am planning to visit this island during our 10th wedding anniversary next year!