One of the greatest of Italian inventions is gianduja, and the best place to sample it is Turin, Italy. About 60% of Italy’s chocolate comes from this city on the River Po, in northern Italy’s Piedmont region. If you’ve ever tasted the creamy combination of chocolate and hazelnuts called Nutella, you’ve had a slight hint of  the flavor of this marvelous confection. I didn’t know this until I arrived in Turin, 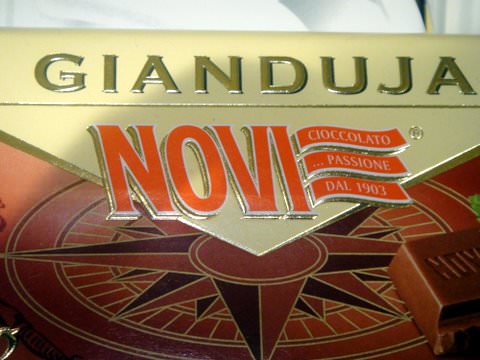 saw the dazzling array of shops, and learned that chocolate in dozens of forms is as important as pasta and truffles to the city’s cuisine. The classic gianduja (also called gianduia and probably other spellings as well) is a mixture of chocolate, sugar and about 30% hazelnut paste. Modern versions may include almonds, walnuts, or bittersweet chocolate. Gianduiotti, boat-shaped chocolates, and Ferrero Nutella have similar ingredients.

Agriculture, economic necessity, and smart thinking created these now-famous products. Back in the 18th century, Turin’s chocolate makers imported raw materials from across the Atlantic, turned them into fine chocolate, and exported 750 pounds a day. They were known as the best producers of chocolate; even the Swiss came to Turin to learn the trade. Then, in 1806, Napoleon interfered by setting up a naval blockade, which limited supplies and and making their availability unpredictable. So the inventive Italians turned to 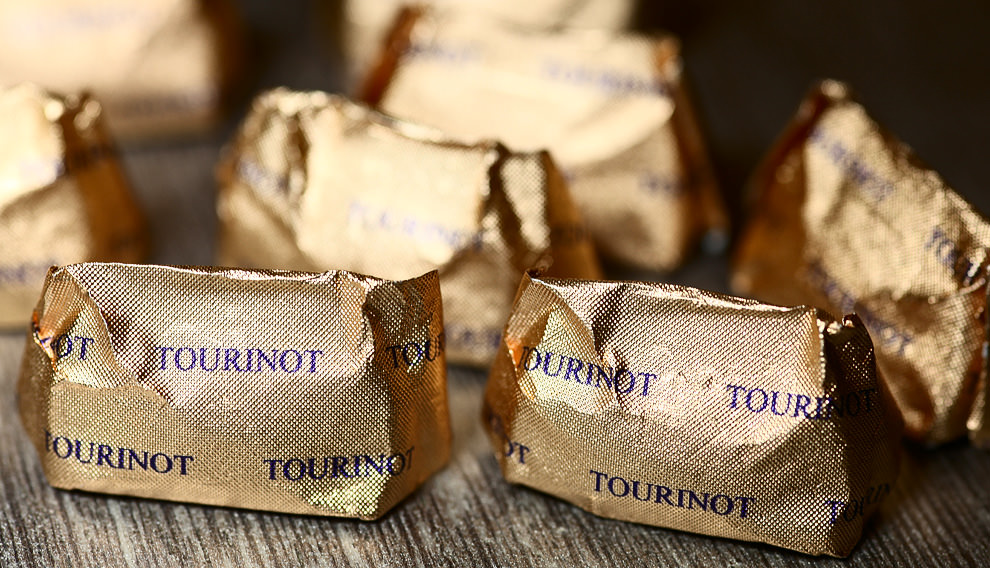 one of their prized farm products, hazelnuts, to stretch the now-scarce, expensive imports. The nuts grown in the hills near Piedmont happen to be the world’s most flavorful, and when they were roasted, ground, and mixed with chocolate, they turned into a delectable treat. It was named after a Piedmont comic character, Gioan d’la Duja. The hand-molded candy, each piece wrapped in foil, was introduced in the mid-19th century and since then has been one of the enduring symbols of Turin.

Guido Gobino is probably the best known retailer of Turin’s chocolates and has two locations, one with a laboratory you can visit if you request in advance. In the shops, elegant little handmade candies are displayed in dozens of flavors—mint, orange, fruits, berries, spices, salt, and even the great regional wine, Barolo.

Pfatisch is an Art Deco shop that is part of Turin history. It has sold pralines, chocolates, meringues and pastries since the 1920s. In its basement you can see the old roasters and grinders once used for making chocolates.

Gertosio, Guido Castagna, A. Giordano,  La Perla, and Piemont-Cioccolato are other noted chocolate purveyors. Venchi is a good stop for gelato, and in Re Gianduia you can buy gianduiottino, a rich drink made from gianduia, coffee, and milk.  Stratta, which dates from 1836, keeps expanding its mouthwatering array of flavors. I regret to say I was not able to sample each and every type of chocolate in every shop. However, that simply requires another visit—or several–to Turin, one of Italy’s most intriguing, sophisticated cities. If I’m lucky I’ll be there during the annual 10-day March festival, CioccolaTO, when more than 100 vendors display their wares on Piazza Vittorio Veneto and amazing sculptures are created, all in chocolate.