Older than Stonehenge and the Pyramids of Giza! My passion for archeology spikes with the thought of seeing 5,000 year-old-tombs! My husband Rick is a willing participant as we point our rental car away from Dublin towards the vast area of Brú na Bóinne. This complex Megalithic site in County Meath, Ireland is known for its three major tombs – Newgrange, Knowth and Dowth (together deemed a UNESCO site in 2004). 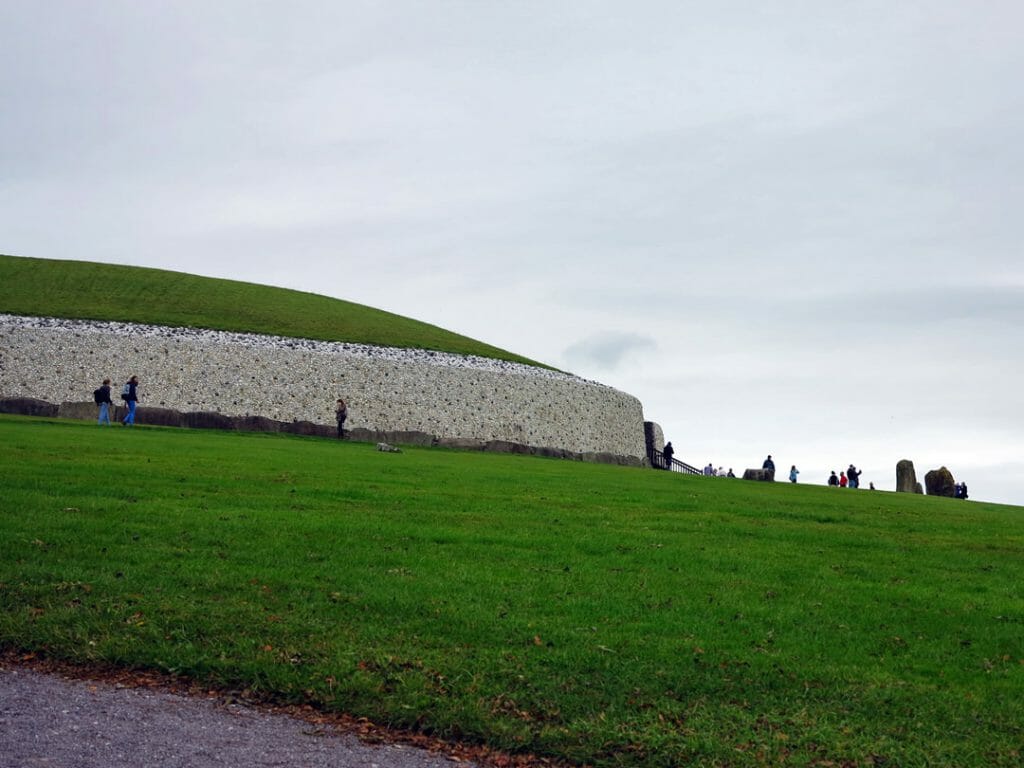 At the Visitor’s Centre we are swept up in the intrigue of these Neolithic places of religious, astrological and ceremonial significance, known as Passage Tombs, for their long entries into the burial chamber. Cairns were built above each tomb and the mounds encased in gigantic kerbstones; many bearing chiseled markings. Following the Neolithics (3000 – 2000 BC), the tombs continued to be used in succession by Iron Age civilizations, early Christians, and Normans. 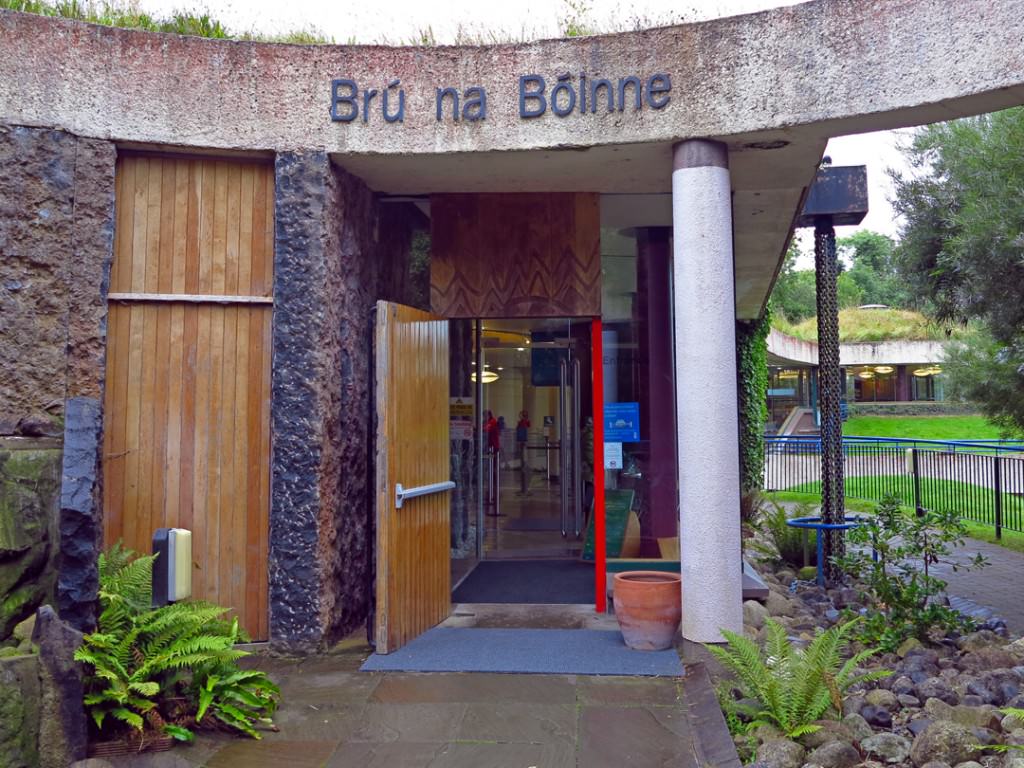 We catch the facility’s shuttle to Newgrange, the most visited tomb. Its mound with 97 kerbstones covers an acre! Lindsey, our guide, points out that during the restoration process soil and grass were added to the cairn rocks to help preserve the tombs, and ledges were built out from on top of the kerbstones to protect them from further weathering. “The white quartz, incorporated into the side wall during reconstruction, was once on the ground at the entrance to the tomb. It is thought that pilgrims may have brought these stones with them, as this type of stone is found over 70km (43mi) away.” 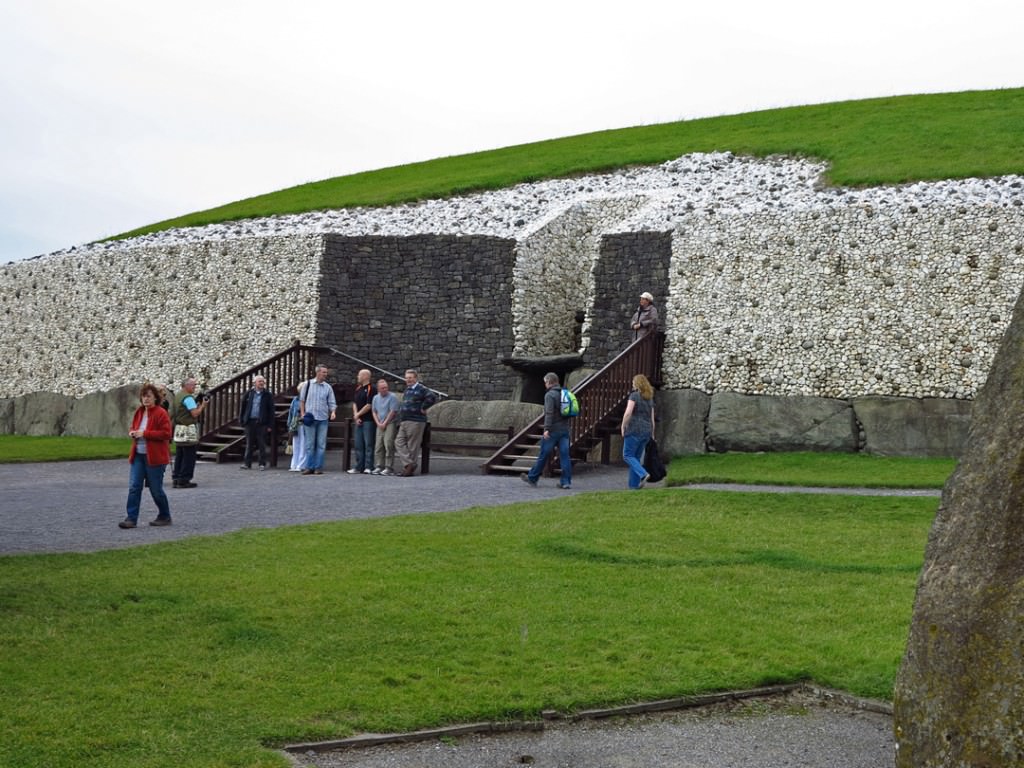 “If you’re not claustrophobic – follow me,” says Lindsey. Passing behind a mega entrance stone with mystifying swirls, I enter the narrow tunnel. In places it so narrow my jacket brushes the stone along its 19m (62ft) length. I glance backwards to see how Rick is faring; with his larger frame he sometimes turns sideways to fit and scrunches down where the ceiling is low. 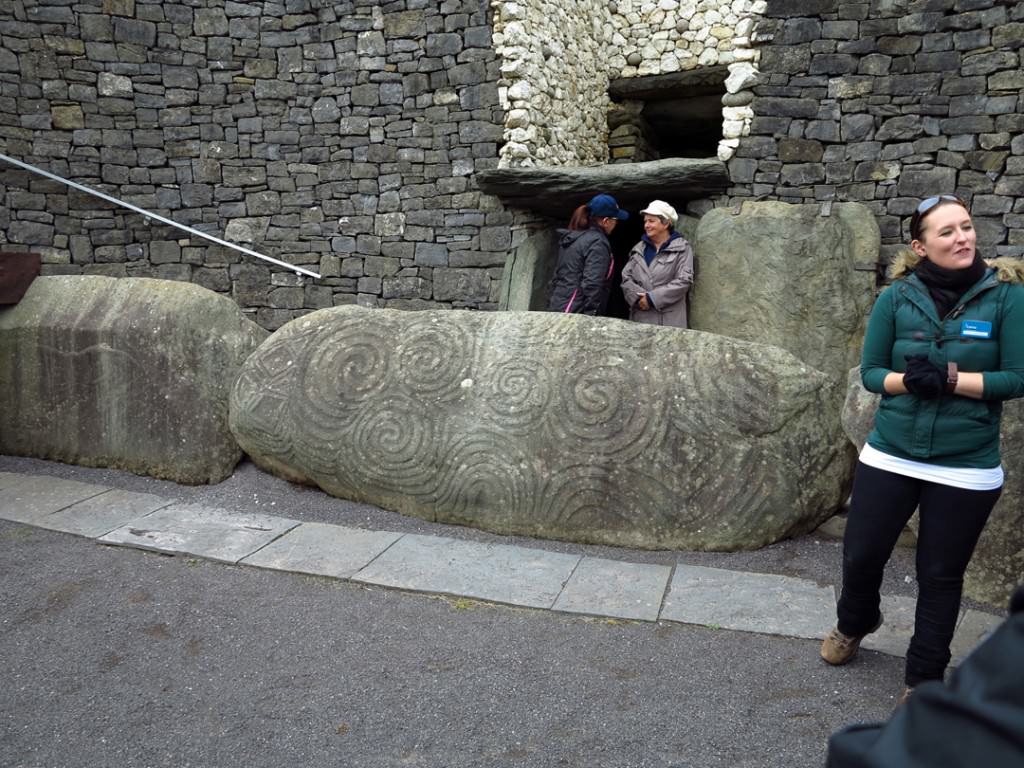 My breathe catches when we come into the dimly lit burial chamber, spacious enough to fit the dozen folks in our group. Lindsey’s voice resonates with an eerie echo, “This corbelled roof rising six meters or about twenty feet from the floor has never been restored; it is as it was in 3,200 BC.” I gaze in awe at the huge layered rock slabs with small stones wedged between, absorbing the immense weight of 4m (13ft) of cairn stones above this domed ceiling.

Our attention turns to the stone basins on opposite sides of the cruciform chamber where the bones of the dead were placed during ritual. Arcane designs cover the back wall. In 1699 this chamber was discovered by the farmer who owned the land, remaining in private ownership for the following 200 years. “During which time” says Lindsey, “these inner walls suffered graffiti and some artifacts were removed.” 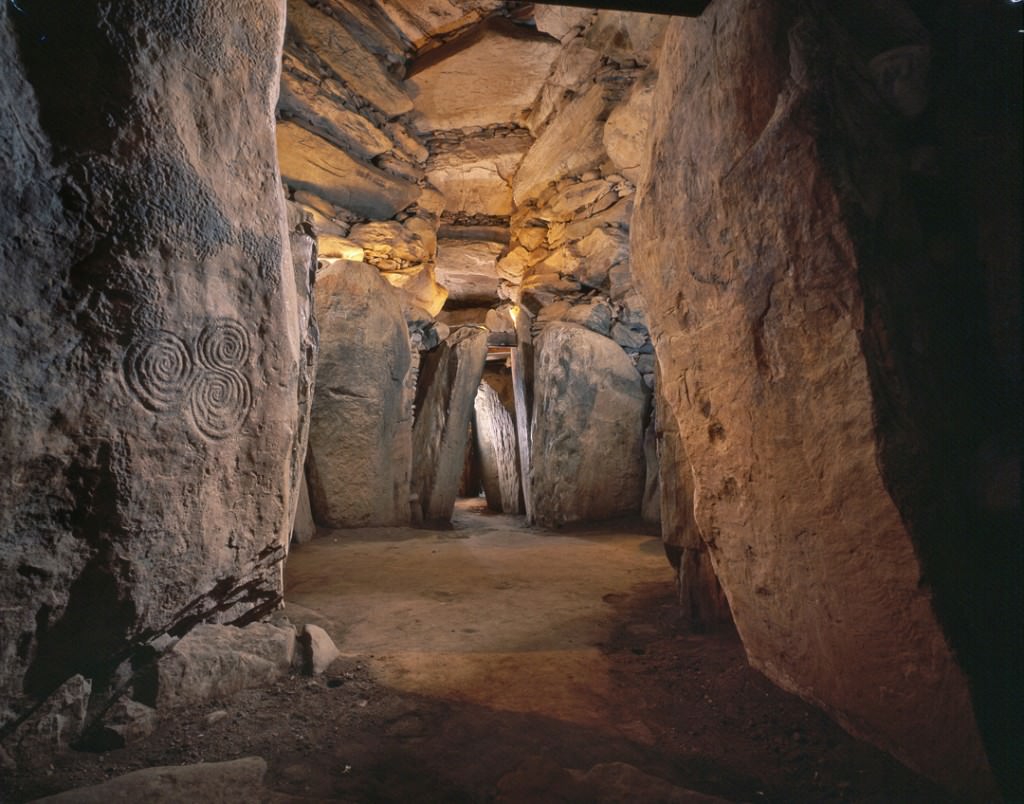 “Now… are you ready to perceive what eyes witnessed thousands of years ago?” Lindsey calls out. She turns off the interior chamber lights, leaving us in total darkness – then clicks a special switch. Rick nudges me, noticing first the thin shaft of pale light coming through the ancient roof-box opening above the entrance door. I barely breathe watching it increase in brilliance as it slowly moves along the tunnel and across the chamber floor. In this replication of the winter solstice, we stand in a golden glow, our shadows appearing as apparitions on the walls.

“Each year around December 21st this chamber remains lit for 17 minutes, beginning at about nine in the morning,” says Lindsey. I can only imagine these long ago people rejoicing this harbinger of spring and new crops to replenish their near empty storehouse of grains after a long winter. Heavy cloud cover during the winter solstice may have been seen as a bad omen. About one thousand years ago, Newgrange was abandoned, for reasons unknown. 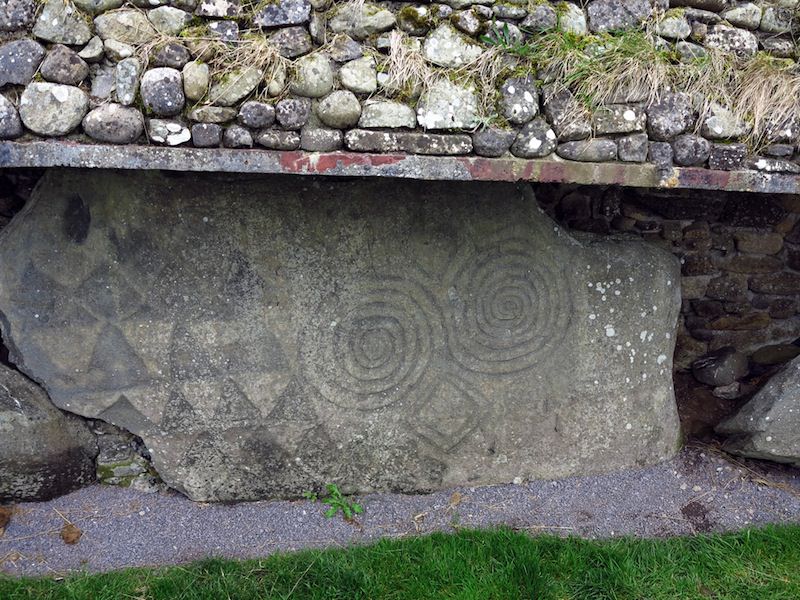 Out in the sunlight again, we wander on our own and examine the inexplicable designs on the kerbstones, their meaning lost. Two-thirds of all the Neolithic artwork in Europe is here. Each stone weighs from 1 to 10 tons, and it is believed they were brought up the Boyne River by raft-type boats, and then dragged on cut logs to the site. It recently took 80 men 4 days to move a kerbstone this distance. It is estimated to have taken 50 to 100 years to build Newgrange, which with the Neolithic lifespan being 30 to 35 years, meant generations.

We leave in awe of the engineering and astrological skills of these ancients, and wrapped in the shrouded mystique of this long-ago human existence.

We rented a car and drove from Dublin (under an hour), but Bus Eireann operates a bus service between the Visitor Centre and the city of Drogheda (the closest city to Brú na Bóinne) in conjunction with service between Drogheda and Dublin. Private tours and coach tours can also be arranged in Dublin.

Newgrange and Knowth are accessible by shuttle bus guided tours only – arranged at Brú na Bóinne Visitor Centre. Dowth site has unrestricted access, but no access to chambers.

Written by Irene Butler and Photos by Rick Butler for EuropeUpClose.com

[…] Butler’s story of Ireland’s 5,000 year old burial mounds at Newgrange was published in Europe Up Close; check out the site’s great new look! […]