My husband and I got our introduction to Thalassotherapy on a recent trip to France, sponsored by the Gard Tourist Office. We were staying in La Grau du Roi-Port Camargue, an amazing French resort town located right on the Mediterranean Sea, not far from Nimes, and were invited to partake in a few Thalassotherapy treatments.

Developed during the 19th century in Brittany, France, Thalassotherapy is a series of wellness treatments using heated seawater to help ease such ailments as arthritis, achy muscles, chronic back pain, or just for relaxation and stress reduction. In Thalassotherapy, trace elements of magnesium, potassium, calcium, sodium, and iodide found in seawater are believed to be absorbed through the pores of the skin, thereby improving blood circulation. 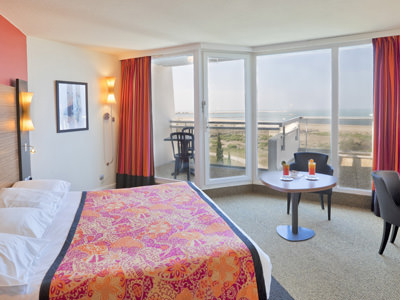 Upon checking in to the hotel Mercure Thlassa Port Camargue, we were greeted by Claire Delepaux, who gave us our treatment schedule. After settling into our comfortable room, we put on our swimsuits and the spa shoes and bathrobes provided by the hotel.

It seemed a bit odd to be walking around the hotel wearing a bathrobe and spa shoes, but there were plenty of other people in their robes; after all, this is a hotel totally dedicated to Thalassotherapy and beauty treatments.

First, we each had a Hydro-jet Session that lasted about 20 minutes. During this private session, we were given a head to toe massage while lying on a heated waterbed. The high pressure water-jets under the surface of the water bed provided a deep, thorough massage. It was very relaxing and I hated to see it end.

We were then led to separate shower rooms. We had no idea what to expect and since we speak only English and our therapist spoke only French, the therapist had to rely on hand signals and position demonstrations in providing instructions to us. She was clearly accustomed to this as she did a great job posing for us and helping us get into the proper position for the Jet Shower treatment.  I was positioned at the back wall of a 10 x 6 foot tiled room. Using seawater heated to 91 degrees, the therapist, who was sitting on a stool about 7 feet 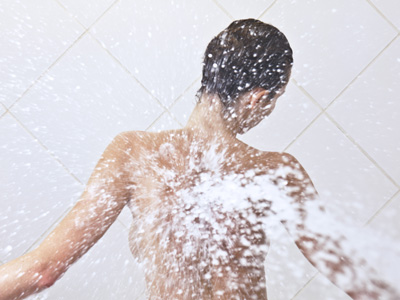 away from me with a very high pressure hose, sprayed me down with long, well placed strokes. She had me position myself from side to front to other side to back. She sprayed just about every inch of my body with this hard, tingling water jet. My husband describes it as a human car wash.

We were then encouraged to go to the adjacent swimming pool for an invigorating swim, but we, instead, went back to our room for a freshwater shower as we had afternoon plans.

We had just a tiny taste of Thalassotherapy; most people come for a week or at least a few days of varied treatments, including seaweed wraps, whirlpool baths, Vichy Mist showers, and more.  Beauty treatments are also available at the Thalassa Sea and Spa centers.

Would I recommend Thalassotherapy for American tourists? Absolutely. It is a different experience than that at American spas; based more on health and fitness than on pampering, but it was invigorating and a chance to experience a slice of French life.

Written by Terri Fogarty for EuropeUpClose.Com

Surf's Up at France's Basque Coast

[…] offers wide, sandy beaches as well as an old fishing port, lots of opportunities for Thalassotherapy, and good shopping and restaurants. Thalassotherapy is a popular hydrotherapy spa treatment using […]

[...] stayed one night in Le Grau du Roi and had our first Thalassotherapy experience. We had no idea that this area, set right in the Petit Camargue, is a major resort area; it [...]

wow. i so need this. thank you!

This sounds great, a treatment I've never tried. I am ready for a seaweed wrap and human car wash, if I can do it in France.