Munich is one of the most charming cities in Germany. Located in the south near the alps, it is the capital of Bavaria and the most visited city in Germany. Two days is not enough time to see all there is to see and if you want to do some day trips from Munich, you can easily spend a week in Bavaria’s lovely capital. 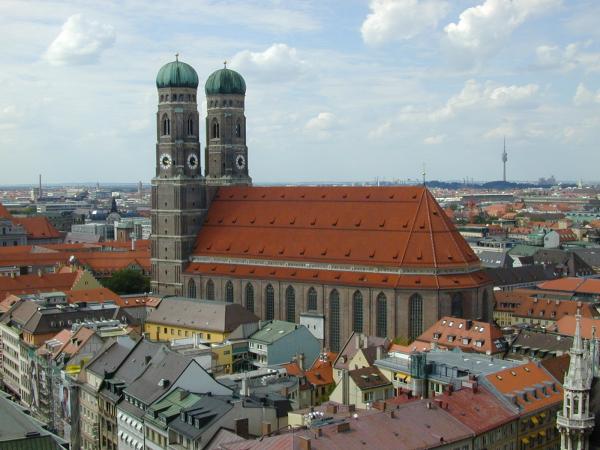 A few Surprises about Munich

One thing we noticed is that unlike in Paris, most people do not speak English. We were able to get by with our little phrase book and since most restaurants have English menus, we could order without the fear of eating some unfamiliar animal part.

Another surprise is that, for many Germans, it is never too early for a glass of beer. We took the night train from Brussels to Munich and got off the train at around 7 am. along with hundreds of people getting off commuter trains on their way to work. We couldn’t help but notice that many stopped off at the train station Deli for a morning brew (and I don’t mean coffee.)

You can discover much of Munich by foot, but it has an excellent public transportation system that is easy to use. Old town is located within the ring-road and the historical center of Munich is the Marienplatz. Here you will find the main tourist sights including the magnificent Marienplatz with its beautiful city hall. Stay for the famous Glockenspiel, which takes place at 11 AM, 12 PM and in the summer months at 5 PM as well.

Before you book your hotel, also read our recommendations on where to stay in Munich.

What to see in Munich 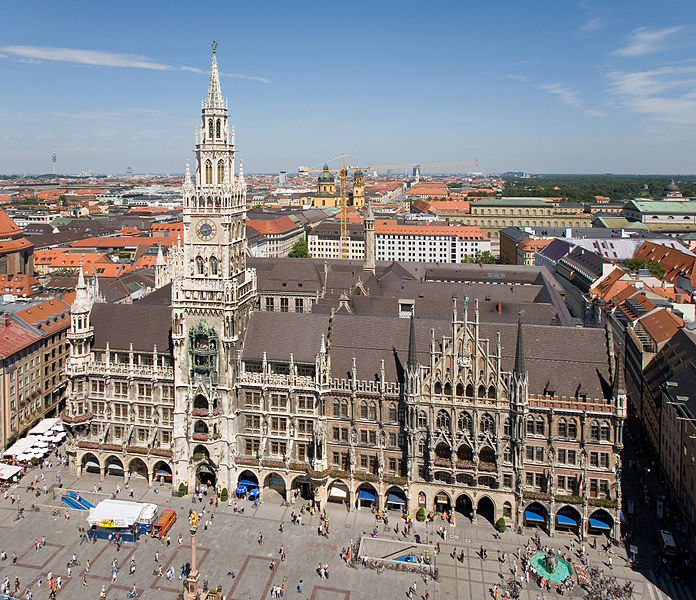 Marienplatz
Marienplatz has been Munich’s heart ever since the city was founded by Henry the Lion in 1158. It once served as a salt and grain market, but is now a magnet for tourists who flock here to marvel at the carillion of the town hall. The town hall tower bells peel at 1pm (and at midday and 5pm in the summer) and depict Duke William V dancing with Renata von Lothringen. Marienplatz is the true center of the city.
Marienplatz 8
Innenstadt
Neighborhood: Altstadt
Nearest Train: Marienplatz: S1-S8, U3, U6, Bus 52

Altes Rathaus
The old Town Hall is located on the eastern side of Marienplatz. It is a prime example of Bavarian Gothic architecture. It now houses the Toy Museum.
Marienplatz 15
Innenstadt
Neighborhood: Altstadt
Nearest Train: Marienplatz: S1-S8, U3, U6, Bus 52

Neues Rathaus
One of Munich’s best-known landmarks, the Flanders Gothic style Neues Rathaus (New Town Hall) was built during the period of architectural revival in Germany from 1867-1909. The carillon is built into the 260-foot tower and performs at 11am and 5pm every day, with 32 figures portraying a knightly joust and dance. There are additional ‘performances’ at midday and 5pm between May and October. The viewing point on the ninth floor can be reached by lift and is open from 9am-4pm Mon-Thu and 9am-1pm Fri.
Marienplatz 8
Innenstadt
Neighborhood: Altstadt
Tel: +49 89 23300
Nearest Train: Marienplatz: S1-S8, U3, U6, Bus 52

Alter Peter (St. Peter)
Alter Peter (Old Peter) of is the oldest parish church in Munich. Look inside for some old masters art from 6 centuries. If you manage to climb the 302 steps to the top of its tower, you will have a fantastic view of Munich and, on clear days, the Alps.
Rindermarkt 1
Innenstadt
Neighborhood: Altstadt
Tel: +49 89 2604828
Open Hours: 7.30am-7pm Mon-Sat; midday-5pm Wed
Nearest Train: Marienplatz: S1-S8, U3, U6, Bus 52

The Residenz originated as a small moated castle, built in 1385, and was gradually expanded by the Wittelsbach rulers who used it until 1918 as their residence and seat of government. The Residenz was heavily bombed in the Second World War. Reconstruction began in 1945 and the works of art were returned as far as possible to their original locations. This is a must-see for all its historical importance and its over-the-top splendor.
Visit the Antiquarium (Hall of Antiquities), which is the largest secular Renaissance hall north of the Alps. You will see early 17th-century rooms including the Reiche Kapelle (Ornate Chapel), the Steinzimmer (Stone Rooms) and the Trierzimmer (Trier Rooms), the Rococo Rooms (Ancestral Gallery and Ornate Rooms by François Cuvilliés the Elder) and the neoclassical Kà¶nigsbau (King’s Tract) created by Leo von Klenze. Special collections such as silver, ecclesiastical vestments and porcelain from the 18th and 19th centuries and East Asia are also on display.
The Treasury displays the Bavarian Crown Jewels, goldsmith’s work, enamels, crystal objects and ivories collected by the rulers of Bavaria.
Open Daily: April-15 October: 9 am-6 pm 16 October-March: 10 am-4 pm
Residenzstraße 1
80333 München
Tel: 0 89 2 90 67 1

Isartor
The oldest of Munich’s city gates was built in 1337 and served as a fortification for the defense of the city under Kaiser Ludwig of Bavaria. It is the only gate to remain in its original form and is one of the few remaining landmarks from that period. The Isartor was restored between 1833-35 by Friedrich von Gà¤rtner. The frescos, painted in 1835, depict the victorious return of Kaiser Ludwig after the Battle of Ampfing in 1322. The building now houses the Valentin Museuum.
Tal 50
Innenstadt
Neighborhood: Altstadt
Tel: +49 89 223266
Open Hours: 11am-5.30pm Mon, Tue, Fri, Sat; 10am-5.30pm Sun
Nearest Train: Isartor: S1-S8, Tram 17, 18

Friedensengel (Angel of Peace)
Built in 1896-99 and funded by the City of Munich, this monument celebrates the 25th anniversary of the Treaty of Versailles (1871). The golden mosaics in the hall depict nation, war, peace and victory. The Friedensengel, or Angel of Peace, provides a spectacular view of the city.
Prinzregententerasse
Bogenhausen
Neighborhood: Bogenhausen
Nearest Train: Pinzregentenplatz: U4

Olympiapark
Built for the 1972 Olympics, this landscaped park contains sport facilities, lakes, bicycle paths, concert venues, restaurants and a football stadium, as well as its landmark “tent-style” roofs. The Olympiaturm tower is the tallest building in Munich, just 10m shorter than the Eiffel tower. It offers a great view of the city and is open 9am-midnight, with the last ascent at 11.30pm. On a good day it is possible to see the Alps; there is also a rotating restaurant
Spiridon-Lois-Ring 21
Olympiastadt
Neighborhood: Olympic City
Tel: +49 89 30 67 24 14
Nearest Train: :Olympiazentrum: U2&U3

English Garden
This 900-acre park has shaded paths, brooks, ponds and swans , but is famous for its four beer gardens (Chinesischer Turm, Seehaus, Hirschau, Aumeister) and its nude sunbathers.

Hofbrauhaus
No trip to Munich is complete without a trip to the Hofbrauhaus. This beer hall has existed since 1644 and offers beer, food, oom-pah music, drunken revelry, Lederhosen and last but definitely not least…tourists.
Note: In Bavarian restaurants, tables labeled “Stammtisch” are reserved for regulars.
Am Platzl 9
80331 München
Tel. +49(0)89/22 16 76

Jewish Synagogue
This new structure, dedicated in November of 2006, brings an important cultural and religious healing to Munich. Sixty years ago, Munich’s main synagogue was destroyed upon the personal orders of Adolf Hitler. In March of 2007, the Jewish Museum and Jewish Center opened.
Jakobsplatz 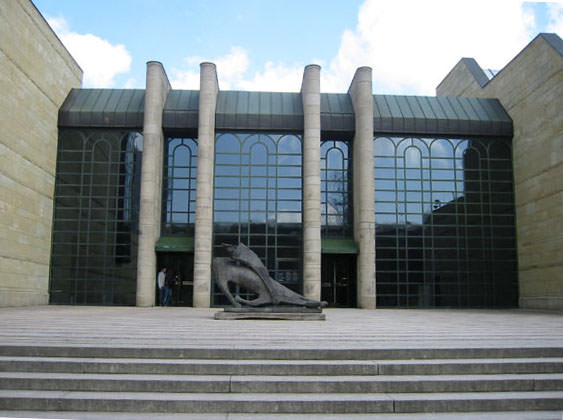 Munich’s art quarter is home to no fewer than six museums.

Alte Pinakothek
One of the world’s most important galleries, the Alte Pinakothek hold more than 700 paintings from the 14th through 18th century. Some of the artists represented are: Durer, Holbeein, Rafael, Botticelli, Rembrandt and El Greco.
Barer Strasse 27
D-80799 Munich
Tel: 49 0 89 23805 216

The German Museum
With 28,000 exhibits from more than 50 areas of technology, the German Museum is the largest science and technology museum in the World.
Museumsinsel 1
80538 München
tel: 49 89 2179-1

Staatliche Antikensammlungen
The State Collection of Antiques specializes in small objects, such as glassware, gold and silver. The internationally renowned collection of antique and Etruscan vases, based on King Ludwig I’s collection, is outstanding. It was Ludwig who, in 1838, instructed architect Georg Friedrich Ziebland to design this temple-like building. Destroyed during the War, it was rebuilt and reopened in 1967.
Konigsplatz 3
Innenstadt
Neighborhood: Maxvorstadt and Schwabing
Tel: +49 59 98 88 30
Nearest Train: Konigsplatz: U2, U8

Average high temperatures through the year run from low of 34F in January to a High of 72F in July and August. Precipitation is distributed throughout the year. 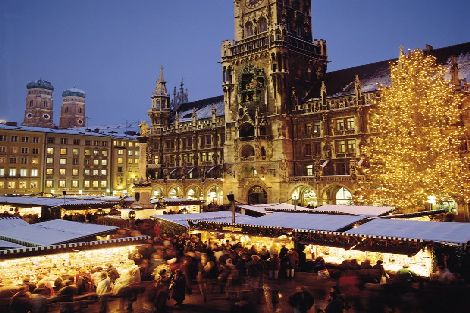 Munich Opera Festival
Munich’s opera festival, held every June and July since 1875, brings visitors from across the world to experience a wide range of operatic work.

Christopher Street Day in Munich
On Christopher Street Day (CSD), the gay community from around the world, comes to Munich to celebrate. It honors the day in 1969 when gays and lesbians took to the streets of New York to demonstrate against discrimination. Celebrated in Munich since 1980, more than 200,000 visitors come to Munich every year to enjoy the open-air events at Marienplatz and Rindermarkt.