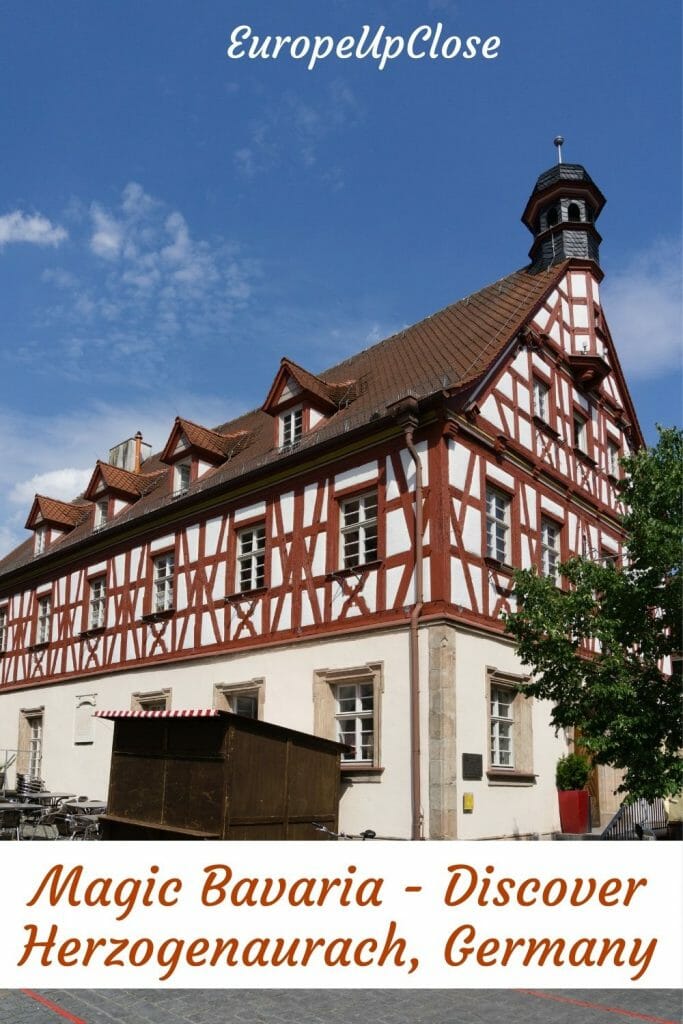 Herzogenaurach, a charming town in Middle Franconia, Germany has a rich history as a significant medieval center and it also takes pride in its more recent status as a site of a United States Army base.

The historic center is known primarily for its half-timber homes and numerous medieval structures which have been in continuous use for centuries. Written records for Herzogenaurach date back to the 11th Century, and two towers from the Middle Ages still stand, the Fehnturm and Türmersturm.

Many historic half-timbered houses have been well preserved, the oldest dating back to the middle of the 15th Century. Typically, wealthy inhabitants built their homes entirely of stone, but for the majority of Herzogenaurach residents, housing constructed with walls of timber filled in with clay was a more economical approach. A more extravagant building still stands within the city, a Baroque castle built in 1720 at the request of the Prince-Bishop.

Herzogenaurach, with its long tradition as a fervently Catholic town, proudly features St. Magdalena, a historic church containing a Baroque altar and painted wooden vaults described as some of the most impressive in all of Franconia.

Catholic holidays and festivals are held with great flair and spectacle. During the festivals, statues of various saints are marched through the streets to commemorate feast days and other religious holidays. These events typically draw attendees and spectators from across the region.

Herzogenaurach served a more recent historic role as home to a Deutsche Luftwaffe airbase before and during World War II, and as an American military base immediately following the war until 1992.

Many U.S. military bases sprung up across Bavaria and the whole of Germany during the second half of the 20th Century. Herzogenaurach stood out, however, as having a very active and progressive German-American Club. As a consequence, the town celebrates cultural events significant for both countries, such as Fourth of July cook-outs and Oktoberfest festivities.

The city is home to two of the world’s largest sportswear companies, Adidas and Puma. Brothers Adolf (Adi) and Rudolf (Rudi) Dassler began manufacturing athletic shoes in the 1920s, even equipping several athletes in the 1928 and 1936 Olympic games.

Following a falling out in 1948, the brothers ended their collaboration and created their own companies. Adi formed Adidas while Rudi initiated Puma. Both companies still maintain their headquarters in Herzogenaurach as well as large factory outlet stores. Locals, regional residents, and tourists travel to these outlets to shop for sportswear items at discounted prices.

In addition to the draw of historic structures and the shopping centers of Adidas and Puma, many visitors from across Bavaria come to Herzogenaurach for recreation activities. One of the many attractions is Atlantis, a water park frequented by children and adults alike.

Waterslides and wave pools draw hundreds of visitors during the warmer months, while sauna facilities and thermal pools are popular during the bleak German winter. Herzogenaurach also boasts a golf course (considered a luxury by many Germans), tennis courts, and many other outdoor sporting opportunities.

Herzogenaurach, like many towns in the Franconia region, is a charming, well-preserved hamlet. But its significance today is clearly centered on its recent service as a military base and the birthplace of two huge sporting goods companies. Visitors to Herzogenaurach are routinely impressed with the seamless melding of a multi-layered historical past and its forward-looking present.

Stationed at Herzogenaurach 1967-69. Son Justin born in 1968 in Nurnburg. Would very much like to hear from David Murray and Bob Halvorsen from that same time

I was at herzo 1958 to 1960 in the 183rd asaco attached to 318th. most of our people were in detachments out on borders. hads 400 men listed as being on the T.O.E. H ad 4 tricks 058's in hanger doing trick work, some 982'10 message center. also has the 6th field station on base dont know their function. wasnt supposed to know. was the best duty I had with agency. would like to go back and do it all over again with curly Hanson the first shirt, Lt. johnson and his ugly green VW and Major Leroy skaith our jock happy company commander. Also miss the tank burgers at snack bar and my favorite uso girl,Cathy the red head.

I was at Herzo in 1963-64, on the Czech mission. Spent last days tdy at Hohenbogen. Went back last fall with Herzo vets tour. Spent two days in Prague, a lovely town. Germany is still lovely and is more prosperous, the economic leader of Europe. I was happy to see that the people have gotten past the shame they felt after the Hitler era. I didn't know but it took 65 years after the war to rebuild the main church in Wurzburg. Good and beer still delicious as ever !

Thanks for sharing your insights, Larry.

I was stationed with the 318th ASA in Herzogenaurach from January, 1970 to January 1972. I lived off-base at 23 Bergstaller Weg with my spouse. We loved the town and the towers. A bit of a confession; I have the key to one of the towers! I had forgotten this fact until I saw the photos of the towers. I will have to look and see where it's actually located in our home storage area. I "liberated" the key while walking the main avenue after an evening of beer and brats in one of the local establishments. I and two other GI's were walking along the street and I saw the key yet in the main door to the tower closest to Herzo Base. What was one to do? Well anyway, it's still in my possession!