The Eiffel Tower or Tour Eiffel symbolizes Paris now, but when it was built for the Universal Exposition (World’s Fair) in 1889, it was expected to be torn down within 20 years. The main thing that saved it was technology. Wireless transmissions, sent from an antenna on the tower, could travel far, so the French government decided it would remain as a permanent structure.

>>Did you know that there are many hotels in Paris with views of the Eiffel Tower – for any budget! If you are looking to make your trip to Paris extra special, take a look at these options! 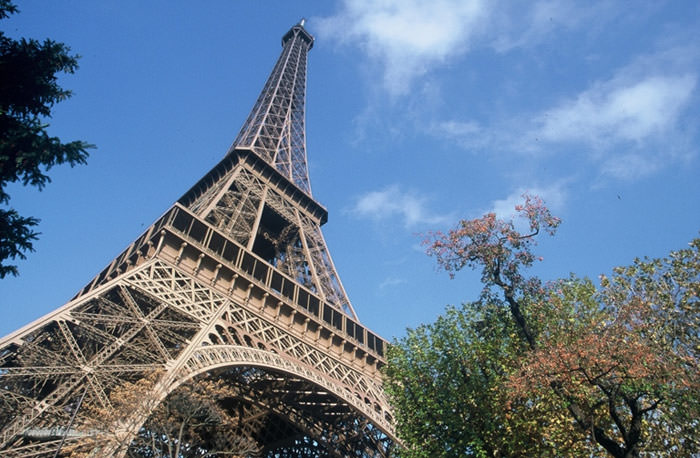 Gustave Eiffel was a genius at designing bridges and metal structures, including the structural framework for the Statue of Liberty. In his famous tower, which won over 700 other designs in the competition, he created open lattices and shapes that were unfamiliar in the late 19th century.

Naturally the monument was promptly declared a monstrosity, a hideous eyesore.  But over time, it came to be seen as a great Parisian landmark on the Champs de Mars, beside the River Seine and across the river from the Trocadero. At 320 meters high, it was the tallest man-made structure in the world until 1930, when New York’s Chrysler Building went up.

Hitler at the Eiffel Tower

There’s a famous photograph of Adolf Hitler at the Eiffel Tower, after the German army occupied Paris in 1940. However, if Hitler had wanted to get to the top of the tower, he couldn’t ride the elevator. The French cut the cables before he got there. The repair parts, they said, no doubt with a Gallic shrug, were impossible to obtain because of the war. They also said that Hitler conquered France, but he couldn’t conquer the Eiffel Tower. In 1944, shortly after the Allied forces liberated Paris, the elevators were working as usual. 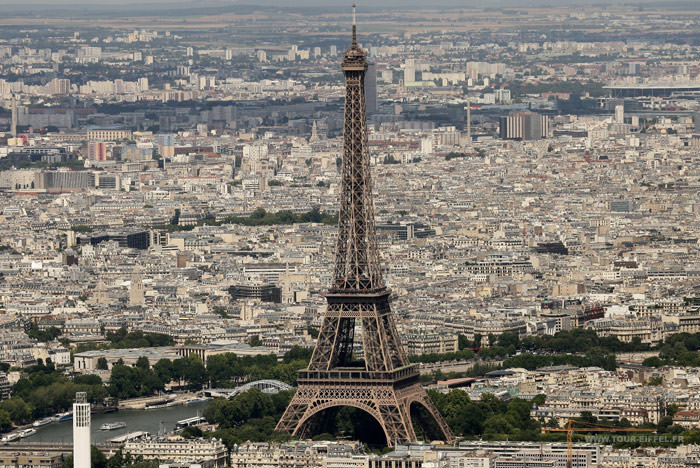 The Eiffel Tower is open daily, from 9 am to midnight in summer and slightly shorter hours the rest of the year. Admission is charged for each level, and the elevator costs more than walking.  It’s wise to buy tickets in advance, to avoid waiting lines. You can buy tickets on the Tour Eiffel site. You can ride the elevator all the way or climb the stairs to the first and second levels and take the elevator for the last part.

The first level has a gift shop, restrooms, and a restaurant, Le 58 Tour Eiffel, serving traditional French cuisine. Its large windows look toward the Trocadero. Reservations are strongly encouraged, as far in advance as possible.  The restaurant is fairly expensive, but not in the pricey realm of Le Jules Verne, the Alain Ducasse restaurant on the second level.
The first thing you need for the Jules Verne, other than a thick wallet or healthy credit card, is a reservation, preferably months ahead. Dress up for this one; it’s a special place (and jackets are required). This Michelin-starred restaurant is reached by private elevator, which whisks you up to a romantic setting with Paris at your feet. In the evening, the lights are dimmed so nothing detracts from the grand city views. The food is imaginative, contemporary French cuisine with a fine selection of French wines.

Whether you’re on the inside looking out, or on the ground with the festive crowd looking up at the tower, so fabulously illuminated at night, you know that Monsieur Eiffel had the right idea. And you understand why all the world wants to visit Paris.