Most people who visit Greece have made a pilgrimage to Delphi, the most important oracle of the ancient world on Mt. Parnassos. However, not many people know about Dodoni, the country’s second most important oracle, tucked away in the mountains of Epirus, in north-east Greece. I’ve visited Dodoni on several occasions. The best way to reach the ancient site is via Ioannina. Once an Ottoman city located beside a vast lake, Ioannina itself is well worth a stop-over. 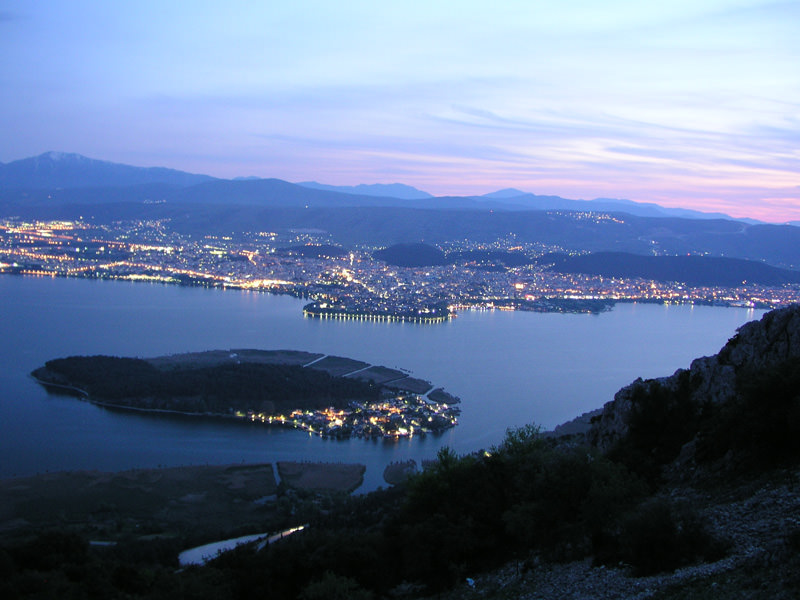 I travelled to Ioannina by bus from Thessaloniki. The trip takes seven hours, through the Vale of Tempi, a 12 km long, beautiful valley between Mt. Olympus and Mt. Ossa. Here’s where the Persian King Xerxes gained entry to Greece in 480 BC. The route passes through the Thessalian farmlands, rich with crops of vegetables and vineyards. At Kalambaka, the bus stops, allowing a view of the high rock spires of the Meteora that rise like stone fingers out of the Thessalian plain.

Leaving the plains, the highway climbs and winds up the steep mountains of the Pindus Range. This is the region of Epirus, reaching to the Ionian Sea to the east and north to the border of Albania. It was once the kingdom of the Molossians, the domain of Queen Olympias, Alexander the Great’s mother.

The road coils steeply up the mountains to dizzying heights, with precipitous cliffs that drop into a chasm to the valley below. Small villages, only their red roofs visible, cling to the slopes, isolated from the world in this wild mountain terrain. It was these mountain villages of Epirus who put up so much resistance during WWII and again during the Greek Civil War of 1948. Because of this, many of the villages were destroyed and all the inhabitants killed. A new road constructed at a lower altitude is called the Egnatia Road and is a continuation of the ancient road once traveled by the Romans across Northern Greece.

Ioannina is a small, picturesque city built on a hillside beside Lake Pamvotis. Founded in 527 by the Emperor Justinian, it has an interesting history and was once very prosperous as both a religious and intellectual centre. In 1430 it surrendered to the Ottoman Turks and still has some Turkish influence: a few old Ottoman mansions, some stone-built mosques, an old synagogue from the Ottoman era and the Kastro, Ali Pasha’s citadel. 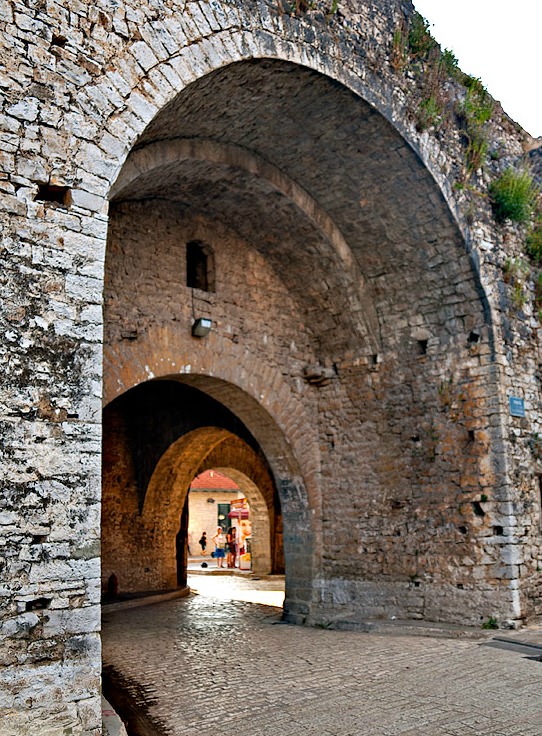 From the late 1700’s, for several years Ioannina was ruled over by the infamous Ali Pasha who was known for many his atrocities including drowning women in sacks. During the early 1880’s he was often visited by the young Lord Byron who spent some time in Ioannina. Byron is said to have enjoyed being feted by the Ali Pasha but he was well aware of the notorious deeds that had earned the Pasha the name “The Lion of Yiannina”.

Byron loved to swim in the lake, often swimming out to the small island of Nissi. There are several monasteries on the island including the Monastery of Pandelimous where Ali Pasha met his demise. Today there is no swimming in the lake which has become contaminated because of poor run-off. It is connected to the mainland by a waterbus.

One of the town’s interesting districts is the old bazaar and the Jewish Quarter. For many years there was a large population of Romaniote Jews living in Ioannina. During WWII over a thousand of them were deported by the Nazis to concentrations camps. Less than two hundred survived. There is a monument in their memory that has been constructed in the 13th century Jewish cemetery. I wandered the narrow lanes of the old Jewish Quarter where once there are still some silver smiths and copper shops. In the centre of the Quarter is a memorial to the deported.

I took a day-trip from Ioannina to the mysterious Oracle of Zeus at Dodona. There’s a local bus service but it doesn’t run frequently so I took a taxi the 21 kms to the archaeological site. The taxi cost €24 for a return trip and the driver waited for me at the site while I explored the ruins. 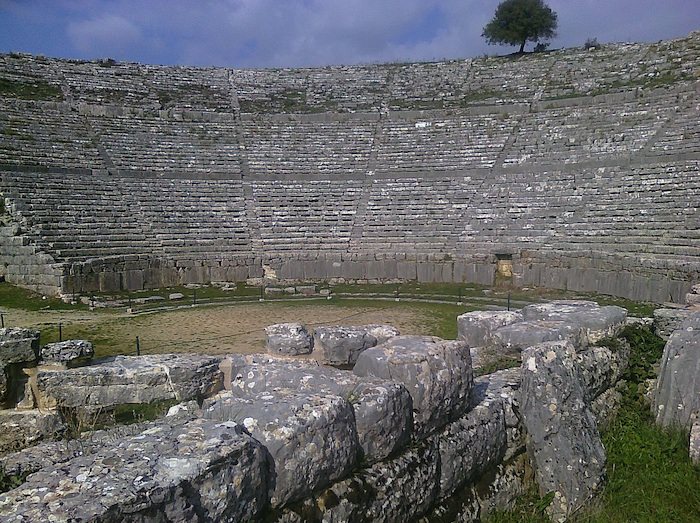 Dodoni was famous at the time of Alexander the Great. This was the home of his mother, Queen Olympias, who worshipped at the shrine, an ancient oak tree, the sacred oak of Zeus. It is the oldest shrine in Greece, a religious and oracular centre for the northern tribes and one of Greece’s most magical settings. Set in an enclosure of high mountains on a fertile valley at the foot of Mt. Tomaros, the Earth Goddess was first worshiped here as long ago as 2000 BC. Then Zeus took over. The story is that two doves flew from Thebes, Egypt. One landed in the oracle of Ammon at Siwah, and the other flew to Dodoni and landed in an oak tree. From the rustling of the leaves in the oak tree and the flight of birds that nested in its branches the diviners interpreted the oracles. Around 500 BC a temple to Zeus was built although archaeologists have recovered artifacts from as early as the Mycenaean era. Some of these are in the archaeological museum at Ioannina. 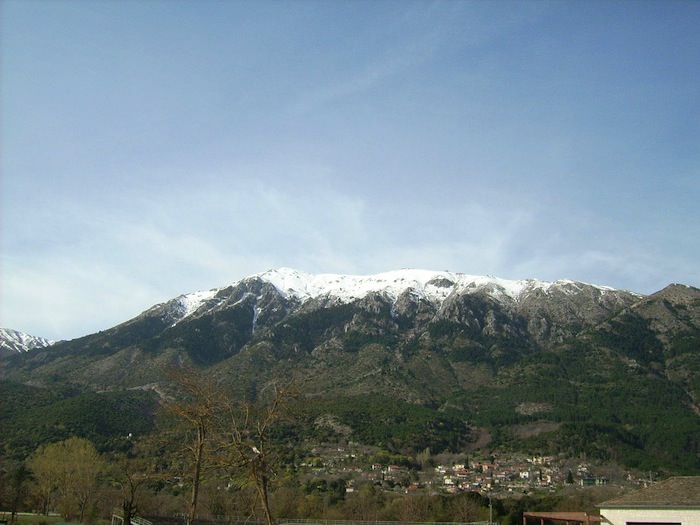 North of the shrine is an impressive theatre where performances are still held though these days they are often staged outside the theatre. There is also a 3rdcenury BC stadium. Nearby are the gates to the acropolis. Part of the walls still stand as well as the foundations of other buildings including a small temple dedicated to Aphrodite.

Pilgrims were still worshipping at the shrine up until 392 AD when the Emperor Theodosius closed all pagan temples and banned religious activities. The ancient oak tree at the sanctuary of Zeus was cut down. The long-hallowed pagan site must have retained some of its mysticism, because miraculously today there’s still an oak tree growing in its place inside the enclosure of the ancient shrine.