The Roman Emperor Hadrian is best known for building Hadrian’s Wall, which marked the northern limit of Roman Britain. He also rebuilt the Parthenon and constructed the Temple of Venus in Rome. In addition to these contributions to Rome, Hadrian built several important structures in the city of Athens. 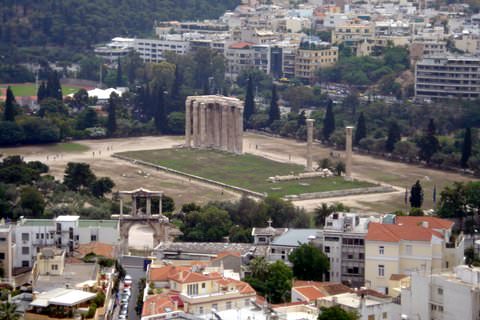 Hadrian was an ardent philhellene and lived for several years in Greece. He was archon of Athens from 125 – 129 AD and during that time he adorned the city with several imperial buildings. You’ll pass by them when you are touring around Plaka.

Hadrian loved literature, both Roman and Greek. He wrote poetry and was familiar with the Greek philosophers. And, he built a distinguished library in Athens that stands today. You’ll find it at the corner of Eolou and Adrianou Streets in Plaka. There was a large colonnaded court with semi-circular recesses in the walls. Part of the west entrance had Corinthian columns that still stand. The central room was the library with niches for bookshelves. The courtyard was laid out as a garden with a central pool. I love to stop by Hadrian’s Library whenever I’m strolling around Plaka, then sit in the tavern by the Eolou Street side and enjoy an ice-cold frappe under the shade trees before wandering over to the Roman Forum. 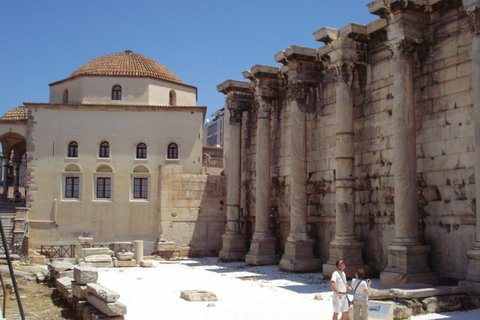 Rome had occupied Greece from 146 BC and by the first century AD, Greece had become a favorite holiday destination for wealthy Romans and a place of exile for troublemakers. The Athenian agora had a new Roman odeon, a covered theatre that seated 1000 people. There’s a bust of Hadrian in the Greek agora, on the west side near the Temple of Hephaestion. It’s a headless torso, but don’t try posing with it or the agora guards will chase you off! 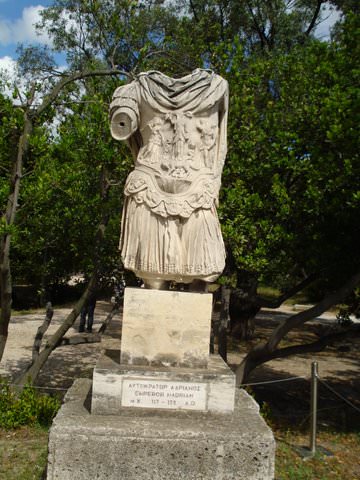 The entrance to the Roman Forum, which was built during the reign of Julius Caesar, is the Gate of Athena Archegetis. It marks the street leading from the Greek agora. On the side facing the Acropolis there is an engraved edict of Hadrian’s outlining rules and taxes for the sale of oil.

I like to wander about in the Roman Forum. The most intriguing of the ruins is the Tower of the Winds which predates the forum, designed by the Syrian astronomer Andronikos of Kyrrhos in the 1st century BC. It served as a compass, sundial, weather vane and water clock. Each face of the tower is adorned with a relief of a figure floating through air personifying the eight winds. Just below the Tower of Winds are the public latrines which I always find amusing. At the east end of the forum is an Ionic propylea dating from the reign of Hadrian. It was surrounded by colonnades which opened to shops and offices. During the Turkish period, a mosque was built on the north side that now serves as an archaeological storage room. 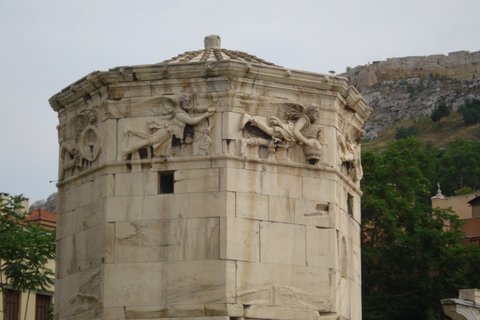 Probably the most distinctive piece of Hadrian memorabilia is near the busy road junction of Amalias and Syngrou Streets just outside of Plaka where the majestic Arch of Hadrian stands. It was erected by Hadrian to mark the limits of the ancient city and the beginning of Novae Athenae or Hadrianopolis, as it was called. The inscription on the south east side, facing the Acropolis, reads “This is Athens, the ancient city of Theseus”. On the northwest side, toward the tall pillars of the Olympieion, it reads “This is the city of Hadrian and not of Theseus.” The arch was adorned with Corinthian columns but only the bases remain. 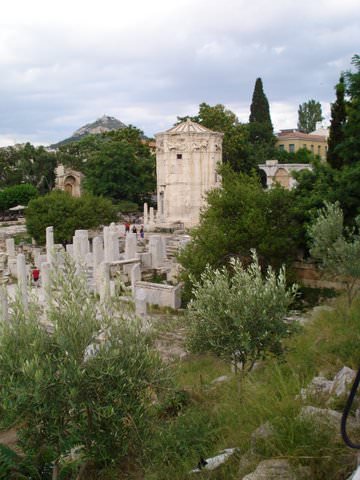 Roman Forum with the Tower of Winds

In the area that was Hadrianopolis there are still some Roman remains but the most significant sight are the towering pillars of what is left of the Temple of Olympian Zeus. Various rules had worked on the building over a span of more than five centuries but it was Hadrian who ensured the job was finished and it was he who had it dedicated.

The Olympieion, as it is known, is the largest temple in Greece. The Temple originally had 104 columns but only 13 remain. Hadrian dedicated it on his second visit to Athens in AD 130 and set up a chryselephantine statue of Zeus within the cella as well as a colossal statue of himself. I’ve often spent the afternoon wandering around in this ancient Roman ruin. You will still find remains of some houses and Roman baths. 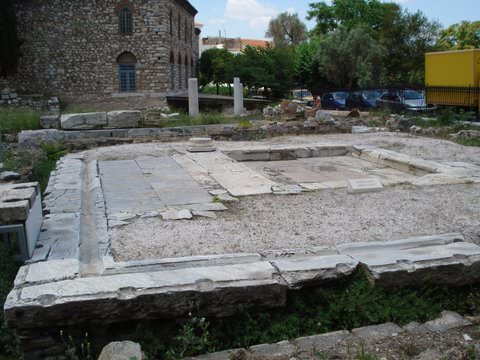 Roman latrines at the Forum

One of Hadrian’s ties to Greece was his close relationship with a beautiful Greek youth named Antinous. During a journey to Egypt, Antinous tragically drowned in the Nile River and Hadrian was devastated with grief. He made Antinous a demi-god and put statues of him in many places including Athens. There are busts of Antinous in the National Museum, but the most famous one is in Delphi museum. Hadrian had visited Delphi on occasions and made dedications there. The cult of Antinous became very popular in the Greek-speaking world. Some suggest Hadrian created the cult as a political move to reconcile Greece and Rome. He created a form of parliament to unite the former city states across Greece and Asia Minor. He even started a popular fashion, the beard, which symbolized philhellenism. Until then it was fashionable among the Romans to be clean-shaven. This new fashion lasted right until the reign of Constantine the Great. 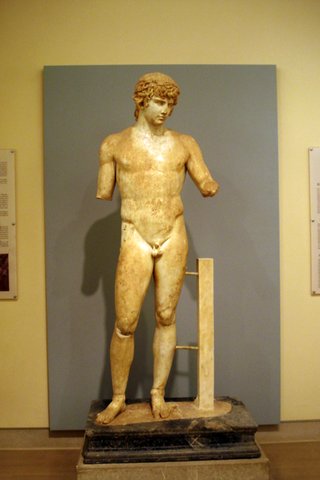 Antinous at the Delph Museum

Hadrian certainly left his mark in Greece, especially in Athens, which benefitted greatly from its imperial patron. One historian states that Hadrian’s era was the “happiest era of history.”

Going to Athens? Here are our top picks for where to stay while in Athens

He's such an interesting historical character. And yes, there are reminders of him all over Athens

love this! i had no idea that he was so influential in athens.