The first time I drank grappa I was lost in the Trastevere neighborhood of Rome. My girlfriend and I eventually found a bar and we took the only two seats outside. I asked the owner what he recommended. Grappa he said. Ever since that first experience, I’ve admired the strong liquor. The small piazza on which the bar was located had the sluggish activity of mid-afternoon Italy, but with each tiny sip of grappa the activity of the neighborhood seemed to come alive. It was the perfect Italian moment: simple observations in a foreign country. 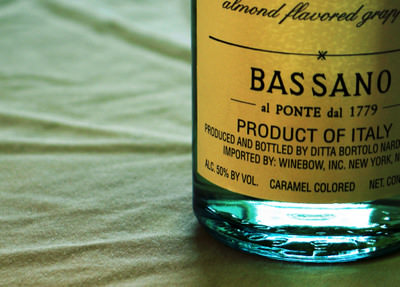 Grappa is made from pomace, which is everything left over from the wine-making process. Grape skin, seeds, and stems are immediately taken to a distillery. The stems are removed–taking their bitter taste with them–and the pomace is then put into large tanks with yeast and selected enzymes to carry out the process of fermentation, which is often temperature controlled. High quality grappa depends upon a quick distillation, so quality producers do not let their pomace sit around. The type of grape pomace used to make the grappa is often advertised on the label, including pinot noir, moscato, and even “Prosecco.” For the grape variety to be named on the label, the grappa must be made from pomace that is composed of at least 85% of the raw material of the named grape.

Grappa has a distinct flavor that is often described as harsh and which sometimes carries grape flavors. I love this combination and appreciate the burning character in little sips. “Strong like grappa,” as they say in Friuli. I would not, however, say that grappa has the depth or nuance of spirits like whiskey, tequila, or rum. Some producers age their grappa in oak barrels (you can easily distinguish this grappa by its golden brown color, while un-oaked grappa is clear) in an attempt to give 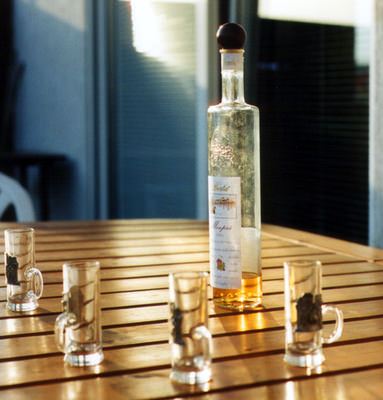 it more structure. The debate between the purists and innovators centers on whether grappa is better if it is oaked or un-oaked.

Though grappa has been around since the Middle Ages, it was considered a poor man’s drink until the 1970s. Grappa was simply a way for farmers to warm up the winter with the leftovers of the winemaking process. It originated in the Bassano del Grappa region in the Veneto region. Then Nonino distillery changed some of the basic grappa production process. They started making it from a single grape, instead of a bunch of leftovers from a variety grapes. Nonino initially specialized in the Picolit grape but now use many different types of grapes.

Besides the oaked or un-oaked question, the main distinction between grappas is whether or not they are labeled “Aquavite”. An aquavite grappa is made using whole grapes. Most of the time this results in a purer and more flavorful grappa. It has been my experience that both grappa and aquavite can be good or bad depending on the producer rather than the label.

Grappa is protected by the EU, like Barolo wine and Parmigiano cheese. Every bottle of spirits labeled grappa promises three things, 1) It was produced in Italy, 2) Produced from pomace, and 3) The fermentation and distillation occurred on the pomace; no water can be added.

I prefer to drink grappa neat, but it comes in many forms: on ice, chilled, and in espresso (called café corretto.) For me, the name grappa will always be synonymous with Ernest Hemingway, because the author regularly included the spirit in his stories.

Good but difficult question. I haven't heard of any festivals specifically dedicated to grappa. Most festivals feature one or two grappa stands but that's it. I'll ask around though.----Mattie

Two years ago in 2008, there was a two day Grappa Festival held in Italy at the end of November. I do culinary tours there and would like to include such a festival but I do not see any advertised. Do you know if there still exists a Grappa Festival?

Hi Jen, thanks for the comment. I'll have to warn you though, a café correto is strong stuff. Especially with breakfast. See you around----Mattie

Lovely piece. I adore grappa, but have never heard of a café corretto. Thanks for giving me something new to try next time I hit Italy.