The border between the United Kingdom’s two largest nations, England and Scotland, has been a contentious place for hundreds of years. It’s one of the world’s oldest borders, first established in partial form by the Treaty of York in 1237. Today, the area offers a number of interesting and unique areas for tourists to discover. Here are a few suggestions for both historic and modern day attractions to get you started.

Berwick Upon Tweed is one of the largest of the English border towns to the east, and being situated only 2.5 miles from the border itself, the city has been largely a controversial place, switching hands between England and Scotland numerous times. It is a lovely place though, with characteristics and charm from both nations. One of the most popular attractions is the city walls, which surround the old town. In medieval times the walls protected the city from attacks, but today they are home to a park which is on top of the walls, giving visitors the best view of the sea and surrounding countryside. On a nice day, there is no better place for a picnic than here. Another must-see is the three bridges that cross the River Tweed as it empties into the sea. The best view of them is from the harbour. And of course, being a seaside town, there are a couple of lovely beach promenades to be explored.

The Roman emperor Hadrian had a wall built in England during the Roman occupation to keep out the violent tribes in the north of Scotland. Parts of the wall remain today, although much of it lies in ruin. The area is in a rural part of England and is a treasure to explore; walking, cycling, or driving tours are all options, depending on the amount of time you have to spend. Be sure to check out some of the tiny villages and hamlets that dot the area around the wall, where you can find museums and attractions related to the wall excavations, as well as typical English pubs and cosy B&Bs.

Kelso is not far from the England border and is home to one of the famous Scottish Border Abbeys (other famous ones being in Melrose and Jedburgh).  The Kelso Abbey was built in the 12th century but suffered much damage in the 1500s. The tiny village of Kelso itself was dubbed “the most romantic if not the most beautiful place in Scotland” by novelist and poet Sir Walter Scott. 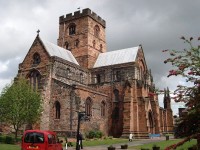 Carlisle is the largest town at the western end of the Scottish-English border. The city has roots back to the times of the Romans as an important settlement, and today features a charming cathedral and historic town center complete with city walls. It makes a good starting point for cycle trips and hiking. Also, the Tullie House Museum and Gallery has received good reviews for its gardens, architectural features, and great paintings.

Kelso isn't a tiny village. It's a town.

Berwick upon Tweed, on the North Side of the river Tweed, is in fact legally in Scotland. The English Parliament did a constituency change in the 1880's which included Berwick in the Northumbrian rolls, but it has not, and can not be part of England - legally anyway - suggest you correct the page after verification.

I would like to tour the Scottish country, including Glasgow and the England/Scottish border, Will I need any visa as I'm South African passport holder? I need to make sure I prepare myself and family adequately before we leave!

Another "great" sight around (more exactly at) the English-Scottish Border: Carter Bar. A classical tourist picture!

Hi Tom, We appreciate your comments. Ours is an evolving site and we add new information daily. I'd love to learn more of the Border Reivers. If you are interested in writing up a little history for us, we'd be happy to publish it.