If you have a passion for ancient history, Cartagena, Spain is a perfect destination. There are layers upon layers of history in this ancient coastal city. Located on Spain’s southern Costa Calida,  it was a naval port as far back as the 16th century and is still one of the most important in the western Mediterranean. Along with a base for warships and a shipyard, the port is now a major destination for cruise ships. 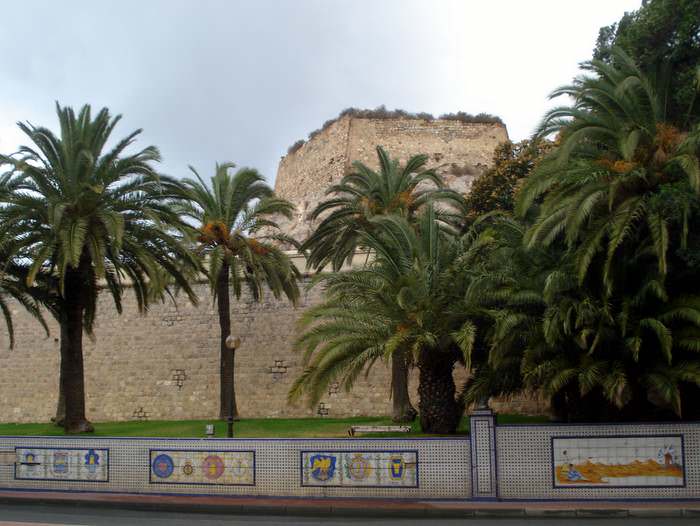 I wasn’t sure what to expect when I traveled to Cartagena recently on a day-trip, but what I experienced was enriching and definitely memorable. The city of Cartagena, founded in 227 BC by the Carthaginians, has been inhabited for over two millennia. It was from Cartegena in 223 BC that the Cartheginian general, Hannibal, one of the greatest military commanders in history, marched his invading army into Iberia and later set off with his elephants over the Alps to conquer Rome. 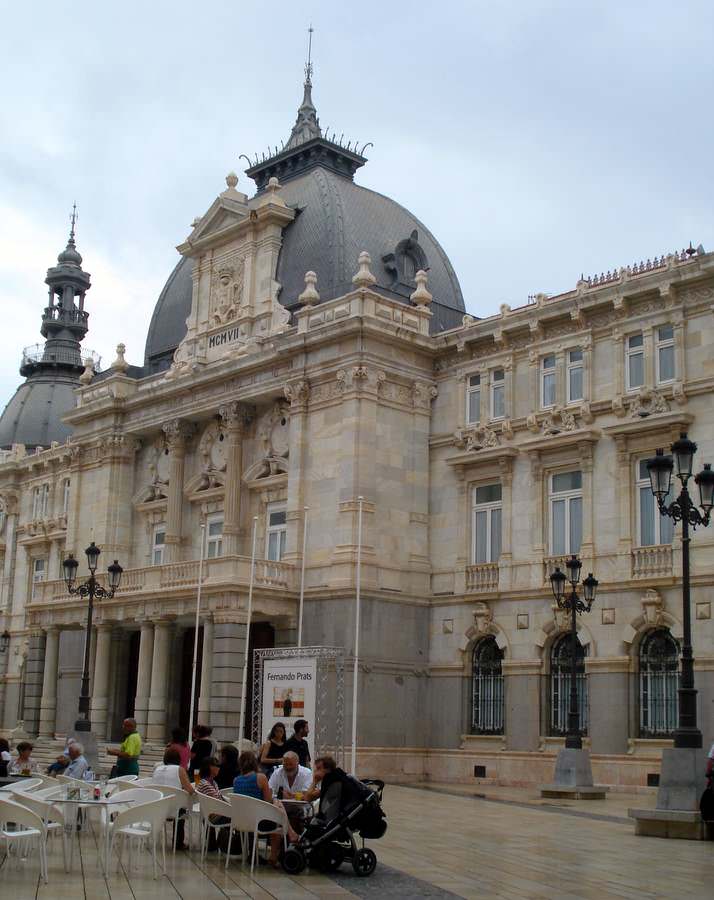 During the Roman Empire it was known as Carthago Nova (the New Carthage). Carthage was famous for its silver mines and the city prospered. In 298 AD the emperor Diocletian made it his capital city. Later, under Muslim rule it became an independent emirate of Cartajana. The city was finally reconquered by Christians in 1242.

Archaeological sites are abundant in the city, Roman, Cartheginian and Muslim. One of my favorite parts of Cartagena were the Roman ruins. I enjoyed an extensive tour around the Museo del Teatro Romano . As I walked around the well-preserved Roman theatre and climbed the tiers of marble seats I could imagine what it was like to attend a drama there. There is also a museum that includes Roman statues and artefacts and an underground passage with remains of walls, a Moorish dwelling and an ancient cathedral. There’s still lots remaining of Roman Cartagena including a whole town block and street linking the port to the forum. In a recently excavated house several important fragments of wall paintings were found. 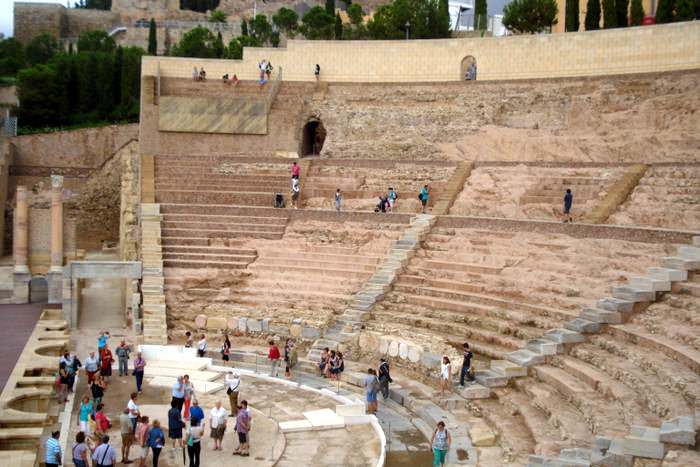 During the Punic Wars between Rome and Carthage, 264 BC – 146 BC a wall was built to protect the city. Today, the Muralla Punica (“sacred wall”) is built around a section of these old walls. The Romans referred to the Cartheginians as “Punicus” or “Phoenicus”, because of their Phoenician ancestry. These walls, built in the 3rd century BC are one of the few remains of the Cartheginian civilization in Spain. 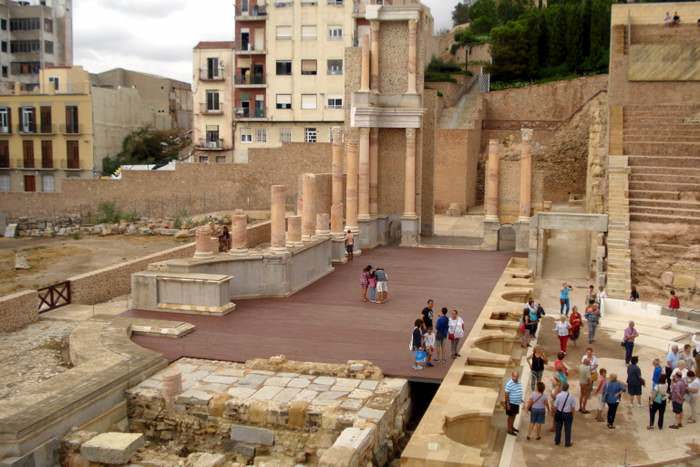 One of the most memorable tours was down into the eerie crypt of a 16th century hermitage where there were skulls and bones tucked into the wall tombs. As I entered the dim tunnel leading into the underground crypt, I felt a chill tingle my spine. And when I saw the skulls and bones openly exposed in the small alcoves I couldn’t help but gasp! 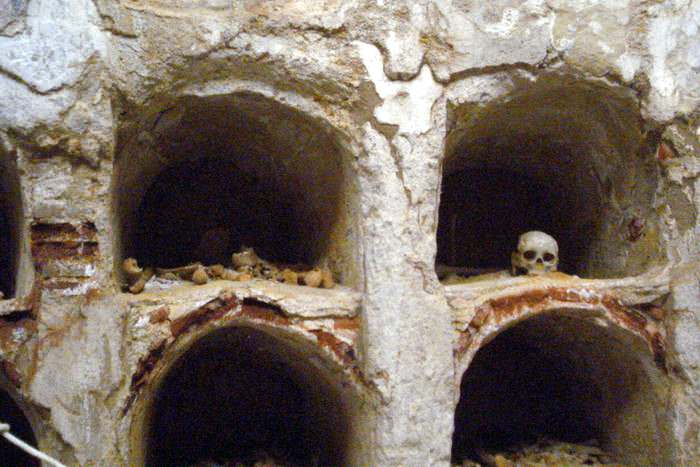 Bones in the Roman Crypt

Back out into the bright Spanish sunlight, I walked over to the Plaza Risueno where there are remains of an aristocratic Roman villa dating back to the 3rd century complete with fragments of painted murals, colorful mosaics and a partly excavated road. From there a palm shaded path lead me toward the harbor.

Cartagena’s harbour is one of the best in the western Mediterranean. Fish boats and yachts crowd the marina. The port has been used for thousands of years. A stone wharf where Phoenician traders docked their ships still remains. I stopped to visit the National Museum of Undersea Archaeology on the Paseo de Muella which emphasises the Phoenician and Roman eras. The museum has exhibits of amphorae and scale models of ancient vessels including a life size model of a Roman ship. 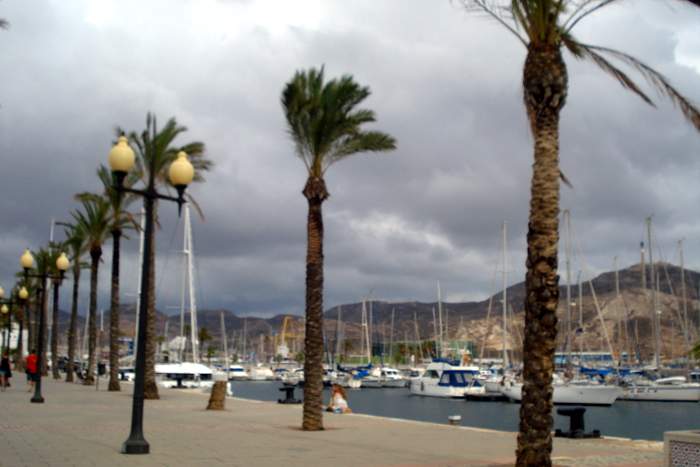 There are so many things to see in Cartagena it really takes more than just one day to appreciate them all. There are twelve museums, several noteworthy churches and monuments and not enough time to visit them all. I wish I’d had time to take the tram up the hill to view the sweeping panorama of the city from the Castillo de la Conception and rest in the garden where peacocks strut among the floral bushes. Instead, I strolled along the Calle Mayor admiring the many beautiful art deco houses, to the splendid Palacio Aguine, now an exhibition space for modern art. Here, I stopped to enjoy some Spanish tapas at a pleasant street café and savour my day’s exceptional tour of this fascinating, historical city.