It happened to be a rainy day when I drove with my friends from Mainz, Germany to explore some castles along the Rhine River; but a little rain wasn’t going to stop us from having lots of fun. The views of vineyards growing up the steep river banks and boats plying their way along the scenic shoreline seemed even more beautiful now that it was shrouded in a misty aura. 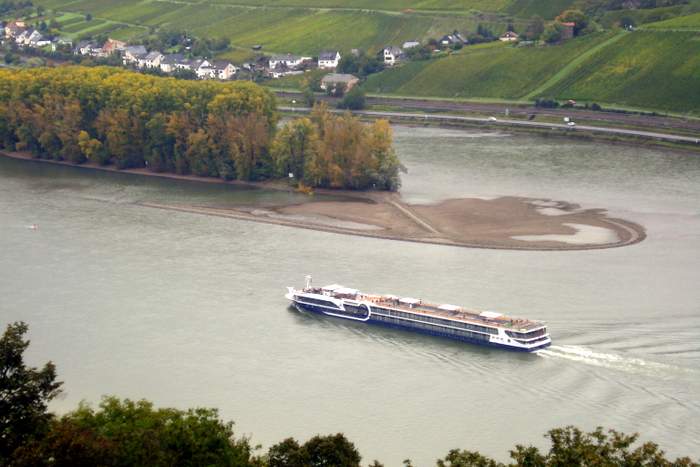 A river boat on the Rhine RIver

Our first stop was the Sooneck Castle, which was built as a neo-Gothic hunting lodge on the ruins of a Medieval castle by Prussian princes. Soonneck got its name from the Soon Forest that surrounds it. The castle was constructed in 1282, destroyed in the Palatinate War of Succession in 1689, and acquired by Frederick William, Crown Prince of Prussia and his brothers in 1834. 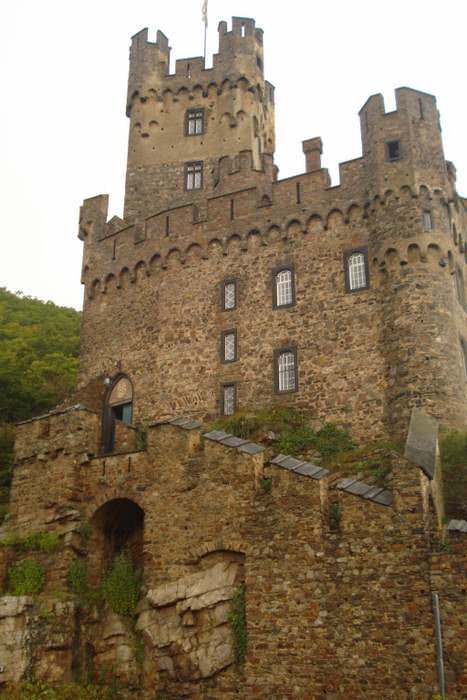 Exterior view of the Sooneck Castle on the Rhine

An amusing little Russian guide named Leo greeted us as we entered the castle and were showed various rooms. He explained all the artifacts on display from the long-bow hunting equipment to the bedrooms, which weren’t actually slept in but more for show. The castle is furnished predominantly with items of neo-gothic and Bvarious castle rooms. iedermeier styles. The walls are adorned with paintings including sketches by various famous German artists. 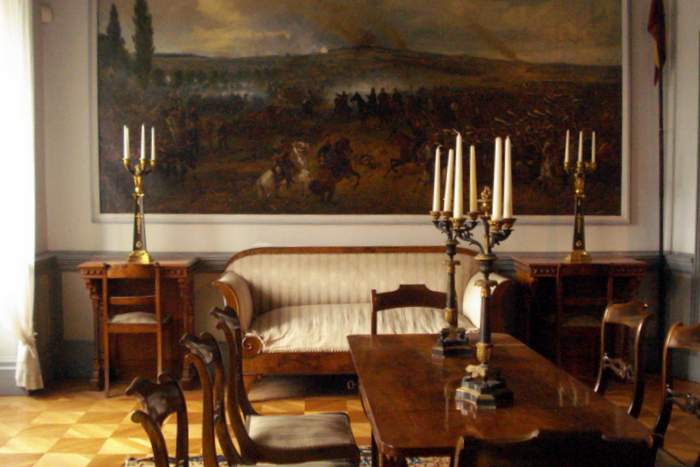 The lounge in the Sooneck Castle decorated in Biedermeier Style.

It was still raining when we left Sooneck castle but the weather began to clear by the time we reached the picturesque little Medieval town of Bacharach located where the Steeg Valley meets the Rhine Valley at a juncture near the old Roman road, the Aosonius Way. The area was first recorded settled in 1094 but was probably inhabited from antiquity. 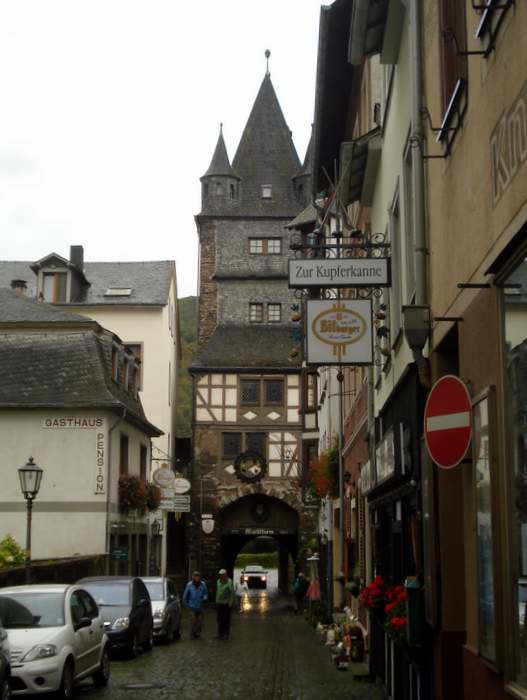 Road in the charming town of Bacharach, Germany

In the Middle Ages, the town of Bacharach, Germany was an important outpost on the Middle Rhine, an economically prominent site as a place of transfer, trade and warehousing for wine and timber. This romantic little town is one of the most lovely places in the Rhine Gorge and a popular tourist destination. We entered an ancient gateway through the original stone wall of the city. It was like stepping into a picture book, with quaint timbered houses, cosy wine taverns and narrow cobbled streets. 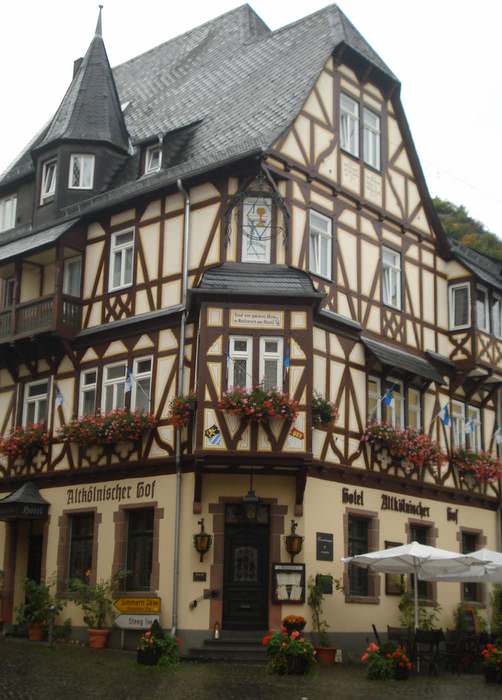 Located in the centre of Bacharach, the Lutheran Church of St. Peter is dated between 1230/40 but has gone through numerous changes and renovations.  It has a baroque style sacristy and is one of the most unique examples of Romanesque architecture on the Lower Rhine. The Church is surrounded by courtyards and open-timbered houses, many from the late Middle Ages. The town’s post office tower dates from the early 1400s. Above the church stands the ruins of the Chapel of St. Werner dating from the early 14th century and above that, looms the Stahleck Castle, a fortified castle dating to the 12th century. 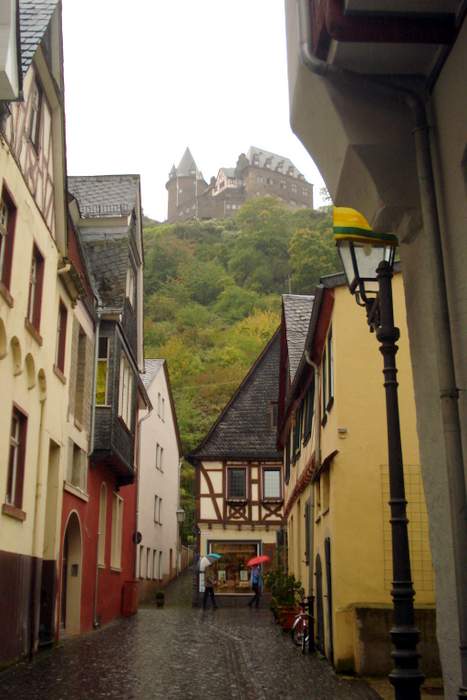 Street scene in Bacharach with the Castle Stahleck above

Before heading off to explore Stahlick Castle we stopped in a quaint restaurant where we were warmly welcomed by the gracious woman owner. I enjoyed a typical German meal of veal schnitzel and a tankard of beer. We could have spent the rest of the afternoon there in that cozy atmosphere, but it was time to do more exploring. 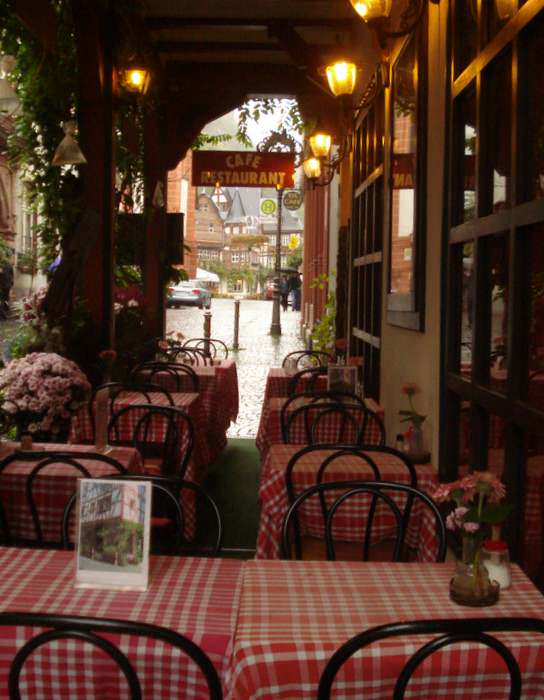 We enjoyed lunch at this quaint cafe in Bacharach

The road to the castle winds up the hillside through a dense forest high above the Rhine. We parked by the roadside and entered through the main castle gate. Today, the 12th century Stahleck Castle is used as a youth hostel, popular for family holidays and school trips. Children frolicked in the courtyard wearing capes and sparring with pretend swords. It is also a favorite stop-over of hikers and cycling groups. There are many events offered at the hostel including workshops, music camps and leisure games like tennis, pinball and table tennis. The castle also has full conference facilities. 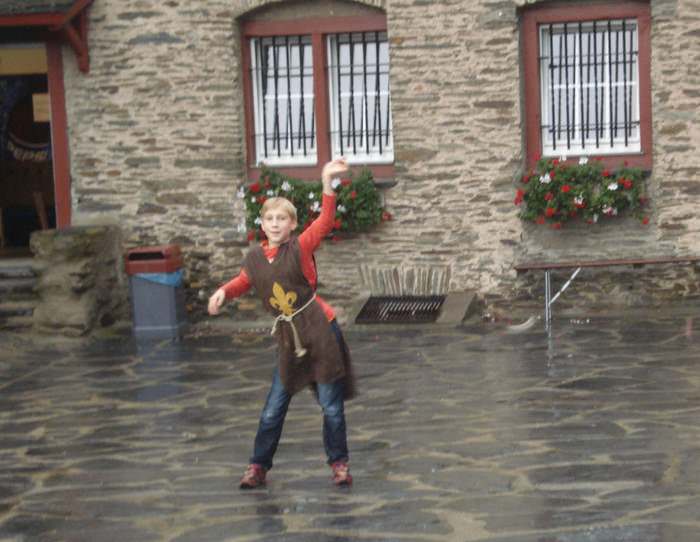 On our trip back to Mainz, we stopped at another castle ruin near the city of Bad Kreuznach with its panoramic views of the River Nahe and surrounding countryside. Castle Kauzenburg  dates to the 13th century and once housed the local nobility. A first-class hotel and restaurant has been built on the former castle site. 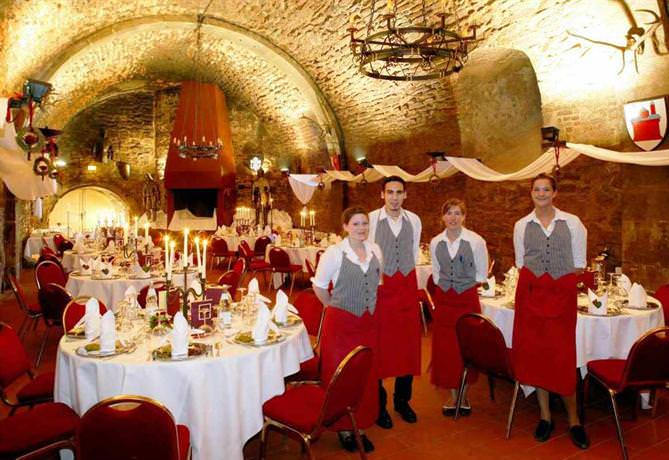 The hotel holds a gastronomical feast called the “Rittermahl” served at the old knight’s table in the well-preserved castle vaults. In spite of the rain, it was a wonderful day spent with my friends exploring some of Germany’s unique Middle Ages history.

Looking for affordable hotels along the Rhine Valley in Germany?

Written by and photos (except where noted) by W. Ruth Kozak