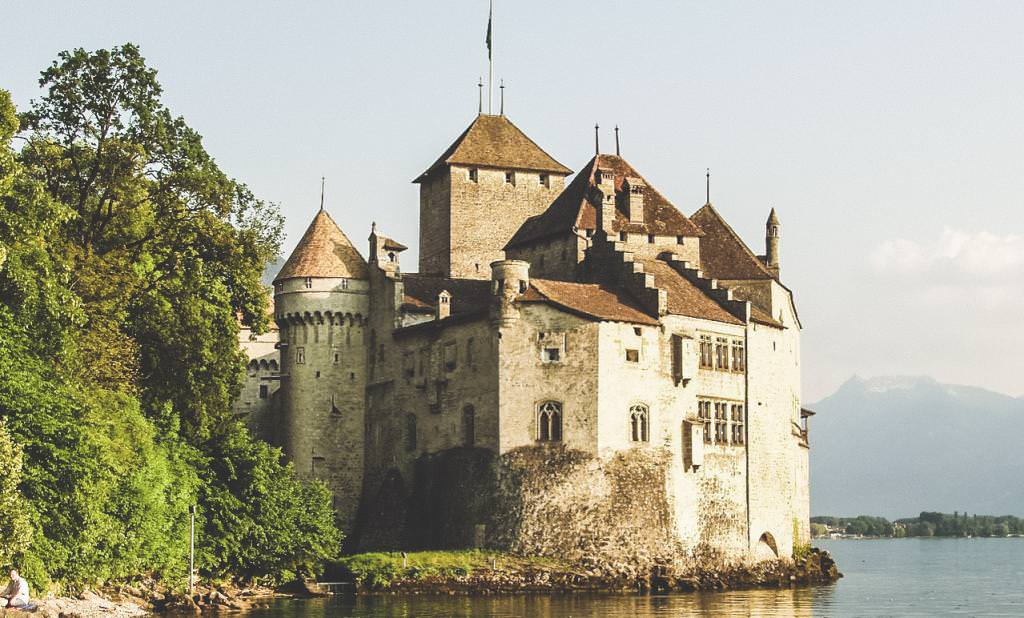 I’m still nursing a few blisters, but that’s before I learned how to explore Lausanne like a local. What I didn’t consider was that Lausanne is built on three rather steep hills, connected by bridges, narrow streets, vertigo inducing staircases and, if you are lucky enough to find them, the odd elevator. But Lausanne locals, as I learned from my guide, know short cuts, through the cathedral and the university, to mention but two.

Where to Stay in Lausanne 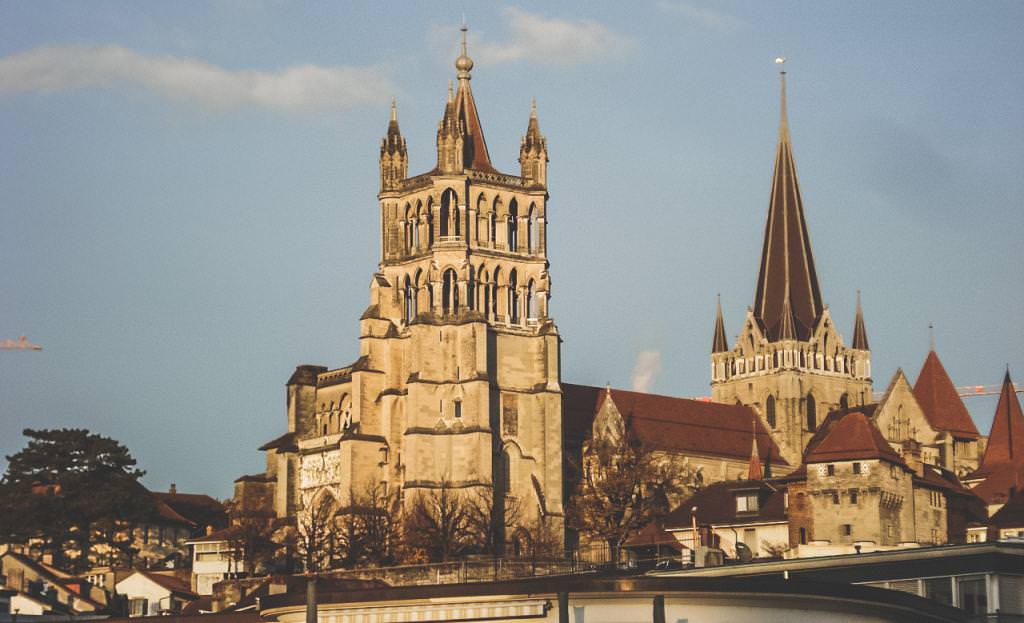 We start our Lausanne insider tour at the cathedral which harbors three secrets only locals are aware of. Considered one of the most beautiful Gothic buildings in Switzerland, go inside and look closely at the stained glass windows. You’ll notice faint traces of much bigger arches around them. In fact, during the Middle Ages, these were large openings which allowed wagons and animals to pass through, using the cathedral as a short cut to get to the markets of Flon and the port of Ouchy without having to make a big detour. 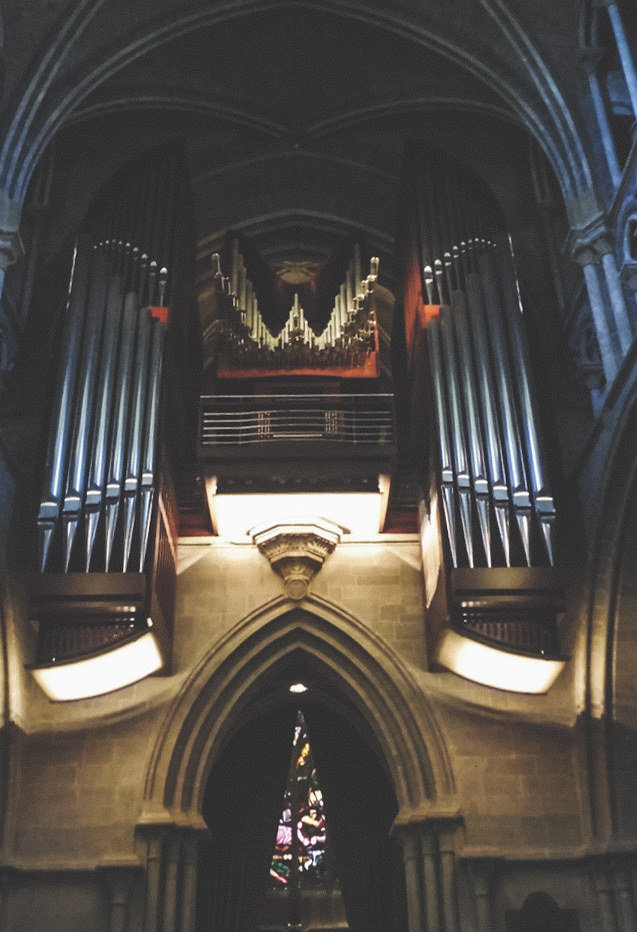 Next, you’ll notice the massive, shining organ. This instrument is unique in the world insofar as it has been designed by an actual designer who, interestingly, also worked for Ferrari. Hence the modernistic shape of angles wings. The organ features 7000 pipes, combines, also unique, all four usual organ styles and is the only one which was manufactured by an American company for a European church. The full potential comes to life during the many concerts of classical and modern music, including rock, which are performed in the cathedral.

If you are brave enough, you can climb the 224 stairs to the top of the bell tower to enjoy the panoramic view. One person who does so every night is the night watchman, or guet in French, who is secret no.3 of the cathedral. Since 1405 between 10 pm and 2 am he calls out the hour on the hour at the four cardinal points

Flon – The Old Town of Lausanne

Then, it’s time to explore Flon, the city center and the old town of Lausanne. We do so by descending the picturesque Escaliers du Marche, a steep, winding, covered, wooden staircase existing since the 13th century. Down is much easier than up, but if you get out of breath, you can have a rest in one of the many cafes which line the stairs on the West side. 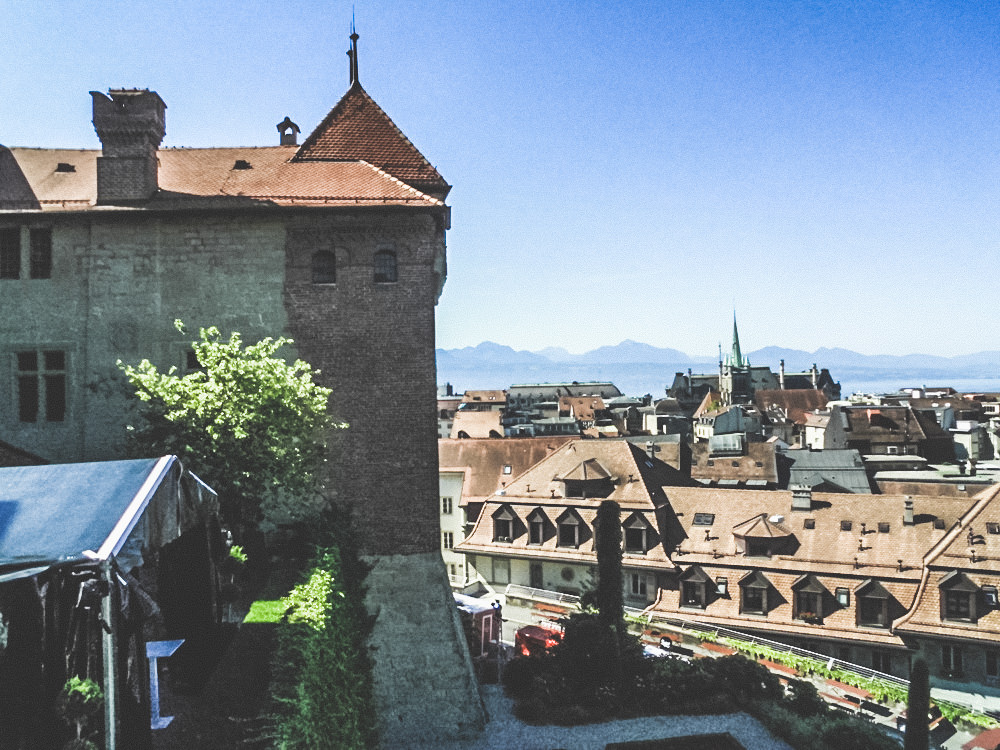 Flon is also the name of one of the two rivers which flow through Lausanne, but you don’t see any water. It was originally a wooded valley, but with industrialization, the valley was filled in, the river covered and Flon became an area of tanneries and warehouses. For a long time, it was considered as an ugly and even dangerous part of town, until a project took place to convert the warehouses into flats and offices. Many nightclubs also opened there, and today it’s the center of nightlife in Lausanne.

Our way leads us to the City Hall, where David Bowie married Iman without any press hype, because they announced it two days later and a Renaissance fountain in the Place de la Palud right opposite. The fountain is crowned by the colorful statue of Justice, but Swiss style. A maiden, dressed in a dirndl with golden braids wound around her head. 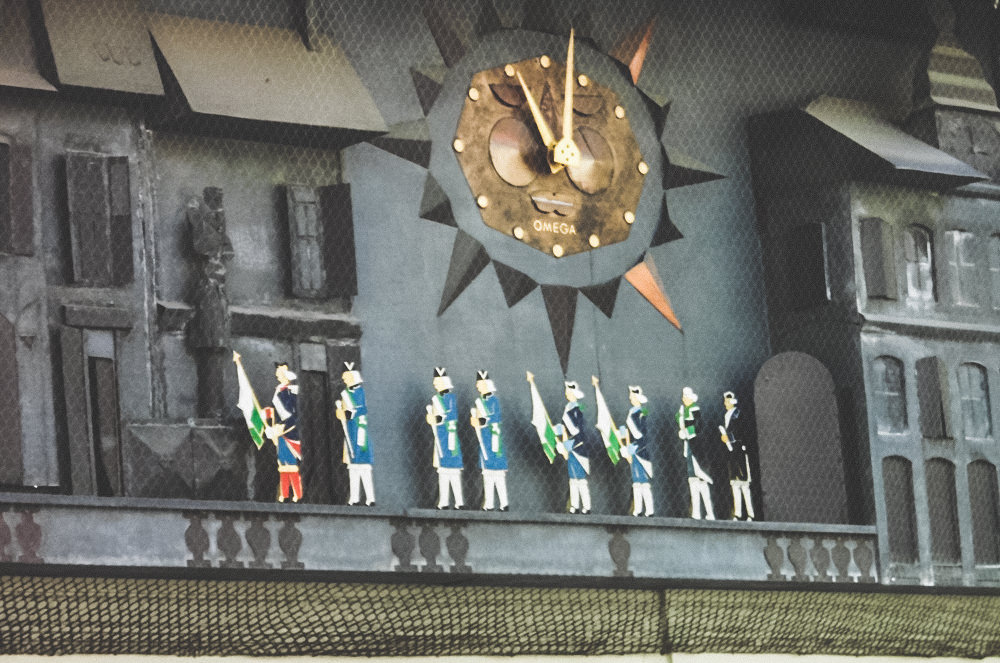 On the other side is another Lausanne curiosity: the talking clock.  A huge clock on the wall of a building and on the hour, a carillon sounds and out walk historic figures and a voice tells stories about the history of Lausanne. A delight for adults and kids alike.

Around the corner, we come to the Church of St. Francois in a square of the same name. On Wednesdays and Saturdays, the square is converted into a fruit and vegetable market where the farmers from the surrounding Vaud canton sell the freshest products.

Chocolates and chic shopping are next on the agenda, both of which are to be found in the adjacent Rue du Bourg.   You’ll find the award winning chocolate concoctions of Blondel and shouldn’t fail to sample their famous truffles and hammer cut chocolates which resemble paving stones. 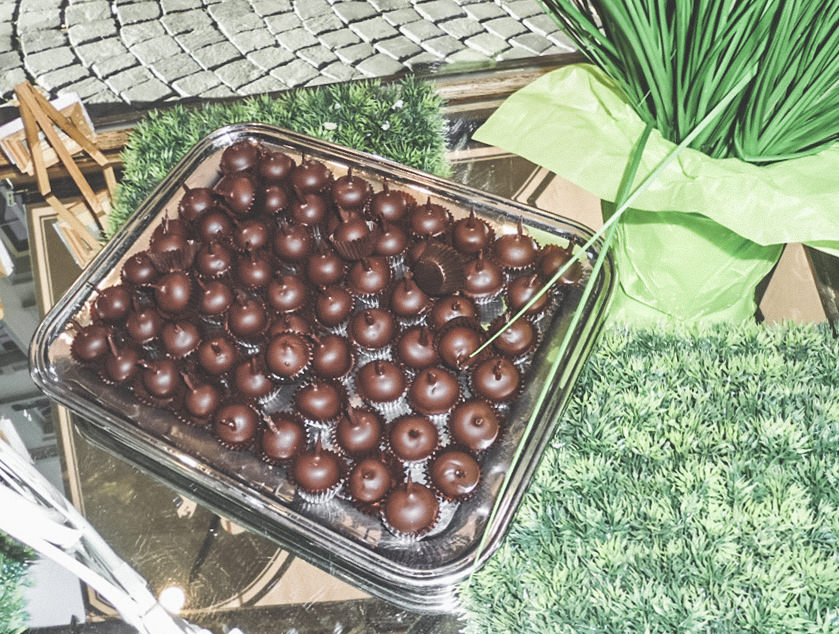 Switzerland and watches are inseparable, so you might want to take a look at the Tourbillon Boutique which carries the latest time pieces from Breguet, Blancpain, and Omega. The budget might not stretch to actually buying one, but looking is free!

Lausanne is probably most famous for her connection to the Olympics. It’s the seat of the International Olympic Committee which was first housed in the lovely villa Mon-Repos before moving to the actual modern building. In addition, the city will host the 2020 Winter Youth Olympics. 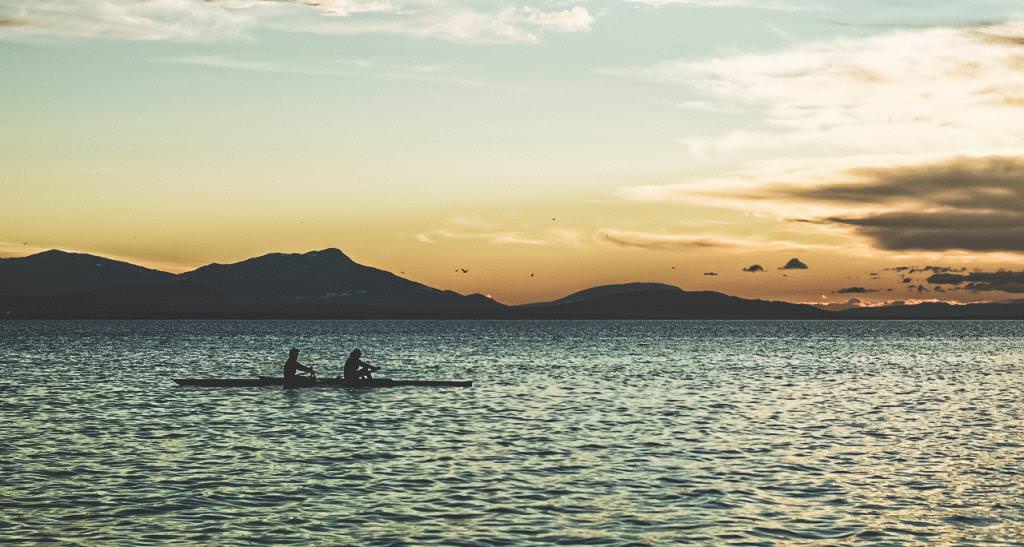 We took the METRO 2 to Ouchy on the shore of the lake to learn more about the Olympics by a visit to the Olympic park and museum. Statues of medal winners adorn the park at the side of the many steps which lead to the museum entrance. It’s a very modern, interactive type of museum with countless screens on three levels, telling the history from Greek times to the revival of the Olympics by Baron de Coubertin with the first games of modern times taking place in Athens in 1896.

Personally, I’m not a great fan of this type of museum. The darkness makes me claustrophobic, but it’s a question of personal taste. I was happy to reach the top and the nice, open TOM café overlooking the lake and mountains. Ouchy has become my favorite place in Lausanne. 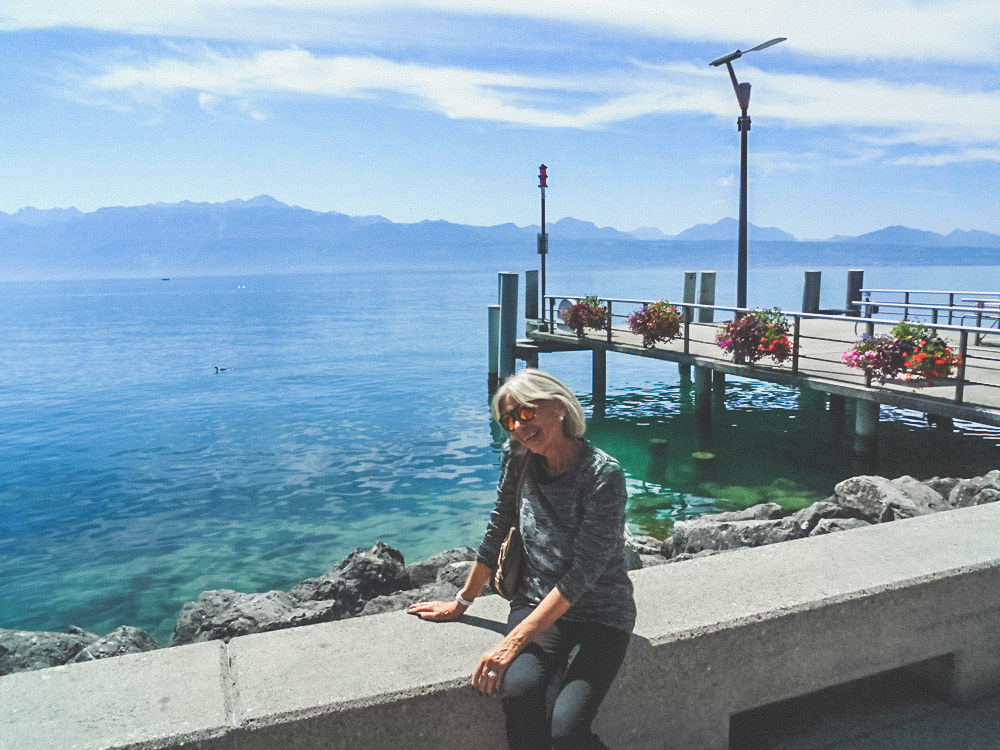 Walk along the lake promenade and admire the legendary Beau Rivage Hotel, the epitome of Belle Époque chic, frequented by celebrities since 1861 without closing for a single day. The 4ha park with flowers, lawns and mature trees features another curiosity: a pet cemetery, with among many others, the grave of the dog of Coco Chanel.

Talking about cemeteries: thanks to my guide I also made my way to Bois de Vaux where you find the graves of Coubertin, Coco Chanel, and many others.

My Highlight of Lausanne: Sunset Cruise 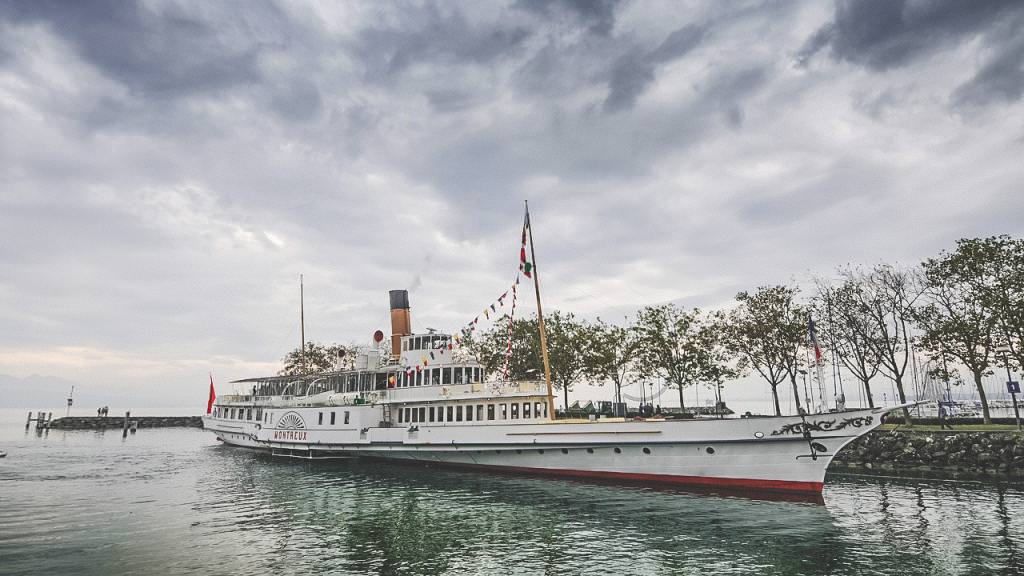 Back to Ouchy though. I love the water and any kind of boat trip I can find. Ferries run from Ouchy to Evian, Monteux, Vevey, Geneva and many other places and are a great way to explore Lausanne like a local. My highlight was a sunset cruise on a refurbished paddle steamer. The cruise starts at 6.30 and lasts for two hours. Following my friend’s insider advice, I didn’t book the sit down dinner at the lowest deck, but went up on top where several bars serve snacks and drinks. Sitting in a deck chair, I enjoyed the view of the historical vineyards on one side and the Jura mountains on the other, as well as the company of my fellow passengers who got very animated as time passed, drinking, chatting to everyone and dancing to disco music whilst the sun started setting.

Being a museum fan and only having had two days, I could only visit one more museum out of the over 20 Lausanne has to offer. Collection de l’Art Brut is an extraordinary private collection of paintings by ‘down and outs’, like prisoners and inmates of asylums. Unique in the world the museum now exhibits 700 works of art on a permanent basis and thousands more which travel the world. 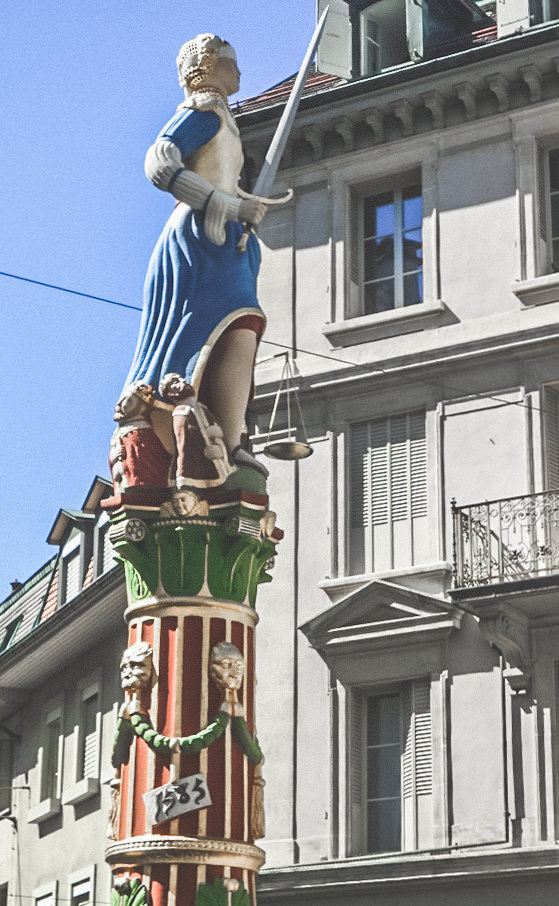 In the summer, you can actually swim in the lake. The water is clean enough and you can hop in wherever you want. Lausanne also features plenty of parks, like Mon-Repos, Monbenon or the Botanical Garden, Denantou Park or Elysee museum and park. There is an enormous amount of things to do and see, catering for every taste if not budget, because let’s face it: Switzerland is not cheap, but Lausanne is worth every Fraenkli and every blister.

How to get to Lausanne: a direct train runs from Geneva airport in about 40 minutes, depending on stops in between. From New York, you can get flights starting at $200 one-way. For best flight deals, check out Skyscanner!

Every hotel in Lausanne, regardless to category, issues its guest with a free transport card, so you can really discover Lausanne like a local. Use your transport card and travel by bus or METRO. They take you everywhere.

For all other information contact the extremely helpful Lausanne tourism office, which invited me on this great trip and showed me Lausanne like a local! An office is to be found right next door to the METRO stop Ouchy-Olympique.

And remember to take a look at our Hotel recommendations for Lausanne!

Discover Lausanne like a Local was written by and photographed by Inka Piesga-Quischotte  for EuropeUpClose.com 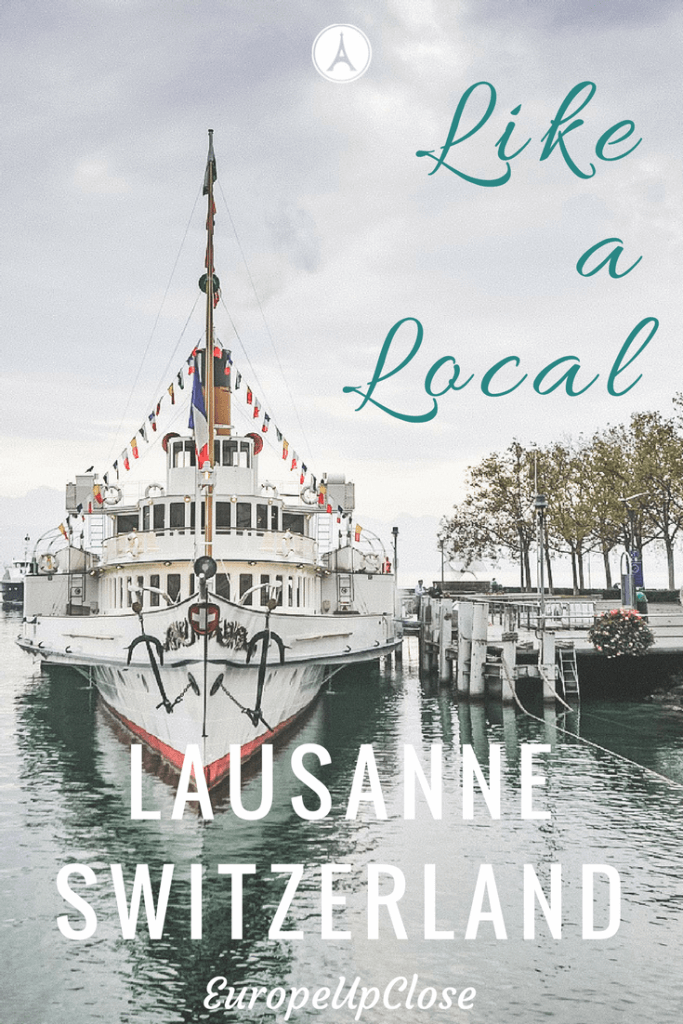 It seems an awesome place for a worth getaway. I want to explore its every nook and corner, thanks for sharing this nice post. A few years back I have been to Switzerland's Swiss National Park for hiking with my friends and it was really an amazing experience. It's a beautiful destination to plan a vacation for.

Wow! Absolutely beautiful! I missed this lovely city the last time I was in Switzerland, and I can't wait to head back so I can check it out! :)

Outstanding post and great Info on Lausanne but I was wondering if you could write a little more on this town? I am planning a trip to Switzerland this summer and I'd be very thankful if you could elaborate a little bit further. Appreciate it!