A triangle of villages in southern Tuscany contain treasures undiscovered by American travelers.  Sorano, Sovana, and Pitigliano nestle 50 miles southeast of Grosseto, close to the border with Lazio, and offer much to visitors above and beyond what you expect in southern Tuscany, i.e., good food, great wine, medieval village charm.

Sorano has all that, including a bandiera arancione (orange flag) from Touring Club Italia – a mark of quality awarded to a select number of small towns in Italy.   Sorano also has a 14th-century castle that is a major example of Renaissance military architecture.  The subterranean walkways and labyrinth passages of Fortezza Orsini are a vibrant testimony to the life of soldiers who guarded the castle and the town 700 years ago.   An excellent guide can explain how the architecture of the fort made it impregnable in times of siege, despite the relative fragility of its construction in tuff (porous volcanic rock). 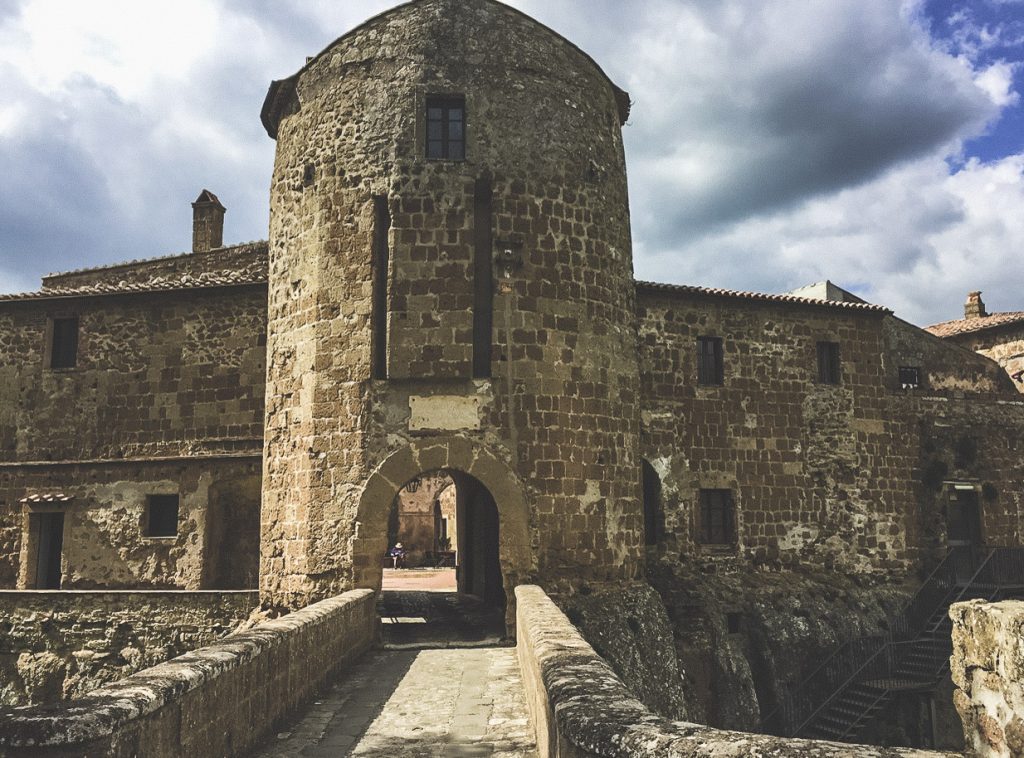 You could spend a few hours wandering above and below ground level, so remember to bring a sweater even if you are visiting during the summer months.  One characteristic of tuff is that it holds heat in the winter and remains cool in the summer. 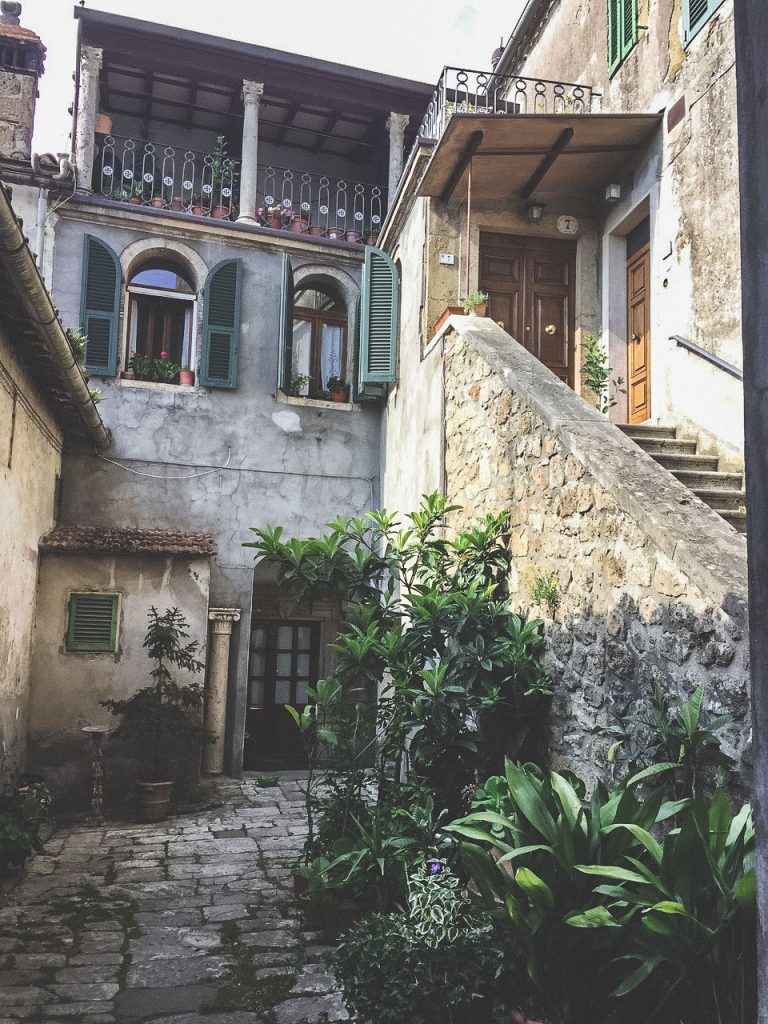 The town’s medieval church is the Church of San Niccolò.  It dates from around 1290 and boasts a wooden cross donated by Cosimo de’ Medici.
The Medici were religious only insofar as it served their political purposes.   So when they perceived that the Jewish bankers of Sorano and Pitigliano – small in numbers but influential in business — would be unwelcome competition for their own banking ambitions, they created ghettos in both towns.  The ghetto in Sorano was mandated in 1619, and traces of this Jewish quarter are still visible.   A kosher olive oil press is no longer in operation, but a tiny synagogue is open and used for special exhibits. 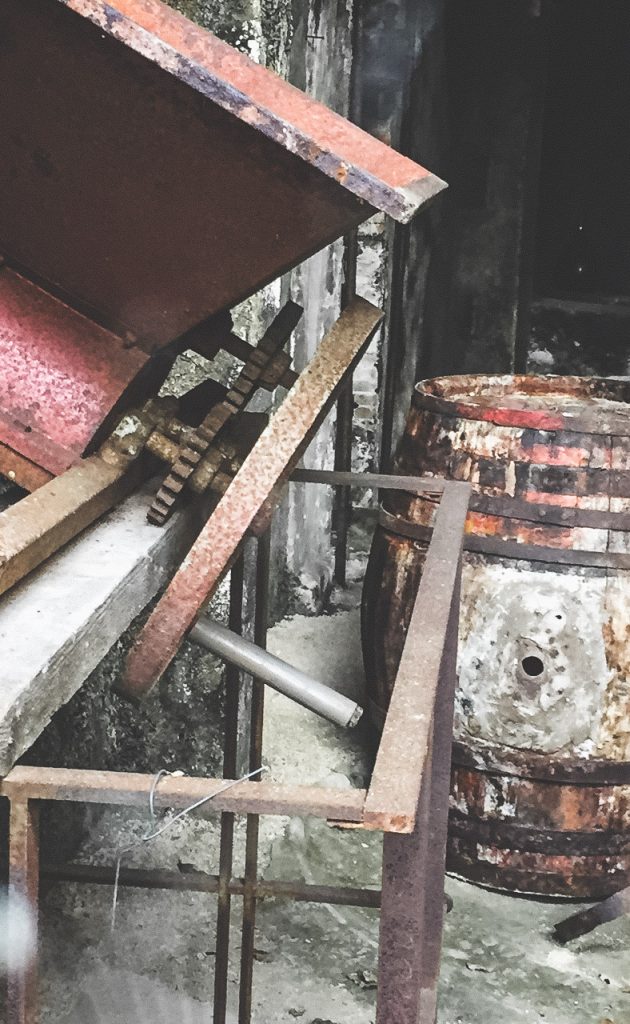 Pitigliano’s ghetto was different, in that Pitigliano became a “sanctuary city”  for Jews in the Middle Ages, first for those fleeing persecution from the Pope in Rome, then for those escaping from harsher conditions in surrounding border villages.  Pitigliano became known as “little Jerusalem,”  thanks to tolerant local leaders and an ongoing spirit of cooperation between religious groups.   In 1799 a group of Christians defended the Jewish ghetto from threats by a military group, an event so extraordinary that this feat was remembered in an annual ceremony for more than 200 years.   During part of this period, Jews represented 12% of the town’s population, an extraordinarily high percentage for southern Tuscany. 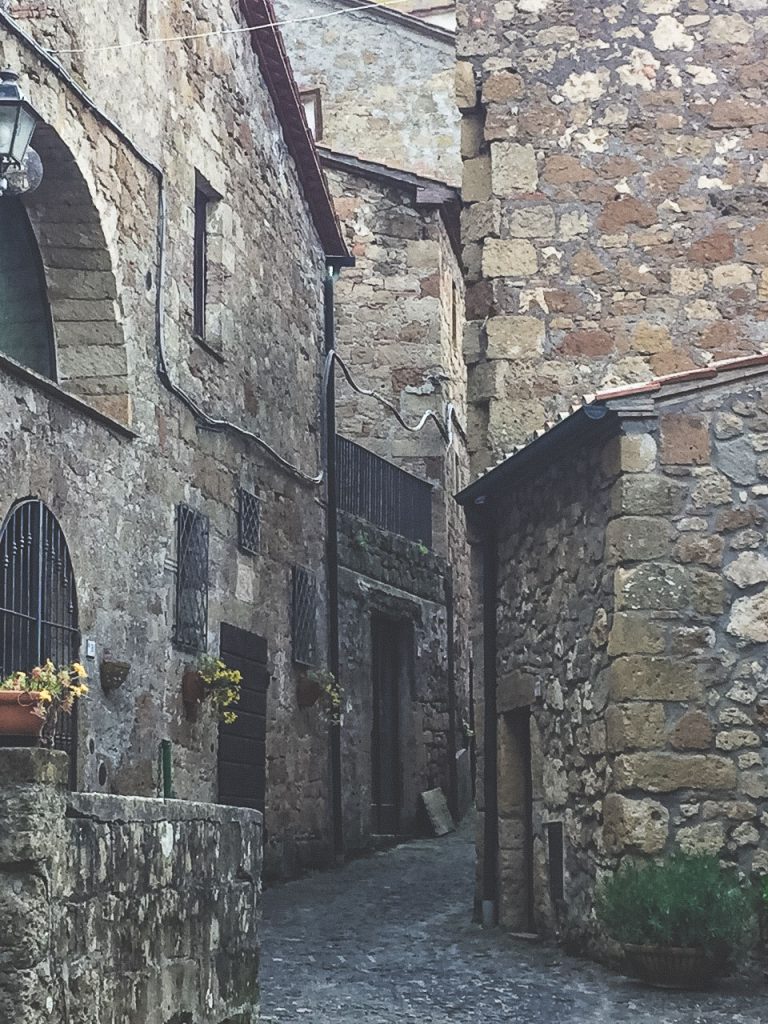 That number was reduced dramatically during World War II, though numbers of Jews were saved by locals who hid them or helped them escape.  Today the Jewish heritage of Pitigliano can be seen in its synagogue, kosher bakery and butchery, Jewish cemetery, museum, and ritual bath.  The local wine cooperative still makes kosher wine in honor of the town’s history.

Sovana’s history is interlocked with that of Sorano, as an Etruscan settlement, a Roman municipality, and a feudal prize contested by rival families.  Think of the Orsini and the Aldobrandeschi as the Montagues and the Capulets of this part of Italy . . . except that the Catholic Church also had an interest in accumulating power.  So families jostled with the Church for dominance, and families that produced popes had a decided advantage.  Such was the case with Pope Gregory VII, who was born in Sovana (his house is marked accordingly).   That was also the case with the Medici of Florence, who produced three popes between 1513 and 1605, and kept close contact with popes who were not family.  Cosimo I de’ Medici was named Grand Duchy of Tuscany in 1569 by Pope Pius V and annexed Sovana shortly after that. 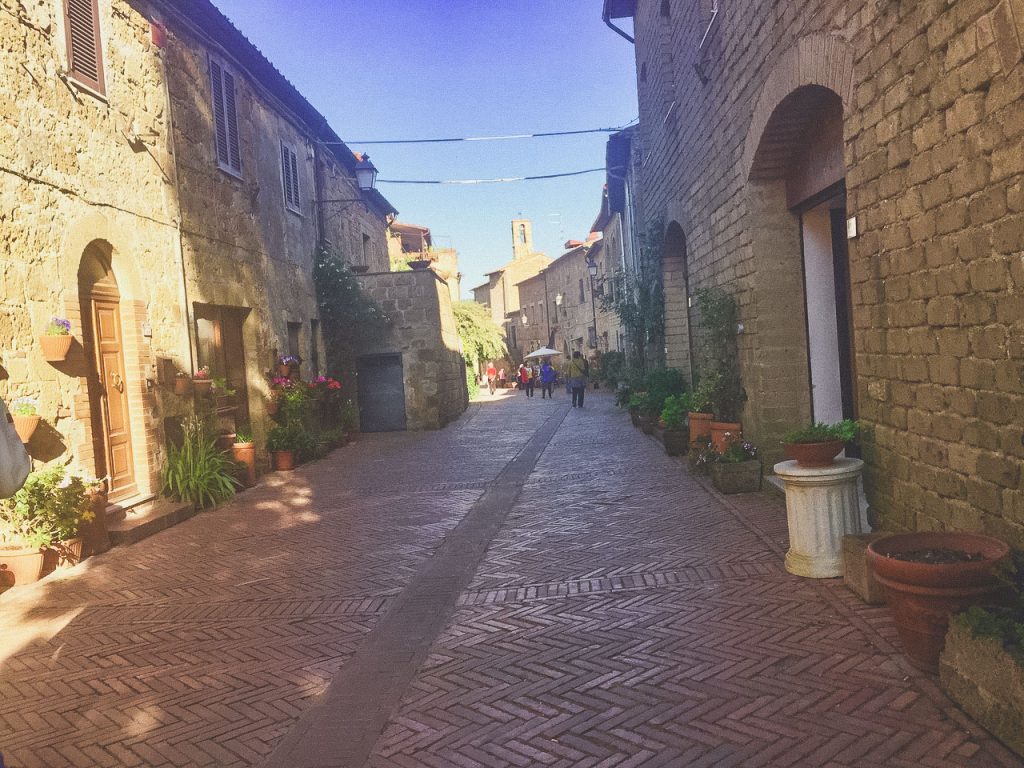 Today Sovana’s permanent population of about 100 is swelled by visitors who are attracted to one of Italy’s officially-recognized “100 prettiest villages”.    Compact size (three streets) and architectural integrity are its main draws, but the Duomo is also an attraction.   The 10th-century Roman gothic style is both rich and austere for 364 days a year.  On June 21, it is also mysterious.   The first rays of sun on the morning of the summer solstice beam through the window behind the nave and illuminate the interior of the church.   This cannot happen in churches built by dictates from the Vatican, so someone broke the rules. 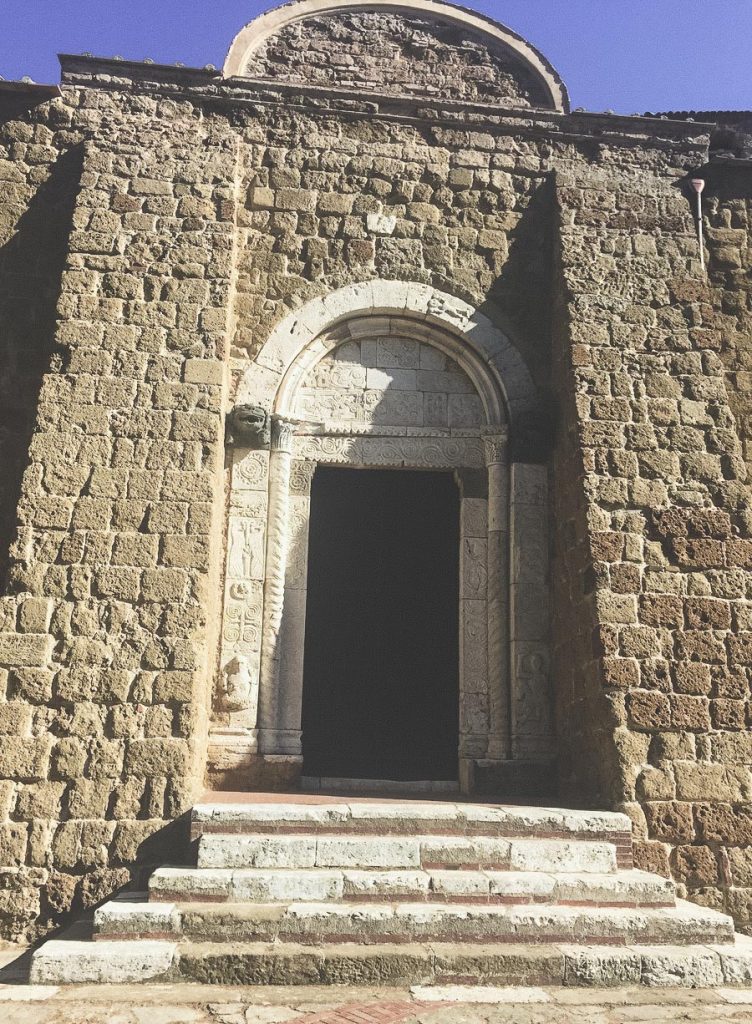 Art and Beauty in Sovana

The doors of the Duomo are likewise worthy of note.   They are made of travertine marble and contain both symbols of Christianity and Etruscan symbols, such as those seen on the tombs in the adjoining Archeological Park. The artist was apparently hedging his bets.

Many of Sovana’s former homes have been turned into artists’ ateliers.  Instead of postcards and t-shirts, you will find a weaver who uses an old-fashioned loom, a jeweler who fashions unique gold necklaces and bracelets from Etruscan designs, a sculptor who works with wood from local olive trees, and a designer who creates objects from the ubiquitous tuff rock. Perfect to find an authentic souvenir to remind you of your trip to southern Tuscany. 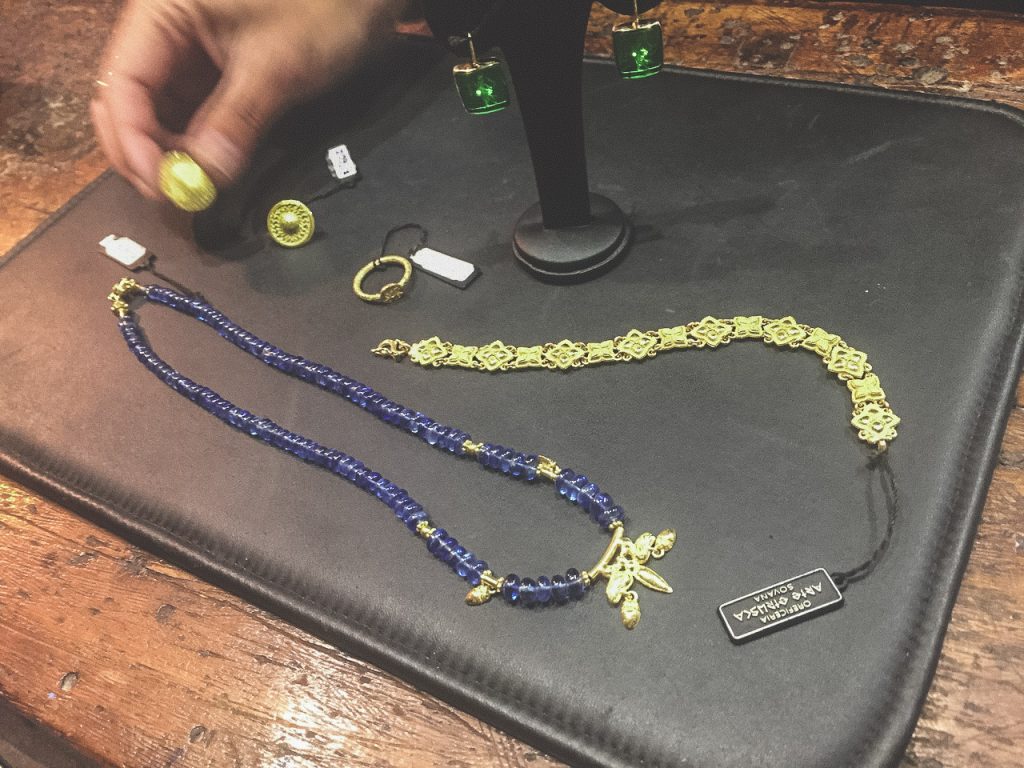 Every year in June the village hosts Sovana Medievale, a tournament re-evoking the Middle Ages.  One difference from other medieval fairs in Tuscany is that visitors can rent themed costumes during the two-day celebration, and become part of the pageantry.

For more information about these towns and their attractions, write to info@leterredeltufo.com and visit their website: www.terredeltufo.com. Request an English-speaking guide in advance (such as Irene Belli) and you will understand southern Tuscany’s history so much better.

For information specifically about the Jewish history of Pitigliano, write to lapiccolagerusalemme@libero.it.

Claudia Flisi wrote and photographed the article about the Enchantments in the “Etruscan triangle” of Southern Tuscany for EuropeUpClose.com. 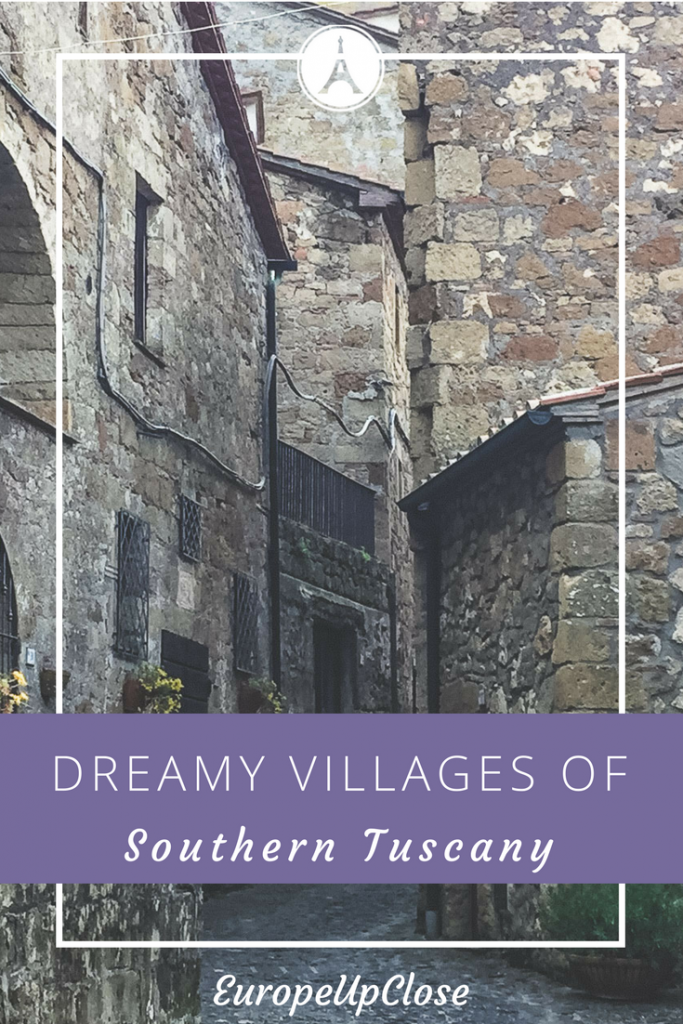 Wow, Wonderful Post. . . Traveling is really a good thing in life,infact it's everything