The Rougemont Gardens in Exeter, Devon come alive each summer with open air productions of Shakespeare.

Whilst outdoor theatre is a common phenomenon in the UK during the summer (made all the more unforgettable by the somewhat unpredictable weather), what sets the Exeter Shakespeare in the Gardens performances apart is the fact that they occur for several weeks at a time, rather than one-off dates. 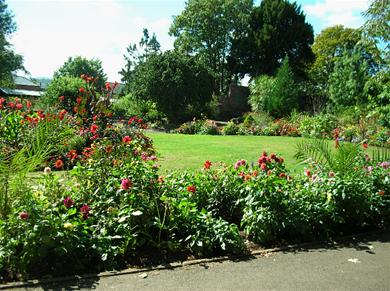 The professional event (this year, Romeo and Juliet) is put on by Exeter’s Northcott Theatre, and this year is in conjunction with Ludlow Festival Society. And they really go to town in making the event memorable.

A group of four of us have been regularly attending Shakespeare in the Gardens each year for a while now (we are beginning to lose track, but it must be eight or nine years), some travelling a considerable distance and making the most of a city break for the weekend. In fact, it’s become quite a tradition to have an ‘annual Shakespeare weekend’ in July or August each year and wouldn’t seem quite the same without it.

In the past, the Northcott Theatre has built elaborate tiered seating, much of it undercover, so it’s meant that we’ve not had to worry too much about what the unpredictable weather would do.

This year, in light of the recession, they’ve had a change of tack and re-organised things. Rather than being high above the stage on tiered seating (as you would in an auditorium), the majority of seats are on one level, with a few rows towards the back raised up. More importantly, there’s no shelter and everyone is out in the hands of the elements.

It’s probably a love it or hate it situation, but I personally think it worked out fine (the others were not so convinced). The seating is more intimate, curving around the elongated areas of the stage, and it brings parts of the action out into the crowd. The downside is, of course, that if it rains you’re well and truly exposed to it. On the day we were there, we were blessed with sunshine and heavy showers – lovely and hot when the sun was out, but drenching when it rained.

However, if you don’t mind the prospect of getting wet, or are happy to huddle under a plastic cape for a few hours, it’s well worth going to see. The acting was as good as ever and the garden setting, with the wind rustling through the trees and the occasional blackbird hopping over the stage, all added to the atmosphere of the play.

There are plenty of hotels on offer in Exeter to suit a multitude of budgets. Over the years, we’ve tried several out, but our firm favourite is the Mercure Southgate Hotel. It’s in a good location – central, but not too central to be overly noisy – and a short walk away from Exeter Cathedral, the High Street and Rougemont Gardens. The four star hotel has 154 en suite rooms, a swimming pool and fitness centre, and can be guaranteed to serve an excellent breakfast.

Over the years, it has undergone various décor transformations, with the latest being a rather dark colour scheme in the bar and restaurant, and in the last year they’ve replaced the large floral display in the entrance lobby with a stunning turquoise triangular seat.

In the past, parking has always been free, but this has now changed to a pay lot – not great, and it could add up if you’re there for long – but it is a convenient city centre parking place.

If you’re looking to stay at The Southgate, then it’s well worth shopping around for a good price, as there are usually good offers to be found, especially if you book in advance.

i'm trying to find out the dates for the next performance in Exeter. You give all the information except for dates. I'll the website for the Northcott.

LOVELY! i adore shakespeare in the park - glad you went. i'll have to look this up if we're headed to the UK next summer!