Some of the world’s most impressive ancient burial chambers, or dolmens, stand in the green fields and copses of Wales. On a recent trip, my husband John and I tracked down several of these prehistoric sites, and each time I felt the eery sense of an ancient past brought into the present. The dolmens, which date from Neolithic times, have been thoroughly investigated and are protected as national monuments, and the better known sites are visited by thousands of tourists. Yet more than once we were the only human presences there, gazing at those immense standing stones, pondering how and why they were built and what stories they could tell.

Pentre Ifan  is an example. Constructed about 6,000 years ago, it stands aloof on a ridge in Pembrokeshire in southwestern Wales, overlooking the Nevern Valley. We took a long, winding country ride up the hillside from to the entrance gate, then walked a path into the broad field. There it was, immense in silent, solitary mystery. 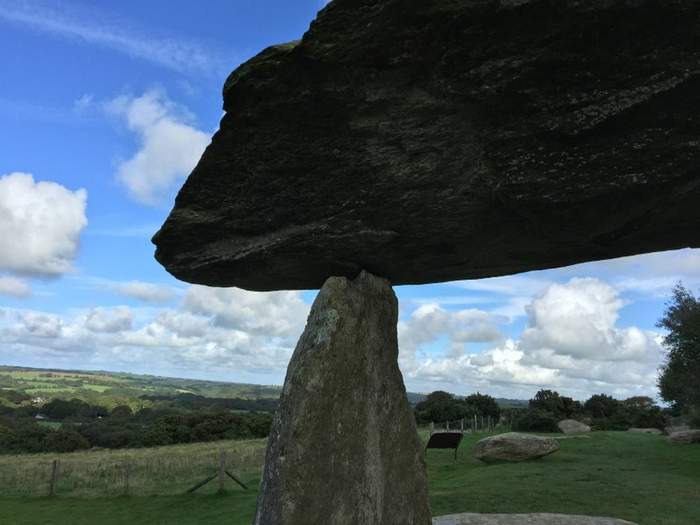 The capstone of Pentre Ifan weighs about 17 tons

The structure has seven main stones of local igneous rock, with the largest the 16-foot-long capstone resting on the tips of three other stones. The capstone weighs about 17 tons. Pentre Ifan, which apparently means “Ivan’s Village” (don’t ask me why; this question calls for a Welsh historian), is assumed to have been a communal burial place, re-used many times. However…no bones were found. Perhaps they were later moved, or this never was a tomb and had another purpose altogether. A shrine of worship, a demonstration of status or craftsmanship, a sign of reverence for the site? There are several theories. And there are more puzzling features, such as a line of holes and a pit with evidence of fires. 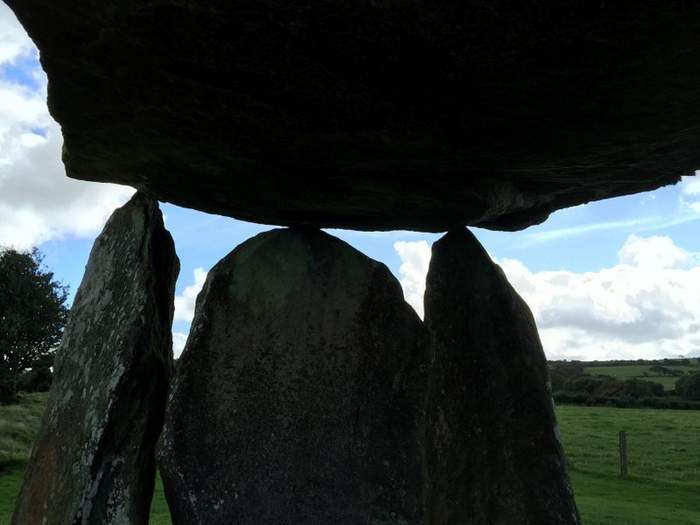 Pentre Ifan is one of the best-known dolmens, or burial chambers, in Wales

It’s very likely the capstone was not brought in, which would have been a huge undertaking, but was already on the spot, a glacial erratic that the builders levered up, using poles, ropes and lots of muscle labor. They could have piled boulders to hold it up and then moved the supporting stones into place. That alone would have taken an incredible amount of work, time and dedication. If I were to hazard a slightly educated guess, I’d say it was a burial chamber constructed by people who cared deeply for their ancestors. Pentre Ifan has similarities to other dolmens, and it would have to be something that important to warrant such effort. 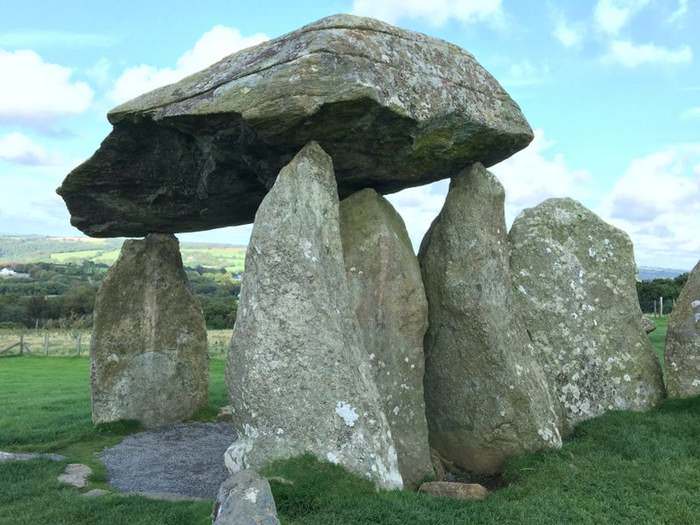 It’s said that fairies, little people wearing red caps, have been seen at Pentre Ifan. Sadly, I saw no fairies – but they may have seen me.

The monument is close to another interesting site, not a dolmen but well worth a visit. Castell Henlyss, an Iron Age fort, is a faithful reconstruction of the village that stood here above a stream more than 2000 years ago. 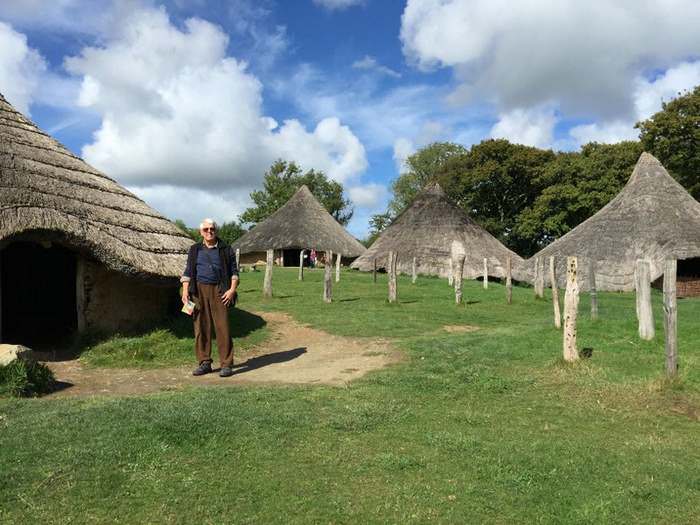 Thatch-roofed houses at Castell Henlyss, a replica of an Iron Age village in Wales

It’s in the heart of Pembrokeshire Coast National Park, on 30 acres of woodland and meadows. In large, thatch-roofed round houses, interpreters in costume demonstrate life activities as they once were, including pottery-making, cooking and weaving. While we watched, a guide showed a group of school children the skill it took to weave willow fences that held livestock. There are interpretive panels along the self-guided walk. Castell Henllys has a visitor center, café and gift shop. 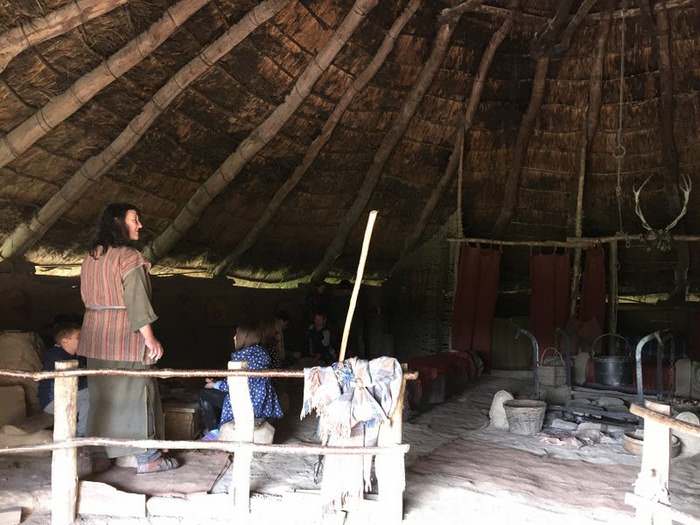 A cooking demonstration in a round house at Castell Henlyss

One of the oldest dolmens in Wales, possibly the oldest stone structure in the British Isles, is Dyffryn Ardudwy . It’s located off A496, near Barmouth and the charming village of Dyffryn Ardudwy  on the western coast. This site is on a hilltop field, though not as removed as Pentre Ifan nor with such a dramatic view. 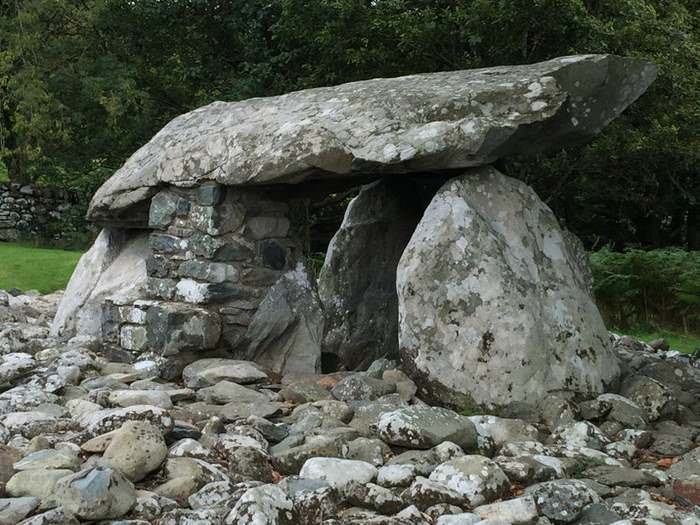 To get there, we parked at a nearby school ground and walked a woodsy, fern-filled path. This monument, comprising two separate chambers set on a rectangle of stones, dates from around 3500 BCE. Excavations have revealed both Neolithic and Bronze Age pottery, which suggests that the chambers were used for centuries. Other finds were a broken pendant and two polished stone plaques. Dyffryn Ardudwy is similar to dolmenss in Ireland and western Europe, so it’s quite possible—more than likely, I’d say, given its proximity to the sea—that the people here had connections to others with the same burial traditions or beliefs. 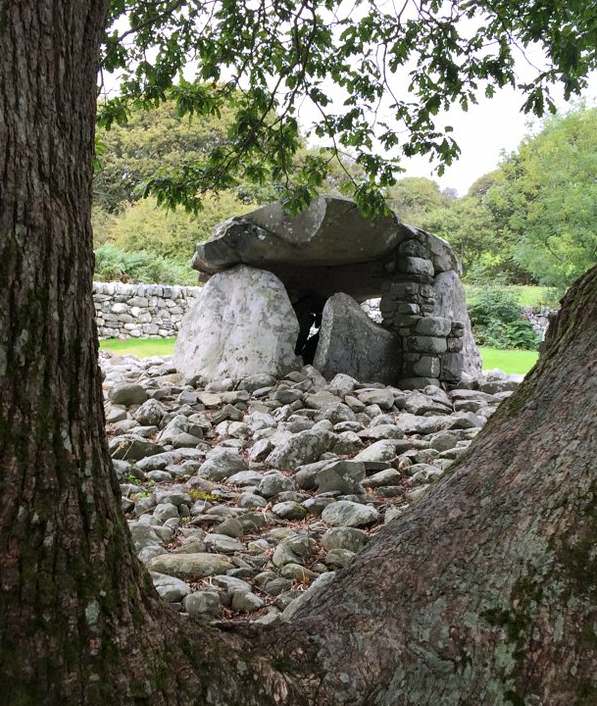 Bryn Celli Ddu, on the island of Anglesey in northwestern Wales, is said to be one of the finest burial chambers in Wales. It has a 28-foot-long passageway, part of it unroofed, running between vertical slabes of stone. The passage is oriented toward the sunrise at summer solstice, like a few other sites such as Newgrange, in Ireland. Brynn Celli Ddu may have been designed to indicate the changing seasons of the solar year. Inside the chamber is a 6.6-foot stone column, smooth and rounded, rare to find in a dolmen. Beyond the back wall there’s a replica of the Pattern Stone, which was found buried under the mound, with carved designs in snake-like shapes winding around the stone. The original standing stone is in the National Museum of Wales in Cardiff.

Another notable dolmen is Tan y Muriau, two burial chambers on the Llyn Peninsula in north Wales. The tomb, constructed around 5500 years ago, was built like others in the area, with an immense slab as a portal. It’s impressive today but would have been far more so when it was a complete structure and in use for millennia. In a world filled with beliefs in gods and spirits who held sway over the cosmos and all the vagaries of life, it may have been a place of ancestral worship by people hoping to be protected by those who’d gone before.

Other dolmens include Bron y Foel Isaf, Cors y Gedol, and Gwern Einion, located near Dyffryn Ardudwy, off A496 on Wales’ west coast. Some are badly damaged, but all inspire the imagination. They convey a haunting sense of times and traditions long past, with their mute evidence still standing.

Don't want to upset you but while mushroom hunting in the Pemberton area of B.C. Canada my son took us up into the mountains with which he was very familiar. I walked out on an open area that looked up the valley to the west and was quite excited to find a large dolmen. Yes a Dolmen. a gigantic flat slab of granite supported by the pointed slabs of granite over or about eight fight tall. I am six feet tall and know what eight feet is.. There is no way that men could have raised that giant flat piece of granite or place the three giant slabs that held it up and to me no reason to. I told my son Garth that I was going to take pictures of it and he said in a rather disinterested tone or voice, "they won't turn out, the old people don't like pictures of this rock". I said what old people and all he would say was,"agh the old people, they think this is a power place". I took several pictures and none turned out. I am not superstitious I am Bloody Welsh, name of Leyshon or Lleision or what they spelled it as over the years. My family has spent 600 years in the Aber Avon area and has been quite prominent. My son is also very Welsh, as I have made sure of that even though we are what the Irish would call Wild Geese. My son lived for several years with the natives in this area and even became a healer so he has picked up much from the elders. I have tried to convince he to go back with me to get GST reading and pictures but he is more than bit reluctant. Too much Welsh in him maybe. But I promise you and myself this, I will go back and take readings and pictures before I die. I know what I saw and I know what it was. Do not be afraid to stay in touch.