Vauvenargues is a small French village strung out like washing on a line along the valley lying parallel to the north side of Mont Ste-Victoire. Its “main road” has front doors of stone houses opening right onto the street; the café tables along its length 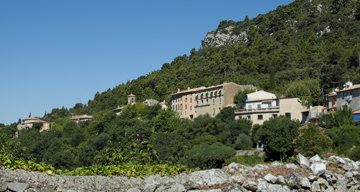 Across the valley from the village is a fairytale chateau haloed by the sun and perched on a rock among the trees of Mont-Ste-Victoire’s north slope. It’s built on the remains of a Roman settlement like so many castles and forts in Provence. The faded yellow walls inside its encircling rampart are cheered by red shuttered windows.

In 1958 Pablo Picasso fell in love with and bought Chateau de Vauvenargues and the land behind it that reaches to La Croix de Provence. He said with satisfaction, “Cézanne painted these hills and now they are mine.” The chateau was his favourite home until 1961 when he returned to the French Riviera for the company of friends and regular medical care. After that he rarely visited Vauvenargues and it suffered from his absence. Picasso’s step-daughter, Catherine Hutin, owns the 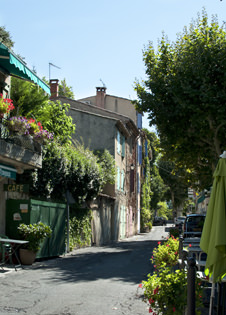 chateau today, after she inherited it from her mother Jacqueline who took her own life in 1986. Despite a desire, neither woman opened the chateau to the public until the summer of 2009.

I am eager to see Picasso’s chateau but I’m unsure if tours are available in 2011. With hope, I approach its open wrought iron gate. The woman tucked behind it says, “Yes, it’s open but you need a reservation to do the tour.”

I don’t have one. After some sweet talking and a couple of phone calls, I was “in” for both the guided tour and the exhibition of Picasso’s little-known etchings.

“No photography outside or inside,” was the greeter’s parting shot.

I raise my eyebrows.

“Put your camera away, please.”

I comply, afraid if I leave it around my neck she’ll take my ticket back. 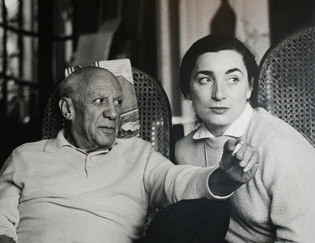 The residents of Vauvenargues blocked a plan to open the chateau to the public after Picasso’s death in 1973 as they feared a massive pilgrimage of curious visitors would disrupt their lifestyle. Today at the height of the tourist season, I join surprisingly few tour participants none of whom speak English and learn why – in addition to no photography, there is no translation for non-French-speaking art aficionados; numbers are restricted; and there is no English guide book to this historic site. When I ask for a written copy of the English version of the guide’s French commentary, I’m told it’s not allowed. Still, I take the tour and struggle to understand the guide’s rapid-fire French.

The medieval chateau dates back to 1297 and passed through the hands of the counts of Provence, the archbishops of Aix, and others who added their own stamp to it in the form of ramparts, towers, an elegant entrance at the west end, and a eastern terrace 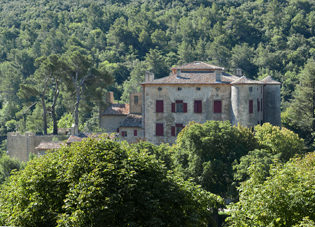 that Picasso filled with his sculptures. When he moved in, he left many of the main rooms as he found them, including a formal, paneled dining room with a small chapel at one end and a library.

Inside, the chateau is cool and smells of damp stone. Most of it is austere and not as big as I expected; nonetheless Picasso, his second wife Jacqueline, and their Afghan hounds must have rattled around in it. The family quarters on the sunny side are plain, stark even. They are sparsely furnished with mostly bare walls; with effort I imagine the Matisses that he hung but no longer grace the rooms. The noonday light reveals the ravages of time – crumbling plaster and peeling paint. Some of Picasso’s sculptures remain in the dining room and entrance hall, but none of his paintings. Although he did three of the village, he never painted his beautiful home or Mont Ste-Victoire – Picasso used to say that he wanted to leave the mountain to the genius of Cézanne. Throughout other rooms, dozens of his etchings are exhibited this year. A few I like, especially those of bullfights and circuses, and many I don’t, but I appreciate his remarkable gift all the same.

I find little of Picasso’s spirit in the chateau. An exception was his bathroom’s high-spirited mural of a forest faun playing a flute that he painted for his wife and a short movie taken when he was in residence.

Picasso was known as a superstitious man who was difficult to live with, often treating women poorly, but one who could also ooze charm when it suited him. Perhaps this is why Jacqueline revered him and never recovered after he died.

It is the last room on the tour that speaks volumes to me about the man. This is his white-washed studio, originally le grand salon, which he chose as having the best natural light. Here he worked furiously under the ornately carved crown moldings and beside a Baroque-style mantelpiece that soars twenty feet to the ceiling. Untouched since 1961, the studio is filled with Picasso’s over-sized easels, huge pots of paints on the refectory table he used as a palette, and his brushes. Even his paint splatters still spot the tiled floor.

As the tour ends, I stop at entrance of the chateau on an elegant stone staircase gazing down at a typical Picasso statue atop a grassy mound. It is La Dame à l’offrande, sculpted in 1933. To me it’s awkward and ugly, however, it meant a lot to Picasso. His body is interred beneath it. Somehow Picasso’s wife had persuaded the authorities in 1973 to allow his burial on private land, but she is better known for refusing several family members and old friends admittance to the funeral. (Press report, April 23, 1973. Jacqueline decorated his grave with the bronze statue and was buried beside him thirteen years later.

I pass through the archway in the ramparts on my return to the village. I’m a trifle disappointed with the visit to Picasso’s Chateau de Vauvenargues. Foolishly I had hoped for more – the opportunity to take photographs, an English-speaking guide, and a beautiful chateau in better condition. However, I’m also thrilled I had walked in the same footsteps as the greatest legend in modern art.

I squint in the noonday sun that has bleached the apricot walls of the village to pale ochre and I swelter trying to translate the French guide book while I have a bistro lunch. Finding the information office closed until 3:30 p.m., I decide to leave Vauvenargues for home. I eagerly anticipate this evening’s velvety air in which I can sip some wine and savour the changing, golden light on Picasso and Cézanne’s Mont Ste-Victoire with considerably more insight than I did yesterday.

Written by and photos by Julie H. Ferguson for EuropeUpClose.com

@Si: Thx for the exposure - please send me the link to your site and my article.

Hi Julie, A very interesting read. Sounds like a place I would like to drop by sometime.

I've added a link to The Travel Bloggers Guide To The World i'm developing. I hope you don't mind.

Thanks, Henry! It was a great day for me.