“Let me tell you about the first time I visited Knossos,” my friend Jack says. 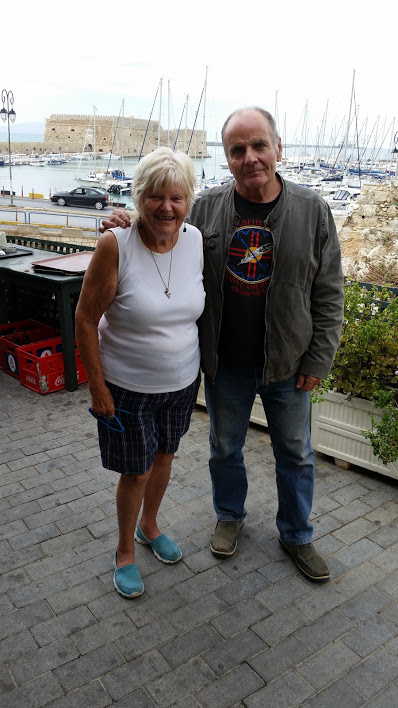 We are sitting at a fish taverna by the famous Venetian Harbor of Iraklion, Crete. My friend, Dr. Jack Dempsey, is an expert on the Minoan culture and has written several books and academic papers on the subject. Jack, who for many years lectured at universities in the States, recently moved to Crete. This visit to Iraklion is our first in-person meeting.

“I was in my twenties then, and I sneaked into the site at night.”

“Really? Were there ghosts?” I ask.

My Interest in the Minoan Culture

At the time I was working on my novel Shadow of the Lion. It began a long online friendship and writer/mentorship.

Now, sitting by the harbor in Iraklion, as we sip wine we discuss our interests in the Minoan culture and I tell him about my visit, one he’s made many times.

I had come to Iraklion to make my third visit to the Minoan Knossos palace site. The day before I had taken the Hop-on-Hop off the bus from the Venetian Harbor in Iraklion. It was a rainy morning but fortunately, by the time the bus pulled into the palace site’s parking lot, the rain had stopped and the skies cleared. 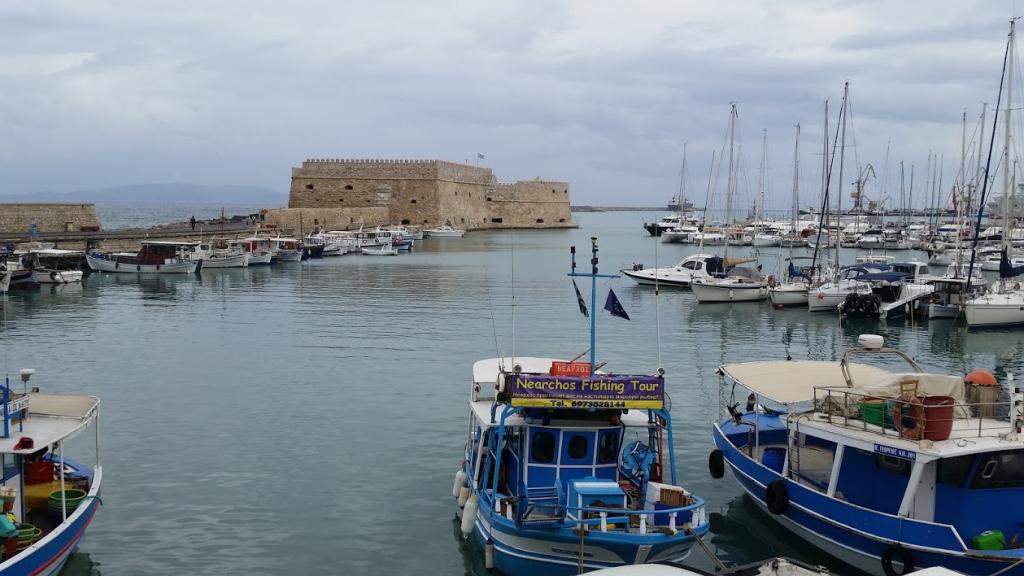 The ancient palace of the Minoans is five kilometers southeast of Iraklion, nestled among gently rolling hills in the valley of the river Kairatos. In Minoan times the surrounding hills were covered with oak and cypress trees now replaced by vineyards and olive groves. The site has a serene quality, a peacefulness that must have influenced the inhabitants of long ago. 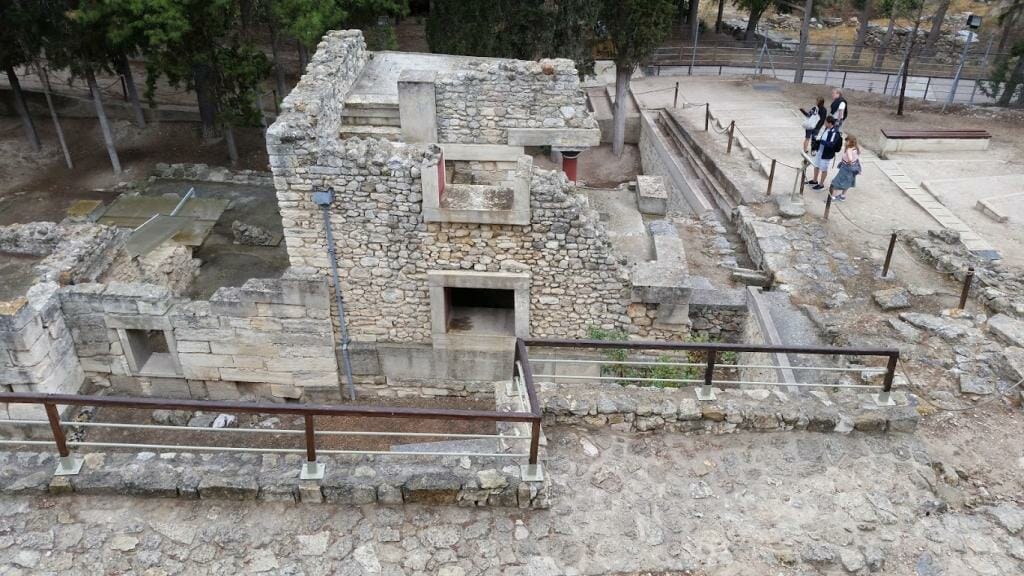 The Center of the Minoan Culture

Knossos in Crete was settled as early as the Neolithic period, and later became the seat of the legendary King Minos. It was once the main center of power in Crete. Built in the early Minoan period, the palace was a place of ceremonial and political events and the center of the Minoan culture. 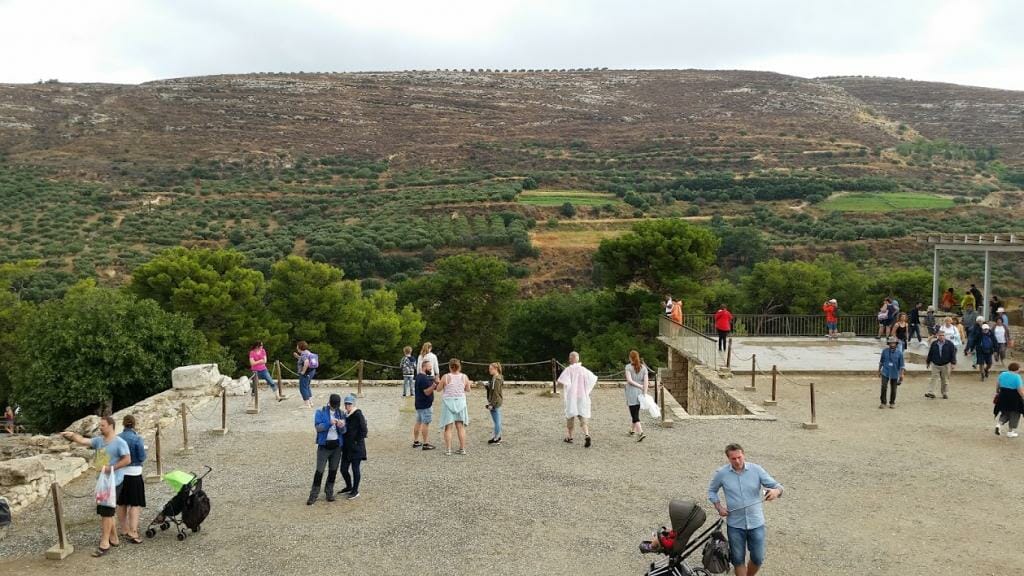 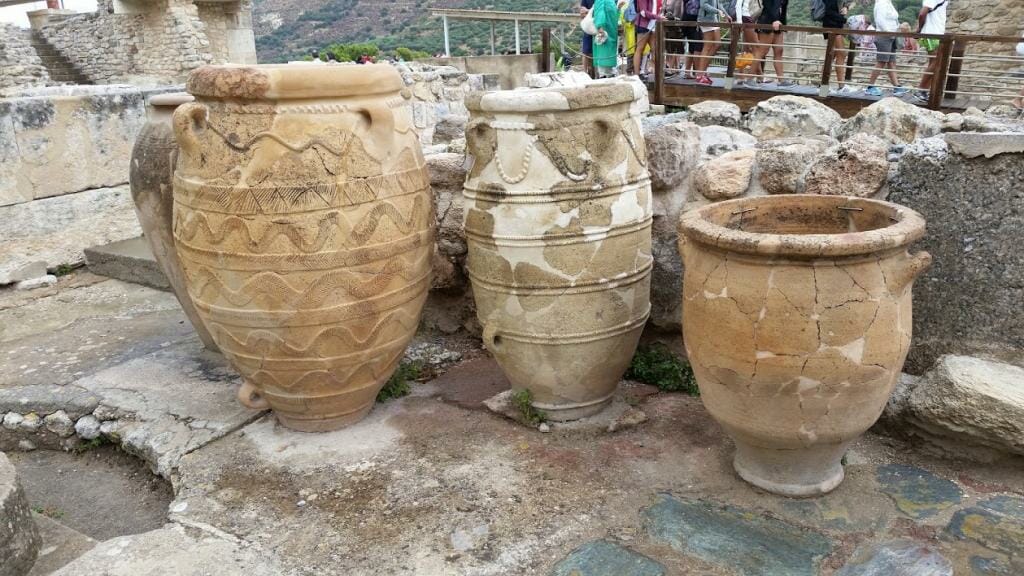 I entered the site from the south-west corner as visitors did in ancient times, arriving at the West Porch. This is a large square portico that opens onto an adjoining room is known as the “Porter’s Lodge” or “guardroom” and through to the Corridor of Processions where fragments of wall paintings showing the professionals. 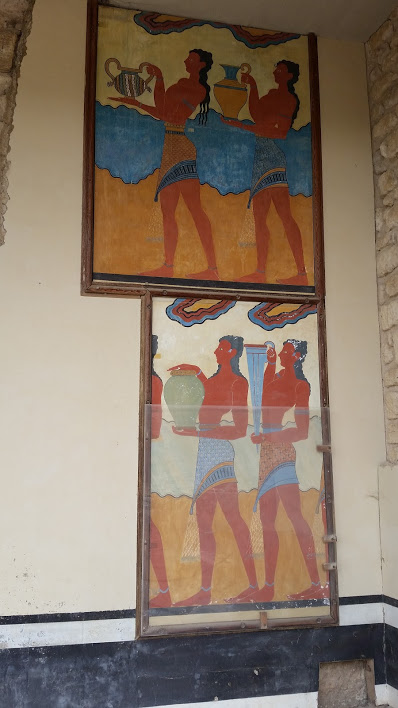 My first visit to Knossos in Crete was in the early 80’s, when I was reading Mary Renault’s book The Bull from the Sea about the Greek prince, Theseus who was held captive in the labyrinth. According to the myth, King Minos had a very large maze constructed in which to retain his son, the Minotaur – who was half man/half bull. The architect, Daedalus, also constructed a dancing floor for the princess Ariadne.

These stories come to mind as I wandered the palace grounds.  Throughout the area, I saw the fabled double axe (labrys) synonymous with the labyrinth of legend. The sign of the double axe was used as a kind of ‘good luck’ mark throughout the Mycenean world denoting that in its presence the person would not be killed. The stone-carved bull’s horns that mark the entrances to sacred spaces in the palace are also a familiar object in Knossos.

Bull Leaping- My Favourite of the Minoan Culture

One of the most famous Minoan frescoes is that of the bull-leapers who grasp the bull by the horns and skillfully leap over it’s back. Bull-leaping was a favored sport of the Minoans’ culture and every year nine young women and men of Athens were chosen by lottery and taken to Knossos in Crete to participate in this sport. In the myth, the Greek prince, Theseus, is forced to fight the Minotaur. Before he entered the labyrinth, Ariadne gave him a ball of thread which he unwound as he went into the maze so that he could find his way back. After he killed the Minotaur, Theseus and Ariadne fled from Crete to escape her angry father. 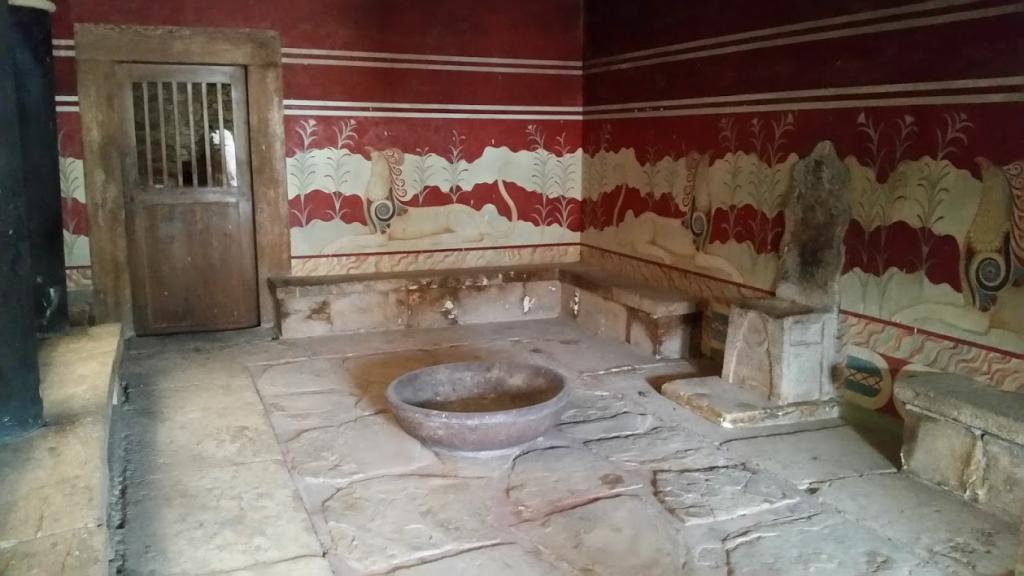 I followed the pathways through the site, from the walls of the palace into the various rooms where some of the wall paintings are still intact.  Most of the treasures and murals found here are now in the Archaeological Museum of Iraklion, but you can still get the essence of the palace’s former magnificence.  One room of particular interest is the throne room where portions of the stone throne are still preserved. Its low ceilings and lack of windows made it seem oppressive and I got a sense of ‘mystery’ when I entered there. I felt a certain eeriness and recall the suggestions that it may have been an area used for religious cult practices which would include the appearance of a goddess/princess who sat on the throne. 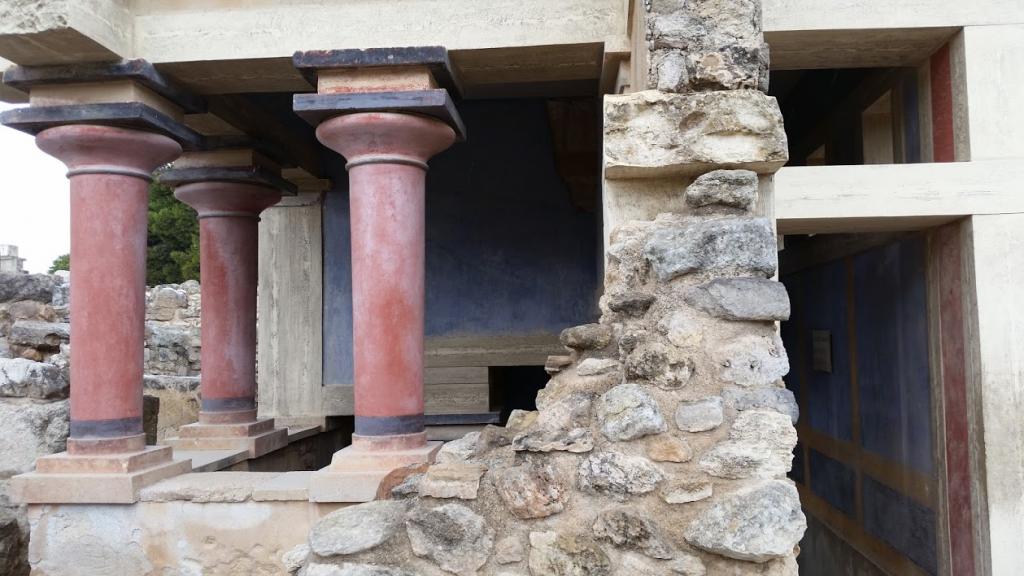 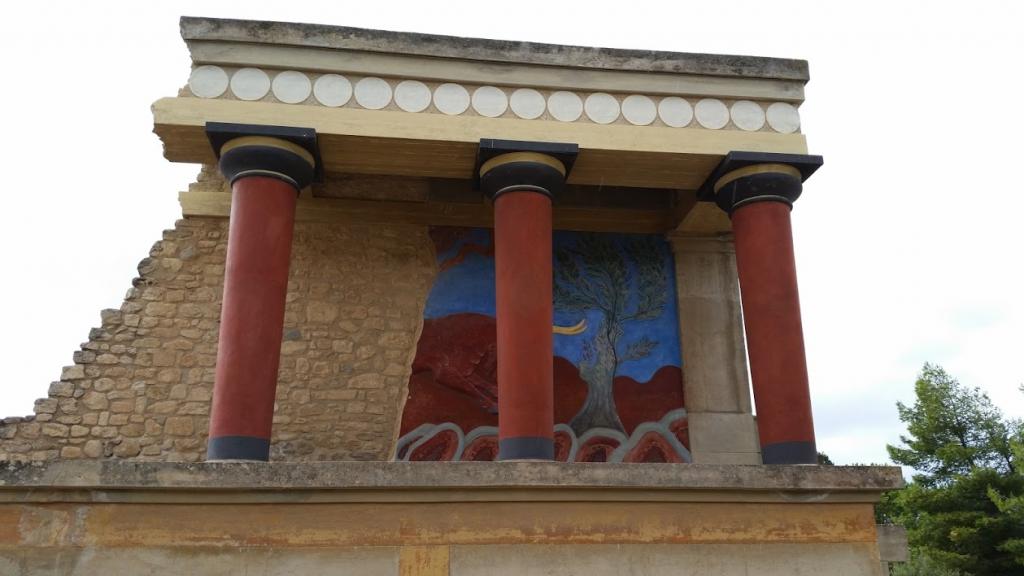 As Jack and I exchange stories about Knossos over our lunch of fresh baked fish, he gives me a copy of the booklet he uses for his Minoan lectures, The Knossos Calendar: Minoan Cycles of the Sun the Moon the Soul and Political Power. He points out an interesting detail in the book.  Just as at Stonehenge, every year on the summer and winter solstice the sun rises to shine off specific standing stones, here at Knossos the rising solstice sun slants through the doorway of the palace throne room and lights up the throne, then later shifts to an unidentified spot across from the throne forming an invisible X.

Two exits lead from the Throne Room, one to a set of nine rooms and the other to storage rooms where the image of a Snake Goddess was fund. The upper floor probably has staterooms used for ceremonial purposes. The Snake Goddess Sanctuary lies to the south of the Throne Room. It was here that one of the famous artifacts of Minoan Crete was found which is among the treasures in the Museum at Iraklion.  A little farther along is the Cup Bearer’s Sanctuary named after a life-size fresco that shows a religious scene of temple attendants holding a conical rhytha. 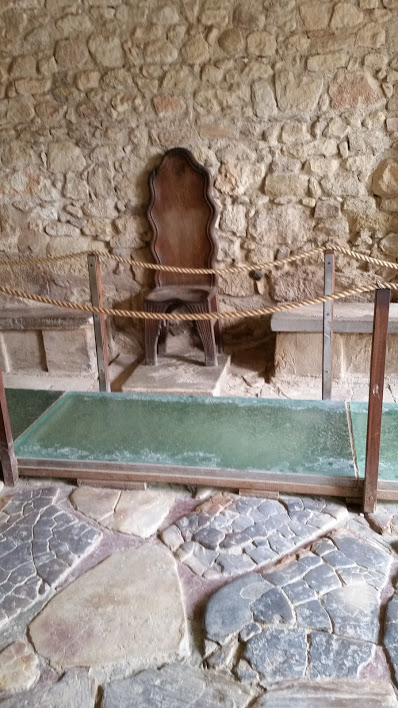 The north entrance of the palace was through the North Pillar Hall which may have been the main public entrance into the palace. Above the hall, there may have been a place where people gathered when they arrived at the palace. Archeologists found several incised clay tablets, suggesting it may have been an administrative area. Parts of the hall have been restored including some of the pillars and steps.

Immediately south of the NorthPillar Hall is the famous Bull Chamber with its painted red columns and painted fresco. Archeologists found the famous bull relief fresco here. There were also storerooms in this area with a large number of clay cups – indicating it may have been a kitchen.

The highlight of the East Wind is the Grand Staircase and the rooms below it. I descended the steps down to the Hall of the Double Axes. This may have been the location of the royal apartment where there are remains of bathing rooms.

As I strolled those ancient palace rooms and wandered along the Royal Road, one of the oldest and best preserved ancient roads in Europe, I couldn’t help by feeling the presence of ancient spirits, just as my friend said he had encountered them on his first visit there. 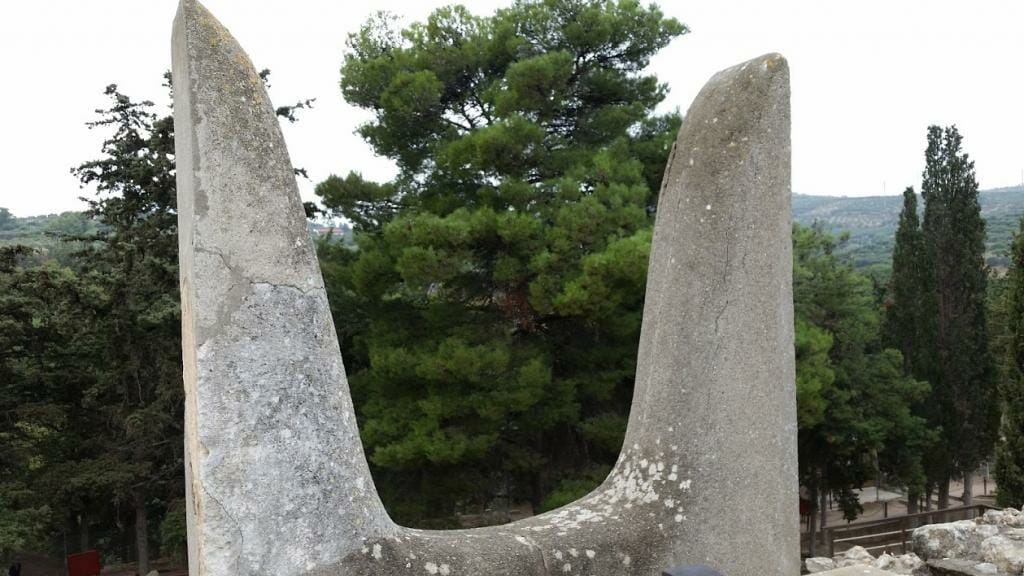 As I strolled the grounds following the well-marked pathways and stairs to various palace locations.I could still capture the essence of its former magnificence and imagine what life might have been for the Minoan people who once lived there. 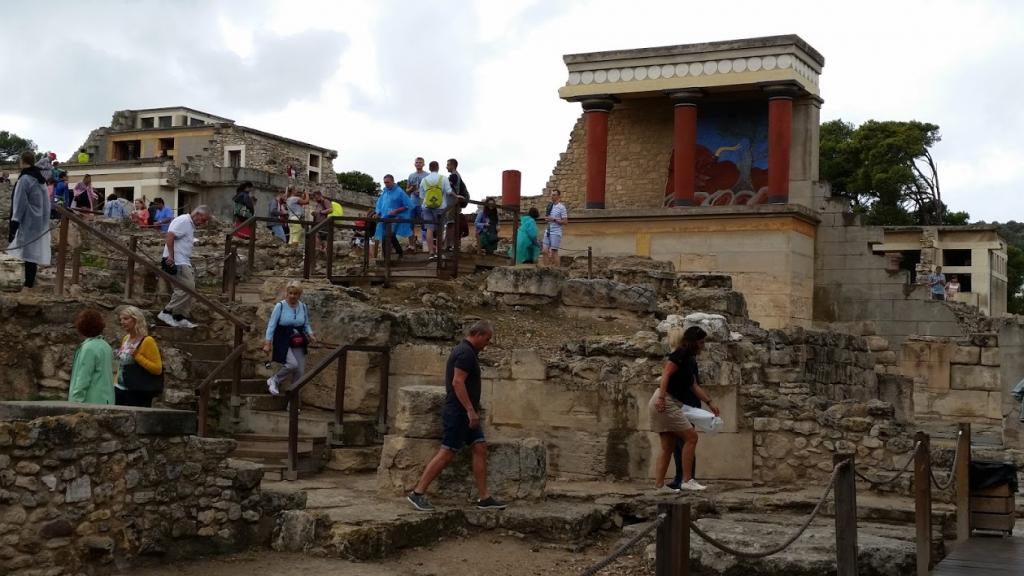 Over the years, Knossos has suffered major destructions from fire and earthquakes. Around 1450 BCE there was widespread destruction through the whole of Crete destroying many of the other sites. Many of the residents left the island and traveled by sea up the coast from Egypt to Syria. Recently I reviewed Dr. Dempsey’s second novel People of the Sea which relates the story of the Minoan sea ventures.

The next time I visit Iraklion, I hope my friend Jack will accompany me to Knossos.  Perhaps we might even meet some of those ghosts!

W. Ruth Kozak wrote Crete: Return to Knossos to Discover the Minoan Culture for EuropeUpClose.com. She also wrote the following books about Greece and Greek History: