Greece is beautiful in any season, but one of the most special times to visit is during the Greek Easter. Greece follows the Julian calendar, so Easter is calculated differently than “Western Easter”, which is calculated on the Gregorian calendar. And if you go, one of the best places to celebrate is on the island of Patmos. This is the island where 2,000 years ago the disciple John, known as St. John the Evangelist, was exiled by the Romans for preaching Christianity in Asia Minor. It was on this island that John wrote his book of the Apocalypse, known as Revelation. 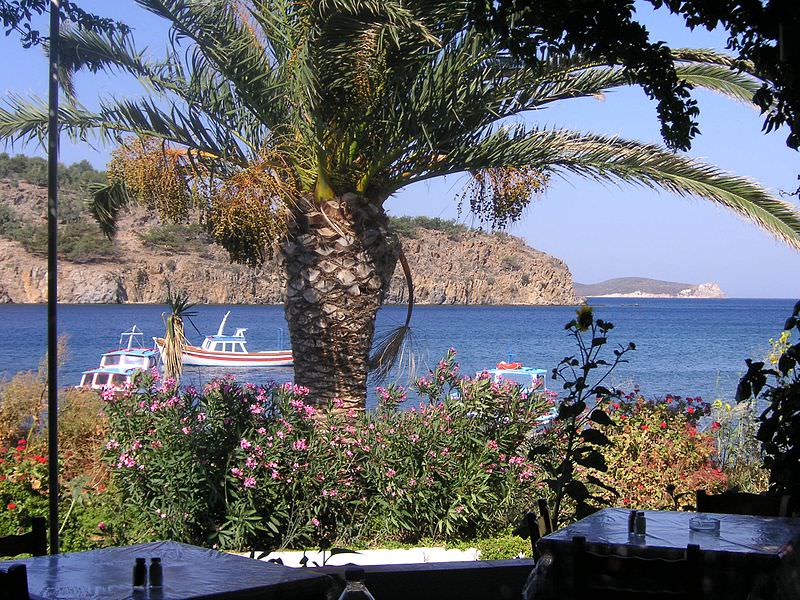 I arrived on Patmos a day before the celebration. This is the beginning of the religious holiday that in Greece is observed with more pageantry than Christmas. On Good Friday, the funeral bells toll from early morning and the flags fly at half-staff. It is a day of mourning.

At the port village of Skala, the funeral processional has begun. The epitafios, a small casket decorated with red and white carnations and icons of Christ, is borne by men of the village. This casket symbolizes the body of Christ. The processional is led by the priests (pappas ), resplendent in rich ceremonial robes. They are followed by solemn young altar boys who hold candles and crucifixes. As the casket is carried through the village, a Byzantine icon depicting the crucifixion is held aloft on a wooden cross wreathed with flowers. The narrow streets are lit by candles and the glittering gold of the relics. The heady fragrance of incense wafts from the censers fanning out over the throng. As the pappas chants the litanies, a men’s choir sings the story of the crucifixion. 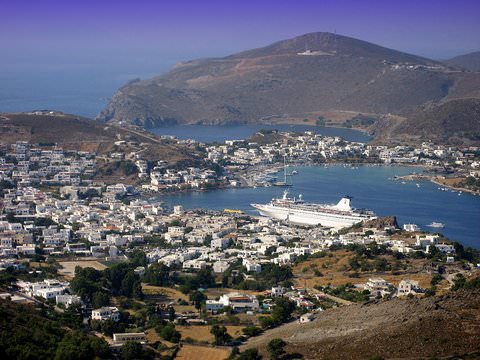 Patmos is one of the Greek Dodecanese Islands near the Turkish coast. It was once noted for its shipbuilding and trade and many of the traditional mansions have been restored. Today, Patmos is known mainly for the Monastery of St.John the Theologian and for the pilgrimage at Easter which attracts visitors from all over the world. There is serenity on Patmos that you will see reflected on the faces and in the attitudes of the people. The Patmians have preserved the dignity of this ‘holy island’.

Looming above the village is the Monastery of the Theologian, a UNESCO heritage site. The monastery was founded 900 years ago and has a 30-member community. Some of the richest treasures of Greece are kept there, including priceless icons, vestments and parchment manuscripts. This is the ideal place to experience the traditions of the Greek Easter ceremonies. 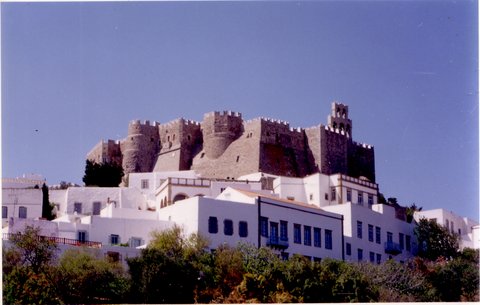 The crack of fireworks and the chiming of church bells awaken me the next morning. I climb the hill from the port to the village of Chora, and the sound of fireworks crackles like gunfire, resounding across the pastoral hills. As I reach the crest of the hill, I see the tiny white-domed Church of the Apocalypse. Below it is the cave where the apostle lived. Visitors are reminded that it is a sacred place. It was here that John received the terrifying visions described in his book of the Apocalypse. The cave is a place of meditation and is preserved as a reminder of the struggle between good and evil. 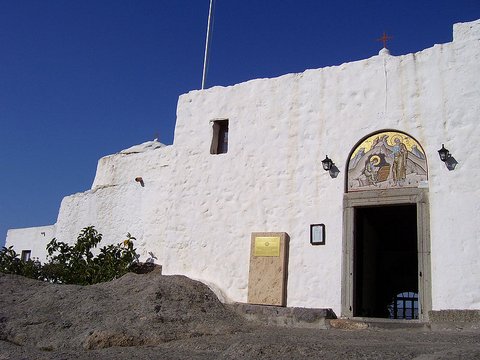 Church of the Apocalypse

When I reach the monastery chapel, a crowd is gathered, spilling out into the courtyard. The cobblestones are strewn with branches of hyssop, its purifying fragrance mingling with the scent of incense and bees-wax candles. A monk begins a rhythmic hammering of a long wooden beam suspended in the entrance of the chapel. This beating of the talanton symbolizes the risen Christ and heralds the beginning of the Ester mass. 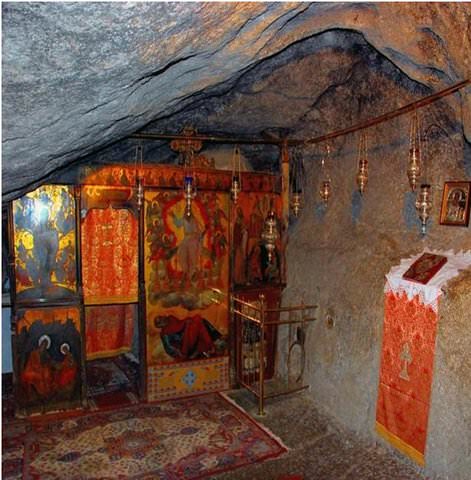 Cave of the Apocalypse

At midnight, as the bells begin to peal, the monks and priests file out of the chapel to join the throng of worshippers. As the pappas announces the joyous proclamation “Christos Anesti! Christ is Risen!” his words are echoed in unison by the worshippers. He touches the flame of his altar candle to the wicks of the slender wax tapers held by each celebrant. One by one, the flame is passed on until all the candles are lit and the courtyard blazes with light. 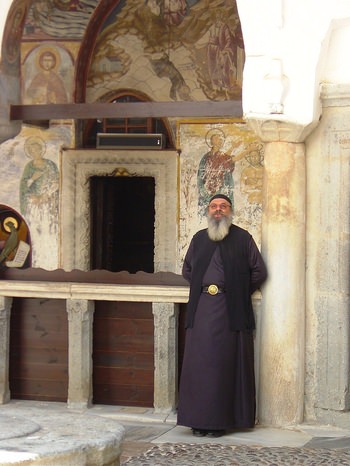 For the children it’s the time to collect the brightly colored eggs distributed by the priest. These red eggs, polished with oil until they shine with a wax-like flinish, are symbols of the blood of Christ. The children play a game, tapping the ends of the eggs together to see who’s is the last to break.

Now the celebration is over and I follow the celebrants through the streets of the village as they carry their lighted candles home. Each flame is carefully protected until it scorches a cross above the lintel of the doorway. This will ensure good fortune and God’s blessing for the year. 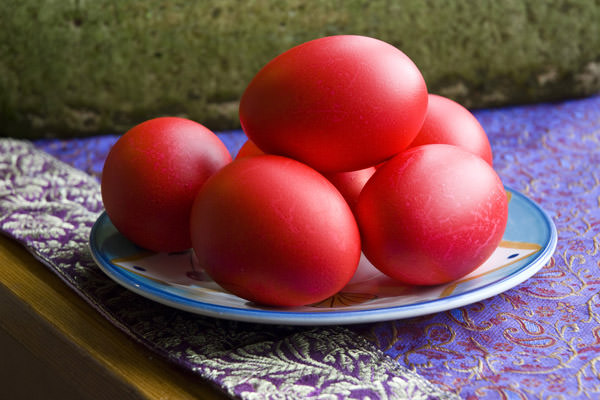 Before hiking the four kilometres down the dark road through the cypress groves to the port, I stop by a tavern to dine on roast lamb and mageritsa, the traditional soup made of lamb’s innards eaten by the Greeks at Easter. The meal is followed by lambropsomo, a sweet Easter bread decorated with red eggs placed in the centre forming the tips of a cross.

On the edge of the bay someone has set off a red flare which fans out over the harbor, illuminating the fishing boats in their moorage. Down on the beach, one last rocket hisses and whines, then all is quiet. The trace of gunpowder smoke lingers in the air. But there is a spirit of peace on Patmos.

I’ve celebrated Easter many times in Greece. If you are in Athens be sure and go to the Platia Mitropolis in front of the Mitropolis Cathedral. Bring along a decorated candle. There are Easter masses celebrated at churches all throughout Athens and in the villages. You don’t have to be a religious person to enjoy the pageantry and participate in this special cultural event. This year Greek Easter Sunday is May 5.

[...] Celebrating a Greek Easter: Candles & Fireworks @ Europe UpClose – Ruth Kozak reminds us that Easter isn’t all bunnies and chocolate eggs with her look at the Greek traditions alive on the island of Patmos. Now this is a place we want to celebrate the holidays! [...]

What a gorgeous post. The churches are gorgeous, and not a chocolate bunny in sight!