Since returning from Venice, Italy a few days ago, I have been pondering why my experience of spending four days at The Venice Carnival left such a deep and persistent impression – more than any other trip I have taken to numerous outstanding places throughout the world. I have come to the 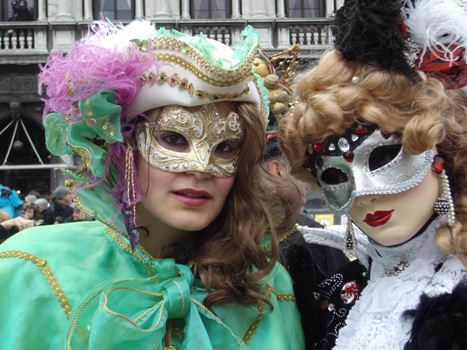 conclusion that Venice Carnival gets under your skin because for some 10 days the city and her people go back in time and really become people living out the times of the Renaissance – as opposed to putting on a show.

Roaming the streets and encountering mask after mask, I got the feeling that Venetions couldn’t care less if visitors and tourists came to their city during Carnival. Venetions seemed to be caught up in the moment as expressed through their outfits and sophisticated manners. I kid you not, more than once did I have the urge to curtsy when I came face to face with the Doge!! 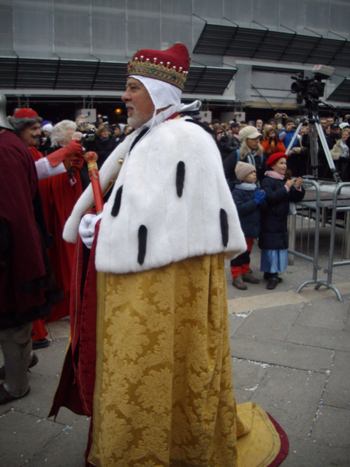 opportunity to make my dream come true. I also decided to really get into the spirit of things and immerse myself in whatever was going on in Venice.

To get started in style, I booked myself into a hotel which, fittingly, is called Serenissima. Conveniently located between the Rialto Bridge and St. Mark’s Square, the little hotel’s location is a perfect point from which to explore Venice in all directions.

One of the objectives of my stay was to have dinner in a Palazzo, in traditional costume of course. So, on my first day, I made my way across the Rialto Bridge to a shop which sells masks and rents costumes. I immediatly knew it was my lucky day. Though cold, the sun was shining and the rippling waters of the Grand Canal were reflecting the colourful facades of all the impressive Venetian buildings. As I watched the lazy gondolas and darting vaporetti make their way through this enchanting city, I was reminded of the added pleasure of not having to contend with cars over the next few days. It would, instead, be foot traffic only over the twisting, cobbled alleys. With an ever increasing number of people arriving in the city a day before the official beginning of Carnival, their donning of the typical Carnival face masks made it apparent that they were anxious to get the party started.

Dont’ Miss: Our Editor’s Picks for where to stay in Venice.

The costume shop in question is called Leone d’ Oro, and is just across the bridge. You can reserve costumes in advance through the official Carnival website as well as book tickets for the events. I did not reserve an outfit in advance as I wanted to see, first-hand, just what was on offer. Upon selecting a costume, the transformation into a lady of times-gone-by was a memorable experience.  Two dressers are needed to tie the corset, get into the ‘undercarriage’ for the hoop skirt, put on the underskirt, and finally the dress. It is then topped off with a distinctive hat. The result made me feel like a princess. The shop, of course, offers plenty of vintage outfits for men as well. 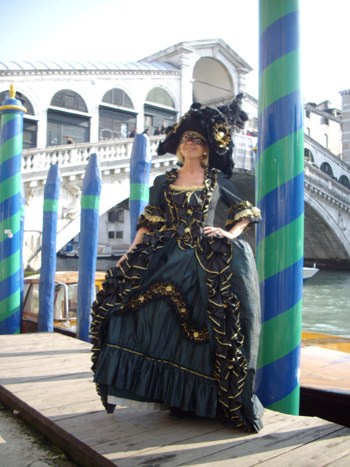 I proceeded to St Mark’s Square to see the preparations for the evenings concert. I then walked along the water, crossing bridge after bridge. Upon reaching the famous Danieli Hotel, I took a vaporetto back to Rialto.

I had originally intended to go to the Opening Ball, but it was cancelled by the organizers. So, instead, I took a gondola to the Ball of the Duke in the Palazzo Pesaro Papafava which overlooks the Canal de la Misericordia. The entire palace was illuminated by candle light and orchestral music by Offenbach and Strauss entertained as did professional dancers; everybody wore their best masks and costumes and everybody had a great time. As I said, nobody seemed to be in disguise. People behaved as if these costumes were their every day garb which makes the entire Carnival experience so unique. It also helps that this unique city is an ideal stage.

Today, though, the ‘angel’ doesn’t walk a tight rope. Instead, she is launched in a harness from the balustrade just below the ‘angel’ which sits on top of the Bell Tower and she glides to earth along steel ropes; all of which is accompanied by music from Vivaldi. 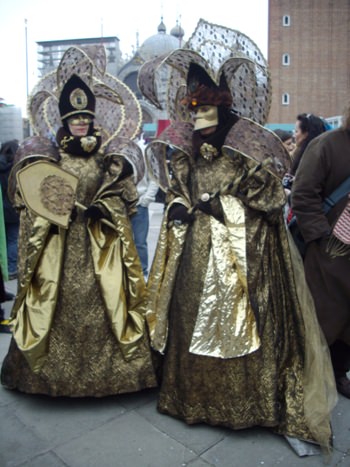 The square was absolutely packed, so I was glad to discover that an enclosed area had been roped off where you could enter for a fee of 20 euros to watch the spectacle without being crushed by the mass of people. Here you could follow the parade of the costumes and the arrival of the court of the doge up close.

The fountain in the middle of the square spouts red wine and, mercifully, a drink is included in the admission fee. All the Renaissance people assemble there as well, to parade, chat with each other, and show off their glamorous costumes and masks. Ladies wave regally, gentlemen nod graciously and some couples dance cotillions. You really don’t know where to look first, there is so much to see. Although at first it seemed strange to don a mask all day long, I got used to it very quickly and, indeed, would have felt out of place had I not done so.

I also took a vaporetto to Murano to visit the glass factories. Although I found the huge glass sculptures which are displayed in tiny parks on the island more interesting than the glass making itself.

I finished my visit to Venice with another intriguing event; a murder and mystery tour. This guided tour through Venice’s most secret alleys, along with tales of outragous things was a lot of fun. The guide was an actor in costume and he surpassed all expectations because he not only told the stories, he acted them out. There is no doubt in my mind that I will be back for The Carnival of Venice next year. See you there?

[…] celebrations and all-around fun mark the annual Carnival in Venice. Held just before lent, the Venice Carnival is world renowned; if you want to participate, you will need to plan ahead to secure your […]

The Crazy Days! ‘Carnival’ all over Europe

[…] traditions, the largest and most well frequented being those held in Venice and Viareggio. The Carnevale di Venezia dates as far back as 1268, though lawmakers and authorities tried to thwart the subversive festival […]

Very tempting article. I feel the carnival is a must see event.

The vaporetto is expensive if you buy the ticket each time, but you can get yourself a 1 day, 2 day, 3 day, 4 day, 5 day or 7 day ticket which allows you to hop on-off the water bus easily and ina cheaper

A very valid comment, Mark. One place where you get the real thing and can even make your own mask is Benor Maschere Venezia near Campo San Giacomo dell'Orio.I have every intention of making my own next year.