If Prague’s carousing stag parties wore you out, Vienna feels too much like a museum, and Budapest seems too sprawling, the cure is Bratislava, capital of Slovakia. 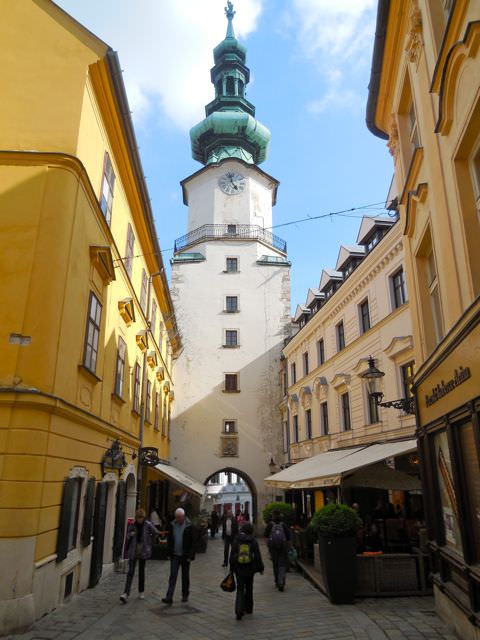 It is a charming, compact city, rich in architecture and history, buzzing with energy and seriously underrated. It is also cheaper and much less crowded than the other cities on the Central European loop and well worth a visit.
Rude souvenir t-shirts on sale in Old Town ask, “Where the *&%@# is Bratislava?”
Look at a map and you’ll see; Bratislava is in the center of Central Europe, an hour by train from Vienna, 2.5 hours from Budapest, and about five hours from Prague. Indeed, a century ago a trolley (lokalbahn) took Viennese day-trippers here for opera and Slovak wines. We took the Twin City Liner boat from Vienna and buzzed along the brown Danube past tiny fishing huts and ruined hilltop castles in 75 minutes (20 Euros) and landed on the quay a short walk to Old Town. Several River Cruise lines also dock in Bratislava. 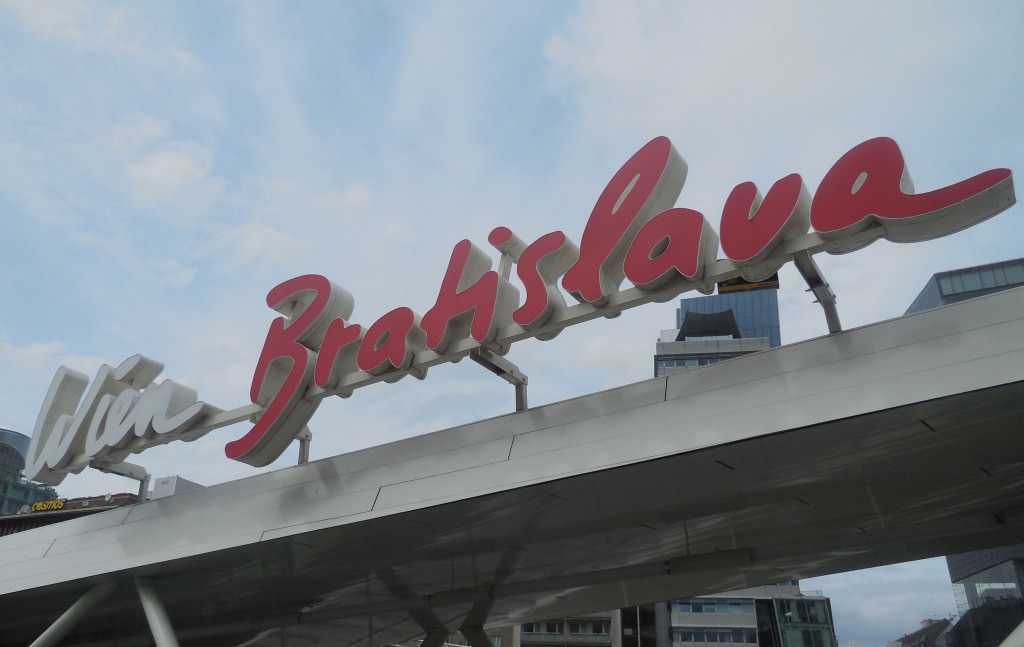 Besides historic sites, what makes Bratislava so appealing? I believe it is the invigorating fizz of an explosion of economic and political change mixed with history every bit as rich as the other cities on the Golden Triangle (Prague-Vienna-Budapest). Slovakia’s economy was dubbed the Tatra Tiger for spectacular growth once it joined the Eurozone in 2004, and young professionals have been flocking here for work ever since. Add 70,000 university students to this booming city of half a million, and you’ll find restaurants packed at 10 pm, unlike Vienna after the Opera, when the city was closed up tight.
The best way to explore Bratislava is a walking tour, either with one of the guides swarming around the river boats, through the Tourist Office, or self-guided. We used the Rick Steves’ tour in his Budapest edition. Begin at St. Michael’s Gate, the last remnant of the city walls, and explore Michalska Street, topped with a clock tower and lined with eateries and chocolate shops. Jog left and head for the Main Square (Hlaven Namesie), tourist ground zero. Here you’ll find craft and souvenir markets, century-old cafes as atmospheric as Vienna’s (Café Roland and Kaffee Mayer), and the city’s most important museums, the City History Museum, Apponyi Palace, and one square over, the Primate’s Palace. 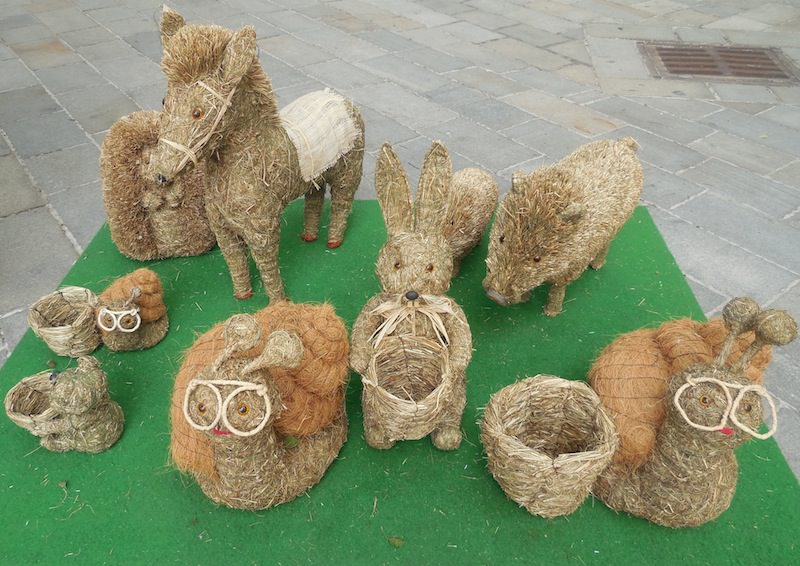 Wares at the Bratislava market

Old Town Hall’s yellow tower features one of many French cannonballs embedded in Bratislava’s walls. Napoleon caused considerable damage in 1809, but Slovakia’s revenge (the statue of a barefoot bronze soldier) leans over a park bench in front of the French Embassy, one of several life-sized statues in Old Town. Look at the ground for Cumil (the peeper) poking his cheerful head up from a manhole. The city installed several other statues for no other reason than to attract tourists, like Schoner (‘beautiful’) Naci, a cheery old carpet cleaner who offered gifts to the ‘beautiful’ women who caught his eye. 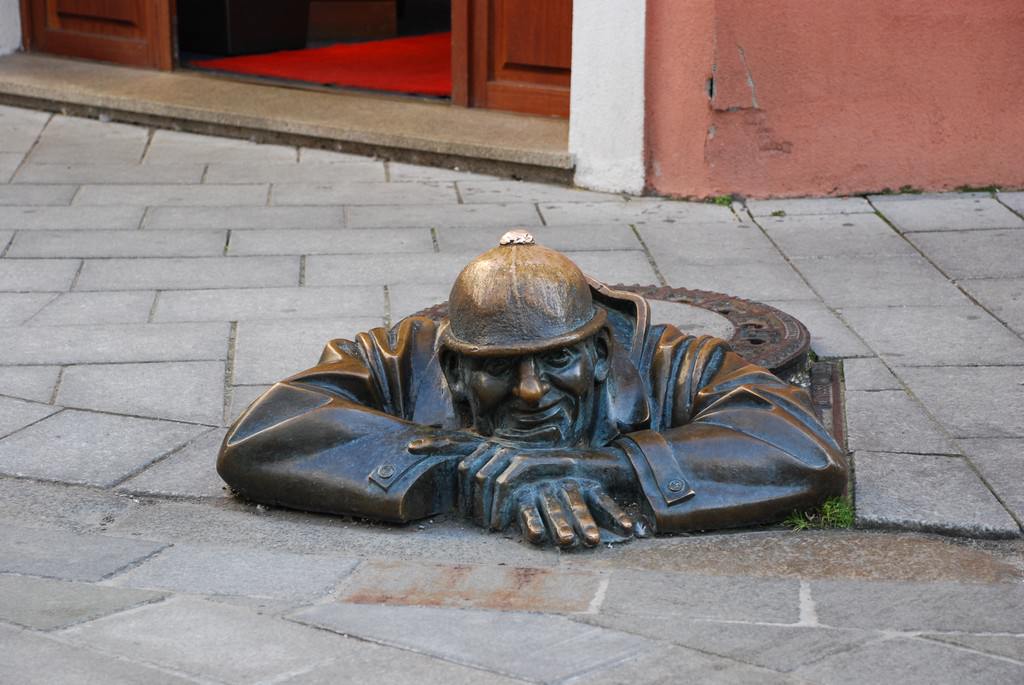 Keep walking downhill past McDonalds and turn right into Hviezdoslavovo Namestie (the Promenade), a long paved open space, anchored at one end by the Slovak National Theater and the Philharmonic and at the other end by St. Martin’s Cathedral, where 19 Hungarian rulers were crowned. These three buildings remind visitors of Bratislava’s glorious imperial past. Maria Theresa, the Habsburg Empress, was in fact crowned in St. Martin’s Cathedral and you can follow the royal processions by golden crowns embedded in the pavement (coronation walk). You’ll pass the heavily fortified American Embassy on the left and a statue of Hans Christian Andersen, who had a wonderful time here, as did Mozart who played for the Empress in Bratislava when he was six. 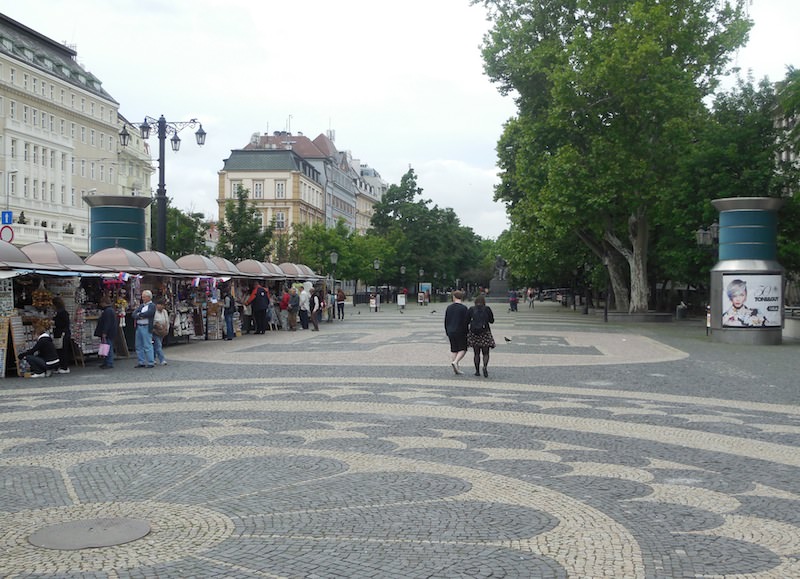 The Promenade ends at the square in front of St. Martin’s Cathedral, a place which lays bare the surging currents of Bratislava’s 20th century history. The image of a vanished Synagogue is etched into a stark black wall directly opposite the cathedral; the memorial a few feet away testifies to the 90,000 Slovak Jews killed by the Nazis. This Synagogue was plowed under by the Communists to make way for the freeway roaring overhead. The cathedral shudders from the heavy traffic, but the Communists believed they were building a more modern, egalitarian future. It is fortunate any of historic Bratislava still remains. 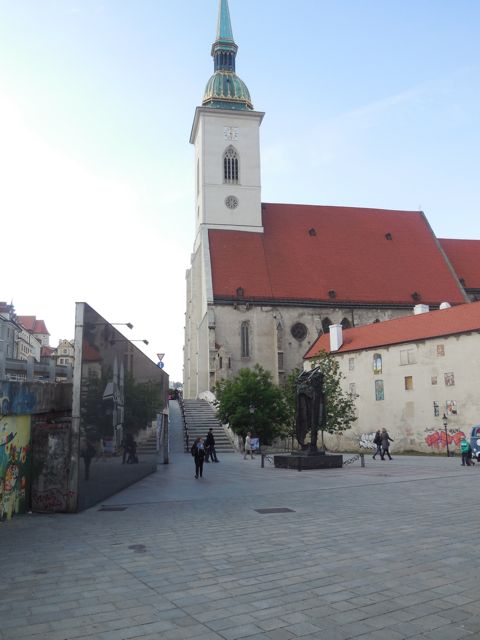 You can walk across the bridge here and have a drink at the “UFO” café/bar atop Novy Most (New Bridge). Locals hated the Jetson-looking orb atop the bridge, but it has been updated into a fancy overpriced bar and viewing platform. And it really does look like a UFO. Or you could turn left along the river and explore Eurovea for a glimpse of Bratislava’s future. Eurovea is a futuristic shopping mall and residential development on the Danube. 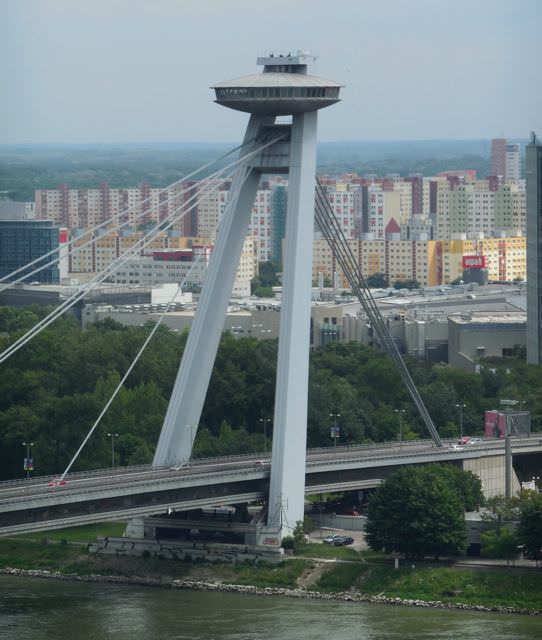 The Art Nouveau Blue Church, a short meander past the Promenade behind the National Theater, really deserves the name. It faces a derelict, abandoned Soviet office building, visible evidence of Bratislava’s post-Communist transformation. 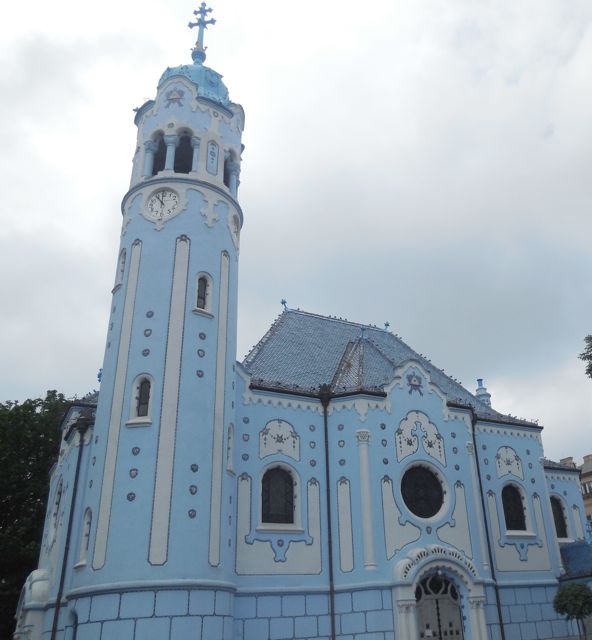 At Grassalkovich Palace, the presidential palace on Stefanikova road on the way to the train station, you can see the hourly changing of the guard, Ruritanian-looking uniforms, plumed hats, and all. Hike left up the hill  just beyond here to explore Slavin Hill, a Soviet memorial to the 6,800 Russian soldiers who died liberating the city in 1945. Of course, they neglected to go home for nearly half a century and left economic collapse in their wake. 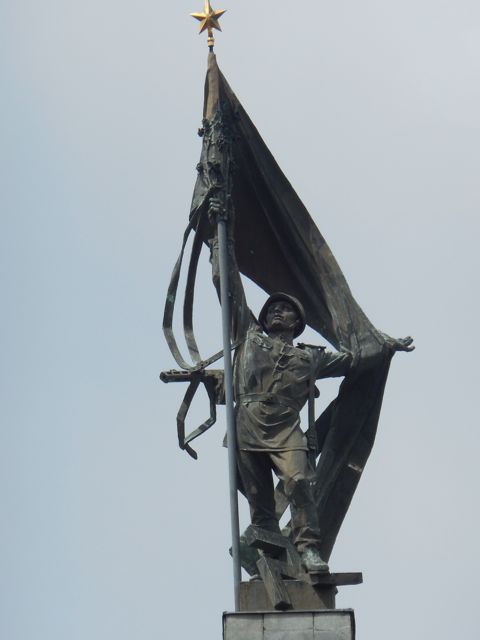 If you have a bit more time, Devin Castle is a short bus ride up the Danube and is evocative for its Iron Curtain monument; the Morava river divided Austria (freedom) from Slovakia (Soviet bloc) and guards shot many escapees on this spot. If your hotel or the tourist office can arrange a day trip to the newly restored Red Castle (Cerveny Kamen) with a stop at Modra and Pezinok for wine-tasting on the “Little Carpathian Wine Tour,” don’t pass up the opportunity. We meandered into a family winery in Modra that had been in the family since 1593 and ate goulash that had been simmering in a barrel all day. 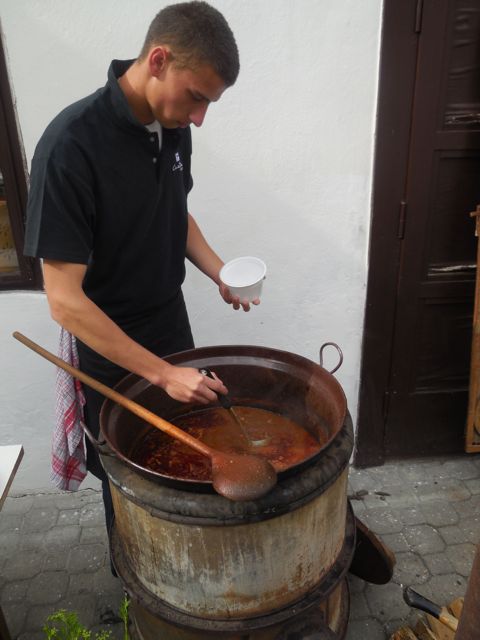 But you aren’t done with Bratislava until you’ve seen a few sights a bit away from the town center. Locals say the Castle looming over the city looks like an upside-down table, victim of an ugly Communist-era restoration, and it is only worth visiting for the view of Old Town, the UFO, and rapidly-gentrifying Petrzalka housing estates across the Danube. 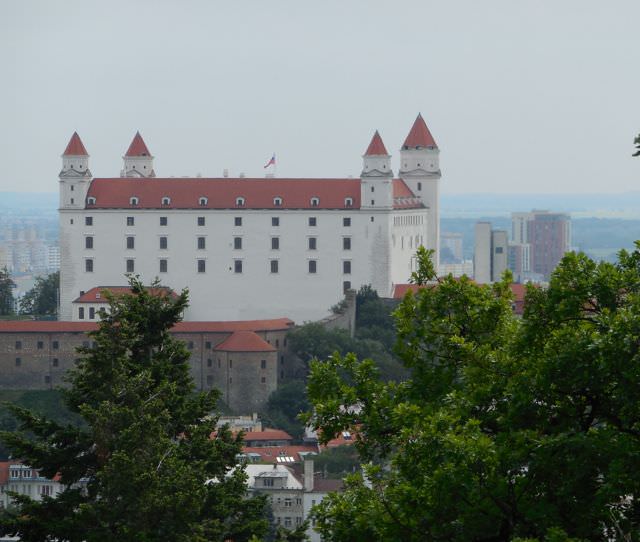 Bratislava’s tourist future is about to explode, so now is the time to explore. By 2016 a TGV train from Paris will deposit passengers in a new train station, and it will be too late to say, “I was there before it became a hot destination.”
Written by and photos by Guest Contributor Kathy Fritts for EuropeUpClose.com
Kathy Fritts is a retired school librarian who has lived and worked in six different countries. Now she travels for fun and writes to educate and encourage readers to take a chance and enrich their lives by traveling.

Lived for one and a half years in Bratislava a few years ago and still really enjoy each visit of the city. Bratislava might be small, but the city got it’s own charm to say the least. :)

And sadly most people don’t even consider a visit of Bratislava, which is really sad considering what it actually got to offer. I cannot even remember how many times I have needed to explain to people where Slovakia is and that it is actually no longer a part of Czechoslovakia.

In my opinion Bratislava is a very nice city, because it is medieval and modern at the same time. That's why it is so interesting for me. And the city is also very compact and green.

Is Bratislava worth visiting? Travel bloggers reveal what to expect - The Journey Journal

[…] I really really liked Bratislava and found it charming and just the right size to enjoy comfortably. I also like its liveliness and all the news businesses coming to town, which makes it seem like a growing town. I truly had no idea how lively the town was going to be, nor how much history was underfoot (Mozart played there for the Empress at the age of 6! Who knew?) More of a youthful but not crazy night life after 10 pm, unlike Vienna where they roll up the streets, it seems, after dark. Charming little souvenir market and coffeehouses on the main square as atmospheric as Vienna’s. Read her post Bratislava, the new Capitol of Cool. […]

Good coverage on one of our favorite places in Europe but you didn't mention the National museum next to the waterfront. It is well worth a visit while in Bratislava. The river boats only spend four hours in Bratislava so you really need to go back on your own and enjoy the city, food, and wonderful people who live there.

I don't say that Bratislava is the capital of cool but just a city, you have to visit once in your life !