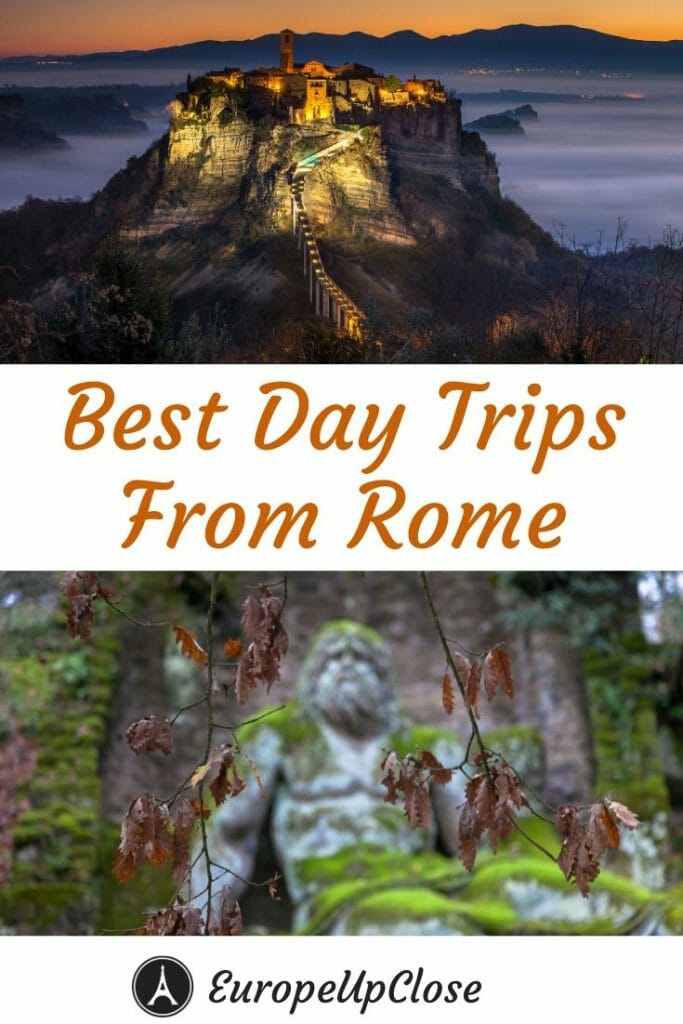 Rome is an amazing city and there are so many top sights to see in Rome that it can occupy your for weeks. But sometimes the hustle of the city can get to you. The honking, the crazy driving, the sheer masses of people. To break up your stay in Rome, I recommend a day trip and get out of the city. Here are some of the best day trips from Rome that will are great for any age and interest.

About 70 kilometers northwest of Rome, just outside the small town of Bomarzo, lies an exceedingly strange garden: Parco dei Mostri (Park of Monsters.) Scattered among several acres of plane trees and shrubs are sculptures unlike any in classic museums or, in fact, almost anywhere in the world. Walk the path and you’ll come to an enormous stone elephant, a dragon enjoying a human meal, a colossal head with a gaping mouth, a horse with wings, a mermaid siren, and much more.

This unusual place, privately owned but open to the public, was commissioned by Prince Pier Francesco Orsini, known as Vicino, in the mid-16th century in honor of his beloved wife Giulia. The designer, Pirro Ligorio, was a noted architect of the time who also designed the famous gardens of Villa d’Este in Tivoli and oversaw the construction of St. Peter’s cathedral in the Vatican.

The statuary in the Park of Monsters is impressive, if not downright weird in spots, but it’s more playful than frightening, even though giants and dragons are gobbling other creatures. It’s a fine place to take children for a chance to run around outdoors and gawk at the figures. Some can even be climbed on.

Among the animals, ogres, nymphs, and gods, Ceres lounges with the abundant fruits of the earth in a bowl on her head, while old, bearded Neptune towers over a basin. Thick green moss covers his shoulders. In one corner is an oddly tilted house, the Casa Storta, “Twisted House.”

It’s fun to visit now, but the park was originally designed not to please, but to shock. Vicino had just been through a war, held for ransom, and seen a friend killed, and he arrived home only to have his cherished wife die. The park was to be an expression of his grief. Knowing this makes sad sense of the symbolism, such as the immense head with a wide-open mouth, as if in a scream.   The inscription reads, “all reason departs.”

Centuries later, the surrealistic park inspired artists such as Jean Cocteau and Salvador Dali. Paintings, stories, and even an opera were composed.  Gradually, over time, the park became neglected and overgrown, but it was restored in the 1970s and is now a tourist attraction.

Nearby Bomarzo is a medieval town on a limestone cliff, overlooking the Tiber Valley. It’s a great place to explore on foot, with narrow stone streets and flowers spilling over window boxes. And, there is even a castle fortress at the top of a nearby hill.

Civita di Bagnoregio ranks high as one of the most unusual villages in Italy and makes for one of the best day trips from Rome, albite a bit hard to get to. This is the place to see when you want to step into history and a strange, almost fantasy landscape less than 100 miles from Rome.

The Bagnoregio part has the charm of Renaissance architecture, cozy piazzas and a good restaurant, Hostaria del Ponte, with a marvelous view.  Civita is quite different. To get to this tiny hilltop settlement above the Tiber River, you walk from Bagnoregio for about a kilometer on a concrete footbridge that crosses an abyss. This is the only way to get to Civita. It’s steep toward the end, with stone steps, but finally, you walk through a tunnel and reach Civita’s quiet—very quiet, with no cars—streets.

There are several art studios, ancient buildings, a church on the central piazza, places to sip wine, pots full of flowers, and not much more. Only a few people live here. The reason Civita is so unusual is that it is disappearing. They call it “the dying city” because, gradually, over many centuries, erosion and earthquakes have tugged away at the tufa rock until only this small part remains.

In Etruscan times, it was a sizable city above fertile valleys and winding streams in what is now the Lazio region. But those streams ate at the plateau and eroded its clay and sand base. In every earthquake, exposed tufa stone and parts of the city tumbled into the valleys. You can see the evidence today, in narrow streets that end abruptly at the edge of the cliff and in walls still standing.

The village is riddled with tunnels and caves; some may have been Etruscan tombs. Some are used as wine cellars and cisterns. Everywhere you turn, the views across the collapsed hillsides and wide barren landscape, as far as the Umbrian mountains, are astonishing.

Twice a year, the village holds “La Tonna,” a festival that includes donkey races. There’s just one place to stay, a friendly 3-room B&B on the piazza (Piazza del Duomo Vecchio).  It’s also a restaurant, Antico Forno, serving excellent local cuisine indoors by the fireplace or outside on the square. Osteria Al Forno di Agnese is a good place for a simple and inexpensive meal.

At Rosanna and Antonio’s Wine Cellar, you’ll be offered delicious panini, bruschetta, and homemade wines. Taste even more bruschetta and wines in Antico Frantoio Bruschetteria, and don’t miss the collection of olive oil presses, one of them some 1500 years old.

You can tour the whole village of Civita in a couple of hours, but spending more time is the way to soak in the atmosphere. It’s a car-free, peaceful, friendly bit of Italy, and it’s different from anywhere else.

Best Day Trips From Rome was written by Marilyn McFarlane  for EuropeUpClose.com