Situated at the foot of Monte Grappa, Bassano del Grappa is about a two hour drive northwest from Venice, making it an ideal day trip destination in The Veneto. This picturesque, pastel colored village on the River Brenta has two strong claims to fame: its Old Bridge, or Ponte Vecchio, and The Nardini Distillery, Italy’s oldest producer of grappa. 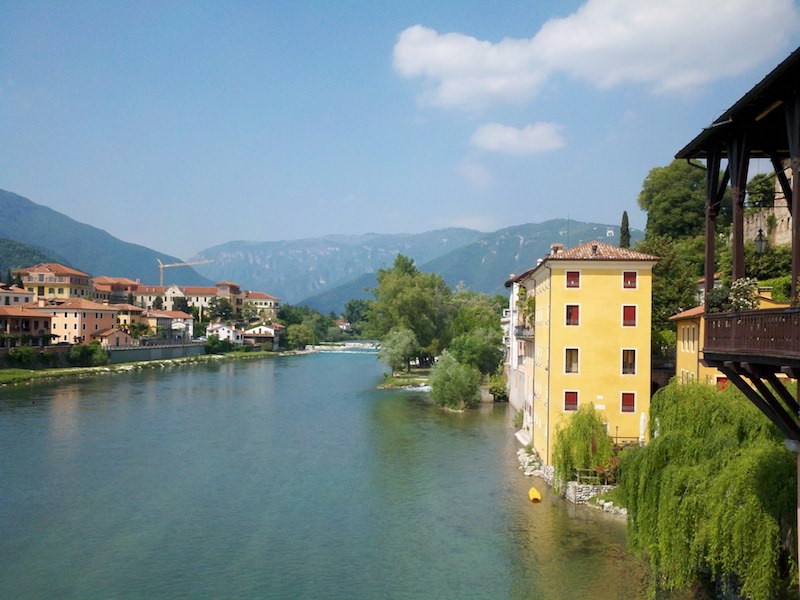 I arrive late-morning with my hiking party of five. We knock off the chill and any remaining drowsiness by downing a quick round of espressos at a local bar with a stunning overlook of the mountains and valley dotted with Christmas garden-esque villages and vineyards. Afterward, we head downhill to the town proper. It is a market day and many of the residents have turned out with shopping baskets in hand. The profusion of 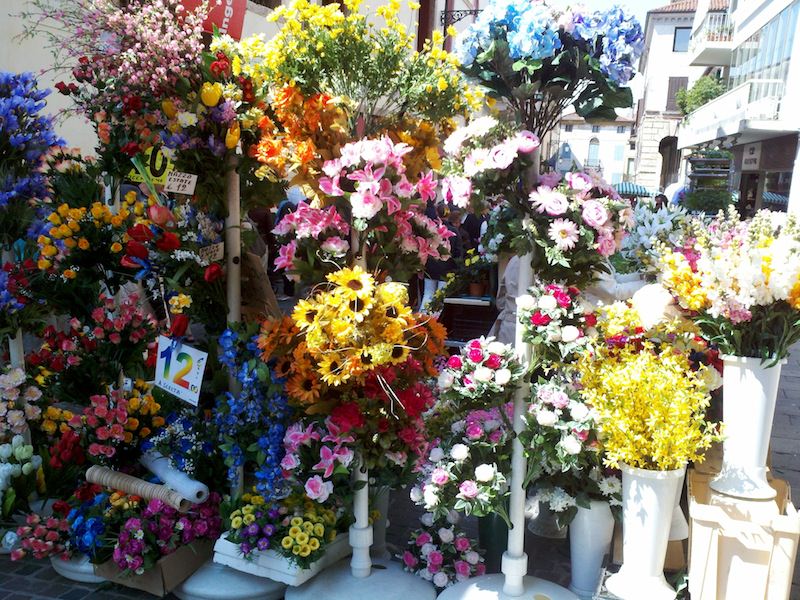 flower stalls strikes me at once. I stop to smell the roses—and the lilies and hydrangeas, too!

After the shabby chic of Venice, everything in Bassano del Grappa looks as though it’s just received a fresh coat of paint. If there’s a sagging wall or peeling façade, a brown patch of grass or a garden in less than pristine form, I fail to find it. In fairness, my early May visit takes place as the town is ramping up for its Garden Week. Still, I’ve participated in several garden weeks in the southern U.S., and never have I seen anything that could compare to…this.

A stroll along the tree-lined Viale dei Martiri provides a lovely panorama of Monte Grappa and the valley as well as a sobering reminder of Bassano del Grappa’s prominent past as a partisan stronghold in World War II. The street is named for the thirty-one partisans killed by the Nazis and hanged from these very trees. Each tree bears a memorial placard with photograph for the soldier hanged from its bowers. The Nazis’ selection of this bucolic boulevard as an execution spot assured that any remaining partisans hiding in the hills across the river would have a clear view to their comrades’ dangling corpses. 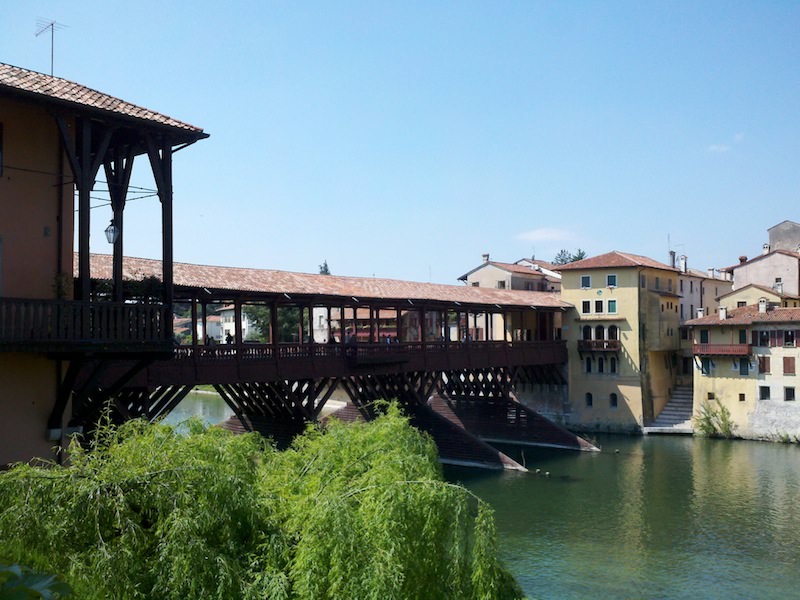 Ever since first sobbing my way through the film version of “The Bridges of Madison County,” I’ve harbored a soft spot for covered bridges. Designed by Palladio in 1569, Bassano’s Ponte Vecchio (literally, Old Bridge) was destroyed during World War II by the Alpini, Italy’s elite brigade of mountain warfare soldiers, to foil invading troops. Today two 16th century arches bracket the rebuilt wooden bridge. Though I have not yet made it to Florence, once I do (See Eat, Pray, Love -Florence, Part III) I will look upon its far more famous Ponte Vecchio, barnacled by tourist shops and clogged with shoulder-to-shoulder crowds, and wonder what all the fuss is about. 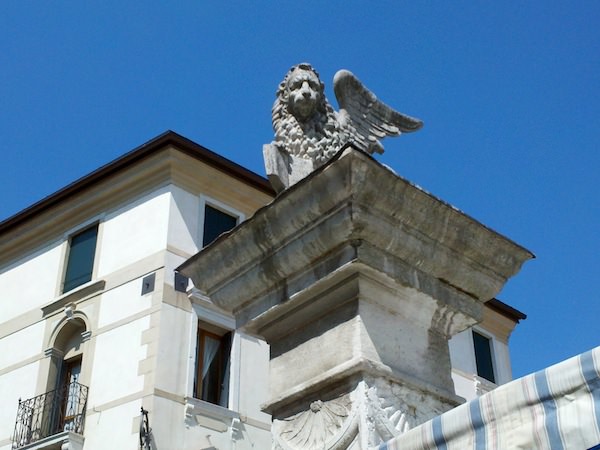 At the far end of the Bassano Bridge is the historic Nardini Distillery. (The large modern distillery and campus is located just outside the city center). The oldest producer of grappa in Italy, Nardini has housed its distillery and “grapperia” in this former inn on the far end of the Bassano Bridge since 1779. Fittingly, the bridge features prominently in the design of its product labeling. The location was chosen for practicality as well as charm, namely the proximity of a plentiful water supply vital to the distillation process and accessibility to the local regional markets, notably Venice. For both visitors and locals, it became a tradition to have a “cicheto” (shot glass) of grappa before boarding one’s barge down to Venice or to celebrate the conclusion of a business deal.

We convene at the historic distillery after lunch where a tour has been arranged. Our docent is a pleasant-faced American Midwesterner who has lived in Italy and worked for Nardini for more than two decades. We follow her down the narrow set of wooden stairs to the basement. The tour, which lasts about forty-five minutes, includes a brief and informative orientation film, a look at selected museum rooms, and a short talk on how grappa is made. Typically served as a digestivo or after-dinner drink, grappa is a high alcohol (70-120 U.S. proof) grape-based pomace, meaning it is distilled from the skins and seeds remaining after grape pressing. Made from these leavings, grappa began as a poor man’s drink. Not so now. Today grappa is a protected name in the European Union, which imposes strict regulatory requirements. To be called “grappa,” a liquor must be made from grape pomace and produced within Italy. 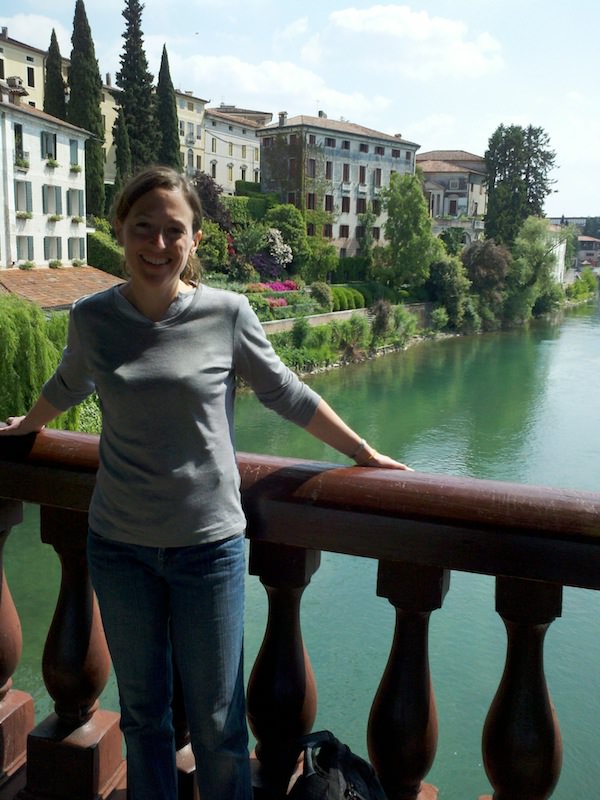 The tour ends with a tasting—yay, experiential learning! The pours are generous, the grappa smoother than what I’ve so far sampled back in Venice. Doing my Irish ancestors proud, I manage to make my way through all five varieties offered. I quite like the citrus-based Acqua di Cedro—think limoncello on steroids—and the Tagliatella, which has a maraschino-cherry finish and vaguely reminds me of Compari—on steroids.

We ascend to the main room, and this time I make sure to hold onto the rail. It is post-siesta time, and business at the previously deserted standing only-bar is brisk as customers, obviously locals, wander in. There’s also a small retail area for us tourist folk. I wait for the bartender to break free and buy two gift-size bottles of grappa, one of each of my favorites.

Duly mellow, I slip outside. It is late afternoon, and the fading sunlight casts shadow puppets on the bridge’s weathered boards. Several groups of animated, mostly young people stand about sipping their glasses of grappa, laughing and joking, storytelling and flirting as their ancestors did more than a century before. Perhaps they are aware of keeping up the tradition, perhaps not. Regardless, they are living history in the loveliest of ways.

Minimum group size: 6 guests – maximum 40.
Tours by appointment only, in Italian or English.

Written by and photos by Hope Tarr for EuropeUpClose.com