Distinctive design, world class wine and delectable food prepared by Michelin-starred chefs, rolled tidily into four days, what more could one ask for on a tour? Last September (peak season for the harvest) we took an unforgettable wine tour through the beautiful Rioja region of Spain. The small medieval villages were full of history and rich in cultural heritage. We discovered the art of wine-making from small family run wineries to models of famous avant-garde architecture. Although the entire tour was unforgettable, a few highlights stood out among the rest. 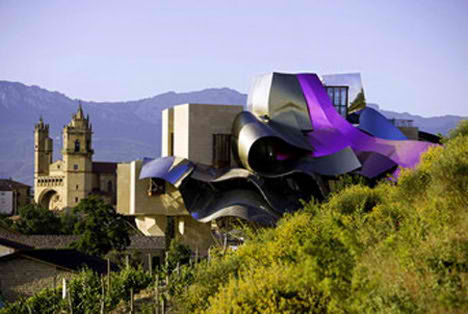 Featured on the Conde Naste “Hot List”, the Hotel Marques de Riscal , located in El Ciego, Spain (1 hour from Bilbao – Northern Spain) at the winery of Vinos Herederos del Marques de Riscal is one of a kind. This winery is one of the oldest wineries in the region, dating back to 1858. The hotel looks as if it has been gift wrapped. We were impressed with the unique example of avant garde modernity, although the hotel is set against the backdrop of an old traditional winery. Upon arrival in the evening, we noticed that the color of the hotel’s pink titanium facade changes to purple as sunset progresses. These titanium canopies provide a strong visual statement while framing all of the hotel’s windows to shelter the rooms from sunlight. 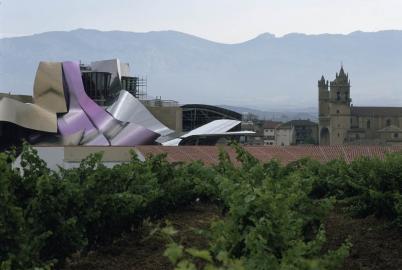 The hotel was built by world renowned Canadian architect Frank O. Gehry, who also built Spain’s other architectural masterpiece, the Guggenheim Museum in Bilbao. The interior of the building does not disappoint either, as the essence of Gehry’s state-of-the-art architecture pervades each room. Each of the 43 rooms is a different shape and size and most of the terraces boast a view of the vineyards and the town of El Ciego.The beds were super-sized and we were told the Bang & Olufsen plasma-screen in our rooms cost a whopping $18,000 each. We were almost afraid to turn on the TV!

The main building, with its waves of titanium sheeting around a sandstone core, houses 14 of the rooms, including the enormous Gehry Suite. A second building, reached by a glass suspension walkway, contains all other rooms, an indoor pool and  spa, courtesy of vinothérapie expert Caudalie. We were lucky enough to be able to indulge in unique spa treatments that combine the benefits of mineral rich hot spring water and the extracts of the grape and wine, which are rich in polyphenols. We bathed in water with red-wine extracts and received a honey-and-wine wrap, a massage and a body scrub, using grape seeds and brown sugar. It was interesting to see wine coming out of your pores; and that’s before you have a glass with dinner! 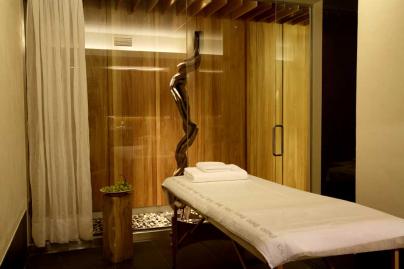 Last but not least, we had the ultimate gastronomic experience at the 1860 Restaurant. Our phenomenal meal was prepared by local chef, Francis Paniego, who combines modern Spanish cuisine with the classic Riojan cooking he learned from his mother. After dinner we went upstairs to the Wine Bar Vionteca and savored a bottle of Baron de Chirel Reserva… because we just didn’t have enough wine with breakfast, lunch, bath and dinner!

The next day we visited another wine tasting hot spot, the Ysios Winery, which is only 10 minutes away from Marque de Riscal. It was worth the visit just to see the fantastic architecture. It was the first building to be created during the time of the collaborative  love affair between Spanish wine makers and world famous architects. This winery was designed by the Spanish architect Santiago Calatrava. The building has an undulating pleated roof, looking like wine barrels in a long row. You must call ahead to arrange a tasting and cellar tour, and they don’t accommodate buses and large groups of tourists. 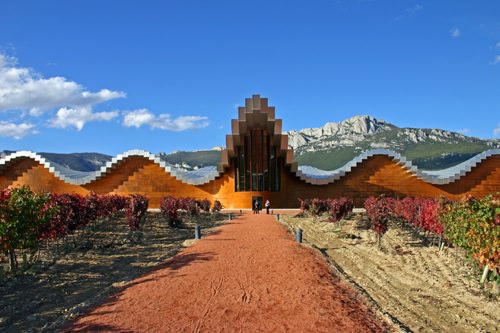 If you want to visit remarkable architectonic wineries, sample splendid wines, enjoy unforgettable meals in gorgeous surroundings, improve your knowledge about wine, and tour striking medieval villages in one of the most tourist-free areas in Spain, then the Rioja region is a spot that you must not miss.

Hello. I travelled extensively in the Aragon & Navarre regions of Spain, first in 1970, & then later in 1982. I loved the harshness of Spain, the fabled sheperds with their hundreds of sheep slipping over the landscape like a sea. The deep red wines of Navarre with strengths of 15% were common in the local's bars. A fabulous light as I came over from the wet side from France greeted me amongst the hundreds of butterflies. The roads were often unchanged from the time of the Romans, with gangs of men labouring in the heat with the smell of tar and dust from recently exploded rocks. I have longed to return & taste the pleasures of this region once again!