“Paris has another Paris under herself”, said the novelist Victor Hugo, in reference to 1300 miles of sewers, caverns, catacombs, alleys, and intersections underneath the great city. On my trip to Paris we had originally planned to tour the elaborate sewer network in honor of Hugo, who described the medieval labyrinth at length in his masterwork, Les Misérables.

However, the sewers overflowed on the day of my visit, which prompted a hasty closure and expulsion of all visitors until further notice. Naturally, the next best thing to a Paris sewer tour is a visit to the catacombs, the final resting place of 6 million Parisians and the largest necropolis in the world.

INSIDER TIP: This is a very popular activity in Paris, so we highly recommend you book skip-the-line-tickets in advance. 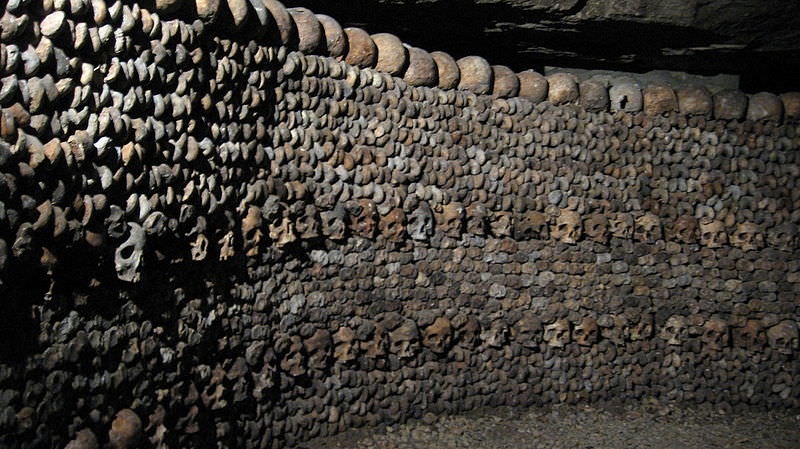 My visit to the catacombs began with a wait outside a foreboding black door that bars the entrance. Along the way to the front of the line there were several signs in multiple languages warning the squeamish to turn back from the terrifying sights below, but the signs didn’t seem to deter many people, as the wait was over an hour long.

The tour of the catacombs starts with a descent down a spiral staircase 20 meters underground. The catacombs are located in an old quarry and visitors are first taken through a maze of narrow, pillared corridors, stone sculpture galleries, and a museum before reaching the catacomb entrance, which is signified by an ominous warning carved into the door lintel:  ‘Arrète!  C’est ici L’empire de la Mort’ (Stop! This is the empire of the dead). 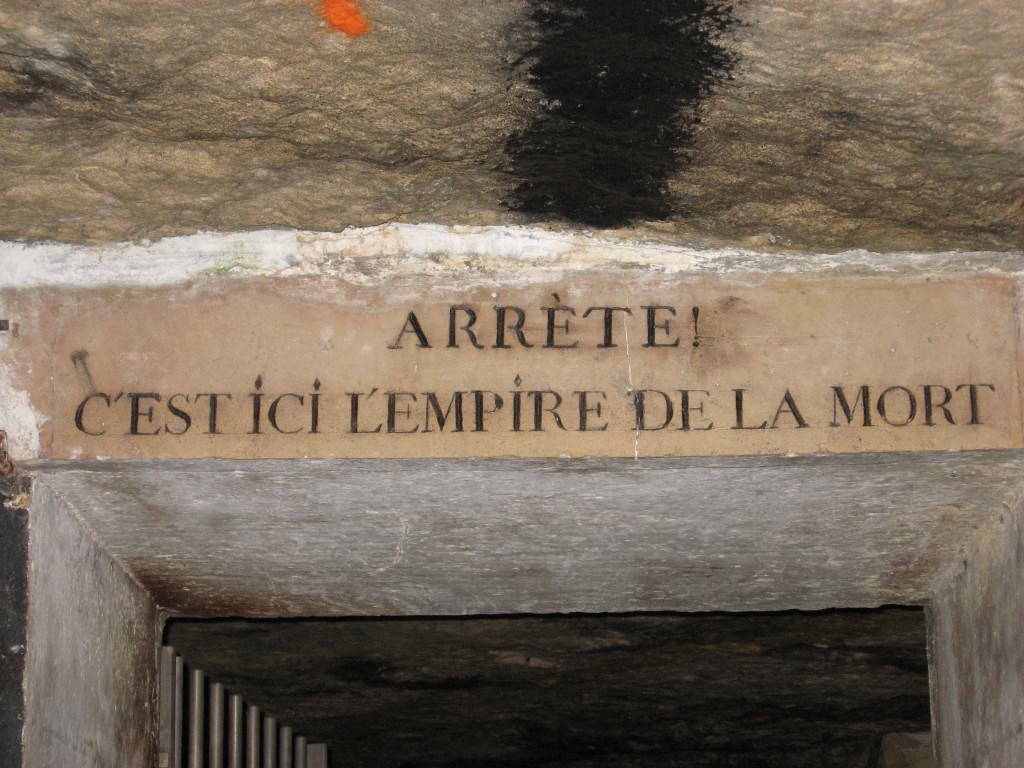 The visual experience of the catacombs is not that chilling.  European travel enthusiasts have likely encountered similar ‘bone-art’ (such as the Kostnice Ossuary in the Czech Republic), saint relics, bone-houses (as in Oppenheim’s Katharinenkirche) or any of the other macabre traditions that adorn churches and attractions across Europe (See our post Europe’s Creepiest Sights for other macabre sights). However, the strong smell of the Paris catacombs is apparently what all the initial signs were warning sensitive visitors about. At best, it could be likened to the dusty, incense-infused scent of old stone churches, but with an underlying malaise that can only be attributed to the contents of multiple cemeteries. It certainly leaves an impression on those who have just left the Parisian pâtisseries. 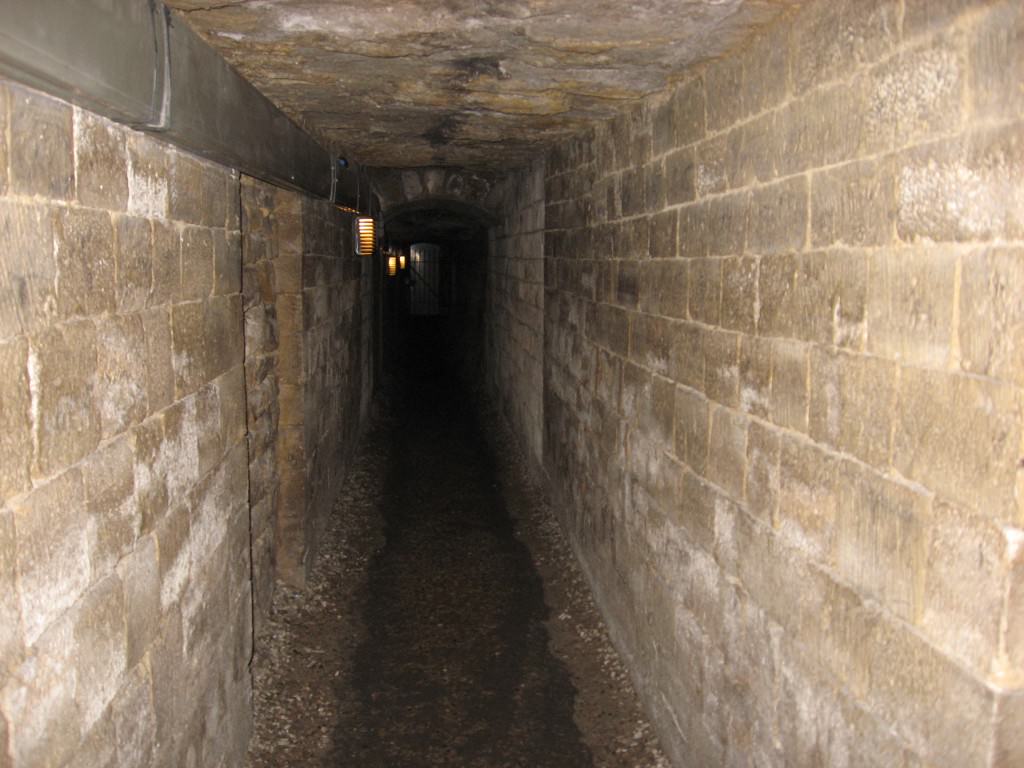 According to the catacomb museum and the official website, at the end of the 18th century Paris contained 200 cemeteries, many dating back to medieval times, which were no longer sufficient to meet the needs of the city. The overcrowded cemeteries were leaching their contents into the Paris water supply, infecting the population with plague, and collapsing into neighboring houses and businesses, which finally prompted an order to transfer all the bodies into the abandoned quarries between Barrière d’Enfer and the Petit Montrouge. The transfer began in the middle of a spring night in 1786 and concluded in 1814. Many notable figures are interred in the catacombs, though most are unidentified, including Colbert, Molière, Danton, Robespierre and other figures of the French Revolution. 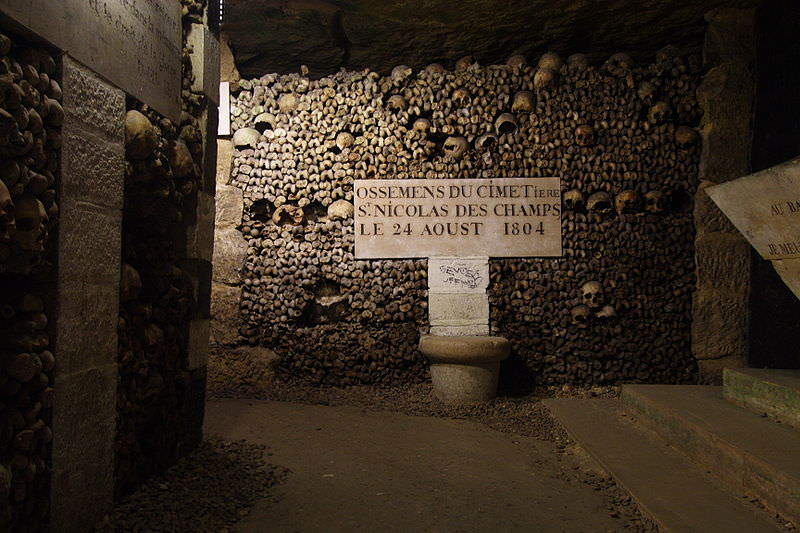 After entering the catacombs, the first thing that strikes the visitor (after the smell) is not so much the quantity of bones, but the symmetry and style of the whole scene. Skulls and bones are piled into towers, crosses, designs, and rows over 6 feet high and at least 5 feet deep on all sides of a tiny path that winds through the tunnels. The jostling tourists, 200 are allowed down at a time, and constricted space caused me to involuntarily knock into the wall of skulls, which covered my head with a rather disconcerting film of bone-dust. However, some visitors were completely unwary about manhandling the bones. I witnessed one young man stick his tongue inside the gaping mouth of a skull, while his friends took a photo and commented that it would look hilarious on Facebook. The notion of ‘respect for the dead’ did seem a bit lost on this particular crowd. 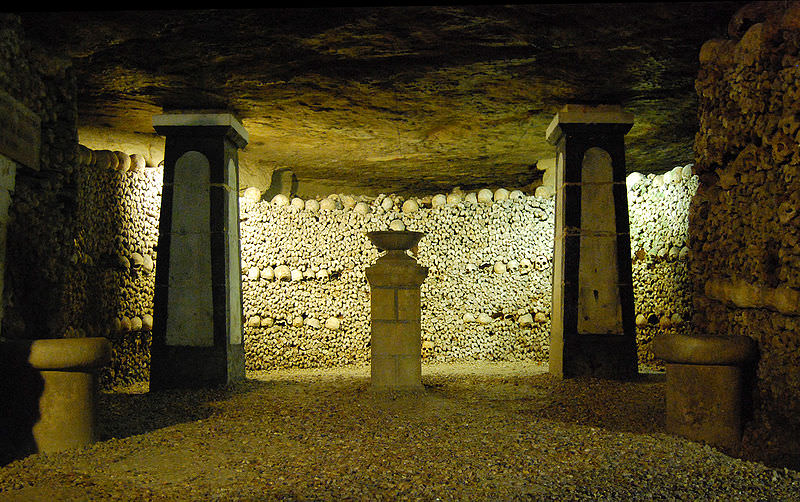 There are no security guards in the catacombs, no roped-off areas, and no ‘Don’t Touch’ signs. Perhaps this sudden lack of rules for tourists, who are accustomed to being roped and corralled, inspired some individuals with a misguided sense of freedom. The catacombs have also been broken into by marauding party-goers (evidenced by discarded beer cans and cigarette ends) as well as used for unauthorized cult rituals and eccentric services. The raucous visitors hollering down the corridors and knocking others into the bone walls, the foul odor (perhaps related more to the overflowing sewers nearby than the long-gone medieval Parisians), and general atmosphere of oddity and foreboding made me think that authorities may be wise to just seal off the catacomb entrance. On the other hand, what I perceive as irreverence could just be a by-product of the Parisian ‘joie de vivre’ quality, which wastes no time worrying about death. 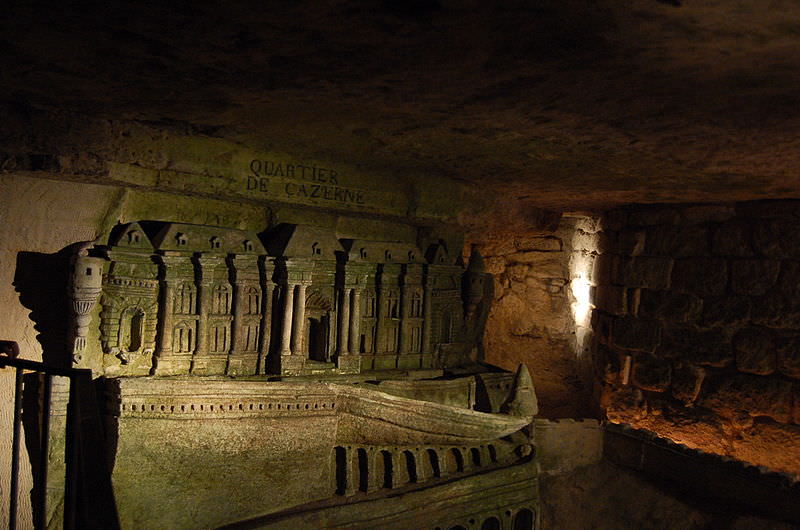 There really is only so much time one can enjoyably spend romping through a mass grave, so a quick trip up another winding stairwell deposits you back into bright daylight. The catacombs exit is in a non-descript residential alley next to a gift shop, where the morbidly-inclined can purchase skull-art for their nearest and dearest or enjoy freshly baked pastries (skull-shaped, of course).

During my visit, there was a lot of unnecessary noise and irreverence from the crowds, which created a loud, spectacle atmosphere and an uncomfortable sense of desecration. At less busy times, it must be a solemn, thought-provoking place, which provides an interesting juxtaposition to the beautiful, bustling city above. For adventurous visitors looking for a unique experience, a bit of history, and a touch of the eccentric, definitely take an hour or two to explore the Parisian catacombs.

And remember to book skip-the-line-tickets in advance.

I just went to the catacombs today, and it was a very different experience. There were signs that said that flash isn't allowed and that they should not touch the bones. Of course, people did the opposite, but were not as rambunctious as you described. Overall, they were respectful. Things can change in a year, or maybe it was a different day of the week.

i was there in the early 90's and i was alone. after entering i met 3 persons and they walked very fast so i lost sight of them. after that it was just me and miles of bones. after 20 min. i was ready to leave, my feet were white with bone dust. it took another 15 min. to reach the exit and i was glad tol leave the dead to their own realm. it was very impressive to see thoug.

is it ok for a single woman to visit?  what time of week and time of day is best?

Sounds like fun.  When is the best time of week and time of day to visit?  Is it ok for a single woman to go?  I mean I would' nt go sight seeing in the underground of NYC where I'm from.

I've gone through the catacombs twice and did not witness the roughhousing you describe.  I suppose it depends on who is there the same time you are.  The catacombs are certainly worth a visit.