Aix en Provence, a beautiful old Roman town, was built on the ruins of Entremont in the year 122 B.C. The area had hot and cold springs and was thus named Aquae Sextiae. In the Middle Ages, after it was abandoned by the Romans, Aix became the center of trade in the region and the home of the Sovereign Counts of Provence. Today, with a population of 137,000 (including 40,000 university students), Aix is a lively, vibrant cultural center from which travelers can explore all of Provence. This ancient city was also the birthplace of its most famous citizen, Paul Cézanne. 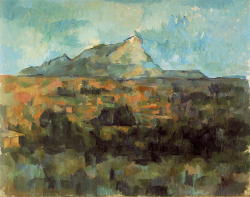 Cézanne was born in Aix-en-Provence on Jan. 19, 1839. He lived there until 1861 when he joined his friend Emile Zola in Paris to practice his art. He stayed in Paris with little success selling his paintings and no acclaim until he entered a new phase in the 1870s, when he became more successful. By 1880, he returned to Aix en Provence, set up a studio and stayed until his death in 1906. During this time, he painted some of his most famous canvasses. It can be said that Cézanne formed the bridge between late 19th century Impressionism and the early 20th century’s new endeavor, Cubism.

Aix en Provence has marked out a wonderful walking tour called “In the footsteps of Cézanne” that will take you through the places in Aix that are associated with the artist’s life and work.

Cézanne’s Workshop (Atelier des Lauves)
Here, you can see the workshop as it was during Cézanne’s time. The Cézanne bookshop holds a wide range of products related to the artist. In July and August visitors are invited to a special night visit where they can see a sound and light show in the garden of Cézanne’s studio.
9 Ave Paul Cézanne

Musee Granet
One of the best regional museums in France, the Musee Granet has been recently renovated. It has a Paul Cézanne room that holds nine paintings depicting Aix en Provence as well as paintings from the artists who visited him in his Atelier des Lauves studio.
Place Saint Jean de Malte
13100 Aix-en-Provence
For those who can travel outside the city, “The Cézanne Road” will take you to the places where the artist set up his easel to paint his beloved St. Victoire.

Jas de Bouffan Family Property
When Paul Cézanne was 20 years old, his father acquired the Jas de Bouffan Estate. The estate was the center of the artist’s world for years. He painted some of the walls in the house with religious works and and a series of portraits, using some of the estate’s farmers as models.  Cézanne also began painting outdoors in the open air, producing his first Sainte-Victoire mountain from the garden. 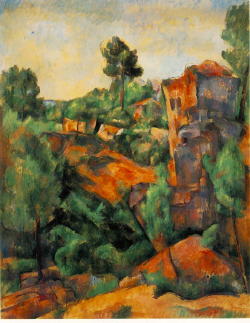 In 1897, Cézanne began to paint the stone reserves of the town in the Bibemus Quarries. He was struck by the contrasting geometric shapes of the rock, its luminous ochre color and the nearby vegetation. His angular painting predate the cubist period to follow. His work at the quarries was an inspiration to Braque, Picasso, Matisse, Kandinsky and Mondrian.