Deep in the countryside of Emilia-Romagna, a provence in northern Italy, sits the medieval village of Brisighella. To say that it is tucked away would be a lie: the village center sits at the base of three rocky crags, each topped by a structure: a church, a castle, a clock tower. They guard the village, their silhouettes visible from around the Lamone River valley.

But Brisighella feels like a secret, and maybe it is because of its location: 40 miles to the south of Bologna and 48 from Florence, dwarfed by both the neighboring town of Faenza and the nearby coastal city of Ravenna. It’s in the middle of everything and yet off the tourists maps, and this makes Brisighella the perfect destination for any traveler exploring the north of Italy – especially in winter. 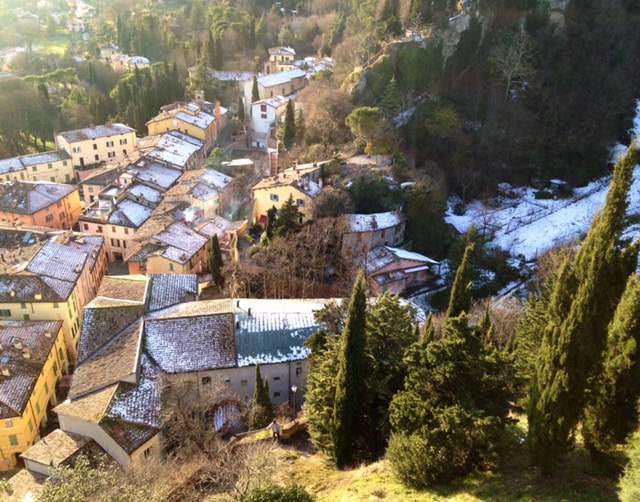 I was here on a cold day in late December- just after Christmas and just after a quick, unexpected snow squall. But this combination made my arrival in Brisighella feel a little magical, with a light dusting of snow covering the rooftops of the village and strings of Christmas lights still lingering in the squares. My guide for the day was an Italian friend who hailed from the nearby town of Faenza- known for its ceramics- and the drive to Brisighella was a quick 15 minutes down one long, winding road. I loved having my own chauffeur, but Brisighella is easily accessible by the rail network as well-  the Faentina, the Florence-Faenza railway, makes the scenic ride several times a day. 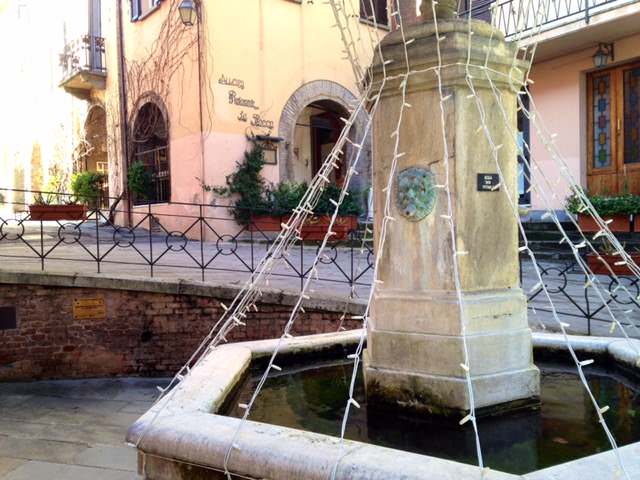 I could see the village appear from the distance, the circular tower of the castle growing larger as we approached. “These are chalk hills,” my friend said, as he pointed towards the selenite cliffs that loomed over the village. He was right, of course; the town is set against a chalk hill and some of the ancient defensive walls and stairways of the old town center are still carved into the gypsum rock at the base of the hill. In fact, there is an entire row of houses built into the rock, and this is where we found the famous Via degli Asini, a raised, covered passageway. “The Street of the Asses?” I asked my friend, confused and delighted. Built in the 12th and 13th centuries as a defensive walkway, it later served to protect donkeys as they carried chalk to and from the quarries. The Donkey’s Alley remains as a unique and famous feature- no longer used by donkeys, but now a public walkway that provides a bird’s eye view of the village. 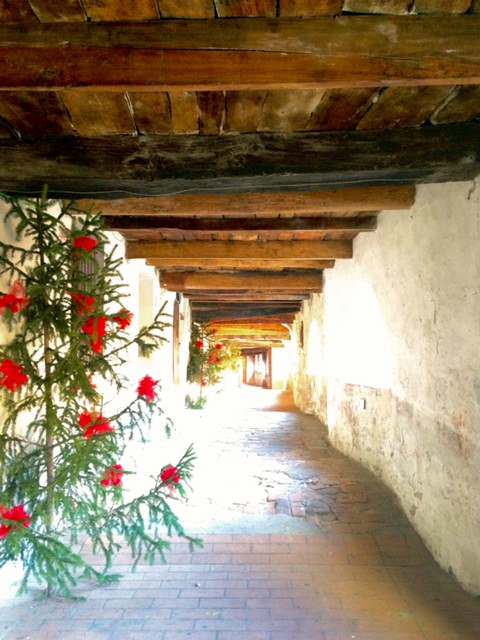 After a stroll down the alleyway I was anxious to climb one of the hills- up to either the clock tower or the castle. But before any walking, I needed coffee. During my week in northern Italy, I’d vowed to act as the Italians do, and so I ordered a double espresso at every opportunity. I’d recommend this at any time of the year but especially during the winter: the bracing wind was easier to handle if I could fortify myself with a hot shot of espresso every hour or so.

With the caffeine pumping through my bloodstream, I was ready to tackle the hills. We set out to the clock tower and climbed a sometimes steep and often winding path, past cypress trees and above the village rooftops. The clock tower- Torre dell’Orologio- is a slim structure that was built in 1290 and restored in 1850, ringing on the quarter hour all day (and night) long. Inside the tower is the Museum of Time, and outside is a panoramic view of the village and the surrounding countryside. I rested my arms against a stone wall and gazed down at the snow covered village, and then out across the gorge to the La Rocca, the castle. Built in 1310 and reworked 200 years later when it was conquered by the Venetians, the structure has many of the typical characteristics of a medieval fortress. 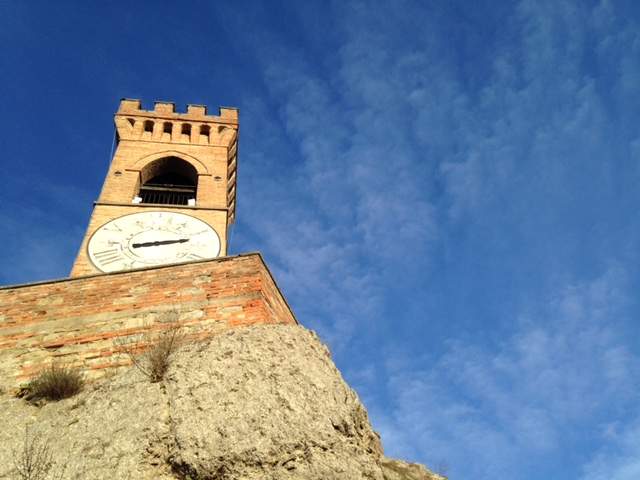 I thought about trekking out to the castle and exploring, but the cold air and my stomach directed me otherwise. Back down to the winding streets of the village center, through Piazza Carducci- the main square- and into the small and warm dining area of Framboise. I didn’t bat an eye at the limited menu, because every pasta dish was made fresh in the back kitchen, and ingredients were locally sourced. This wasn’t a fancy place: rickety wooden chairs were tucked against tables covered by green and white checkered table clothes, and bright red Christmas ornaments hung from every available space. But I melted a little with every bite of my meal, and maybe it’s cliché but I have to say it anyway: it was the best pasta I’d ever had in my life. Cappelletti is a traditional northern Italian Christmas dish, plump “little hats” of meat filled pasta served in a rich broth and with a delicate taste that I’ve been dreaming about ever since. 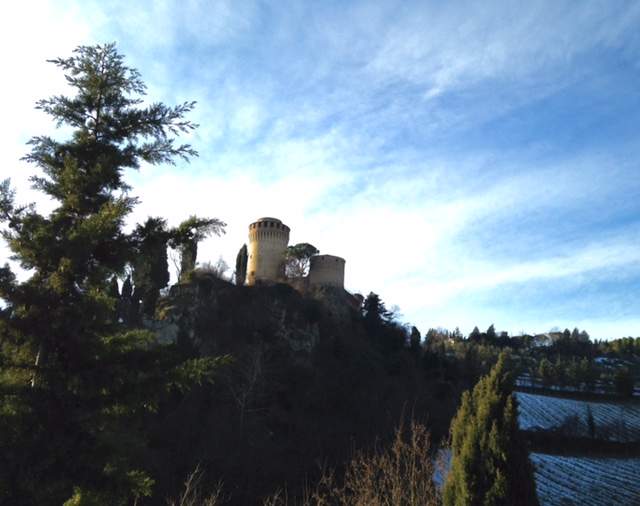 I took a bite of pasta and then a sip of wine and I sat back in my chair. Outside I could see a twinkle of white lights still strung over the doorways of shops and restaurants, and people passed by, bundled in quilted coats and thick scarves. I finished my wine and then ordered an espresso- because, after all, there was still a maze of streets to explore, shops to pop into, and other hills to climb in what was quickly becoming my favorite Italian village.

Sampling the olive oil. Because Brisighella sits at a low altitude and is sheltered from cold winds by both the valley and the chalk hills, it has a history of olive oil cultivation that stretches back to ancient times. With a D.O.P. status (Protected Designation of Origin), and a unique, high-quality taste, bringing home a bottle of this distinct olive oil is a must.

Taste and purchase olive oil at the Cooperativa-
Via Strada 2, just outside of the village.
Hours: Open daily except Monday mornings and Thursday afternoons.
Tel: +39 0546 81103 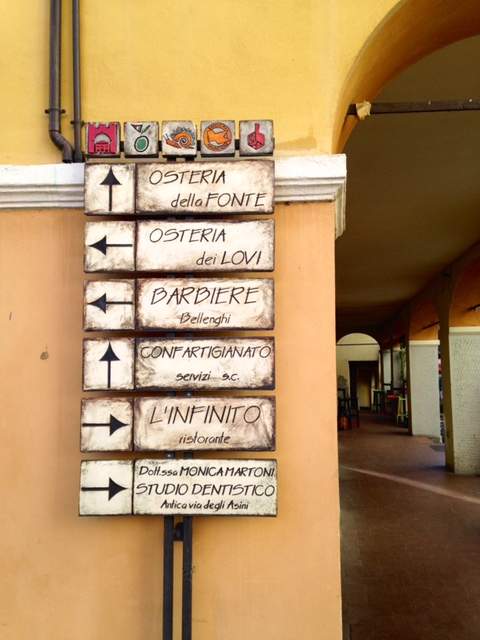 Where to Eat in Brisighella

Enjoy a dish of fresh pasta and reasonably priced wine at Framboise, a small, cosy restaurant on the main street of Brisighella.
Via Porta Fiorentina 16
Tel: +32 9074 0862

Written by and photos by Guest Contributor Nadine Karel for EuropeUpClose.com . Nadine Karel is a school counselor in the suburbs of Philadelphia. She likes to spend her summer breaks trekking across Spain, hunting down the best baguettes in Paris, and throwing back double espressos in Italy. You can read more of her travel tales at SingleStepCamino

It's always amazing how many interesting little towns there are in Italy, always something to discover. Love the donkey's alley!