Sometimes it’s where you stay that makes traveling so memorable. I often remember more about my hotel or resort than I do about my actual destination. And this is especially true of my stay at Ruthin Castle, an ancient luxury hotel on a brilliant green Welsh hilltop, overlooking a delightful, tiny stone village. 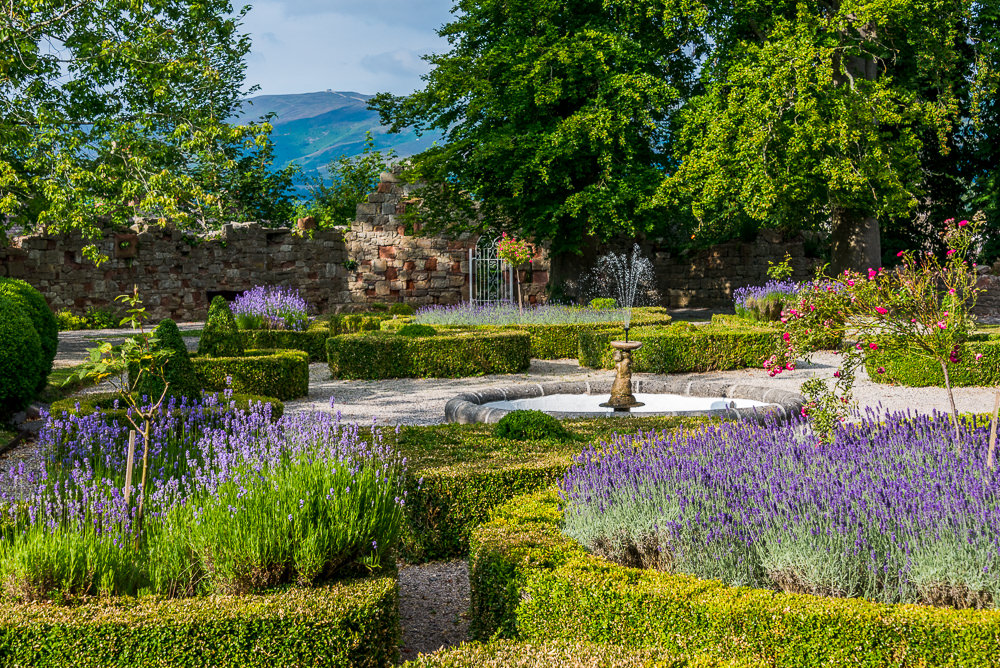 The Ruthin castle grounds, designed for serenity and contemplation

There’s something relaxing and inspiring about staying in a castle where peacocks strut below your window, sheep graze and bleat in the nearby meadow, and where royalty once laid their heads. 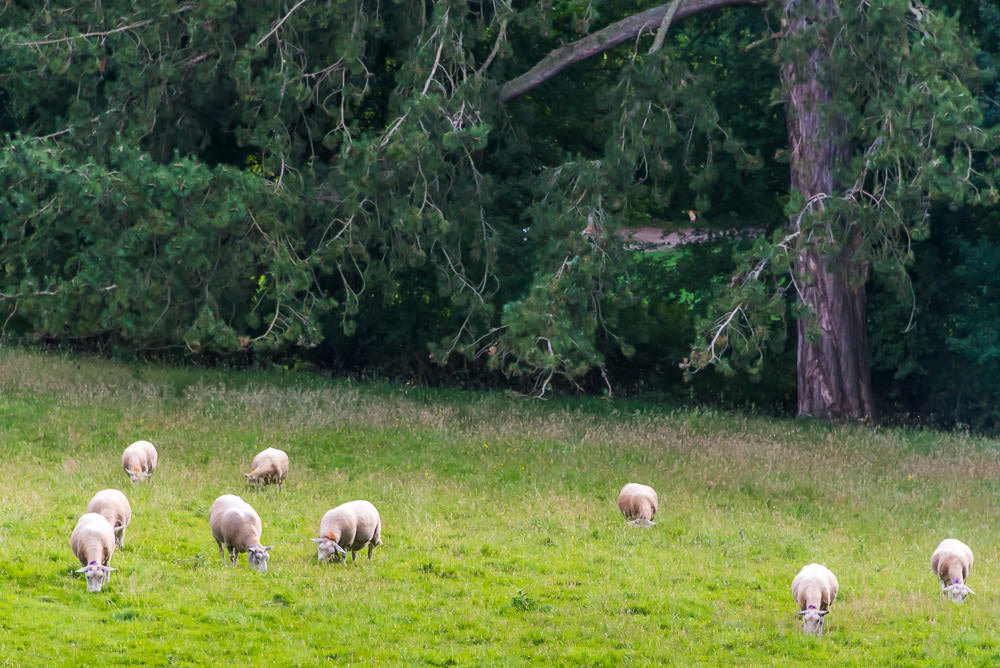 Sheep graze and bleat in the nearby meadow

The story of Ruthin castle spans centuries. It’s an epic of treachery and betrayal, and of days of glory and gradual decline and decay. Not to mention civil war, siege, and romantic intrigue. Perhaps rhapsodizing about a castle in Wales—where ancient stone ruins are strewn across the landscape like rice at a wedding—may seem clichéd, but Ruthin Castle really is the sort of place where romantic old stone ruins beg to tell their stories. What, then, is so memorable about this castle?

Ruthin Castle’s history is a great place to start. Its very existence springs from a dramatic legacy that has twisted and turned in the winds of fate for centuries.Over the ages the castle has changed hands—as so many have—with the fortunes of the owners, as you will soon see . . .

Treachery lurked behind the castle walls since its first days when it was known as The Red Castle in the Great Marsh. Dating from 1277, with deep red sandstone walls—the castle was given to Dafydd ap Gruffydd by King Edward I of England. This gift was for his help during the King’s invasion of North Wales when Dafydd betrayed his fellow Welshmen.

Then, in a deadly karmic reversal, Reginald de Grey betrayed Dafydd ap Gruffyd, resulting in the castle being deeded to de Grey by Edward I in 1282. De Grey’s family was to remain here until 1508. The castle then passed to Henry VII and hence to Henry VIII and on to Edward VI. Lady Jane Grey inherited the castle for a brief time until she was executed under the pretext of high treason. Mary I then inherited the castle, passing it on down the royal line to Elizabeth I, James I, and finally Charles I. 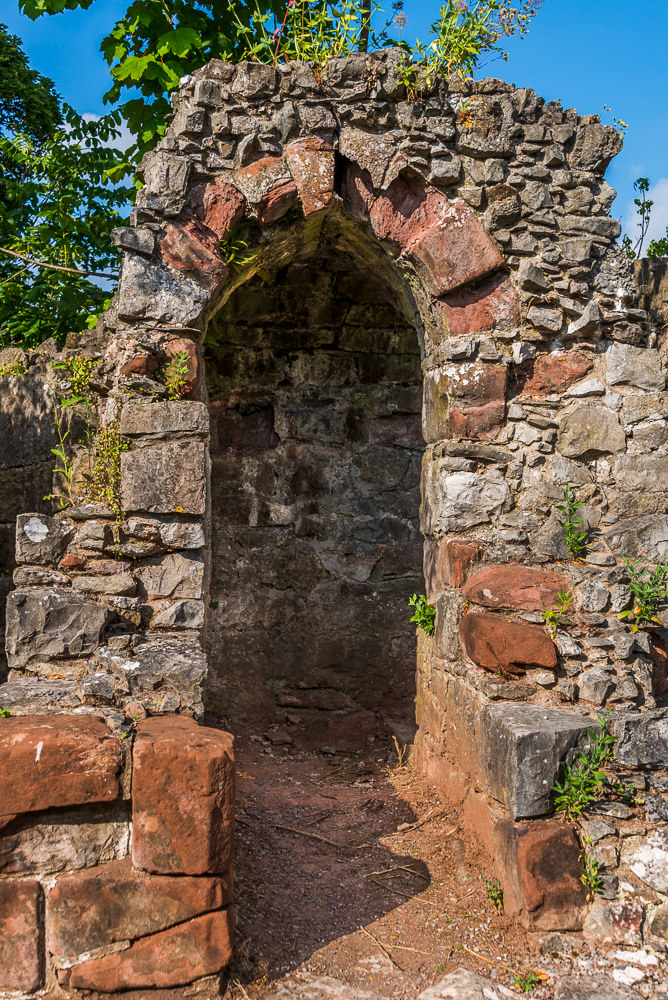 Back then, the castle boasted a pentagon-shaped Upper Bailey 350ft long and 250ft wide. It had six round towers and walls 7-9 feet thick. The Lower Bailey, which was an entry courtyard into the Upper Bailey, had a drum tower at each corner, and its own gate, complete with portcullis. With a sally port between the two baileys, this castle was designed for siege war.

By 1632, the castle and estate had decayed so badly it was valued at the princely sum of 5 pounds. Local records state it was cheaper to mine stone from the local quarry than to break down the castle for its stone. Sir Thomas Myddleton of Chirk purchased the castle for a song. But then, in 1642 during the English Civil War, the castle was repaired and garrisoned against the parliamentarians. In 1646, the parliamentarians held the castle under siege for 11 weeks, when it suffered badly from artillery bombardments. The castle was partially dismantled in 1648 by Cromwell’s forces to prevent it from being used as a future royalist military stronghold. Its ancient walls were torn down and the timber and stone carted away, some being used to build houses in the village below.

In 1826 Maria Myddelton inherited the castle. She had a fine new stone castle mansion resurrected on the southeastern quarter of the old castle grounds. From 1849-52, the Myddletons rebuilt and extended the mansion, the three-storey castellated red sandstone building—complete with an octagonal corner tower—that is today’s luxury hotel. Maria also added the formal gardens that grace the estate today. 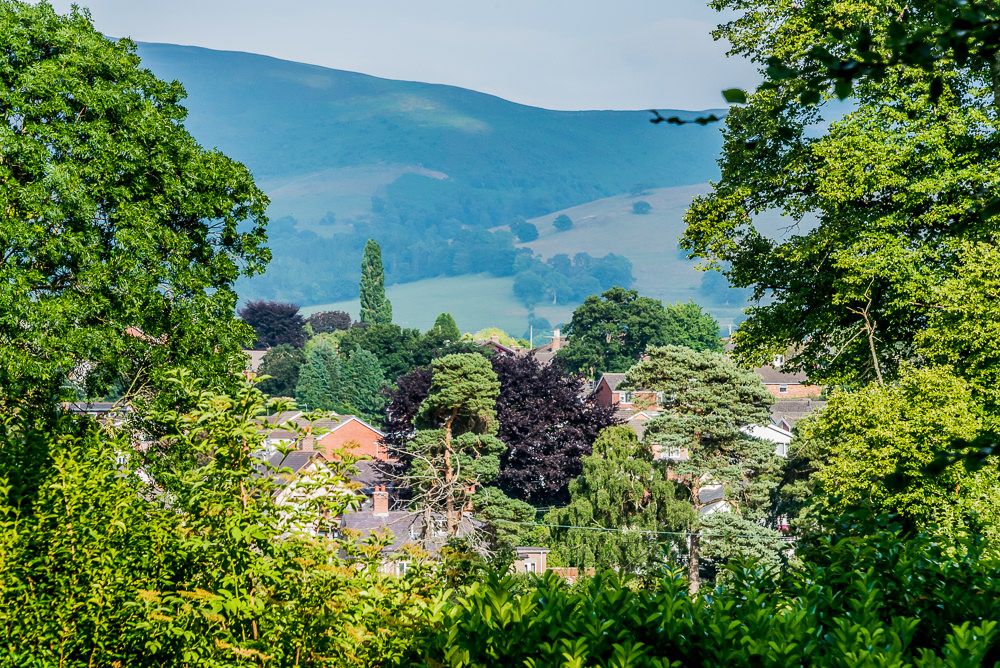 From the castle grounds, you can see views of the village rooftops

Of course, no castle history would be complete without mention of scandal. And Ruthin Castle had its share of high naughtiness. Its most notable outrage took place when Colonel Cornwallis-West took a beautiful 16-year- old named Patsy as his wife, in 1902. Flirtatious Patsy was “full of the joys of life” as her biographers delicately put it, and she entertained the very height of Edwardian society in the castle, some with more intensity than others.

Enter Edward, Prince of Wales, the future King Edward VII. The prince, apparently, could not resist Patsy’s charms and the amorous couple proceeded to have a rather lengthy affair under the Colonel’s very nose. (Or the Colonel may have simply ignored their trysts and soldiered on, hoping for some form of titular recompense from the future King!)

Today, Ruthin Castle Hotel revels in this rich heritage. The 54 rooms are appropriately named the Prince of Wales Suite, the extravagantly themed Castle Suites, and the Castle Deluxe and Castle Luxury Suites. 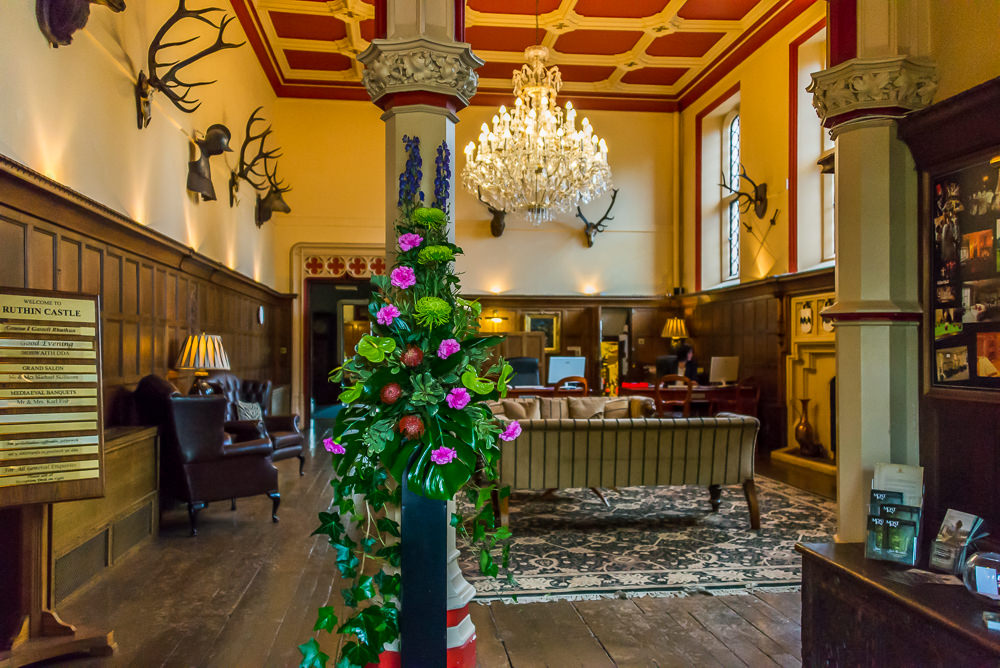 The lobby at the Ruthin Castle entrance

Guests can enjoy fine dining at the flamboyant Bertie’s Restaurant or relax in the more casual Library Bar or Cornwallis Lounge. And Ruthin Castle’s indulgent Afternoon Tea is a superb array of finger sandwiches, cakes, delicacies, and perfectly steeped tea. 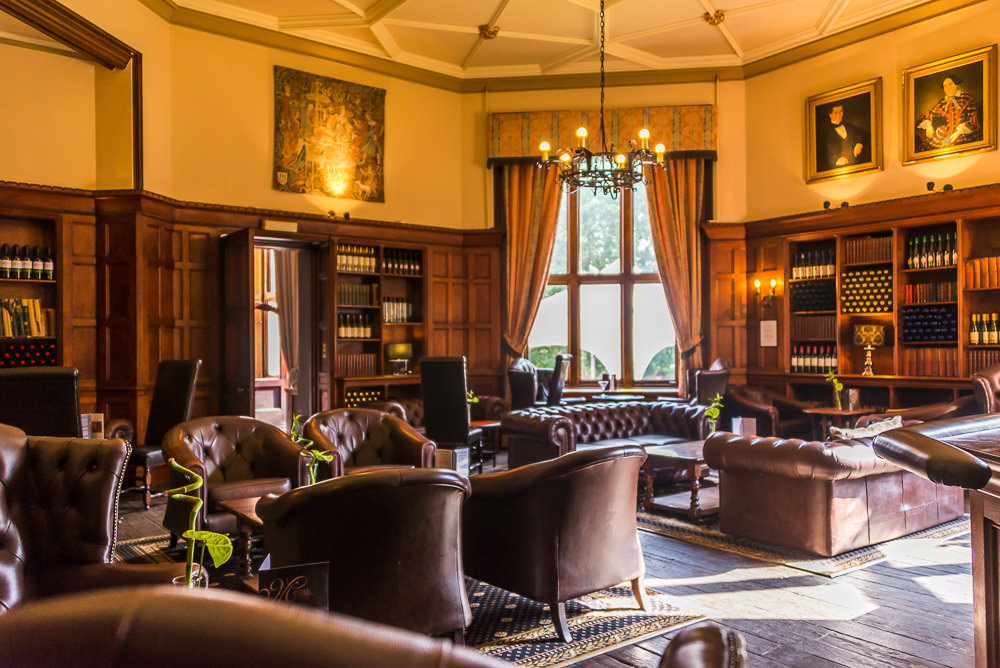 The castle owners, Anthony and Amanda Saint Claire, also enjoy hosting medieval feasts and serving banquets of regional Welsh dishes. The Castle’s reputation as a romantic wedding destination was proven by the tuxedoed shindig held while we were guests there. The wedding was for an English/Welsh couple that lived not far over the border, so the Welsh and English guests provided an interesting mix of accents!

A Tour of the Castle

You enter the hotel’s distinctive main entrance via the tall red sandstone castle mansion. One of the high towers has been converted into a clock tower. The castle’s hallways and lounges are regally outfitted like a baronial mansion. It’s not hard to imagine past owners and their guests sipping their sherry here after a hard day of grouse hunting on the estate. 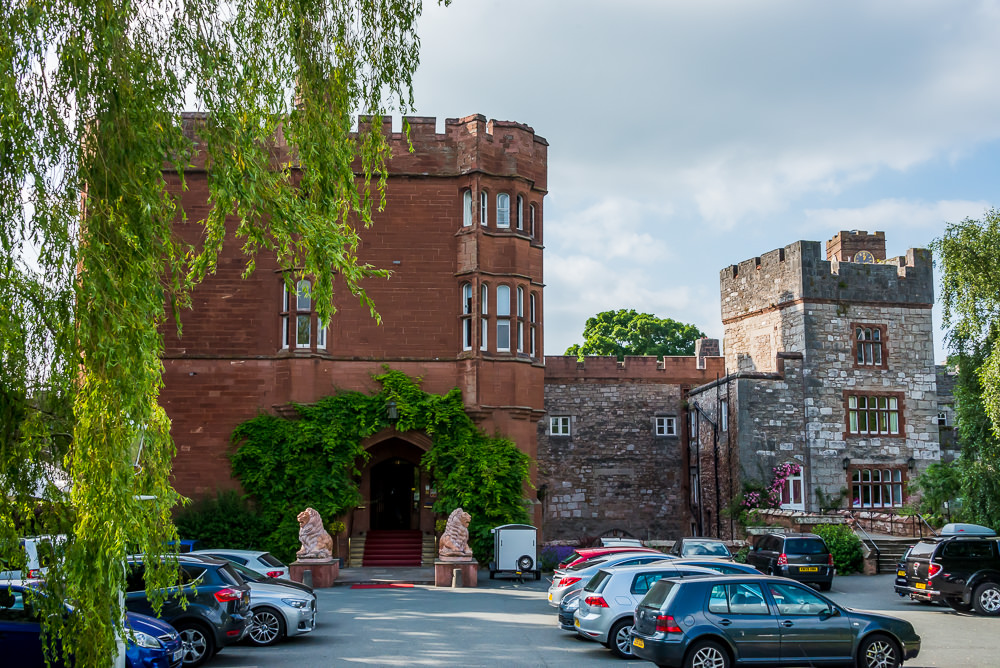 Outside, as you stroll around the manicured grounds, vestiges of the old castle’s ruins spring up from small copses of brush and vines. The mix of roughly hewn red and white sandstone blocks reminds us of the castle’s turbulent history. Small, decorated sections of the old castle wall merge with the beautiful gardens. White gravel pathways meander through the castle grounds, separating circular arrangements of brightly colored flowers and purple lavender blooms. Behind the castle, a trestle bridge stands across what was once the castle moat. Who knows what artifacts are buried deep in the ground here? 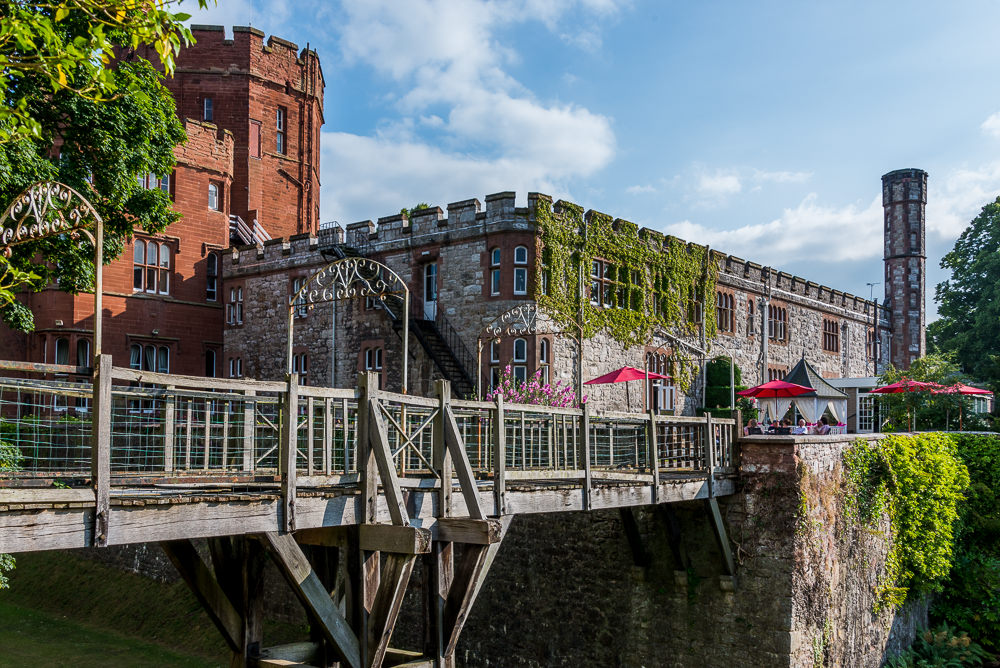 A trestle bridge is located behind the castle

The castle’s picturesque gatehouse juts out over the roadway that leads out of town. Opening directly into the small hamlet of Ruthin, the gatehouse entrance is a photographer’s dream. Partially covered with a thick cloak of ivy, the stone ramparts feature red sandstone trim, a red sandstone arch, archer’s slits, and a classic rustic tower. 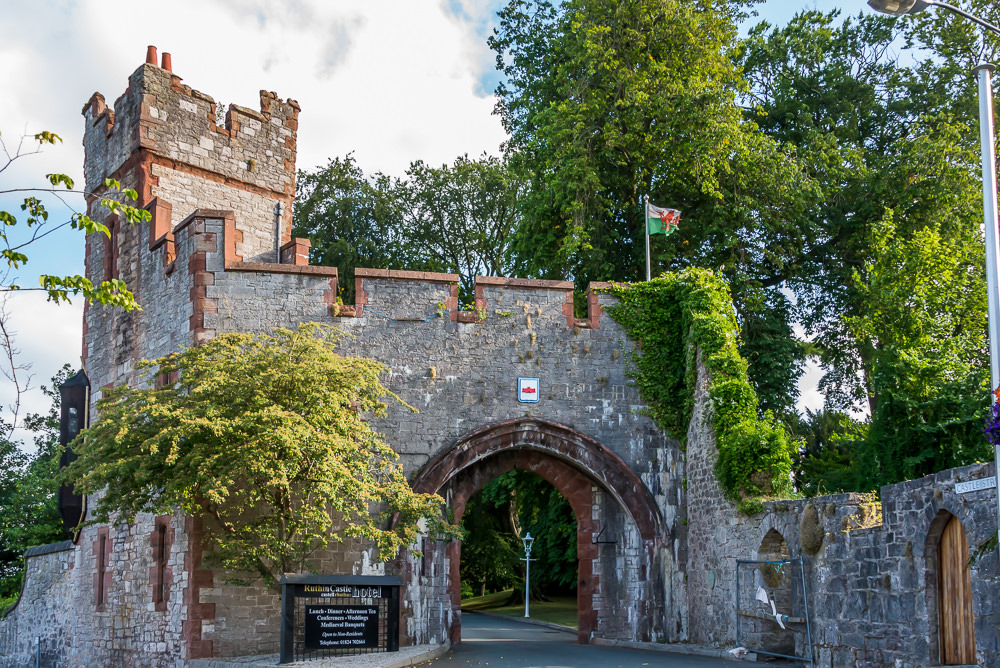 A Stroll through Ruthin Village

Resting at the foot of the Clwydian Range, in Denbighshire County, the small town of Ruthin (population 5,218) has a classic rural feel to it. The town’s history has always been inextricably intertwined with the castle. It’s a perfect town to stroll through at your leisure, popping in to the small shops for those little knick-knacks you won’t find in the big cities. 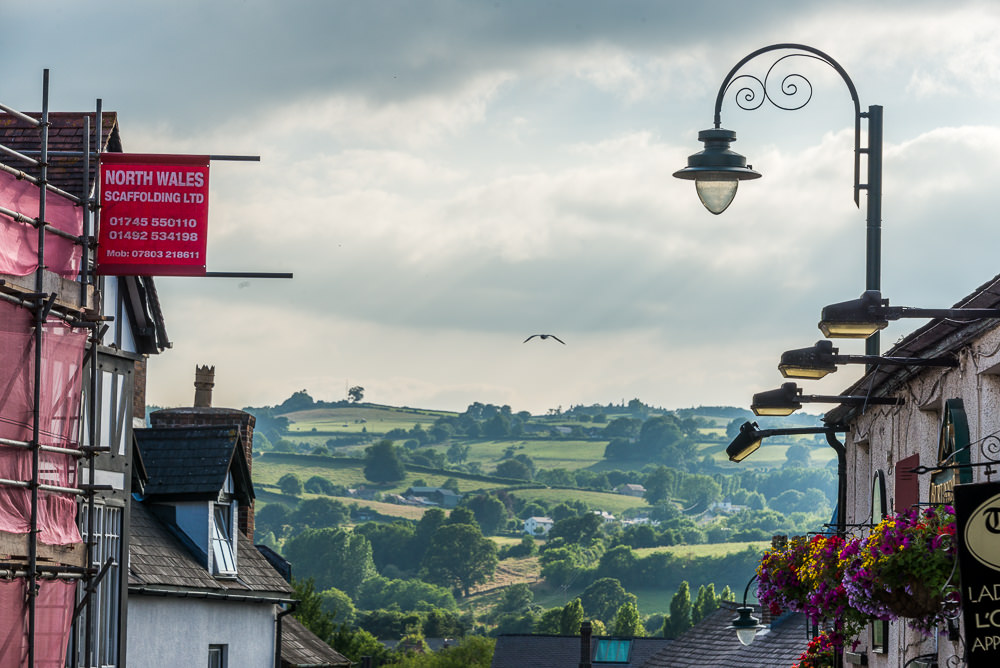 The small town of Ruthin

With my baggage valiantly fighting to return to its master from Naples via Manchester Airport, and no clothing to speak of apart from the ones on my back, I had great fun outfitting myself with some beautifully cut English shirts and pants from one little village clothing shop.

The village’s St. Peter’s Square is not quite of the dimensions of its Vatican namesake. Nevertheless, it’s a lovely and lively little square in the center of the village with a sizeable clock tower in the center. The red brick façade of the Myddelton Arms pub and Castle Hotel on one side and St. Peter’s Church nearby make an entrancing place for people watching. 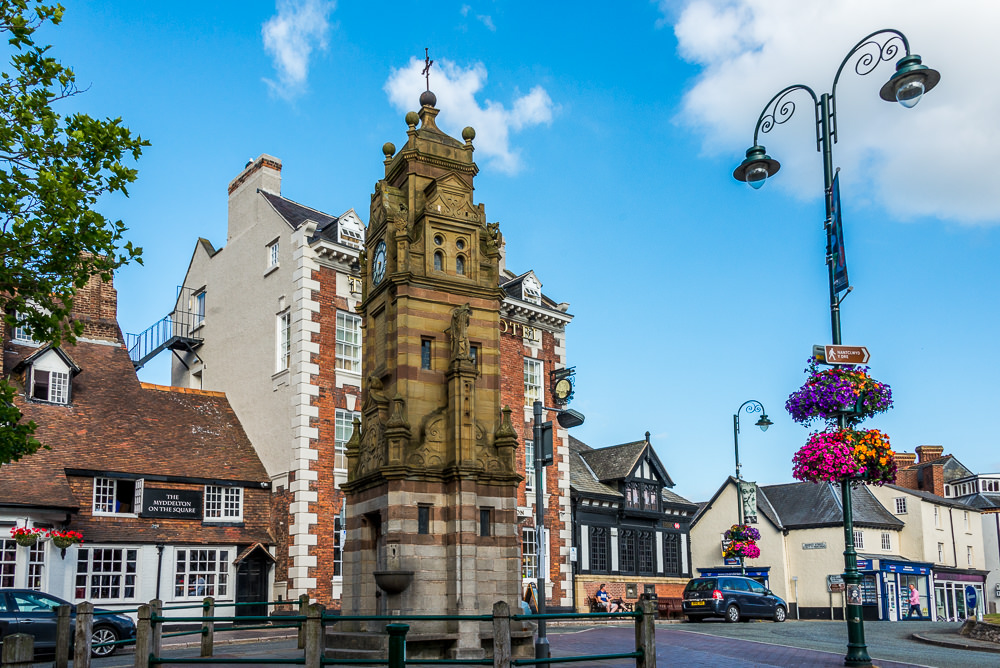 St Peters Square in the center of the village 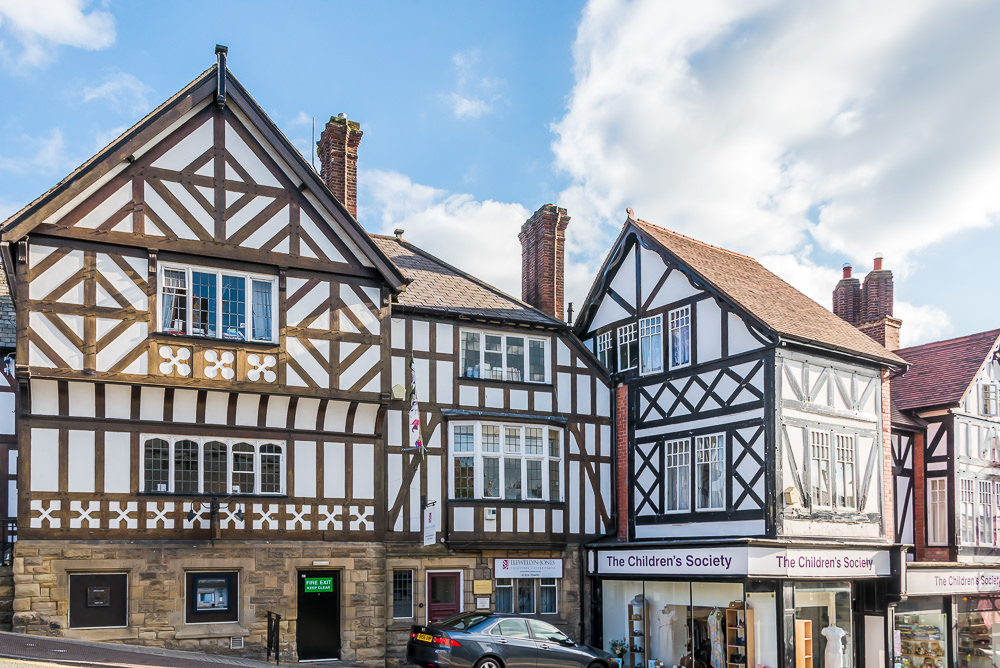 In 1891 there were 31 pubs in this small town. They lay in wait for thirsty shepherd who stopped in to wet their whistle on the drover’s run from Wales to England. And today you can still drop in at one of the remaining 11 pubs and try to decipher the thick Welsh brogue of the locals. These are country people, good folks all, and once you’ve been introduced you might find a pint sliding down the bar from the townies. Or you might be moved to slide one up the bar while they tell you some stories, both tall and true, about the town and the castle. And as the beer goes down and the afternoon wears on, the stories become more and more embellished. 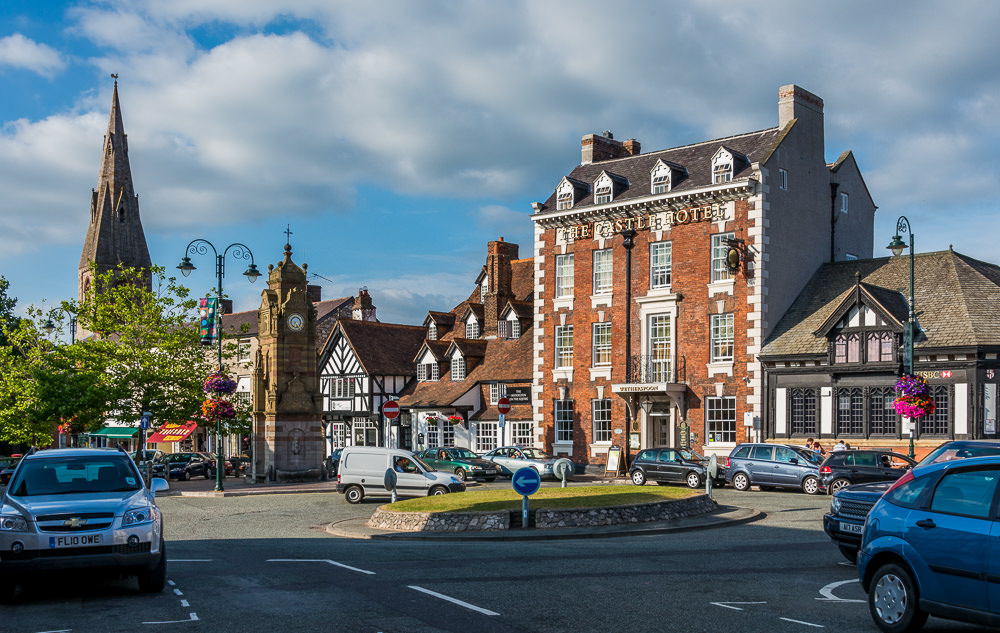 The red brick façade of the Myddelton Arms pub and Castle Hotel on one side and St. Peter’s Church nearby make an entrancing place for people watching

The people here are friendly and welcoming, and the castle hotel delivers atmospheric rooms and fine dining with an understated elegance befitting its marvelous past. It may well be one of the finest hotels in all of Wales. Ruthin Castle and the township make a memorable stay.

Don't make the same mistake I did, though! The Castle Hotel, Ruthin and the Ruthin Castle Hotel are NOT one and the same place!

Saving this so that I can visit and stay, perhaps next year.