10 Travel Books that take your heart to Europe

Choosing the best travel books that take your heart to Europe is not an easy task. Some of the most inspiring manuscripts that capture the spirit of the old continent are not available in English. And yet, authors around the world write volumes about this part of our blue planet and their imagination is often the magic wand that inspires the journey. Here are 10 great travel books that take place in Europe and will inspire your next trip to the continent. 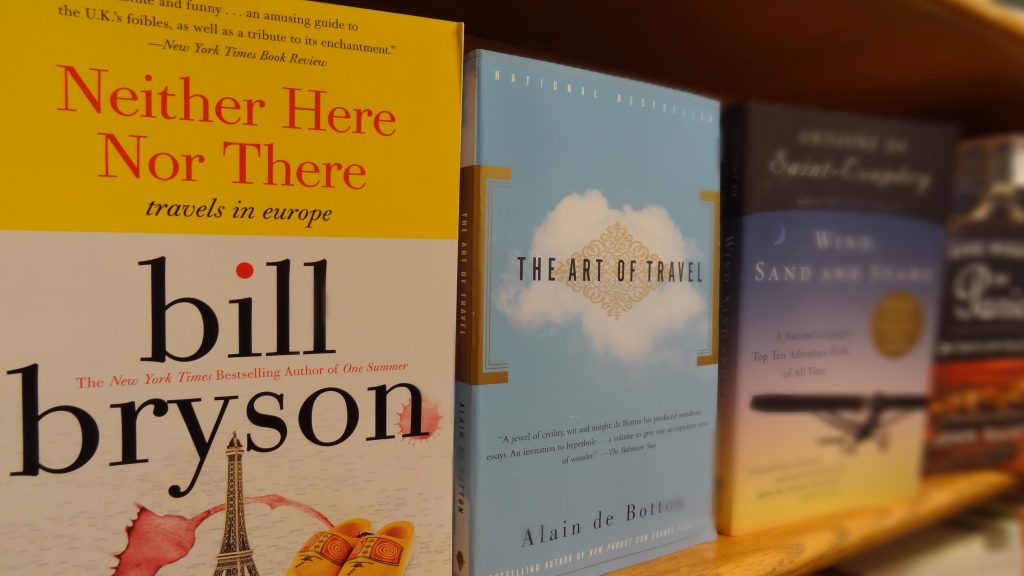 The Road to Little Dribbling by Bill Bryson

The Road to Little Dribbling by Bill Bryson relates the tale of an American from Iowa who is both frustrated and fascinated by Lancashire, Yorkshire, and other alluring British destinations. From Cornish fishing villages to more touristy spots, the author relates his trips with flair and humor: here a country pub where everybody knows your name, there a sanatorium turned residential complex, and in-between a whole cast of heritage sites and countryside treasures.

The Sun Also Rises by Ernest Hemingway is one of those iconic travel books that take your heart to Europe – this time from Paris in France, to Pamplona in Spain, for the July fiesta, which culminates with a bull fight. It’s a literary gem in Hemingway’s iconic style, and it relates the travels and love story of U.S. journalist Jake Barnes and British Lady Brett Ashley.

Watermark by Joseph Brodsky is a poetic masterpiece that paints Venice with the brushes of a thousand poets. Suddenly, carnivals and postcard images become obsolete as you live and breathe the rhythm of a real, vibrant city, destroyed by the tourist hype. Brodsky’s Venice is at its best off-season when the peace of the streets reverberates the bang of the church bells like a symphony.

Zorba the Greek by Nikos Kazantzakis

When it comes to “philoxenia” (love of strangers), there’s no place like Crete, the birthplace of Zeus. Zorba the Greek by Nikos Kazantzakis contributed significantly to tourism growth after the 1960s, even more than the famous Cretan diet – which on Crete is frowned upon by many, because Cretans love meat more than they love veggies, fish, and legumes. Granted, I spent more than three months on the island, and I have never encountered a cow, but the goats are omnipresent: they lure from the branches of an olive tree, which stretches its shadow over a winding mountain road, they explore the shores of the Cretan Sea, or they appear out of nowhere when your drive against the clock, just to slow you down. They also show up as metaphors and witty literary license comparisons in Zorba the Greek.

A Year in Provence by Peter Mayle

If you are anything like Peter Mayle, you will love spending A Year in Provence. This is one of the 10 travel books that take your heart to Europe I love the most because it is so close to home. Granted, I’d drive more than 8 hours to Lubéron, but Marseille, which is the capital of the Bouches-du-Rhône in Provence, is just a stone’s throw away from Mayle’s 200-year-old stone farmhouse that is the setting of this fascinating story. The area has not changed much since the novel had its first edition in 1989: goats still roam freely on the main streets of the village, and ladder snakes are right at home.

Postcards from Europe by Rick Steves

Beyond the hype, Rick Steves’ Postcards from Europe takes you “from the Netherlands through Germany, Italy, and Switzerland, with a grand Parisian finale,” and it’s the perfect journey. Rick tends to write like a travel guide, but he has a way with words that inspires impromptu voyages: “But it’s the same Europe, as well. Dolphins playfully race Aegean ferries into the sunset. Oslo’s fjord weary fishermen still peddle tins of shrimp from their boats.” In Postcards from Europe, the author shares some of his favorite travel destinations and moments, but they soon become yours.

For a list of all Rick Steves’ Guide Books for your next adventure in Europe.

The Hidden Europe: What Eastern Europeans Can Teach Us by Francis Tapon

Francis Tapon is an intriguing world explorer. His The Hidden Europe: What Eastern Europeans Can Teach Us is one of those rare books that challenge stereotypes albeit from a strongly biased perspective which doesn’t bother at all because the voice of the author is honest and the experience is genuine. This is Tapon’s personal journey and view, so take his tales with the necessary grain of salt.

Under the Tuscan Sun and Bella Tuscany by Frances Mayes

And then, a lifetime or even just a vacation under the Tuscan sun is an inspiring experience – as inspiring as Frances Mayes’ Under the Tuscan Sun: At Home in Italy, a memoir about life, food, and culture and in of Italy’s most sought-after regions. You will also enjoy Bella Tuscany: The Sweet Life in Italy by the same author.

Seeking Sicily: A Cultural Journey Through Myth and Reality in the Heart of the Mediterranean by John Keahey’s

For a book that reveals the fascinating history and paths of Regione Siciliana, you can always count on John Keahey’s Seeking Sicily: A Cultural Journey Through Myth and Reality in the Heart of the Mediterranean.  From tourist spots like La Terra Trema’s trendy Aci Trezza resort to remote destinations, this is a tome that will inspire your thirst for knowledge and wanderlust.

Travels with Epicurus: A Journey to a Greek Island in Search of a Fulfilled Life by Daniel Klein

Finally, Travels with Epicurus: A Journey to a Greek Island in Search of a Fulfilled Life by Daniel Klein is all about Greek lifestyle experiences. The title is self-explanatory, and the read meets the promise. In fact, “fulfilling” is an understatement for life on Hydra, which turns to be anything but the mythological serpentine water monster of Lerna.

Do you have any other favorite travel books that take your heart to Europe? Let us know in the comments!

Written by and photos by Mihaela Lica Butler  for EuropeUpClose.com

3 Beautiful Travel Books that Take You To France

Taschen’s Paris by Angelika Taschen (2008)
Eye candy for Francophiles, this beautiful hardcover volume is full of Dr. Angelika Taschen’s personal Parisian favorites- hotels, boutiques, restaurants, bars, cafés, and more. The photographs make you feel like you’re traveling along with her and her recommendations are accurate and insightful. Consider this “required reading” for your next Parisian adventure.

France (Evergreen Marketing)
This beautiful and informative bi-monthly publication was originally only available in the UK. Lucky for American readers, they have expanded their distribution and a yearly subscription to France in the U.S. costs $32.57 (for 6 issues). Though this is a bit more than I would normally pay for a magazine subscription, it is absolutely worth it. Each issue is packed with oversized glossy images of France, interesting articles on different facets of French culture, and short bios of and interviews with French celebrities and political figures. If you’re in the market to purchase property in France, the real estate listings in the back of each issue will prove useful (or fodder for fantasy).

One Hundred & One Beautiful Small Towns in France (101 Beautiful Small Towns Series) by Simonetta Greggio (2006)
If you like to get away from France’s big city and head out into les provences (the provinces), you’ll enjoy this lovely photography book. One Hundred & One Beautiful Small Towns in France takes you on a pictorial tour through fishing villages in Normandy and Brittany, towns nestled into the Pyrenees, and medieval villages throughout the Provence region. Informative sidebars give insights on local artisanal products, historical tidbits, and must-see views and attractions. This would make a wonderful gift or a nice addition to your coffee table collection

I'll check some of these out:) I have Under the Tuscan Sun and read a few books by Bryson but not the one you mention:)