The beautiful country of Germany holds many treasures for the visitor; here are what I consider the top 10 sights in Germany.

The Alps
If you head south of Munich, you will find some of the most beautiful scenery Germany has to offer. The Alps stretch over most of Southern Bavaria and include breathtakingly beautiful mountain ranges, green pastures, rivers, and picturesque German towns such as Fussen and Garmisch-Partenkirchen. This mountainous region is also home to many of Germany’s castles and a multitude of parks for hiking, biking and camping.

The Baltic Coast
The coast of the Baltic Sea offers a contrasting combination of scenic pleasures from sandy beaches to jagged cliffs. Sleepy coastal towns dot the coastline offering a more relaxed and slower pace of life than in the rest of Germany.
Mecklenberg-Western Pomerania and Schleswig-Holstein 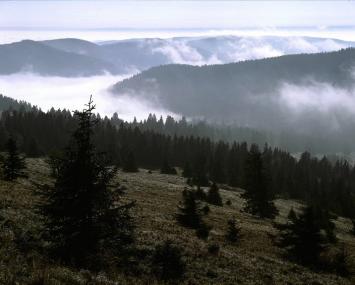 The Black Forest
In keeping with its dark name, this vast forest was feared by ancient Romans and Celts as a haven for ghosts, wild animals and barbarians. The Black Forest is now home to artisans (notably, watch makers and glass blowers), restaurants, and a considerable network of walking paths.
Baden-Württemberg 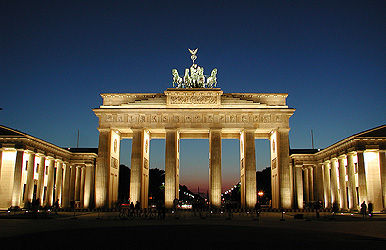 Brandenburg Gate
Built in 1791, the Brandenburg Gate has become a symbol of Berlin’s past and is one of the top places to see in the world. Prussian parades and German armies marched through its threshold. Napoleon marched his troops through its columns before his defeat in Russia. Barricades were erected around the gates when the Berlin Wall was constructed., but in 1989 the Brandenburg Gate was reopened and traffic now passes through it every day. Over the years, it has become a proud monument to German history.

Find the best prices on hotels near the Brandenburg Gate
Berlin 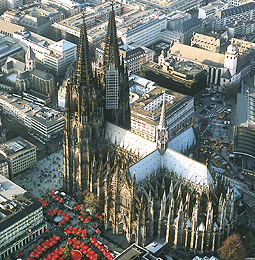 Koln (Cologne) Cathedral
An historical landmark, this massive cathedral towers over the city of Cologne (Koln). The construction of the Cologne Cathedral took place from the 13th through 19th centuries and is a wonderful example of Gothic architecture. Amazingly, the cathedral remained largely undamaged during World War II.

Find the best prices on hotels near the Cologne Cathedral
Cologne, North Rhine-Westphalia

Heidelberg Castle
The romantic town of Heidelberg boasts one of Europe’s finest castles. The 600 year-old structure lies along the banks of the Neckar River, and contains styles of both Gothic and Renaissance architecture and design. Heidelberg Castle also plays host to the world’s largest wine vat at 55,000 gallons.

Neuschwanstein Castle
Built between 1869 and 1886 by King Ludwig II of Bavaria, this stunning fairy tale castle sits perched high atop the mountain range near Füssen and is one of the top castles in the Germany. Neuschwanstein Castle has been used as a summer home for royal friends and family including the famous composer Richard Wagner, whose piano still occupies one of the rooms.

The River Rhine
Because of its stunning beauty, the Rhine and its regions are among the most popular travel destinations in Germany. The riverside towns along the Rhine afford ample opportunities to experience German culture. Hiking trails, cathedrals, and cities such as Bonn and Düsseldorf inhabit the Lower Rhine. The Middle Rhine region, best known for its wine production and museums, has long been the inspiration for poets and painters. The area from Mainz to Karlsruhe is home to many of Germany’s castles, historical towns, and the Black Forest.
Sanssouci
Built in 1744 by Frederick the Great, this small palace in Potsdam has traditionally been used to showcase fine and performing arts. Today visitors can roam around the Sanssouci’s 12 elegantly decorated rooms and nearby parks. There are also other historical sites and attractions nearby the palace that make for a full day of sightseeing.
Potsdam, Brandenberg

Marienplatz, Munich
This beautiful square in the heart of the Old Town is home to the town hall and its world-famous carillon (Glockenspiel), which has existed since 1908. The mechanical figures delight the audience on the Marienplatz square below by dancing to chimes at 11 am and midday throughout the year. During Spring and Summer there is an extra performance at 5 pm.

Find the best prices on hotels near Marienplatz

Germany, the land of Gemaechlichkeit and lederhosen invites you to share in its beauty and heritage. Since east and west Germany united, it has become one of the most economically successful countries in Europe.

Germany has several major cities; in each you will experience not only different architectural styles and art treasures but also a very distinctive lifestyle. Local traditions and culture are clearly reflected everywhere – in the arts, the nightlife, the shops, the pubs and restaurants and the way people work and live. Berlin, the capital, has more than 3 million residents and is growing and changing every day, becoming the most modern city in Europe.

Munich, the charming capital of the south is a major center of culture and the arts with 2 opera houses, 45 museums and no fewer than 42 theaters. Nearby Neuchwanstein Castle, is a fairytale castle come-true, complete with turrets.

One third of Germany is covered in forests, while historical cities, alpine villages, castles, and slow moving rivers, abound in this culture-rich country.

There are so many cities and towns bursting with charm and character that I can’t name them all here, but suffice it to say that no matter where you travel in Germany, you will be delighted by the vibrancy and warmth of the German people.

There are more than 30 World Heritage Sites in Germany. Here is a sample of what awaits you in Germany:

Berlin Museumsinsel
(Museum Island) From 1830 to 1930 several buildings dedicated to the arts were built in the island in the middle of the river Spree. Mostly destroyed in the second world war, the site is now being rebuilt and restored.

One of the most important historical sites in Germany, Quedlinburg, is an exceptional example of of a well-preserved medieval town.

The Luther Memorials in Wittenberg and Eisleben remind visitors of the Reformation and the life of Martin Luther.

Wartburg Castle in Eisenach is one of the best preserved castles of the German middle ages.

Emperor Charlemagne began work on a Palatine chapel in 786 in Aachen. This became the foundation for Aachen Cathedral, one of the most important buildings in Europe.

Been dying for a return trip to Germany after many years. Think you've just tipped the scales. Thanks

Hi to all, I was born and raised in München, Germany and left there in 1954 at the tender age of 20. I have learned many things about my home town that I did not know at the time. Every time I go back home for a visit I discover something new. But it just is not the same as it was when I was young but still beautiful. Gert Domber, Nampa Idaho

Hi Michael, I have been to Germany several times and I love the beauty of this country. The people have been warm and generous. My favorite cites are: Berlin, with a day trip to Potsdam. I really love Potsdam, a very historically important city with the beautiful San Soucci.castle. I also love Wurzburg, a vary charming town with lots to see. Regensburg and Augsburg are two small towns that have a lot of history as well as Charm, and Erfurt is an amazing city. I found Dresden beautifully rebuilt to look like it did before the war. There is so much to see, you will never be bored. Read the posts on these cities on our site and you can decide which ones you can't miss. I think that if you are traveling light, hostels are a great way to go in Germany. They are clean and inexpensive. The train system is fantastic; very clean and efficient.

I am somewhere in Afghanistan and am going to Germany for my two weeks leave. My plan is to go very light and do a lot of walking around the country. I would like to see some of the whole counrty, is this doable? What are some have to see spots? I would also like to see the "real" Germany" and its people in the small villages in the countryside. The last thing is about lodging, are the hosstles the way to go or not? Thanks for the input, Mike.