Few places in the world have the utter charm of Zermatt, Switzerland. Tucked into a high valley at 1,682 meters (5,520 feet–almost a mile), and surrounded by magnificent alpine scenery, the little Swiss town near the Italian border cherishes its long mountaineering tradition. 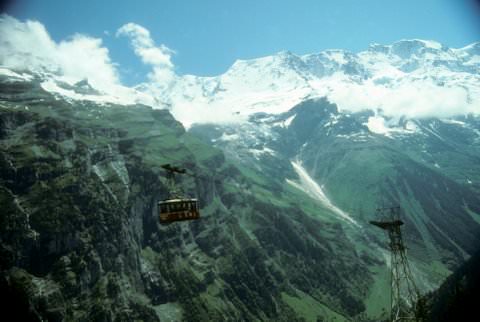 Zermatt was “discovered” in the mid-19th century by British climbers who were eager to meet the challenge of the Pennine Alps, Europe’s highest mountains. Among those peaks are Monte Rosa (Dufourspitze), the Dom, Weisshorn, Lsykamm, and the iconic Matterhorn, each rising above 4,000 meters, or 13,123 feet. In 1865, Edward Whymper, the English illustrator and climber, and his party were the first to successfully ascend the Matterhorn. Four of the climbers were killed in a fall during their descent. The drama of the whole story is on display in Zermatt’s Matterhorn Museum. Gas-burning vehicles are not allowed in the town. A visit here means walking, riding in an electric car, or going by old-fashioned horse and carriage or sleigh. For a fee you can park your car a few miles from Zermatt, outside the village of Tasch, and take a train or bus to town. They make the 11-minute trip many times a day. 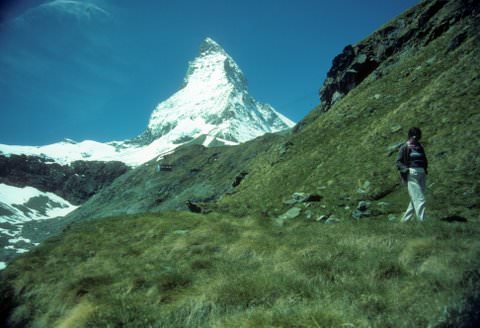 It’s possible to ski and snow-board all year round here, but most commonly in winter and spring, when chairlifts and cable cars travel constantly on the steep mountain slopes. Electronic ski passes make for fast-moving crowds at checkpoints. The longest ski run, over glacial fields and moguls, is from the Klein Matterhorn; its lift is the world’s highest cable car and it is worth the ride just for the incredible views in all directions. Whatever lifts you ride, be sure to take a jacket; it’s always cold at these elevations. One famous ski event is the Triftji Bump Bash, a wild competition held Easter weekend. Zermatt’s regular population is about 5,700, but this freestyle competition brings in some 30,000 people for professional and amateur mogul skiing and sliding, plus a lot of partying. Hiking is also a year-long sport, with more than 30 kilometers of walking paths cleared through the snow, but summertime is my favorite. I take a lift up and walk marked trails down through lush green meadows and forests of stone pine and larch, passing wooden chalets and maybe spotting a marmot, ibex, or chamois. Or I might ride the rack railway, the Gornergratbahn, up to the Gornergrat peak for stunning views of the mountains.  This is the highest open-air railway in Europe. 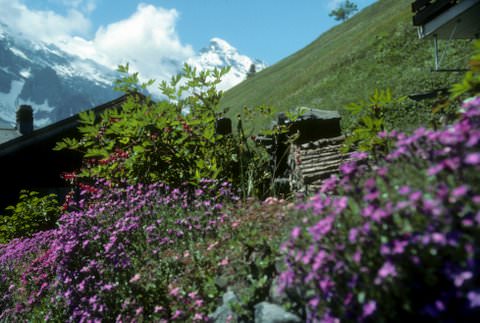 Back in town, I’ll stop in a cozy inn for a cold drink or spiced wine and raclette (warmed cheese scraped from a wheel and served with pickles), fondue, or pizza.  A luscious apple strudel makes a delectable dessert, and a bit of Swiss chocolate is the final perfect touch. Zermatt still has a quaint atmosphere, with its wooden chalets and geraniums spilling from balconies and window boxes, but contemporary glass buildings are moving in to take more advantage of the scenery. Some typical old grain storage buildings remain, standing on stilts above stone slabs designed to keep rodents out. One place unchanged is the well-tended cemetery, with its touching tombstones depicting ice axes, ropes, and crampons of those who died climbing the nearby peaks. Zermatt has scores of hotels, apartments, B&Bs, and inns ranging from top luxury lodgings to simple hostels.  One comfortable choice in the less-expensive category (in summer, that is—the price jumps in winter) is the modern Coeur des Alpes, which has glass walls with marvelous views of the Matterhorn. The service is outstanding. Another great choice is the Hotel Schweizerhof And Residence Zermatt. Located in the pedestrain zone on Main street, this four-star Swiss chalet style hotel has an indoor pool and four restaurants. Restaurants are equally wide-ranging. Try the Whymper-Stube, famous for its fondues, and the Grillroom Stockhorn, serving excellent Swiss specialties. 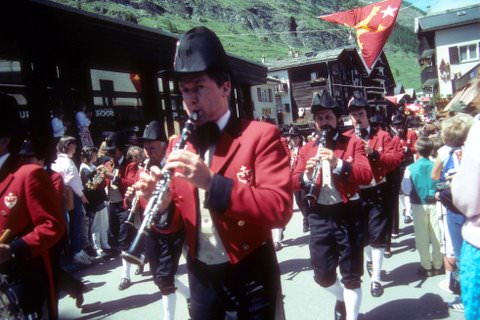 Getting to Zermatt got a lot easier in 2007, when the Lotschberg Base Tunnel opened. This 21.5-mile railway tunnel cutting through the Alps is the longest land tunnel in the world and accommodates cars and vans. It considerably shortens the drive from Zurich. Zermatt loves a celebration. In August there’s a Folklore Parade, honoring the old traditions of Switzerland; the 12.5-kilometer International Matterhorn Run; and the Matterhorn Eagle Cup golf tournament, played on alpine meadows. September brings the Zermatt Festival, featuring world-renowned musicians. These are just a few of the many events scheduled throughout the year. Written by Marilyn McFarlane for EuropeUpClose.com