Wroclaw (pronounced Vrot-swav) is situated on the River Oder ( or Odra) in Western Poland. The Oder branches throughout the city forming 12 islands, which are connected to each other by over one hundred bridges 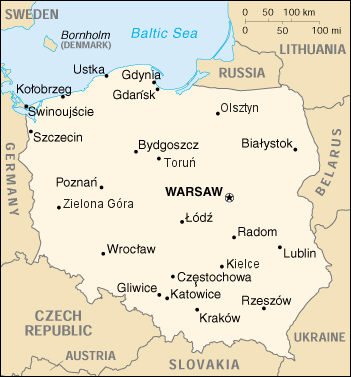 creating a ‘Venice of Poland’. The soaring architecture, romantic river, and overall free-spirited feel of Wroclaw may come as a surprise to travelers who are familiar with the city’s tortuous history of invasion and international power struggles.

Wroclaw has only been part of Poland since 1945 (formerly Breslau of Germany) and most of the city, including its medieval quarter and many churches, was destroyed during World War II.  The efforts over the last few years to restore the city and move forward to a free future are reflected everywhere and animate the city with a sense of new life and energy. 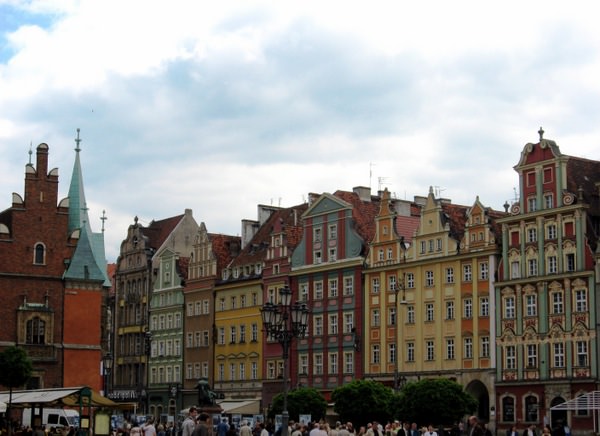 The center of Wroclaw is the market square (Rynek). During my trip, I particularly enjoyed walking around the colorful cobblestone pathways and taking in the unique architecture, as well as frequenting the traditional Polish restaurants.  When traveling to Wroclaw I expected to find delicious foods like pierogi and all the kielbasa I could hope for, but I didn’t know that the Wroclaw Rynek was home to so many fine coffee shops, which served some of the best lattes I’ve had in Europe. In the spring and summer, the cafés open out into the square where you can enjoy the nice weather and street performances. 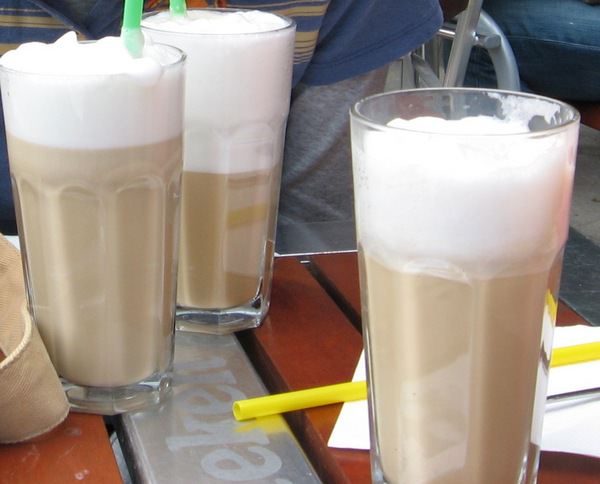 Ostrów Tumski (Cathedral Island) is the oldest part of Wroclaw and is accessible via a bridge next to the magnificent St Elizabeth’s Church (Kosciol Sw. Elzbiety). The church has suffered much damage through the years, but you would never guess it from the solid and imposing external edifice.  The tower is the most prominent aspect of St Elizabeth’s and is open to visitors in warmer weather. 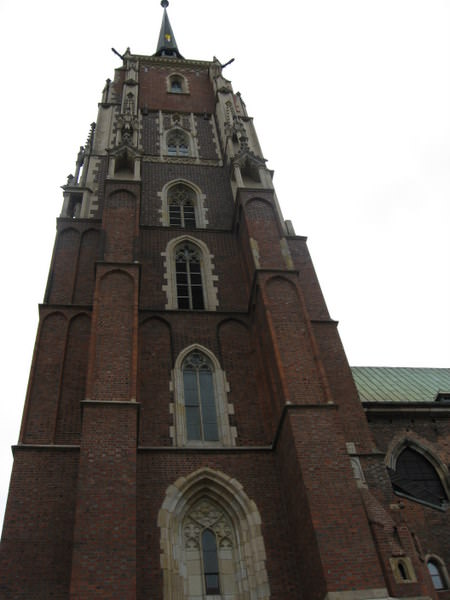 The Tower of St Elizabeth’s

Tours are sometimes not readily advertised and you may have to ask someone for access to the tower when you visit.  The clergy and staff are happy to accommodate curious visitors – I was allowed to climb to the top of the tower, even on a blustery day during the tourist off-season. The climb of about 300 steps up the spiraling stairwell provides a stunning view of Wroclaw’s medieval quarter.

Ostrów Tumski is also home to the Cathedral of St John the Baptist (Archikatedra sw. Jana Chrzciciela; also known as Wroclaw Cathedral). There has been a church on this site since the 10th century, but the current structure dates to modern times. Like most of Wroclaw’s buildings, the Cathedral has seen a lot of action over the past centuries – it was rebuilt several times, ruined by fire and pillage, and almost totally destroyed during the Siege of Breslau near the end of World War II. The church was rebuilt to its former glory in the late 1940s, although some rebuilding has occurred in more recent years. 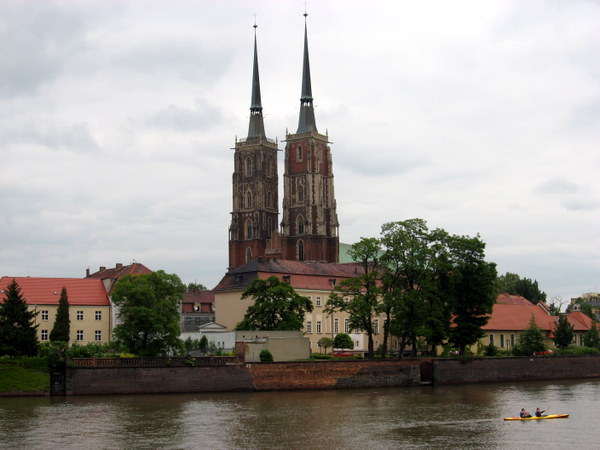 Cathedral of St John the Baptist

Wroclaw has been claimed by many imperialistic kingdoms and countries almost since its founding. On a positive note, this has brought diverse people and layers of culture to the city. However, these invading powers have more often decimated the city. There are many monuments throughout Wroclaw to  commemorate different aspects of the city’s more difficult historical moments. 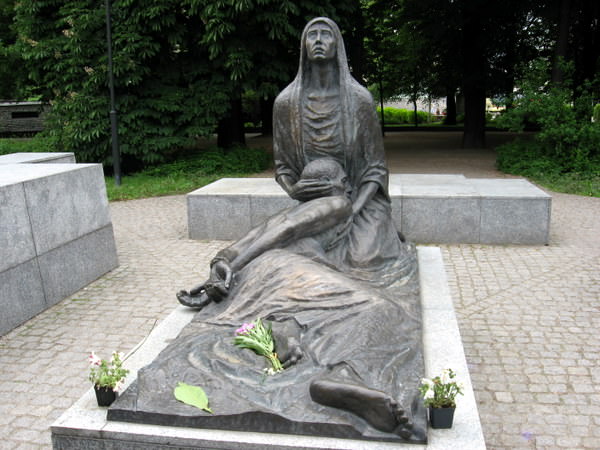 The Monument to the Victims of the Katyn Massacre located in Sowacki Park is a startling and somber sight, which memorializes the 22, 000 Polish POWs, officers, and policemen killed by Stalin in 1940. In the memorial, an Angel of Death holds a sword over Katyn Pieta, representative of the Polish Homeland, who weeps over the body of an executed POW. 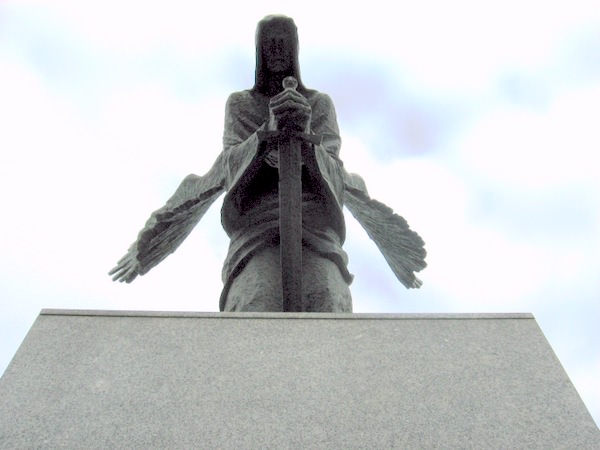 Transition (Przejscie), also known as the Anonymous Pedestrians, is a life size bronze work of various individuals. It descends into the earth on one side of the street and re-emerges on the other side. It memorializes the introduction of martial law by the People’s Republic of Poland from 1981 to 1983 during which many of Wroclaw’s citizens died, disappeared, or were imprisoned without cause.

The Raclawice Panorama is a 19th century painting depicting the Battle of Raclawice, during the Kosciuszko Uprising – a failed attempt to liberate Poland from Russo-Prussian forces in the late 18th century. The Panorama was closed in the decades following World War II, but re-opened in the mid-1980s to mass popular appeal. 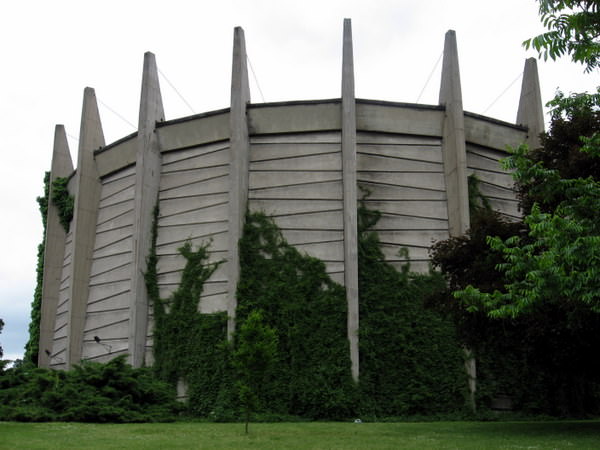 Beautiful medieval buildings and solemn monuments can be seen in any European city – it’s the people of Wroclaw that make this such a special destination. I was fortunate to attend a wedding while I visited the city, which was more like a multi-day festival of dancing, feasting, games, and lots of character (and vodka). 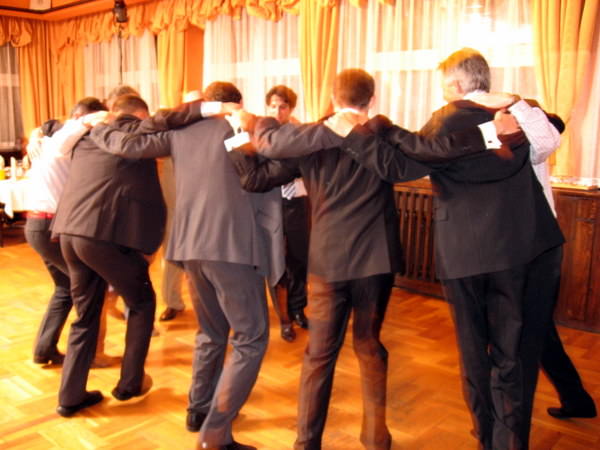 But, you don’t have to attend such an intimate occasion to acquaint yourself with the culture and make some new friends in the process. Go to any café or gathering place and you will find the people of Wroclaw to be friendly and extremely hospitable. 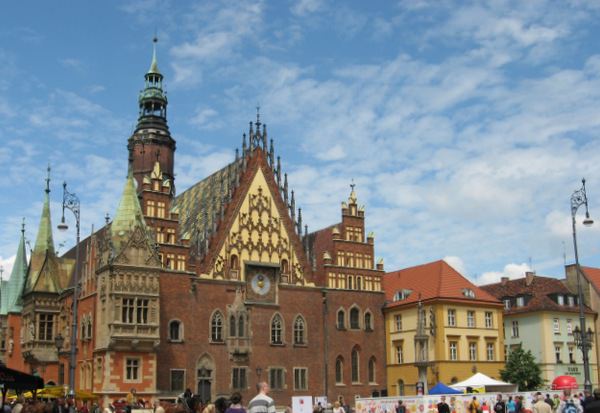 Whether you go to Wroclaw for the gorgeous scenery, the history lessons, or amiable people, you will find this to be an enjoyable and uplifting place at any time of the year. Na zdrowie!

"Wroclaw has only been part of Poland since 1945" Come on! Don't be dilettante.

I always hear great things about Wroclaw and would love to visit it one day. Love all the colourful buildings they have!