The picturesque city of Worcester in Worcestershire, the West Midlands of England, is a modern city with a fascinating past. From its early beginnings as a Roman fort on the River Severn in the first century and down through the ages, Worcester has been noted as an important centre of 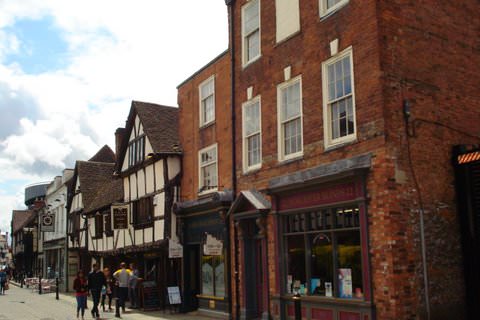 British history. The English Civil War began in Worcester with a skirmish at the Powick Bridge on the edge of the modern-day city and ended nine years later, in 1651, with the Battle of Worcester. It will, therefore, always be known as ‘the place where liberty was fought’.

After attempting to regain the crown by force, the Royalist King Charles II fled Oliver Cromwell’s Parliamentarian troops and hid out in a house now known as King Charles house in Worcester’s Cornmarket. He later escaped through St. Martin’s Gate, and fled to France. Because of its support of the king during the war, Worcester came to be known as “The Faithful City” (Fideles Civitas), a motto which is part of the city’s coat of arms. 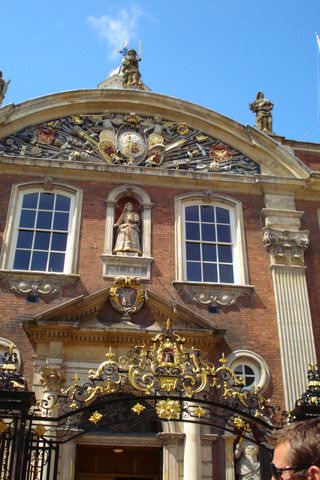 I’ve visited Worcester on several occasions and always enjoy touring around the town. It’s a fairly easy walk to see most of the sights. The city still retains many historical buildings: The Greyfriars, a merchant’s house on Friar Street, is a beautiful timber panel house dating from 1480; The gracious Queen Anne style Guild Hall on High Street, with exhibits inside, was designed by Thomas White, a student of Christopher Wren; And, the Commandery, which has functioned as everything from a hospital to a military headquarters for King Charles, offers an audio tour focusing on the Civil War history. On one of my visits to Worcester I went to the Royal Worcester Porcelain museum where I purchased some samples of this fine china. Worcester is also the home of the Lea and Perrins factory where traditional Worcestershire Sauce is made. Be sure and stop at one of the city’s very old Tudor-style pubs to refresh yourself! 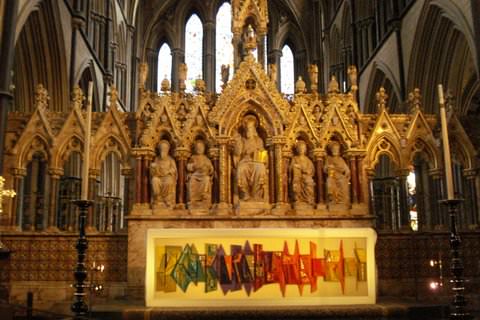 The grandest architectural landmark in Worcester is the imposing Worcester Cathedral which had its beginnings in 1084. Located on the banks of the River Severn, its spires dominate the skyline of the city. The medieval cloisters of the cathedral are among the most remarkable in England. The cathedral has the distinction of having the tomb of King John who is most famous for agreeing to the Magna Carta. During his reign from 1199, he controlled an empire that stretched from the south of France through regions of England, Wales and Ireland. Prior to his death in 1216, he requested to be buried at Worcester. The cathedral also has a memorial to Prince Arthur, the young prince Arthur Tudor whose younger 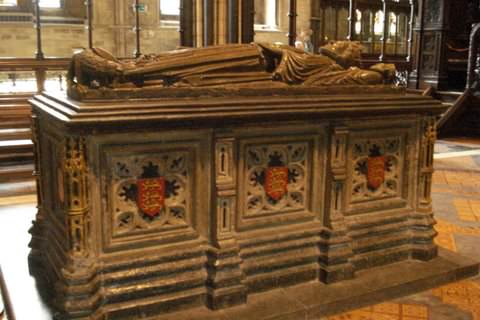 brother was Henry VIII. Because of his chancery in the cathedral, Worcester was spared destruction by Henry during the English Reformation.

It’s a thrill to wander the vast Gothic apse of the cathedral. The composer Edward Elgar spent most of his life in Worcestershire and there’s a stained glass window containing his portrait to commemorate him. Allow yourself plenty of time to explore, including the Norman crypt and unique chapter house. The church represents various styles of English architecture from Norman to Perpendicular Gothic. I’ve had the privilege of 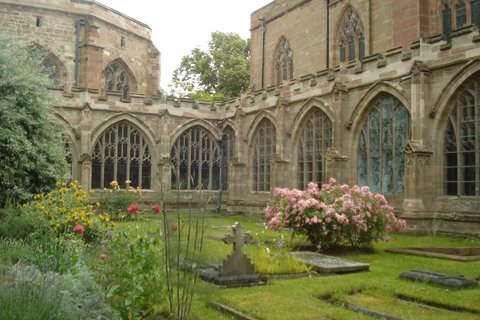 being shown around the cathedral several times and also browsed in the gardens with my cousin who is one of the cathedral’s chief gardeners. There’s a gargoyle high up on one of the towers that was made to commemorate his years of service at the cathedral.

There are other places of interest to visit near Worcester including the Cotswolds, Warwick Castle and Stratford-Upon-Avon.