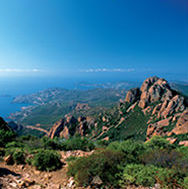 as quick stops on my way to Cannes. Luckily, one day I went to Saint Raphaël to meet my sister who was coming down by bus. We ended up eating lunch there and spending several hours wandering the city’s cobblestone streets. On the way home, we stopped in Fréjus and were equally charmed. Needless to say, I returned to each city several times throughout my stay in southern France.  Here are my recommendations for things to see, do and eat in each city: 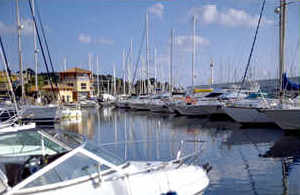 There are many reasons to visit the seaside city of Saint- Raphaël, not least of which are the bountiful markets.  To stock up on fresh fruits and vegetables, flowers, cheese, breads and other artisanal products, head to one of Saint -Raphaêl’s many food markets held every morning at Place Victor Hugo and Place de la Republique, every Monday morning at Place Boulouris (in front of the post office), and every Wednesday morning in Place Giannetti.

In the fascinating Vieille Ville (old city), you’ll find the Eglise des Templiers, a well-preserved12th-century church. In the courtyard you can see ruins of a Roman aqueduct that once brought water from Fréjus. Near the Eglise des Templiers, you’ll findthe Musée d’Archéologie Sous-Marine (Museum of Underwater Archaeology), home to an impressive display of anchors, ancient diving equipment, and other maritime paraphernalia. Many of these objects are from a sunken Roman ship discovered by Jacques Cousteau just off the coast of Saint-Raphaël.

Be sure to take a stroll down one of the wide promenades on the seafront. Wind through pristine beaches and world class hotels until you come to the large pyramid commemorating Napoleon’s return to France from Egypt (Avenue du Commandant-Guilbaud). 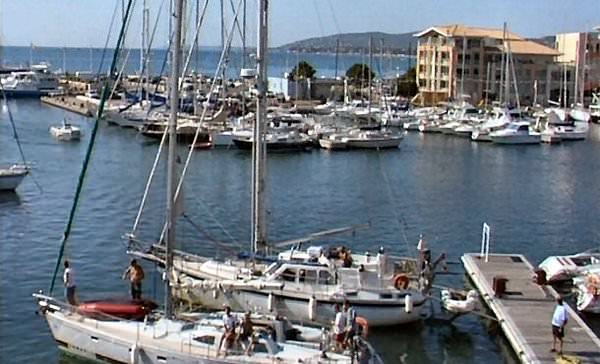 Fréjus’ collection of Roman ruins draws visitors from around the world. The Amphithéâtre (Les Arènes), held up to 10,000 spectators in Roman times. Today it is a venue for concerts and Spanish-style corridas (bullfights). Just outside of town, you’ll find the Théâtre-Romain. Though not as well-preserved as the Amphithéâtre, the lower section is also used for several concerts throughout the summer. To the northwest of the theater, it is possible to see the remaining sections of the 25-mile aqueduct that used to transport fresh water to Fréjus’s water tower.

After your Roman expedition, I recommend heading to Les Potiers for reasonably priced, fresh Provençal fare. Their crayfish ravioli with ricotta cheese and hazelnut oil is an absolute dream.
135 rue des Potiers

I've always wanted to travel around southern France, and now even more! It sounds so charming and relaxed.