While many travelers to Italy are very happy to stroll the streets of Florence, get lost in the maze of Venice, or tour the ruins in Rome, those who want to explore a beautiful, lesser-traveled region of Italy would do well to visit Trento. Nestled in the Adige river valley and surrounded by the Dolomite mountain range in the lower Alps, this city offers visitors a fascinating mix of Italian and Austrian culture (at one time this region was part of the 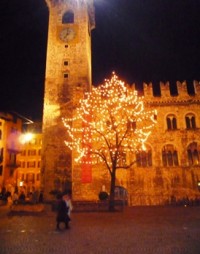 Austrian Empire). It’s also very well-situated: Trento is only three hours by train from Florence and just over two hours from Venice. Not only will the city’s fusion of Italian and Austrian architecture impress you, the majestic natural landscape will take your breath away. Here are just a few places to visit on your trip to Trento.

Luckily for the pedestrian tourist, the city center of Trento is rather small, so you can easily take in the sights on foot. A good place to start is right in the heart of the city at the Duomo—or the Cathedral of Saint Vigilius. The church towers over the historical city center so it’s easy to find. This 12th-13th century church has a rich history. You have probably heard of the Council of Trent, which was a council established in the 16th century to counter the effects of the Reformation. It is said that meetings of the Council of Trent took place here in the church’s presbytery.

After admiring the church’s 14th-century frescoes, walk out onto the adjacent Piazza Duomo and notice the fountain of Neptune in the center. There are bars right on the square where you can stop for a quick caffe. It’s likely that you won’t hear many English speakers in the cafes and restaurants, but in general the staff will speak at least some English.

Also, right in the piazza is the Museo Diocesano Trentino, which gives you a glimpse of medieval Trento with its sculptures, paintings, and liturgical vestments (clothes) worn by diocesan priests from the Duomo.
In the narrow streets in the center, you’ll find every kind of fashion shop to suit your taste. Even if you don’t want to spend a fortune (it can be expensive), it’s fun to look. You’ll also notice plenty of bookshops, where you might pick up a calendar or some postcards.

Be sure to visit the 16th-century Church of Santa Maria Maggiore, not far from the Duomo. The church is constructed with red and white stones from Trento and is another site of the Council of Trent’s meetings.

Trento doesn’t have only historical monuments and art to offer. Just down the street from the Piazza Duomo is Trento’s excellent contemporary museum, the Galleria Civica d’Arte Contemporanea (The Civic Gallery of Contemporary Art). Here you’ll find paintings, videos, and installations by local as well as international artists. Yoko Ono exhibited here in 1995. 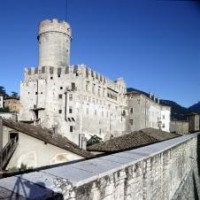 If you’re too tired to walk, it would be worth your while to take a bus to the Castello del Buonconsiglio, just north of the center. This 13th-century fortress is now a museum. Take in its extensive gardens, the Gothic frescoes in the Torre dell’Aquila (“Eagle Tower”), the frescoes that line the Loggia, as well as the ancient, medieval, and modern art collection.

If you have kids, they might appreciate the Museo Tridentino di Scienze Naturali, Trento’s natural history museum. Until May 2009, the museum is offering a fun interactive exhibit about the polar bear. Kids learn about the climatic conditions in the Arctic and Antarctic and what it takes for a polar bear to survive.

And finally, to appreciate Trento’s Roman history, walk over to the Sass Underground Archaeological Area to view the ruins of what was once the Roman settlement “Tridentum.” Here you can see a street, part of a wall, and the remains of a tower.