Winter is a fine season to visit Venice. Finally, I get to mingle with actual Venetians, to rub shoulders with them on numerous vaporetto rides along the canals and to the islands and to haggle amongst Venetians over delicious fruit and vegetables at the markets at the foot of the Rialto bridge.

20 Top Things to Do in Venice 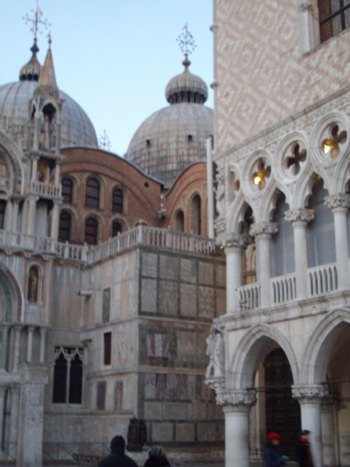 I am warmly welcomed in mom and pop shops, deep in the alleyways, when I enter and inquire about the displayed, multi-colored and wildly twisted pasta that I have never before seen. I can enjoy a cappuccino and sinful chocolate cake at the famous Café Florian without having to stand in line. Yes, it feels good to be surrounded by chic locals whiling away the day and having their own good time.

It may be a bit chilly and it might rain occasionally, but that’s nothing a warm coat, boots and an umbrella can’t cure.

>> Take a look at our Winter Packing List for Europe here

Add to this the advantage that during the winter hiatus prices for hotels drop considerably and the shops offer discounts and sale prices; and Venice, before the crowds descend again for carnival in February, is a winter destination par excellence. Of course, more than a few knowledgeable tourists and visitors are around, which means that all the sites, museums  and attractions are open.

My home away from home for four days was the aptly named Hotel Serenissima in Calle Goldoni, half way 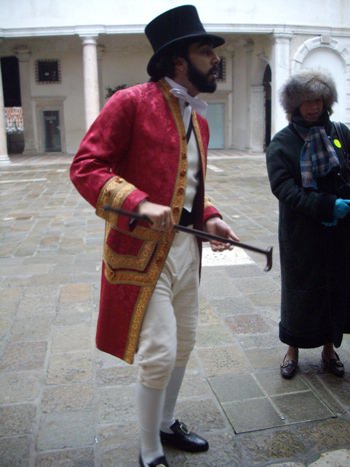 between the Rialto stop where the vaporetto from the airport dropped me and St. Mark’s Square. A lovely four story town house, and family run, Hotel Serenissima is a low-season bargain at 81€ for a single including breakfast and taxes.  Two things require particular mention: a) free and working wifi in your room and, b) breakfast. The owner, herself, greets you in the first floor breakfast room by name and with a big smile, huge coffee pot in one hand, hot milk in the other. She then rushes off to heat your choice of flaky croissants, toast and other delicacies. If you must, you can have tea, but…

Thus fortified, I made my way to St. Mark’s Square. My eyes fell on a notice board which announced:  ‘Murder and Mystery Tour’. Fabulous. In the city with a history full of conspiracy and intrigue, I couldn’t have asked for more. The tour started at 5pm and cost 20€. I bought my ticket and returned at the appointed hour.

The group, which assembled near the ticket office, consisted of just six eager souls; three Italians, an American, a French lady and myself. We introduced ourselves to each other and agreed on English as a common 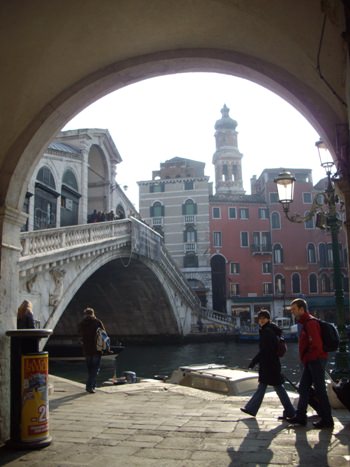 language. Now, where was our guide? As if on cue, a figure right out of a Goldoni play literally jumped into our midst. Our guide, a young actor as it turned out, a native of Venice, in full period costume quickly set the scene. Twirling his walking stick he promised us secret alleys, anecdotes and mysteries. And he did not disappoint. At a quick clip, he led us deeper and deeper into the side streets of Venice. We followed over bridges and across squares while our guide, in the most dramatic fashion, pointed out secret doors in palaces which were used by the gentleman or lady of the house to conduct illicit trysts. He showed us a balcony over which ghosts threw a greedy man into the canal after murdering him. Over and over again, our guide recounted stories of Casanova gambling and carousing with his friends or hiding in this house or that after seducing various women. The stories are too many to be told here, but they were entertaining and fascinating and so were the out-of-the-way parts of Venice we saw. The tour was, of course, made even more dramatic by our guide’s play acting.

After two hours and in tune with the theme of intrigue and mystery, he raised his stick and declared: “Ladies and gentlemen, this is where our tour ends! ” Lord, where are we, I thought? I had no sense of direction and felt somewhat disoriented. Looking around, I found myself in front of the Ospedale Civile, quite a distance from St. Mark’s Square. 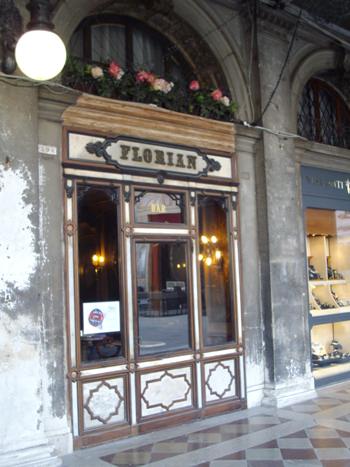 By now it was dark and our little group had quickly dispersed. I thought: let’s see if I can’t get a private tour back. As our guide prepared to slip away, I asked him if he was returning to St. Mark’s Square. He was. Could I go with him? “But, of course.” And thus started my second tour, even more entertaining  than the ‘official’ one. He told me about his acting career, about the art scene in Venice and then asked me if I was hungry. We entered a tiny trattoria, shared a couple of delicious ham and vegetable sandwiches, a few glasses of wine, followed by a grappa and then we parted company at the Café Florian.

The tour was a most enjoyable experience and an entertaining way to see Venice. Make sure to wear comfortable shoes and bring a map so you can find your own way back if ‘abandoned’ at the end of the tour. You can get lost in Venice, but on the other hand there are signs everywhere which direct you towards either the Rialto Bridge or St. Mark’s Square. Although, from time to time, the signs seem to point in opposite directions. This suggests either the long or the short route, but you’ll eventually end up where you want to go.

Oh wow. I didn't know Venice offered these kinds of tours. How awesome! I'm so hoping we get to either set sail from there, or wind up there when we take our Mediterranean cruise. Really want to see it!

This was so great to read. I went to Venice in the end of May 2011 and had a much different experience. It was packed to the brim with tourists, I don't even think I tried standing in line for coffee. But it was probably my favorite spot on that trip. I will definitely consider going in the winter next year.

Venice is on my list of must-see places. Your article makes me consider winter as a viable option.  Great post - an unusual take on a oft-written topic.

Ooh, winter in Venice... so mysterious and misty. The murder tour sounds fabulous!

It's so nice to tour without the hordes of tourist, when I was in Rome last year I toured most of the city by night and it was beautiful! Will see Venice the next time I go.