I’m in Vaduz, Liechtenstein on a whim. When I was 15, I spent about an hour here, mostly for a quick look and to get a passport stamp. It was one of those places where I could say I had been, but not really seen. Somehow, that didn’t feel right. I had no basis for forming an opinion about Liechtenstein or its capital. 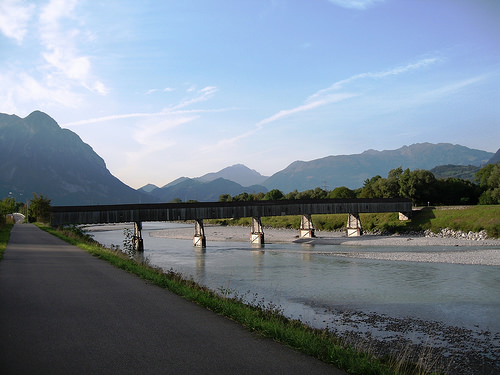 Vaduz, the capital of Liechtenstein

The country of Liechtenstein is headed by His Serene Highness Hans Adam II von und zu Liechtenstein, who resides in the fairy-tale 12th century castle, Schloss Vaduz, perched on a hill above the capital. Special talents of the tiny country’s 32, 000 inhabitants: making money – billions of it every year.

As I amble along Städtle, Vaduz’ diminutive main street, I spot several large torches. Their bright, warm lights draw me in to a small plaza – Kunsthausplatz, where Café Nexus beckons with laughter, music and lively Liechtensteiners. The men look handsome in tailored suits and the women wear pretty sandals and jewelery. It’s obvious – though not in a flashy way – that this is a wealthy town. They seem very social; a table meant for two is easily shared by four times as many, sitting close and easy. There’s something relaxed, almost Mediterranean about the atmosphere. 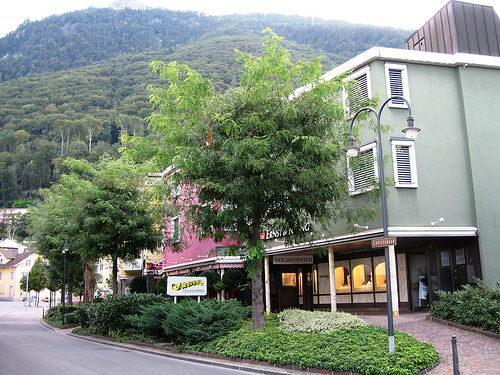 Next to Café Nexus is a chic outdoor bar with sleek black leather sofas and matching footrests. One man has his feet up, jacket off, tie loosened. With documents in hand, he has a laptop, a mobile phone and a frothy glass of beer in front of him. On the next sofa, two women have their heads close together and beers in hand. They seem to be discussing a spreadsheet; business, but no stress.

On the hill above, Schloss Vaduz looks a little spooky, lit up against the evening sky. The castle is not open to the public, but photos reveal a rustic and comfortable, rather than ostentatious, home.

Strolling along the river early next morning, I pass a fabulous, old, wooden covered bridge – for walking, biking and horse riding only. As I cross, the wooden floorboards squeak ever so slightly. Every few metres, vents offer glimpses of the River Rhine flowing beneath. About halfway through, a white metal sign announces I’m now on the borderline; Liechtenstein is to the left and Switzerland to the right. Childishly, I hop across the border a few times: Now I’m in Switzerland, now in Liechtenstein. 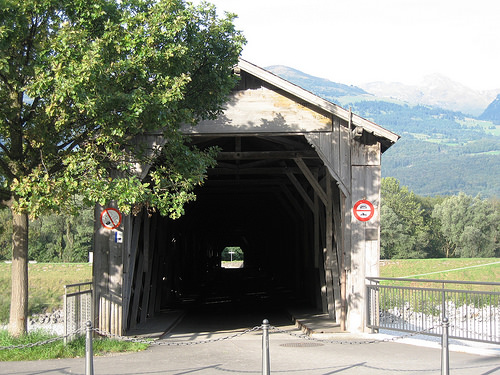 Later, I discuss the bridge with some recently arrived Australians I met at a terrace café along Städtle. One man and three women, none of them are under 70. They laugh, tell frisky jokes and are obviously having a good time. I suggest they go see the covered bridge, and wouldn’t it be romantic to kiss on the border line. They immediately agree, giggle mischievously and set off for the Rhine.

Visitors to Vaduz typically stay for an hour, if that. They get the obligatory passport stamp (for sale at the tourist office) and have a quick look around. Most don’t venture further into the interior and conclude Liechtenstein is a slightly dull destination. 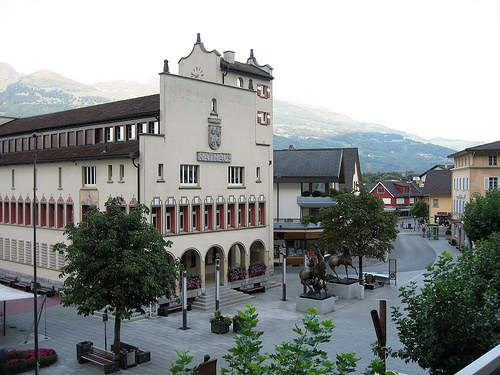 I disagree. Vaduz is an agreeable little capital with a stunning location and kind, cheerful people. And who am I to blame a country for focusing on what they do best, even if in this case, it’s making money.

Thanks for the comments, everyone :)

@Christian: I'd recommend staying in either Triesenberg or Malbun. Triesenberg is a charming, tiny village, just minutes by bus (or a short hike) up the road from Vaduz. Malbun is more of a resort, but on a Liechtenstein scale, i.e. tiny - and lovely.

Really liked this article as I don't see much travel info about Liechtenstein. I'm thinking about going and also see the mountains. What's a nice place to stay there?

Agree. Liechtenstein is a lovely little country with the friendliest people.

Really glad to see this. I liked Liechtenstein, too - and think it's highly underrated, esp. the mountains.