Due to a strange, yet fortuitous, turn of events during a trip to Greece, I found myself in Istanbul, Turkey for two days with some of my favorite travel companions: my parents, sister, and our beloved grandmother. My father, who didn’t have many opportunities to travel in his younger years, is perhaps the most joyful and respectful

traveler I have ever met. In his quest to “soak it all in,” he never wastes a moment. No sooner had my sister and I flopped our suitcases on our beds when we heard a knock on the door and Dad’s voice (full of tireless enthusiasm) asking “You guys want to go for a walk?” 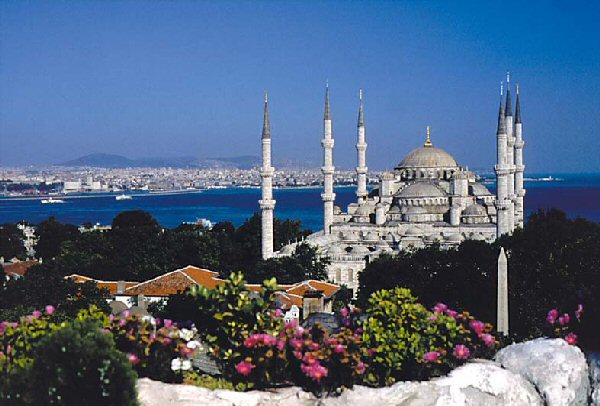 As we stepped out onto the stone sidewalk in Istanbul’s Old Town at dusk, we heard the call to prayer from a local Mosque. There was a quiet, pulsing energy in the air as locals made their way home from work. As a linguist, hearing Turkish spoken was a rare treat. The lilting and authoritative tones blended perfectly with the mysterious, yet comfortable surroundings of the neighborhood around our hotel.  It is these ordinary moments while traveling that I like best; these are the ones that stick in my memory and make me feel truly connected to a place, even if I have only spent a few hours there.

The next morning, we visited Istanbul’s Grand Bazaar (Kapali Çarsi, or Covered Market). Armed with a wallet full of Turkish lira and accompanied by four rabid shoppers, my father took on the unenviable task of trying to keep up with us (and avoid getting pick-pocketed, a common occurrence in the Bazaar) as we wove through the crowds of tourists. Istanbul’s Grand Bazaar is overwhelming (in both the best and worst senses of the term) because of the myriad beautiful Turkish products one can purchase (carpets, glazed tiles, pottery, copper and brassware, leather goods, textiles, alabaster boxes and ashtrays) and the sheer number of shops and people. The nearby Egyptian Market, known for its large variety of spices, is a bit less intimidating and incredibly beautiful, allowing for a more relaxed experience, depending on the time of day. (Note: the Bazaar and Market are both closed on Sunday. They also typically close at noon on the day before major Islamic holidays. And yes, bargaining is expected at both!) 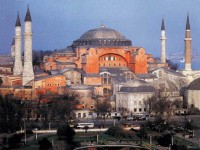 That afternoon we toured Istanbul’s most famous sites. Our first stop was the Hagia Sofia, a former patriarchal basilica, which then became a mosque, and now is a museum. It is considered the epitome of Byzantine architecture and boasts one of the most innovatively designed domes in the world. We continued on to the Aqueduct of Valens, which was built in the reign of Valens (368 A.D.), and is still in use. During our tour of part of the massive system of

subterranean pipes and above ground arches, we learned that this two-story aqueduct spans the lower ground between the third and the fourth of the city’s hills. Our last stop of the afternoon was the Sultan Ahmet Mosque (Blue Mosque), with its impressive dome measuring 43m/141ft high, 23.5m/77ft in diameter and six majestic minarets.

Though we only spent two days in this fascinating city, I can easily say that, in all my travels, it was one of my favorite destinations. Throughout my time there, I felt like I was peering into an ancient jewelry box full of rare, complex treasures– occasionally blinded by intense flashes of culture, and overcome by an intense desire to keep digging deeper, to reveal forgotten gems of history that would shed light on contemporary Turkish realities.

Istanbul is a fabolous place

I think you need at least 4 days...last time I had a guide with me and he showed me all the intersting spots including a few palaces,a couple of mosques,some tombs of sultans, cistern,sophia and a lot more...and I am happy to recommend him to anyone going to istanbul.

I agree with the previous comments 2 days is not enough to appreciate what Istanbul has to offer. Fascinating place. I loved the ferries, the underground cisterns, the smells and the calls to prayer. I would have loved to have stayed even longer than the 5 days I had and went to Gallipoli.

Thanks for your comment, Anil. I agree- I hope to get back to Istanbul again in the near future. What would you recommend for sights, restaurants, etc.?

Good/strange luck :) But you're right, you've only scratched the surface...but Istanbul is like that. You keep peeling back the layers and it doesn't seem to end.