Known best for it’s banks, chocolate, and cuckoo clocks, Zurich, Switzerland, has a culinary culture that is sometimes overlooked. On my last trip I asked my Swiss friends to take me out and show me the traditional cuisine of Zurich. It was so good we indulged twice, once for Weiner Schnitzel and once for Fondue.

Zurich is a precise and industrious town. For example, it is quite uncommon for a bus or train to be late. Located on beautiful Lake Zurich, walks around the city can take you past the contemporary architecture of fifty museums, to quiet parks overlooking the river, or into stunning churches with elaborate, powerfully colorful stained-glass windows. The old part of the city, known as the Altstadt, is the best place to find traditional dining and many of the large dining halls and pubs offer good prices. 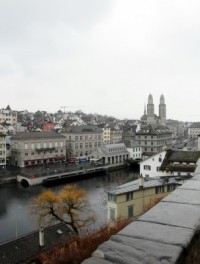 My friends took me to a restaurant in the Altstadt with beer-hall-style dining that featured great house-made dark beer. The menu featured sausages of all kind as well as Weiner Schnitzel. Weiner Schnitzel is technically an Austrian dish, but has a long history in Switzerland, which borders Austria. In its basic form, Wiener Schnitzel is a thin steak of veal pounded very thin, breaded, and fried. It is possibly the inspiration for chicken fried steak. The Swiss version of the dish is called Cordon Bleu Schnitzel, and is two pieces of veal stuffed with ham and cheese and then breaded. Mine came over a large portion of rustic fries. 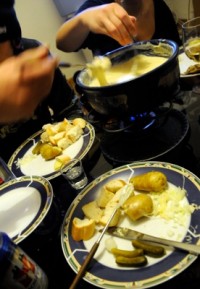 Switzerland is the land of Swiss Cheese, and just as importantly, fondue. Fondue comes in many forms, including chocolate. It’s most common form is made with Gruyère and Emmental cheese, combined with kirsch, a strong fruit brandy distilled from cherries. It is served in a large earthenware pot over a low flame, and long skewers are used to dip bread into the cheese. 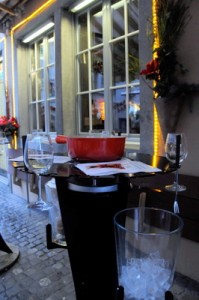 My friends and I made fondue at home, however many of Zurich’s restaurants specialize in the dish, and many offer tables specially designed to serve the dish with substantial pots in the middle. My friends pulled out their own large clay fondue pot, and I discovered that we’d be dipping more than bread. As my friends melted the cheese, they said that they do not add the kirsch directly but serve it in shot glasses on either side of the fondue pot. The idea is to dip the bread in the alcohol before dipping it into the cheese, that way you can have more control over how much you want.

With fondue, you can dip anything you like of course, but for some reason I’d never thought of potato. With the potato and chunks of bread my friends also served boiled pearl onions—so good! However, my favorite  was the diced onion that you rolled your cheese-covered potato in, right before popping it into your mouth. Tiny Gherkin pickles were also served to accompany the fondue.

As a finale to the meal, I learned that the tiny bit of cheese at the bottom of the pot—usually where the flame directly hits—is the best part of the dish. In my book, it’s hard to beat fried cheese, and it was a satisfying finish to a delicious night.

i currently live in zurich and i have to tell you that there's a much better place for traditional fondue: fribourger fondue stuebli - https://www.fribourger-fondue-stuebli.ch (no english version available). it is located in rotwandstrasse 38 / zurich - be sure to reserve a table! find more tips for zurich on my blog: https://chocoluxe.blogspot.com/search/label/Zurich

Zurich was by far the best city of my 5 months travelling. I could have moved there! Swimming in Lake Zurich was ace and I particularly loved the walk up to the Dolder Grand Hotel...wow that was incredible!!!! Also make sure to visit the Rhine Falls which are only about a 45min train ride away...you can even swim in the Rhine River and jump off Swiss WW2 bunkers into the river!!!

That's embarrassing! Thanks for the facts Ralph. The hike up Uetliberg is beautiful. I did it in the winter (as you can probably tell from the first photo) and got snow in my shoes, but it was still fun. ---Mattie

Thanks for the clarification and the good information.Sorry we didn't catch that!

Zurich is NOT the capital of Switzerland, it is the largest city, buy BERN is the capital. For a terrific hike and a wonderful view walk up to the Uetliberg, with a good restaurant on top and a tower for an even greater view. Take the tram to the Albisguetli, it's about an hours hike to the top. Did you know that four languages are spoken in Switzerland, asccording to where you live? And that Zurich has been found to be the safestest city in all of Europe by experts from 89 nations?